In search of ice and fire: Europa analog fieldwork in Iceland, 2018

This summer, I found myself standing on a glacier in Iceland, catching my breath, and staring upwards into a gray void. It was late in the day, and fog was descending over the icy volcano Kverkfjöll, obscuring the summit still more than an hour away above us. Ahead and behind were other members of our seven-strong climbing team, dimly visible in orange safety vests, strung out along 200 feet of climbing rope like holiday lights. I was there with a NASA-led team of astrobiologists sent to Iceland to study Jupiter’s moon Europa. Why go to Iceland to study Europa?

Previous missions to the Jovian system have shown that Europa has a young, mostly icy surface. At first glance, it appears smoother than its siblings, Callisto and Ganymede, which are pockmarked with numerous craters accumulated over many millennia. Close up however, Europa tells a different story. It is scored by vast curving cracks that extend more than hundreds of miles. Some of these ‘cycloids’ are red-dyed, indicating probable mineral presence, perhaps salt water that has discolored on exposure to space. In other places, known as chaos, the surface is a jumbled-up jigsaw puzzle, where vast rafts of ice have apparently lifted up, rotated, and frozen back together again in bizarre patterns. All of these clues point to liquid water in an ocean somewhere inside, that can break through to the surface in different ways. And where there is an ocean, there may well be life…

These tantalizing clues were the impetus behind the Europa Clipper spacecraft, currently under development at NASA’s Jet Propulsion Laboratory for launch in the early 2020s. While Clipper will conduct the most in-depth reconnaissance of Europa to date during 45 close flybys, characterizing the tenuous atmosphere, surface and subsurface as never before, it is not designed to detect life. A planned follow-up mission, the Europa Lander, will go one step further, landing on the surface and drilling or scratching to provide ice samples that may contain more definitive ‘biomarkers’, possible indicators of life. Even Lander can't guarantee a robust answer: it may land at a barren spot. Or, the evidence of interior ocean life that reaches the surface, such as organic materials, may be too degraded or eroded for Lander to make a definite pronouncement. In the presence of so many uncertainties, NASA is keen to send the best instrument suite possible.

The terrain of Iceland – the “Land of Ice and Fire” – has some very interesting similarities to Europa. The south-eastern quadrant of the island is home to Vatnajökull, the largest ice sheet in Europe. Lurking beneath, like hidden furnaces, are multiple volcanoes that heat the ice, creating subsurface lakes and pockets of water. These are enriched with sulfur and other minerals, adding a variety of nutrients that can support life. To make things even more interesting, much of this tasty mineral soup is accessible for study in places where it bursts through the surface at geothermal springs. In places where the springs are surrounded by ice, we find a possibly Europa-like juxtaposition of heat, water, abundant mineralogy and an icy regolith.

Our goal was to characterize signs of life in Iceland’s glaciovolcanic areas — places where volcanism interacts with surface ice – to improve NASA’s ability to develop instruments for the Europa Lander. In this respect, we label Iceland as an “analog environment” – a place that resembles the one we want to study (Europa) but can’t yet reach. Our team of six scientists and one public engagement specialist brought a host of instruments to study the various terrains we would encounter. Our principal focus was the ice-covered Kverkfjöll volcano, home to many diverse geothermal areas. What follows is a brief glimpse into two of our key field days. 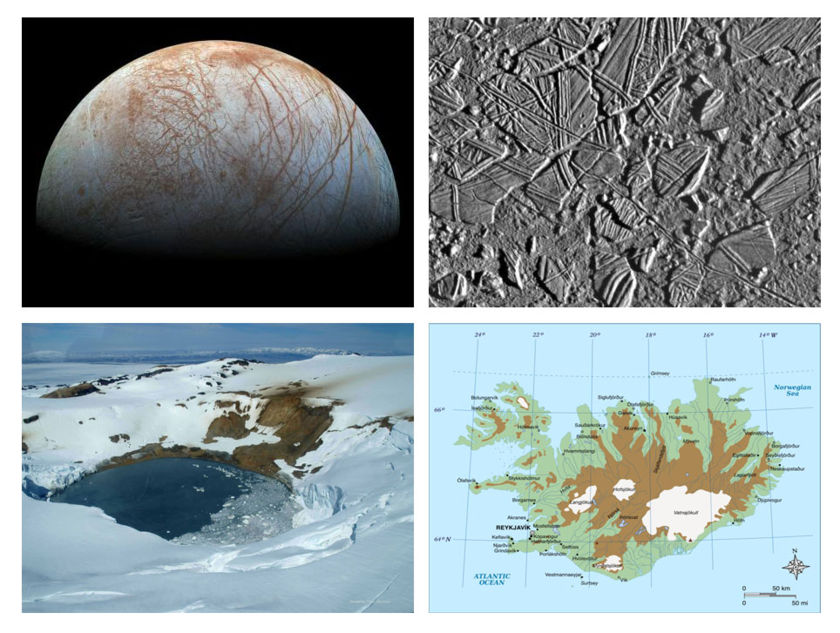 Clockwise from top left: Europa seen by the Galileo spacecraft; close-up of the Connemara Chaos region; map of Iceland showing the giant Vatnajökull ice cap in the southeast quadrant; the summit of Kverkfjöll on the northern edge of Vatnajökull.

We had spent a week in Iceland checking our gear, and conducting science investigations on lowland lava fields, that we would later use for comparison to the glaciated environments – and had now reached the glacier itself. To start with, we opted for a half-day hike onto the glacier to get experience walking on, and working on steep ice. Our field team was chaperoned by two incredible Icelandic guides, Sigrün and Styrmir (the blue and green jackets in the picture above). They brushed up our crampon technique and kept a watchful eye on our activities to keep our team safe and ensure we abided by the “leave no trace” field work philosophy. It was my first time on a glacier and I was surprised at how complex the surface was. Perhaps I expected a smooth icy river, but what I encountered was a heavily fractured and dirty surface. My thoughts returned to Europa with its cracked and colored surface: clearly, we were on the right track.

We divided into groups for this first day of work. Aaron Regberg (NASA Johnson Space Center) teamed up with Jennifer Eigenbrode (NASA Goddard Space Flight Center), who together conducted ice sampling using a half-meter auger that had been sterilized beforehand. They also wore sterile, laboratory clean suits to prevent any sample contamination before sealing the precious ice samples in a freezer box. Two University of Maryland scientists, Dina Bower and Tilak Hewagama, conducted close-up Raman spectroscopy. This technique uses a laser to probe the regolith (ice and sediments), and measures the colors of the scattered light to determine mineral and organic content. Both these experiments were chosen to mimic activities that Europa Lander will perform. Meanwhile, I documented the physical properties of the site, using infrared photography, GPS labeling and metering water properties in the melt pools.

Our first day was a success: we’d accomplished all that we’d set out to do in less time than we’d allocated. We’d established that our instruments and sampling gear were working, and collected valuable reference ice measurements and samples. The next day would prove much harder. 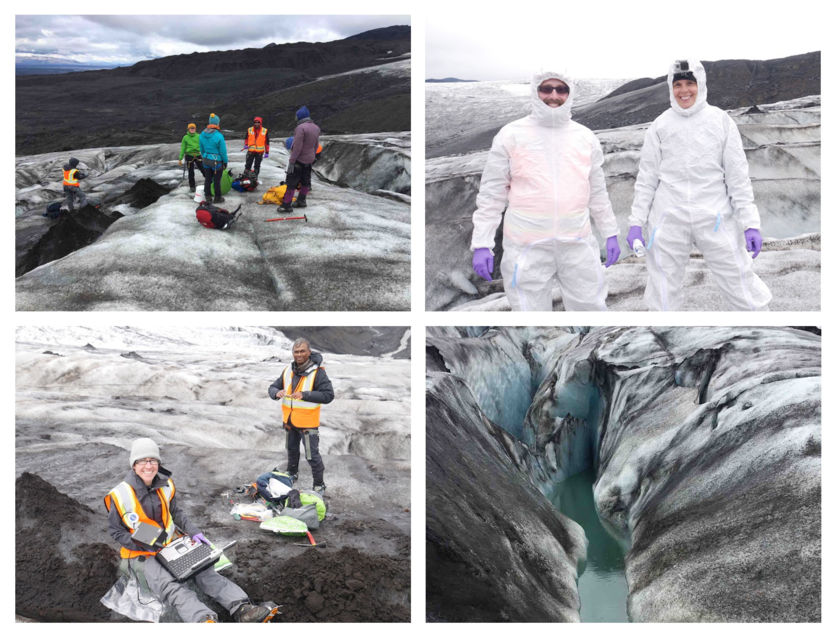 After our successful first sortie, we were ready to explore the geothermal areas at the volcano’s summit. Our UK collaborator, Claire Cousins of St. Andrews University, warned us that Icelandic weather could be very unpredictable. Now our guides were confirming this, sadly informing us that the weather would likely be bad for the remainder of the week, exceeding the several days that we’d budgeted for contingency time. We would have only one chance to reach the volcano summit, on Sunday, August 5 before the weather shut us out. We had also been cautioned by our guides not to underestimate the length of the hike ahead of us - 8 to 10 hours round trip to the summit — for strong hikers in good weather.

Soon the volcano proved that it wouldn’t yield its secrets easily. One problem was the ice quality. Since some areas of the glacier had melted away over the summer, we had to take a more circuitous, and longer, route. It was a harder slog than we anticipated, and with our equipment-laden packs we were making slower time than a typical, less-encumbered hiking group. By 4:30 p.m., we had been climbing for more than 7 hours, but were still an hour or more away from the summit geothermal areas. A fog was closing in, and there were more crevasses than our guides anticipated, slowing our progress further as we gingerly crossed them one at a time on tight lines.

We had reached the point when hikers were usually already descending, and we hadn’t yet reached the top of the glacier. If we persisted we would arrive in early evening, hours behind in beginning our science measurements, and inviting a long descent in the dark, or else an unplanned bivouac at the summit. It was a difficult moment, as we knew that we wouldn’t get another chance to reach the geothermal areas this year, but there was only one choice to make. Reluctantly, we took some parting photos and turned around to head downslope towards warmth and rest.

We had learned a lot on this trip, including how to work together as a team on the ice, and assist with each other’s science experiments. We had collected valuable samples of ice, rock and sediments, despite not reaching our ultimate goal at the high geothermal site. (Later, one of Icelandic friends, who wrote his PhD dissertation on the Kverkfjöll region, would tell me that it took him “four or five attempts” to finally get the data he wanted.) Our conversations with local guides and scientists had given us important insights into other ways we might access our destination in the future. We were returning with data to publish and samples to analyze. Already on the return flight, we promised: Iceland, we will be back!

We look forward to presenting the first science results from this expedition at the 2018 Fall Meeting of the American Geophysical Union on December 10 to 15, 2018 in Washington, D.C. 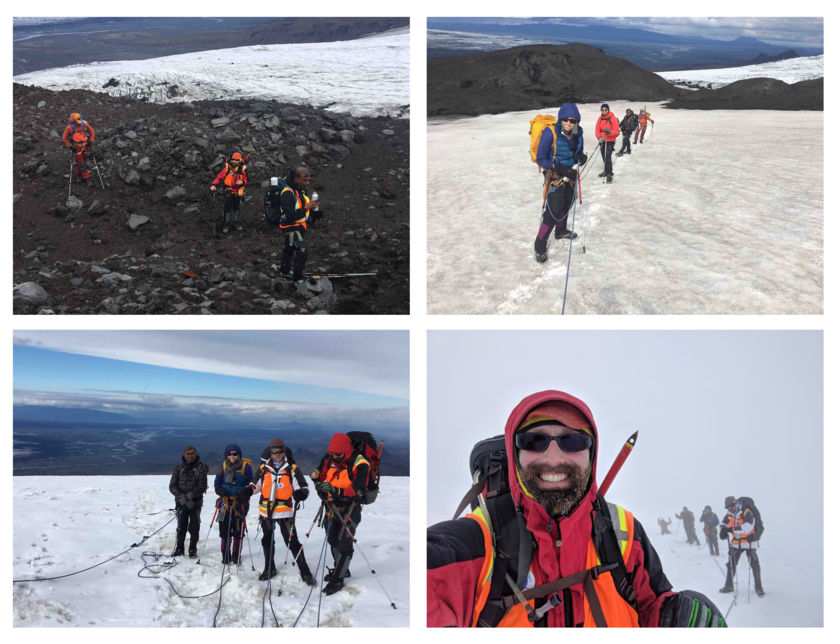 The Europa analog research described was by one of three teams (‘Team Ice’) undertaking a joint expedition to Iceland in July-August 2018 funded by the NASA Geophysical Instrument Field Team (GIFT) project. Two other groups (‘Team Fire’ and ‘Team JS’) investigated other areas during the same trip, including lava flows. The field work would not have been possible without the efforts of many individuals from all three teams, and logistical support from GIFT. We also express our sincere gratitude to the rangers and guides of the Vatnajökull National Park, and our colleagues and logistical support at the University of Iceland and FELT. 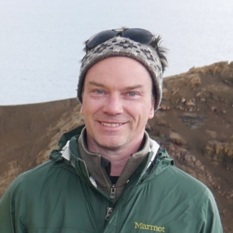 A Robert Frost poem (1920) comes to mind Fire and Ice Some say the world will end in fire, Some say in ice. From what I’ve tasted of desire I hold with those who favor fire. But if it had to perish twice, I think I know enough of hate To say that for destruction ice Is also great And would suffice.

While it seems what you guys did was lots of fun, it was also kind of pointless. The Icelandic ice caps are in now way anywhere close to being a Europa analog. There are simple reasons for this: Europa doesn't have an atmosphere. The surface is a vacuum. Iceland has a complete and thick atmosphere and not only that, the temperature is hundreds of degrees (fahrenheit or centagrade, it doesn't matter) warmer than Europa.