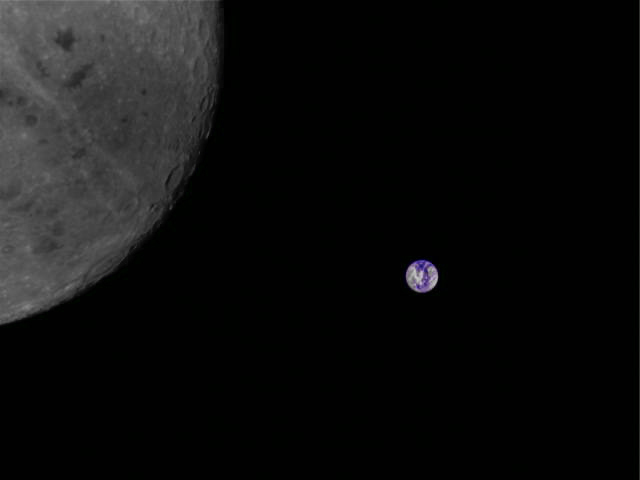 The Moon and Earth

The Earth and far side of the Moon as seen by the Chinese Longjiang-2 lunar orbiting spacecraft.

Since June this year, the Chinese Longjiang-2 (also known as DSLWP-B) microsatellite has been orbiting the Moon. The satellite is aimed at studying radio emissions from stars and galaxies at very long wavelength radio waves (wavelengths of 1 to 30 meters). These radio waves are otherwise blocked by the Earth’s atmosphere, while the lunar environment offers protection from Earth-based and human-made radio interference. Longjiang-2 was launched to the Moon together with an identical twin, Longjiang-1 (DSLWP-A), together acting as a radio interferometer to detect and study the very long wavelength radio waves by flying in formation in lunar orbit.

Besides the scientific instruments, both Longjiang satellites carry a VHF/UHF amateur radio transmitter and receiver (a transceiver) built and operated by the Harbin Institute of Technology (in Chinese). The Longjiang-2 transceiver also includes an onboard student camera, nicknamed the Inory Eye. The Harbin team built on experience gained with the Earth-orbiting LilacSat-1 and LilacSat-2 nanosatellites, which allow radio amateurs to receive satellite telemetry, relay messages and command and download images taken with an onboard camera.

While receiving signals from satellites in low Earth orbit requires only relatively simple antennas, doing so for satellites in orbit around the Moon (a thousand times more distant), is much harder. To this end Longjiang-1 and 2 transmit signals in two low data-rate, error-resistant, modes; one using digital modulation (GMSK) at 250 bits per second, while the other mode (JT4G) switches between four closely spaced frequencies to send 4.375 symbols per second. This latter mode was developed by Nobel-prize winning astrophysicist Joe Taylor and is designed for radio amateurs to relay messages at very low signal strengths, typically when bouncing them off the surface of the Moon.

During the trip to the Moon in the days after the 20 May 2018 launch of Longjiang-1 and 2, radio amateurs were able to receive GMSK telemetry from both satellites, as they were still close to the Earth. Due to a malfunction of the thruster control logic required for the spacecraft to make course corrections, contact with Longjiang-1 was lost on 21 May. Fortunately, Longjiang-2 did arrive in a 357-by-13704 kilometer elliptical orbit around the Moon.

Since then, many radio amateurs have been able to receive transmissions from Longjiang-2. Usually, the transceiver is powered on for 2-hour sessions at a time, during which GMSK telemetry is transmitted in 16-second bursts every 5 minutes. After some testing sessions in early June, the JT4G mode was activated, with 50 second transmissions every 10 minutes.

Specialized open source software written by MingChuan Wei and the Harbin team enables radio amateurs to decode telemetry as well as image data and upload it to the Harbin website. 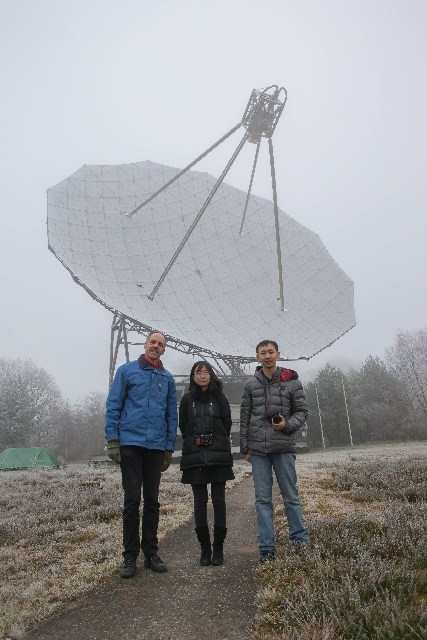 In the Netherlands, we have been using the Dwingeloo radio telescope, a 25m dish, to receive UHF signals from Longjiang-2. Due to the large sensitivity of the telescope, the GMSK and JT4G digital signals can easily be decoded. The Dwingeloo radio telescope is currently in use by radio amateurs, but has a long history as radio telescope. It was built in 1956 as the largest radio telescope at that time. The telescope has a long history of discoveries, in particular of the galaxies Dwingeloo 1 and 2. Scientifically obsolete in 1990’s, it was taken over by the CAMRAS foundation in 2007. The telescope was declared a national monument, and was fully restored in 2012. The Dwingeloo radio telescope is now maintained and used by volunteers for various purposes, including outreach, radio astronomy, art and amateur radio applications. A few examples of the latter, many of which are led by Jan van Muijlwijk PA3FXB: the telescope has assisted in rescuing several cubesats (BEESAT-3, e-st@r II, Triton-1, INSPIRE-2, UNSW-EC0), and the telescope is one of the largest stations to do moonbounce experiments. The combination of these two activities make the DSLWP-mission fit in very well. Due to the very wide orbit of the satellite and the narrow beam of the 25-meter dish, adjustments were needed to point the dish towards the satellite instead of the Moon. In fact, during the downlink of the Earth-Moon image, the separation between the two was about 2 degrees.

Since the student camera is fixed to the satellite, whose solar panel remains pointed towards the Sun, careful planning was required to take the picture. MingChuan Wei and Daniel Estévez predicted that during the first weeks of October the orientation of the orbit, Moon, Sun and Earth meant that the Longjiang-2 camera would be able to, for the first time, take images of the Earth.

To arrange taking the picture, Reinhard Keuhn (DK5LA) used his array of yagi antennas to command Longjiang-2 to take an image and transmit it back to Earth. The commands Reinhard sent were generated by MingChuan Wei from the Harbin team that built the Longjiang satellites. The Dwingeloo telescope, as well Robert Mattaliano in North America, Mike Rupprecht in Germany and Imants Tukleris in Latvia were able to receive and decode the packets with image data and upload it to the Harbin telemetry portal. 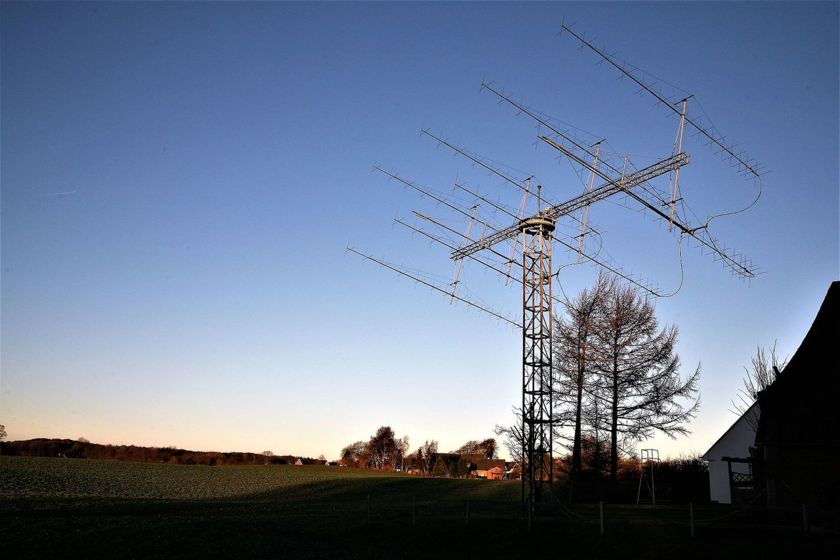 The setup used by Reinhard Kuehn (DK5LA) for the command uplink.

The image data was transmitted using SSDV encoding, originally designed by radio amateur Philip Heron for balloon transmissions. Because of the low data rate, downloading a 640-by-480 pixel image is slow and takes around 20 minutes. During attempts earlier in the week to take and download images of the Earth and the lunar surface, the lunar surface and Earth were over exposed, so commands to adjust the exposure time and take new images were uplinked. On the morning of October 9th the orientation of the satellite, Earth, Moon and Sun was predicted to be optimal, and a picture was automatically taken when the transceiver was powered on by the satellite computer. On October 10, when the Moon was visible from Europe and the transceiver was again active, Reinhard sent the commands to download this image. As the image was transmitted back to Earth, many were anxiously awaiting the lines of the image to be filled in to see if the picture actually contained the Earth. Around 14:40UTC it was clear that we had the blue Earth in the image, resulting in a flurry of Twitter activity by many happy radio amateurs! Since some of the lines were missing, Wei sent Reinhard the commands to retransmit the image to download it again and fill in the missing parts.

The resulting image, after some slight color corrections, shows the far side of the Moon, with several prominent craters being easily identifiable. The fully illuminated disk of the Earth shows blue oceans, cloud patterns, and some landmasses, which, based on the time the image was taken, are most likely Africa and Australia.

Downloading this image from Longjiang-2 was, without a doubt, the highlight of this project so far, and a great reward for spending a dozen observing sessions in the Dwingeloo telescope, sometimes in the middle of the night, while communicating by email and twitter with radio amateurs spread across the globe to combine efforts and share results. Daniel Estevez is keeping up with blog posts about the mission. Since Longjiang-2 is still going strong, who knows what the future will bring. 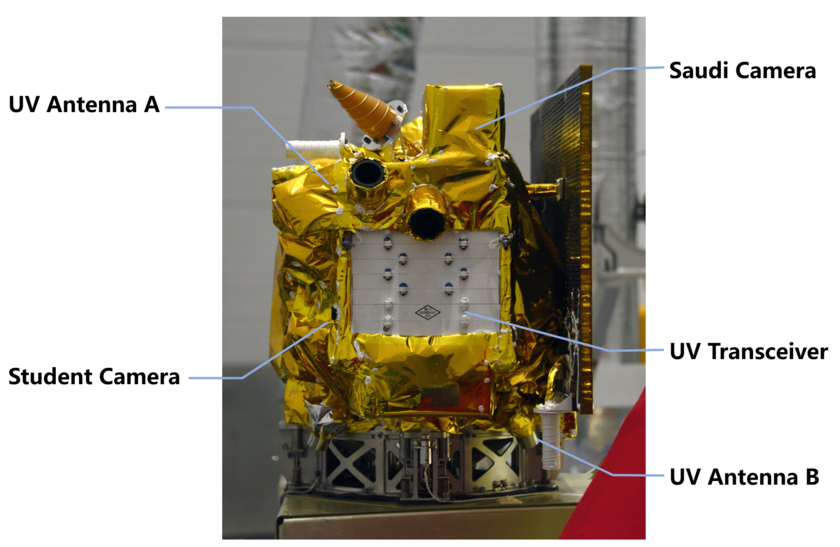 Side view of the DSLWP-B satellite, with some parts of the relevant payload highlighted. The height of the satellite is about 50cm, it weighs roughly 45kg. 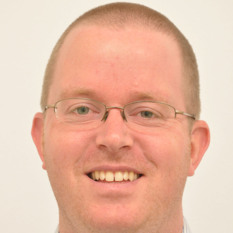 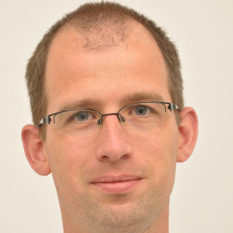