Today is about the Moon - the main conference hall has a series of presentations throughout the day - the first half being mainly about the European orbiter SMART-1. Mark Burchell (who spoke about Stardust yesterday) talked about simulating the impact of SMART-1 into the lunar surface at the end of its mission. Using the same gas gun that was used to understand the Stardust collection process, he and his team simulated the comparatively low speed, very low angle of incidence impact for SMART-1 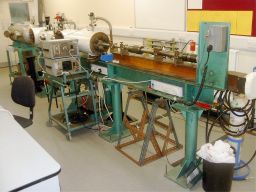 The light gas gun used to simulate impacts of comet material into aerogel, and SMART-1 into the Moo
A typical lunar meteorite impact, the sort that are occasionally caught on film, average an angle of about 45 degrees, and a speed of many tens of kilometers per second - perhaps 75 or more. SMART-1 was traveling at just two kilometers per second - and hit the surface at an angle of one degree. The question is, what should we expect that to do in terms of cratering and ejecta, and what might happen to the spacecraft? Mark's team used a lunar regolith simulant based on sand, and a 2-millimeter-diameter aluminium sphere fired down their 5-meter-long gas gun. They did a total of 14 test runs, with two at 10 degrees, four at 5 degrees, four at 2 degrees, and a final four at the SMART-1 impact angle of 1 degree. The morphological changes between these angles are significant.

At 10 degrees, the crater is fairly round and a central peak forms, slightly