Good Morning from Potsdam. After a great break in Potsdam to visit the venue of the Potsdam Conference it's time for the second Europlanet conference to kick off. There are, as I'm sure I mentioned last year when visiting Valencia, and as Emily has mentioned when visiting conferences as well, a thousand and one consecutive sessions over the next week. Actually, six. But my Macbook and I can only be in one at a time, so I'm going to do my best to jump from session to session and see the presentations that I hope the average TPS blog reader wants to hear about!

I even do requests - and someone at UnmannedSpaceflight.com asked me to look in on the CoRoT presentation. I've just got out of the lecture hall and it was not a presentation with earth shattering results - more a promise of what is to come rather now they have experience of using the spacecraft for a few months. Here's what Malcolm Fridlund had to say. 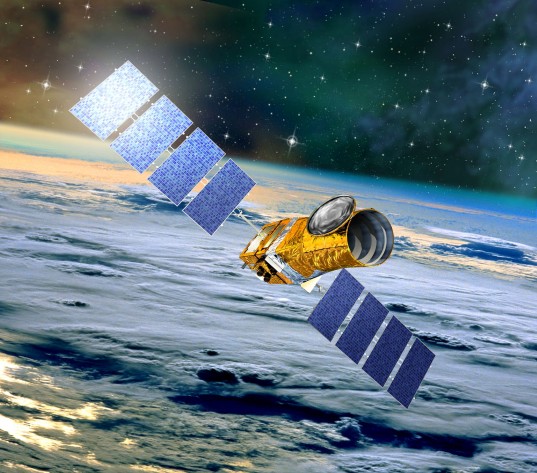 CoRoT was originally designed to look for exoplanets much larger than Earth, and was launched last December on a Soyuz 2 rocket from the Baikanour site. So accurate was the launch vehicle performance ( the apogee being out by only 80 metres, the perigee by only 200 metres ) that they have expended much less fuel than they expected to to reach their final orbit - meaning that the 2.5 year nominal mission will almost certainly be followed by an extended mission of at least 3.5 years. Malcolm joked that the Soyuz rocket was first designed to carry nuclear missiles, and perhaps the third stage of the rocket was having a bit of a relapse when it re-entered over Cheyenne Mountain, 30 miles from the major US defense centre.

CoRoT has a 27 cm telescope (typical of high-end amateur telescopes) with four 2048 x 4048 CCD's. They're designed to measure, very very accurately, the magnitude of stars. Two of the CCD's are for Astroseismology - 'sunquakes' so to speak - and they observe several hundred starts from Magnitude 6 to Magnitude 9, for 32 second intervals, continuously for 30 to 60 days. The other two CCD's are to observe transits - one of the methods to find exoplanets. For transit campaigns they will observer 6000 - 12,000 objects from Mac 11 down to Mag 16.5 - integrating for 512 seconds at a time, for 150 days. The spacecraft has very accurate pointing, and can even be seen to wobble by about 2 arc seconds each time it enters an eclipse.

A typical year for CoRoT will be two, 150 day transit observations, filled in with a few Astroseismology observations. They have to follow up each round of transit observing with around two weeks of observing time on a 1m class telescope to get radial velocity and high resolution spectral data from the newly detected exoplanets in that 2.7 x 2.7 degree patch of sky. They have not yet conducted that follow up for their first round of observations as that patch of sky is now behind the sun as seen from earth and will not be visible to telescopes for a few more months. Their second transit observation is now underway and they are about half way through this 150 day session. 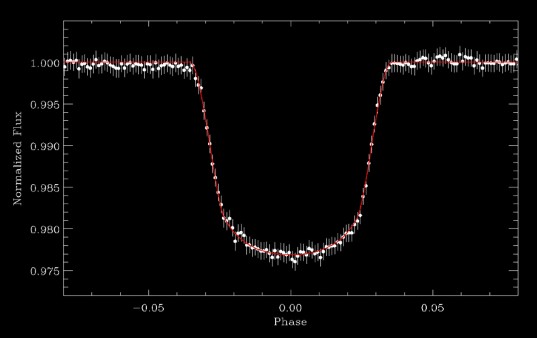 ESA's planet-hunting satellite COROT bagged its first exoplanet in observations of the star COROT-Exo-1. This telltale drop in the brightness of the star indicates that a planet transited the star, momentarily darkening its disk.

Malcolm strictly asked for none of the images in his presentation to be printed or distributed. CoRoT isn't a 'pretty pictures' sort of mission, but the graphs do make interesting viewing - look for them to start appearing in a few months time. Their first observing session looked at 11,600 targets and their first planet (CoRoT Exo 1b) was found very quickly - a 1.3 jovian mass planet orbiting with a period of 1.5 days orbiting a magnitude 15 star. This planet has been reported in the media already. The accuracy of the photometry was down to a level of 3 x 10^-4 (3 mili-magnitudes) which allows for a very accurate graph to be built up over a total of 40 transits of the planet.

New targets not already discussed include another planet around a 14th magnitude sun-like star with a period of 33 days (very long for exo-planets), another with a period of 8 days around a type G5 star, and another 1.7 day orbit around a 12.5 magnitude K0 star. He also showed a few graphs of eclipsing binary stars. These produce strange graphs as the two stars (typically one bright and one dim) add up their light, then hide one another, producing weird double peaked graphs. Malcolm also showed a few graphs of magnitude versus time to which he simply said ?God knows what it is'. Their very first suspected transit was infact a red dwarf star grazing the disc of another star. CoRoT will provide huge amounts of data for a whole swathe of stellar investigation - not just transits and seismology.

Malcolm closed explaining that they found a few dozen transits in their first observing session - more than some expected them to find in their entire mission. The spacecraft is performing so well, and so much better than they expected that they fully expect to be able to locate Earth like planets in Earth like orbits around Sun like stars. For €150M, we'll be getting some serious points on the graph regarding habitability of exoplanets.