The OSIRIS-REx spacecraft continues to progress smoothly through the Assembly, Test, Launch and Operations (ATLO) process. This past month, the team successfully and safely completed sine vibration (sine vibe) testing prior to the Thanksgiving holiday. The sine vibe tests are designed to verify the system performs as expected after being exposed to flight-like low frequency vibration input. 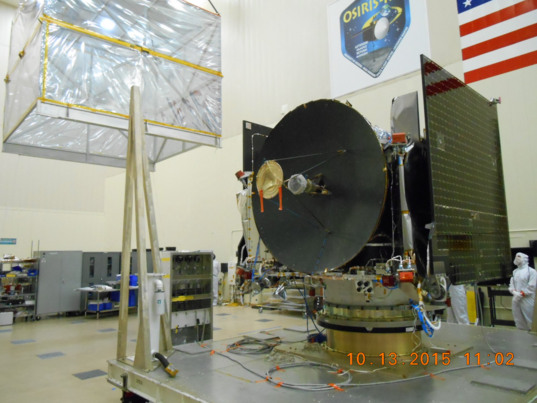 OSIRIS-REx is unpacked after moving over to the RAL facility.

The spacecraft will experience these vibrations during transport from Denver to Cape Canaveral for the launch and also during the rocket launch itself. The spacecraft will be shipped aboard a U.S. Air Force C-17 transport plane from Buckley Air Force Base near Denver to the Kennedy Space Center where it will undergo final processing in preparation for an early September launch. This transportation environment can induce low-frequency random, transient, and periodic vibrations at low levels, but with long durations. This stress has been known to cause spacecraft failures in the past. Perhaps most famously, the failure of the Galileo Jupiter probe high-gain antenna was probably the result of ground transportation vibration. In addition, flight data from numerous rocket launches show that significant random, transient, and periodic vibrations are transmitted to spacecraft payloads at frequencies up to ~100 Hz or higher. The sine vibe tests will ensure that OSIRIS-REx can survive its journey from the ATLO floor to interplanetary space. 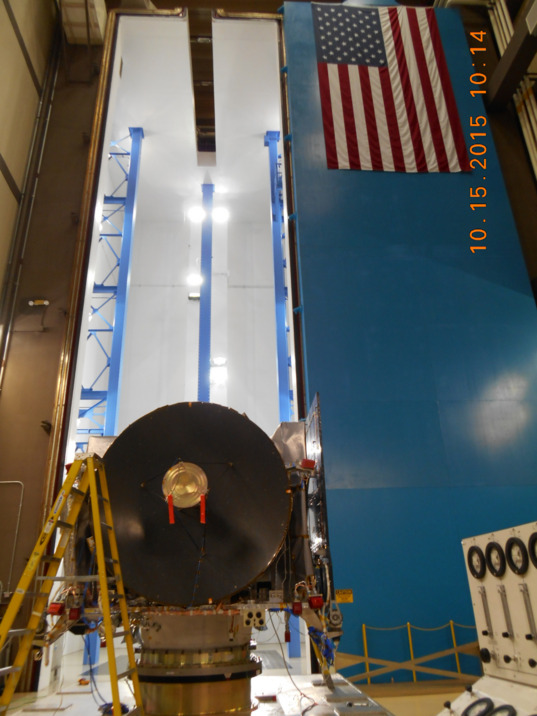 The spacecraft enters the test chamber and is readied for mechanical testing.

The prime objective of the sine vibe test is to expose the spacecraft to a protoflight level (1.25 x limit) of vibration from 10 – 60 Hz. The test is performed three times – once for each spacecraft axis direction (X, Y, and Z). The environment is designed to perform a dynamic workmanship test of the flight hardware. It will excite the science instruments and the spacecraft appendages such as the solar arrays and TAGSAM, which may have fundamental resonance frequencies in the test range. It will also excite structural and electrical interfaces and items which are difficult to test at lower levels of assembly such as cables, tubing, thermal blankets, etc. Through this process, the team can uncover design and workmanship problems in the fully assembled “as-built” flight spacecraft. Spacecraft vibration tests thus provide both a workmanship screen and qualifies the flight system for a significant mission environment. 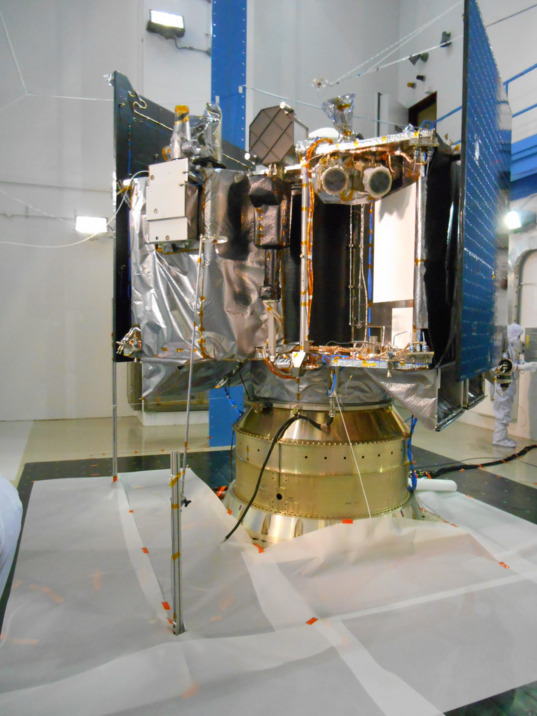 OSIRIS-REx is unpacked after moving over to the RAL facility.

Vibration testing has been used to identify both workmanship and design issues in many interplanetary spacecraft. For the Cassini mission to Saturn, the spacecraft experienced an electrical short from the radioisotope thermoelectric generator to its spacecraft mount during a system random vibration test. The vibration wore isolation coating off of the spacecraft mount, which could have resulted in significant degradation in spacecraft electrical power. In response to this finding, the spacecraft mount was redesigned. For the Mars Exploration Rovers, fundamental modes of the Rover in spacecraft random vibration test were 20% greater than predicted in all three axes. The vibration test also revealed improper torque of bolts on some tanks. Afterward, the bolts were properly torqued and the test completed successfully. During testing of the MSL Rover several motor encoder screws backed out of at least one of the Rover actuators during random vibration testing. The actuators are used throughout Rover and the issue was unlikely to have otherwise been found before launch, which could have been a serious threat to the mission. Fortunately, OSIRIS-REx completed its sine-vibe test without any issues – the spacecraft is ready for transport and launch! 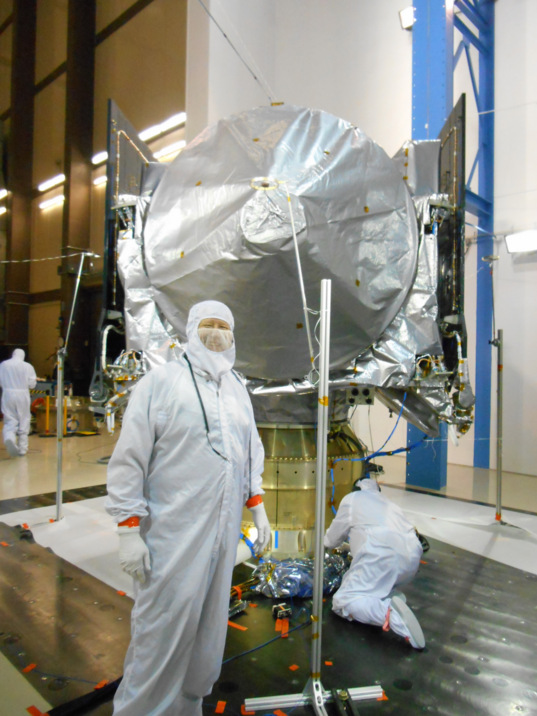 The team at LM takes good care of OSIRIS-REx throughout ATLO.

The spacecraft has since left the Reverberant Acoustic Laboratory (RAL) chamber and has been transported back to the Space Support Building (SSB), clearing the way for the GOES-R spacecraft to perform its vibration testing. OSIRIS-REx will spend the month of December and the early portion of January in the SSB to accomplish a series of installations and reconfiguration work. This work includes the installation of the last two science instruments – the OSIRIS-REx Laser Altimeter (OLA) and the Regolith X-Ray Imaging Spectrometer (REXIS). Both OLA and REXIS were delivered after the spacecraft started mechanical environmental testing. To ensure test fidelity, we mounted mass models of these two instruments in the proper locations and monitored the vibration loads that each instrument would have experienced. We then perform regression testing on the instruments to ensure their safety during the launch.  The instruments will be on the spacecraft for the upcoming electromagnetic testing (EMI/EMC) and the system-level thermal-vacuum test. More on these tests as the spacecraft continues towards a successful launch in September 2016. 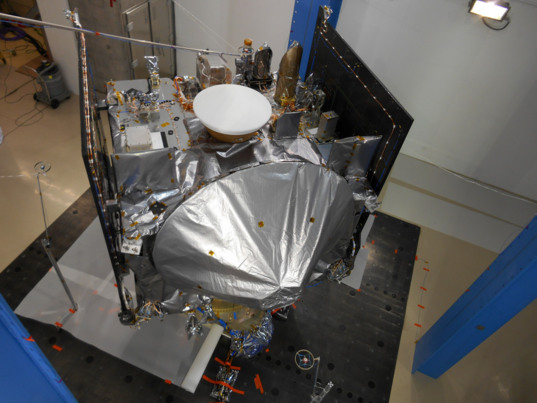 The view from the +Z axis featuring the Sample Return Capsule (center) and the science payload.

The James Webb telescope is going to be launched on an Ariane 5 rocket. http://www.orlandosentinel.com/news/space/go-for-launch/os-european-space-agency-to-launch-james-webb-space-telescope-20151217-post.html Also, New Horizons saw KBO 1994 JR1 from 170 million miles away, and it shows the shape of the thing and one or two details. Totally cool. http://www.spacedaily.com/reports/New_Horizons_catches_a_wandering_Kuiper_Belt_Object_not_far_off_999.html

Bravo OSIRIS-REx for sailing through these test stages... it's a testament to the skill, accuracy and hard work of the entire team. Regards, Mark.