How Do We Know When We Have Collected a Sample of Bennu?

A huge amount of effort goes into deciding where to try to collect a sample on Bennu. There are roughly nine months to survey, map and model the asteroid to help make this decision, and I will describe some of the important factors of that decision below.

Just as important – after our first attempt to collect a sample – is the decision whether or not to stow the sample and return home, or stay at Bennu and try to collect more (or some) material. This decision needs to be made in 10 days. These are vastly different timescales – nine months versus 10 days, but both are important to the success of the mission. 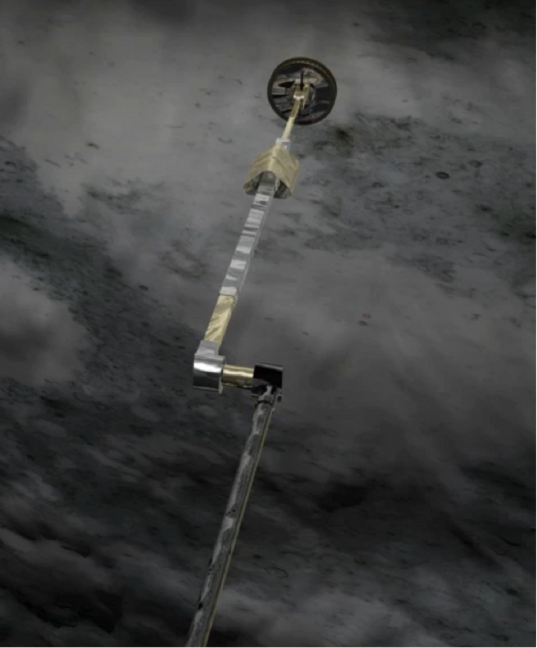 Artist view looking from the spacecraft down at the extended arm, and the sampling device during the descent to the surface.

The OSIRIS-REx mission will spend nearly nine months surveying Bennu. While the different imaging campaigns are designed to give maximum scientific insight into Bennu, it is also critically important to the selection process of the eventual sample site. Lots of factors go into this decision: the easiest and safest places to fly the spacecraft, the best strategy to avoid surface hazards (boulders, craters, pits, or valleys), the regions with material best suited to be picked up by the sampling device, and the places of the highest scientific interest. The sampling device has been tested in the laboratory, and on “vomit comet” zero-gravity flights, to determine how it performs when attempting to sample a range of materials in a wide range of conditions. At the conclusion of these test we will know what type of material the sampling device is best at collecting, and our survey of Bennu will point the mission towards locations best suited for our sampling techniques.

A testbed for the sampling device, where the sampling efficiency is being tested in a bed of irregularly-shaped gravel (Credit: Lockheed Martin).

Estimating the amount of material collected

1. Moment of Inertia Test: The spacecraft will be rotated around its main axis with the sampling arm fully extended. This is done before and after the sampling attempt. A change to the spacecraft moment of inertia caused by only 150 grams of sample in the sample device will be detectable.

An illustration of the Moment of Inertia test – where the spacecraft is spun about one axis with the arm fully extended (Credit: Lockheed Martin).

2. Imaging: During the sample attempt (“TAG” for Touch and Go), a camera will take rapid-fire images of the actual sampling site. Later, after the spacecraft has backed away from Bennu, different cameras will take images of the sampler head at different angles and orientations. This technique can provide a mass determination with 90-gram precision. At worst this measurement will show that the container is filled with pieces of Bennu (success!) or that it is empty (failure).

Our SamCam is used to image the TAGSAM sampler head after attempting sample collection.

What happens if the Moment of Inertia test detects nothing? We might have succeeded, but collected slightly less than the 90 grams that can be detected – but much more than the goal of 60 grams.

What happens if the images are inconclusive, or there is a problem with a camera(s)? TAG Reconstruct!

There is a project underway, called “TAG Reconstruct”, whose goal is to use all means necessary to estimate the likelihood of sampling success by reconstructing exactly what happened during the time that the spacecraft touched Bennu. There are actually a few more pieces of data that, if nothing else is available, might be able to answer these questions.

The primary instrument for this task is the spacecraft itself. The TAG event is exciting because after nine months of surveying from a distance the spacecraft will actually touch the asteroid. For many spacecraft guidance and safety reasons the spacecraft is outfitted with lots of sensors, including those that determine acceleration (using accelerometers – such as those in an iPhone that make it possible to play driving games). Just before the spacecraft touches Bennu, it will be in free-fall, slowly dropping towards the asteroid’s surface. During this free-fall phase its acceleration in all directions will be zero. The instant it touches Bennu, it will measure some deceleration as Bennu starts to slow it down and change its velocity. The accelerometers play a role in the mission by telling the spacecraft that it has touched the surface, and after this is indicated it will start the collection process and then eventually fire the engines to back away from the asteroid.

So, the spacecraft has a device to measure the spring compression, right? No. Well, not exactly. Rather, it is equipped with a switch that indicates that the spring started to compress, and then later it indicates when it has gone very far. It does not give an exact measure. One novel way to estimate the total spring compression is to use the very high-resolution images taken during the sampling attempt, and use the size of the sampling head in the images to determine how far away it was from the camera. If its size changes, then its distance has changed and we can estimate how much the spring compressed by how much closer the sampling head got. However, we are preparing the worst – the cases where our imaging is not ideal or non-existent, so we need more tools.

While there are a lot of different things that could happen when the spacecraft touches Bennu, we can try to model a large range of them beforehand. For years planetary scientists have been building models of how asteroid surface materials, its regolith, behave in different circumstances. These models typically employ a huge number of simulated surface particles interacting with each other via friction, cohesion and other forces. Meanwhile all the particles feel the very small gravity of the parent asteroid (for Bennu the gravity is nearly one-hundred thousand times less than on Earth). Using these models of an asteroid surface we can simulate the response of the spacecraft during its brief interaction, and we can estimate what the accelerometers will measure in each case.

The outcome of computer model of a sampling attempt on a steeply sloped surface. The sampling device is represented by the transparent gray cylinder at the top of the image, and the regolith of Bennu are the purple spherical particles (Credit: Ron Ballouz, University of Maryland).

There are two teams working on this project, at the University of Colorado and the University of Maryland. They are tasked with building an “atlas” of possible acceleration readings for a huge range of possible surface properties. So when we get to Bennu and grab our sample, we can take the accelerations felt by the spacecraft, look in our “atlas”, and get a good idea of just what happened and what the surface properties were at the sample site. This helps the mission know that we chose a good spot and collected our sample. It also helps us understand this once-in-a-lifetime science experiment. We are touching an asteroid – and we are doing it with a spacecraft that is as massive as a car, and one that is outfitted with LOTS of sensors. We are going to use what it tells us to learn more about properties of Bennu! 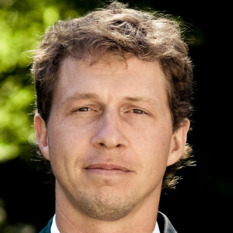 I don't know exactly where else to put this, but a report I read here: (https://theconversation.com/dawn-breaks-over-distant-ceres-and-perhaps-signs-of-habitability-38967) states "As if that were not enough, a further series of pictures appear to show a plume emanating from the surface. Is Ceres active? " If the alleged plume is real, then this is the most important discovery of the decade thus far.