Planet Formation and the Origin of Life

On Monday, February 2, 2015, I will present the UA College of Science Lecture on “Planet Formation and the Origin of Life”. This is a research theme that I have pursued for most of my career. It is generally accepted that planets or their satellites are required for life to originate and evolve. Thus, in order to understand the possible distribution of life in the Universe it is important to study planet formation and evolution. These processes are recorded in the chemistry and mineralogy of asteroids and comets, and in the geology of ancient planetary surfaces in our Solar System. Evidence can also be seen in the many examples of ongoing planet formation in nearby regions of our galaxy. In addition, the variety of observable extra-solar planetary systems provides insight into their origins and potential for life. In this lecture I will discuss these ideas and summarize our current understanding of planet formation and the accompanying processes that may lead to the origin of life throughout the Universe. This article provides some more detail on the topics that I will cover. 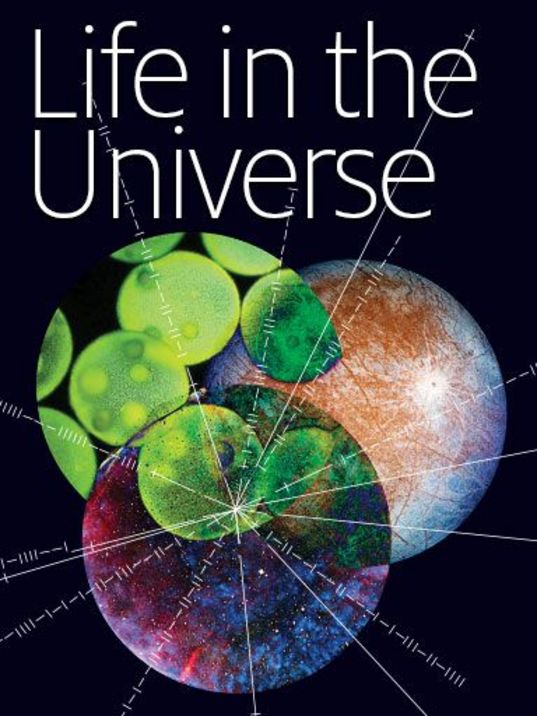 The UA College of Science presents seven free lectures on “Life in the Universe”. This series explores our Universe at molecular, biological, planetary and cosmic scales to ask “What is life?” and “How do we recognize it?”

To start the lecture, I will explore the idea of the last universal common ancestor (LUCA). LUCA is thought to be the most recent organism from which all organisms now living on Earth are descended. The tree of life consists of three domains: Archaea, Bacteria, and Eukarya. Archaea and bacteria are single-celled organisms whose cells have no nucleus. All eukaryotes have cells that contain a nucleus and membrane-bound organelles. Most multi-cellular life, including humans, other animals, and plants, are included in the eukarya domain. The relationship between the three domains is of central importance for understanding the origin of life. It has been argued that the bacteria, archaea, and eukaryotes represent separate lines of descent that diverged early on from an ancestral colony of LUCA organisms. 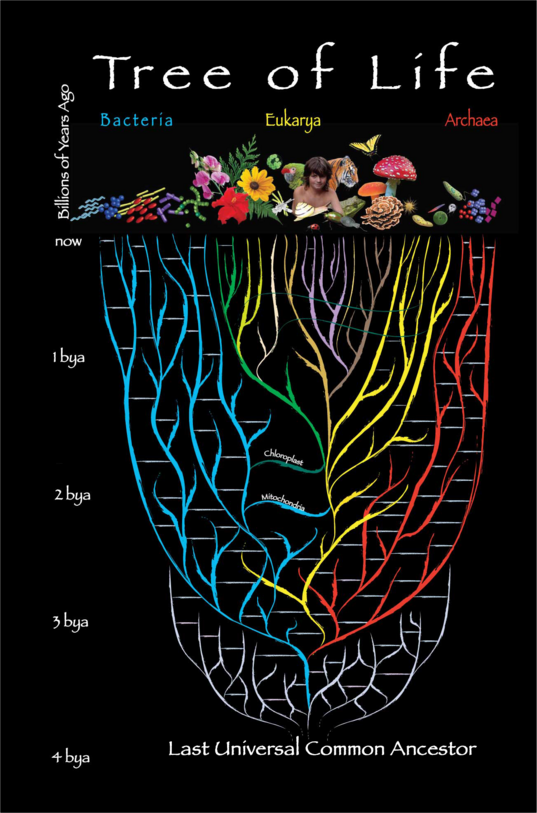 All life on Earth appears to be descended from a single, common ancestor, called LUCA.

LUCA is estimated to have lived 3.5 to 3.8 billion years ago. We can infer the nature of these organisms based on the common biochemistry between the three domains of life. LUCA was likely a small, single-cell organism. It would have had a cell wall and a strand of DNA floating freely inside. Thus, it was likely very similar to modern-day small bacteria. RNA was produced by a DNA-dependent RNA polymerase using nucleotides similar to those of DNA. The genetic code was expressed into proteins, which were assembled from free amino acids by translation of an mRNA by ribosomes, tRNA and a group of related proteins. Only 20 amino acids were used, to the exclusion of countless others. These amino acids were “left-handed”, meaning that only the L-isomers of the amino acids were used, even though both right- and left-handed molecules occur naturally. The cell interior contained a water-based cytoplasm that was surrounded and enclosed by a cell membrane made of a lipid bilayer membrane. The cell multiplied by duplicating all of its components followed by cellular division. 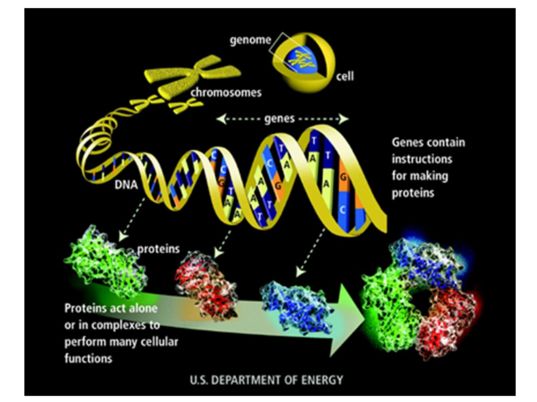 The basic mechanisms of biochemistry are common to all life on Earth.

Most biological molecules are made from combinations of six important elements that occur in living systems. Their chemical symbols are CHONPS, a mnemonic for the main elements: carbon, hydrogen, oxygen, nitrogen, phosphorus, and sulfur. One of these elements, hydrogen, is primordial and formed in the Big Bang at the beginning of our Universe. The other five elements formed in the cores of stars through nuclear reactions. Stars are basically thermonuclear furnaces in which H and He are fused into heavier nuclei. This process provides the energy for the Sun and all other stars. The products of stellar nucleosynthesis are dispersed into the interstellar medium (ISM) from low-mass stars through mass loss and stellar winds. For the most massive stars, the elements are ejected into the ISM during the supernova explosion at the end of the stars life.

Six elements form the basis for the most important molecules of life.

Stars eject the products of nucleosynthesis into the ISM at the end of their life. These elements become the source material for the next generation of star and planet formation. Before that happens, however, they bond together to form more complex molecules. Interestingly, organic molecules appear to be widespread in our Galaxy. Well over one hundred different molecules have been identified; most of them organic in nature. Among the molecules identified are water, carbon monoxide, formaldehyde, methanol, dimethyl ether, hydrogen cyanide, sulfur oxide, and sulfur dioxide. This diversity provides a glimpse of the chemical richness available at the beginning of star and planet formation. 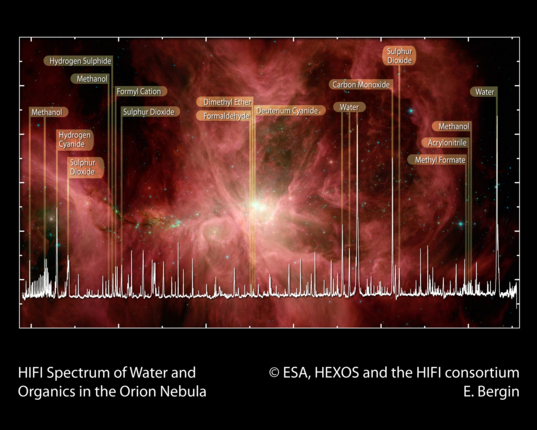 ESA, HEXOS and the HIFI consortium

Spectrum of the Orion Nebula

A spectrum of the Orion Nebula showing the molecular diversity of star-forming regions, superimposed on a Spitzer image of Orion.

The molecular diversity of the ISM sets the stage for the chemistry of the planets that will form from this material. I describe this process in detail in a previous post and it is illustrated in the animated short “Bennu’s Journey”. In short, 4.5 billion years ago a giant molecular cloud collapsed to form our protoplanetary disk. Dust grains formed and accumulated into chondrules, asteroids, and ultimately planets. Approximately 500-700 million years after the planets formed, the terrestrial planet surfaces were hammered by repeated large asteroid impacts in an era called the late-heavy bombardment. This process likely sterilized the surface the Earth, destroying any early life that may have taken hold. Life on Earth may have emerged during or shortly after this heavy bombardment phase, perhaps as early as 3.90–3.85 billion years ago.

The Seeds of Life on Earth

Earth was able to support life only after the planet had cooled enough for a rocky crust to solidify, liquid water to condense and accumulate, and residual gases to form the early atmosphere. Some models suggest that gases such as ammonia and methane were common, creating a reducing environment. The famous Miller-Urey experiment showed that lightning discharges in such an atmosphere would produce the building blocks of biopolymers such as amino acids, sugars, purines and pyrimidines in abundance. Recent modeling of the Earth’s early atmosphere suggests more neutral atmospheric conditions precluding the formation of significant concentrations of prebiotic organic compounds. Fortunately, nature provides another source of these important seeds of life. 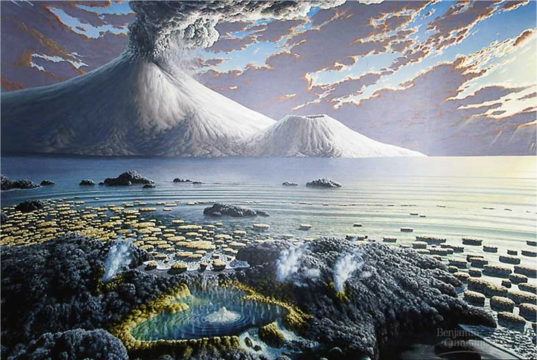 Life appears to have originated on Earth shortly after the end of the late-heavy bombardment.

Carbonaceous chondrite meteorites contain a significant amount of organic carbon and some standard amino acids and nucleic-acid bases. Our recent work on amino acids in meteorites showed that amino acids and sugar alcohols are fully represented in some meteorites. The most pristine meteorites also revealed large (up to 60%) natal enantiomeric excesses (molecules that are mirror images of one another). These excesses are much larger than previously recorded, providing a possible source of the handedness of life discussed above. 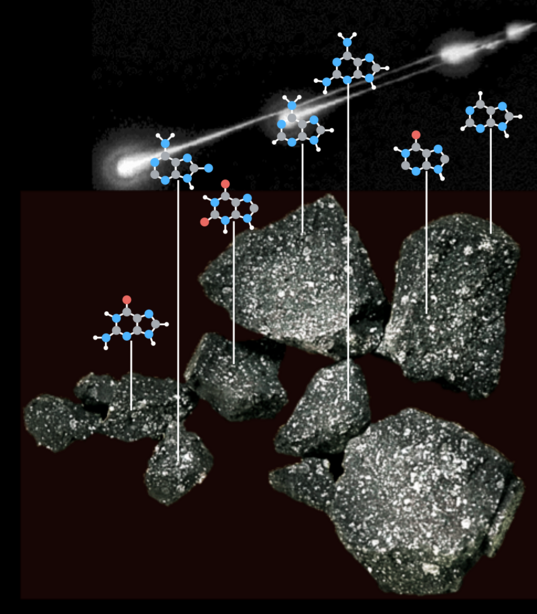 Carbonaceous meteorites may have brought the prebiotic seeds of life to early Earth.

The Source of Phosphorus

Other work that we have done offers an intriguing explanation for the incorporation of phosphorus into early organic molecules. The most common terrestrial form of phosphorus is a mineral called apatite. When mixed with water, apatite releases only very small amounts of phosphate, the oxidized form in which phosphorus naturally is found. Meteorites contain several different phosphorus-bearing minerals, but the most important is an iron-nickel phosphide, known as schreibersite. This metallic compound is extremely rare on Earth, but iron meteorites contain it in abundance. When we mixed schriebersite with water at room temperature we saw a wide range of different phosphorus compounds being formed. One of the most interesting compounds was P2O7, one of the more biochemically useful forms of phosphate. The analysis also revealed numerous reactive phosphorus compounds that could go on to react with other organic molecules, potentially leading to the first nuclei acid chains and on to DNA and RNA. 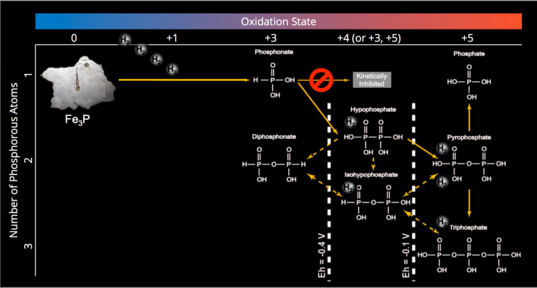 Corrosion of schreibersite in water produces a wide-range of reactive compounds that could have contributed to the origin of life.

On to the Origin of Life

Life on Earth appears to be a natural outcome of the origin and evolution of the Solar System. Science has shown that amino acids, nucleic acids, sugars, and phosphates are abundant throughout the stages of planet formation. Once these molecules were present they assembled into catalytic self-replicating polymers then made the final transition from molecules to cells. This process could have occurred in several environments. Small, warm ponds are one possibility, but recent work has suggested that deep-sea hydrothermal vents, such as those found along mid-ocean spreading centers today, may have been the cradle for life on Earth. These environments contain the chemicals and the source of energy needed to synthesize more complex organic structures. This idea is consistent with other work that suggests LUCA was a thermophile.

There is still much work to do to understand the detailed transition from complex organic molecules to living cells. However, all of our observations suggest that the basic building blocks of life, at least as recognized on Earth, must be widespread in planetary systems in our Milky Way and in other galaxies. Every month more planets are added to the inventory of known objects in the galaxy. It is likely that the chemical processes that led to the origin of life on Earth have played out millions of times elsewhere. This knowledge drives much research into the nature of the Universe, and is one of the main science objectives of OSIRIS-REx, which seeks to return pristine samples of carbonaceous asteroids from the earliest stages of solar system evolution.

Hi Dante - thank you for the info on planet formation. One issue that affects the chances of life is early bombardment by asteroids and comets ("microplanets"). I did some rough estimates on this for a Space Review essay in 2005: http://www.thespacereview.com/article/761/1 (their site is currently down) A backup copy is here: http://tinyurl.com/mfrc4as I estimate that a Chicxulub-size impact should occur, on average, every 2 weeks within a 1000 light-year radius of our solar system.

Is there by any chance a public-accessible link to a recording or slides/transcript of the talk? Sounds like it would be a fascinating and informative lecture to view.

Interesting summary. Minor nitpicks would be: - The 20 amino acids, seeing how at least 21 are universally made. [Selenocysteine, through the divergent SECIS element; http://en.wikipedia.org/wiki/SECIS_element .] - That life likely evolved when the oceans did 4.4 billion years ago, after the Moon forming impactor. http://arstechnica.com/science/2014/02/the-oldest-piece-of-the-earth-examined-atom-by-atom/ ] Both the Nice and Nice 2 (with a 1/3 the late bombardment impact flow) are likely survivable. "The LHB scenario in our main model is insufficient to extinguish microbial life (Fig. 2)." [ http://www.lpi.usra.edu/meetings/lpsc2009/pdf/2379.pdf ] That would also mostly reset life to thermophily, even though Abramov et al has a small part of mesophiles as squeezing by the impact flow bottleneck.

The great basic question of science: Membrane compartment or non-membrane phase compartment (biophase) is a physical basis for origin of life? Matveev V.V. (2016). Comparison of fundamental physical properties of the model cells (protocells) and the living cells reveals the need in protophysiology. International Journal of Astrobiology, Page 1-8. Stable URL: http://journals.cambridge.org/abstract_S1473550415000476 Preview PDF with highlights: http://www.bioparadigma.spb.ru/files/Matveev-2016-Protophysiology.Preview.and.Highlights.pdf I would be grateful to Colleagues for their critical comments to my article.