This week the OSIRIS-REx team gathered at the Lockheed Martin facility in Denver to perform a “Design Reference Mission (DRM)” walkthrough. The DRM is basically the battle plan for OSIRIS-REx for accomplishing our goal of returning pristine samples from asteroid Bennu. In addition, the DRM lays out our basic strategy for dealing with any problems or difficulties that may arise during the mission. Just like any military strategy, it is unlikely that the actual mission will play out as defined in this document. However, the DRM serves as a touchstone for the entire team to understand their role during operations as well as provide a proof of concept that our mission objectives are achievable. Our “DRM Walkthrough” meeting has participants across the integrated OSIRIS-REx team, including project leadership, scientists, engineers, operations personnel, and the instrument teams. A key goal is to reach a common understanding of each element’s roles and responsibilities within the context of the DRM.

OSIRIS-REx is a seven-year mission to return samples from Bennu. This timeline is broken into three distinct segments. The first two years after launch are called Outbound Cruise, where OSIRIS-REx journeys from the Earth to Bennu. The spacecraft will spend the next two and a half years at the asteroid for Proximity Operations. OSIRIS-REx then leaves the asteroid vicinity and spends another two and half years in Return Cruise, which culminates in the direct entry at Earth of the sample return capsule. 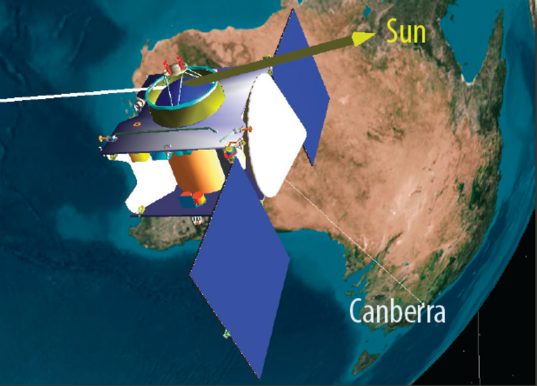 Right after launch, OSIRIS-REx makes contact with the DSN station in Canberra, Australia.

After we launch from Cape Canaveral we begin the Outbound Cruise phase. The prime objective of this phase is to journey across interplanetary space and deliver a healthy spacecraft into the vicinity of Bennu. The first part of Outbound Cruise takes one year after which we return to the Earth for a gravity assist. This assist changes OSIRIS-REx’s velocity (relative to the Sun) by entering and leaving the gravitational field of the Earth. We will use this opportunity to observe the Earth and Moon with our scientific instruments to calibrate them in flight. 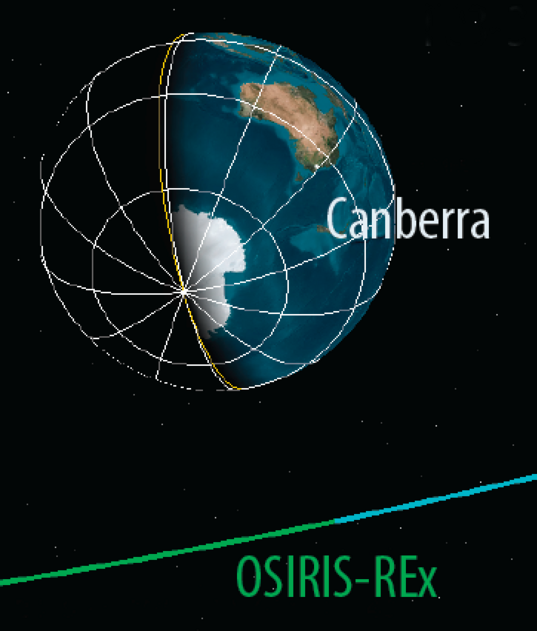 One year after launch we return to the Earth for a gravity assist.

After another year around the Sun we begin the Approach Phase. During this phase we use the PolyCam to search the region around Bennu for any potential hazards such as natural satellites or dust plumes. We also perform a series of Asteroid Approach Maneuvers to reduce the relative velocity between OSIRIS-REx and Bennu to 20 cm/s (~0.45 mph). As we approach the asteroid our instruments characterize Bennu when it is still just a point of light for comparison with our ground- and space-based astronomical observations.

Once the operational environment around Bennu is determined to be safe for the spacecraft, we begin the Preliminary Survey phase. The intent of this phase is to characterize the mass of asteroid Bennu. We do this by flying over the north pole, the equator, and the south pole of the asteroid at a distance of seven kilometers while tracking the spacecraft using the Deep Space Network. The asteroid mass will tug on the spacecraft and alter its orbit. This effect shows up as a Doppler shift in the spacecraft radio signal, which corresponds to the mass of the asteroid. We also collect a series of images that are used to refine the size, shape, and spin state of Bennu for fine tuning the Orbital Phase navigation plan. 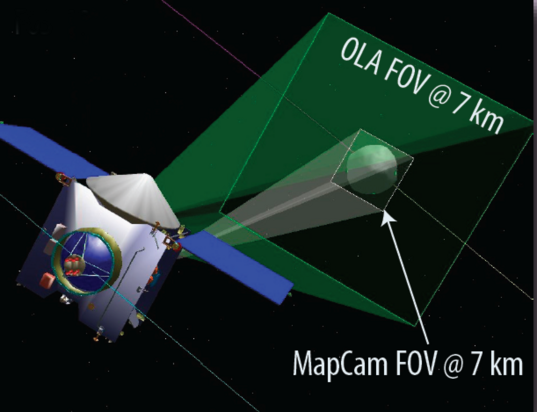 Preliminary Survey gives us our first detailed look at Bennu.

Once we know the mass, size, shape, and rotation state of Bennu, we can plan our orbital insertion maneuver. The primary purpose of this first Orbital Phase is to allow the Navigation Team to transition to feature-based navigation. In this technique we use images of known landmarks on the asteroid surface to determine the location of the spacecraft relative to the asteroid.

After the navigation team can accurately predict the future trajectory of the spacecraft, we begin the Detailed Survey Phase. Here we leave orbit and observe the asteroid at a variety of different illumination angles and local times of day using OCAMS. These data are used to identify safety hazards and assess regions that look like they contain sampleable material. We also map the mineralogy, chemistry, and temperature of the asteroid surface using OVIRS and OTES. 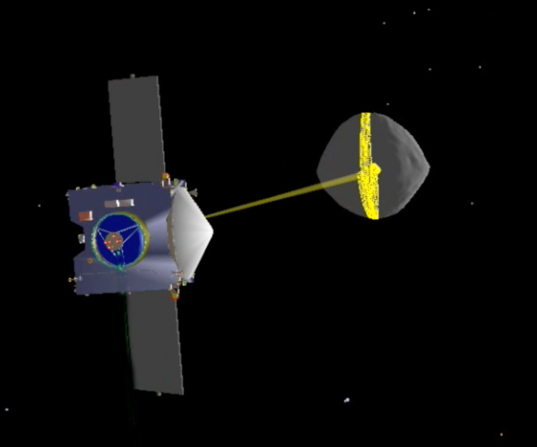 During Detailed Survey we generate the mineralogical and thermal maps of Bennu using OVIRS and OTES.

After compiling a global database of asteroid surface characteristics, we return to orbit and begin our second Orbital Phase. During this phase we gather optical data for up to 12 candidate sample sites at 5-centimeter resolution. We also use radio tracking of the spacecraft to perform high-fidelity mapping of the asteroid gravity field. This phase is also the prime science phase for OLA, which we use to map the topography of the surface. Our student experiment, REXIS, is also activated and used to map X-ray emissions from the surface, which provide information on elemental abundances. At the end of this phase we select up to 4 sites for detailed reconnaissance.

After the second Orbital Phase we transition from global characterization to site-specific data collection in the Reconnaissance Phase. We observe our candidate sample sites at two different altitudes. First we perform 225-meter Recon Passes and collect OCAMS data to verify that regolith smaller than 2 centimeters is available at the sample site. This size is the largest particle that can fit through the opening of our sampling mechanism – TAGSAM. Next, we perform a series of 525-meter Recon Passes to map the sites using OLA, OVIRS, and OTES to evaluate their topography, mineralogy, and temperatures. These data all feed into our assessment of the scientific value of the sites. 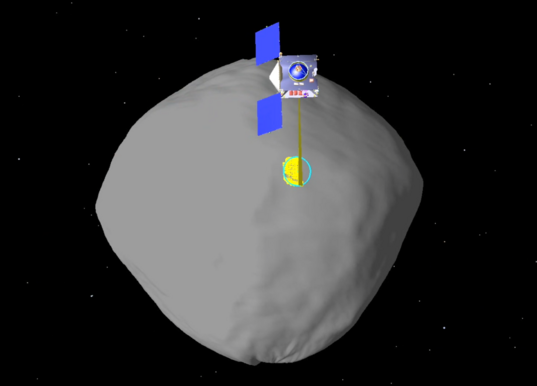 During the Recon Phase we collect high-resolution data of potential sample sites.

After the Reconnaissance Phase data collection is complete, we select the primary sampling site and prepare to collect the sample. Before we head directly to the surface, we perform a series of rehearsal steps. This approach represents a methodical and incremental series of events designed to safely prepare for the sample collection. From orbit, a small maneuver places OSIRIS-REx on a trajectory to intercept the sampling site via a “CheckPoint,” at a range of 125 meters. The second rehearsal event verifies the ability to reach the “MatchPoint” at 30 meters and match surface lateral velocity of Bennu.

Once we have successfully completed these rehearsal steps, we are ready to descend to the surface and collect the sample of Bennu – as described in detail in my earlier post – A Game of Laser TAG.

After contact is made and the sample acquired, the spacecraft fires two thrusters to reverse the motion of OSIRIS-REx and head away from the asteroid. Once at a safe distance, the results of the sample event are evaluated. The sample mass is measured by determining the change in the moment of inertia of the spacecraft – a technique that was first employed on the Cassini spacecraft to monitor the amount of propellant in the spacecraft fuel tank. The TAGSAM head is then brought into view of the SamCam to visually inspect TAGSAM for signs of successful sample acquisition such as dust on the exterior. Once we are convinced that we have met our sampling science requirements, the TAGSAM arm places the sampler head into the Sample Return Capsule (SRC). Secure attachment is verified with microswitches and a small camera called StowCam, and then the Head is detached from the arm. The arm is stowed and the SRC is closed and sealed. With the sample safely stowed and ready for return, OSIRIS-REx prepares for the two-and-a-half year journey from Bennu back to Earth.