In my last report (sol 3111), Opportunity had completed about half (station 7) of the planned 14 stations on a looping drive and survey of outcrops here at an important site here on Matijevic Hill. With the drive to station 14 on sol 3133, we completed that big loop drive around the outcrops (Matejevic Hill is the name we have given to a part of the larger hill “Cape York,” which is an eroded and isolated remnant of the 20+-km diameter Endeavour crater, a piece of the ancient Martian crustal rocks).

Here at station 14 we have decided to do a detailed investigation of an outcrop that is well exposed and lies within an area where there is orbital remote-sensing evidence for clay minerals. These particular rocks are interesting in that they contain a lot of thin veins and alteration zones along joints (cracks) in the outcrops. Also, as you can see in the images below, up close with the Microscopic Imager the face of the outcrop appears coated with a varnish-like layer, and this in turn is part of a slab-like alteration rind that gives the outcrop the characteristic scaly appearance. Below that is the relatively light-toned outcrop rock. The rock itself is very fine-grained, dust-sized material with few clasts, unlike the chunkier stuff on the crest of the hill. It may be part of the impactites here on the rim of Endeavour or it could be the pre-impact country rock. Whatever it is, it is old, altered, and common on the lower flanks of the hill. More important it may be altered to clay.

Next we will likely drive to the outcrop just a few meters west and try to make sense of the contact between the two rock types that can be seen there. After that Opportunity will drive north along the loop to station 2 through 4 where we hope to determine the stratigraphic context of these rocks with respect to he chunkier impactites we saw mostly uphill. 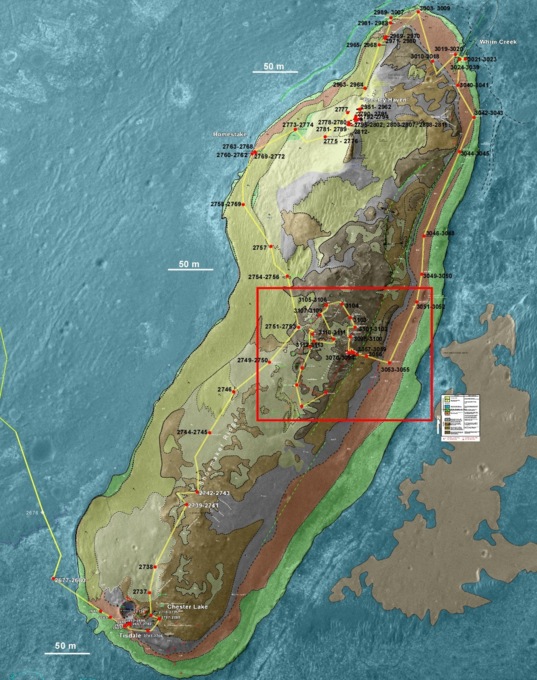 Opportunity traverse as of sol 3150

Overview of the traverse on Cape York showing the location of the detailed traverse loop as of sol 3150.

The image below is a Mars Reconnaissance Orbiter HiRISE image onto which I have mapped the geologic units that Opportunity has encountered and we have identified along its traverse. The geology is determined and mapped much like you would do here in the field in New Mexico. This map, a part of the one above, represents one of the first field geologic maps done on the surface of Mars. Contour intervals are 1 m. 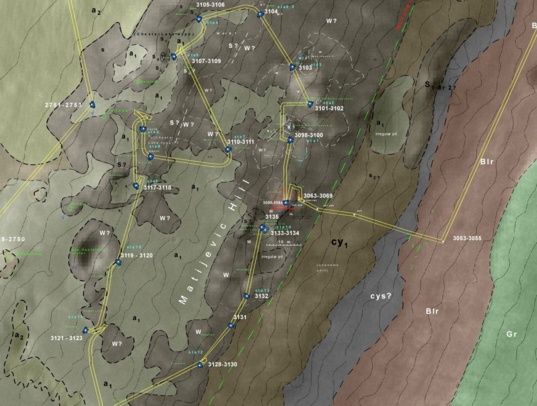 Opportunity traverse loop as of sol 3150

The image collection below gives you an idea of the types of data we acquired at each stop. This shows part of the 360 degree Navcam panorama and a couple of the high-resolution, focused Pancam color frames. Note that the outcrops here contain a lot of clasts or chunks. These have been seen elsewhere on Cape York and look like impact breccias. 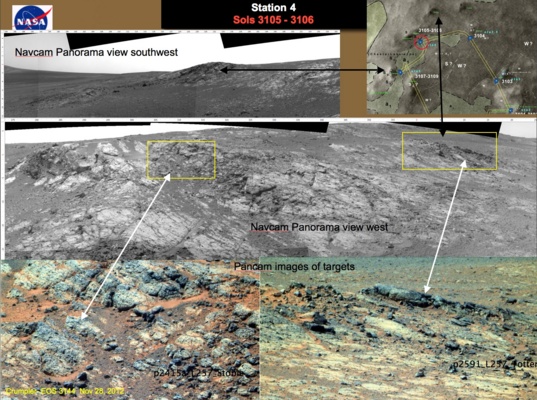 Below are a few views from the current station as of this sol, station 14, and some of the work we are doing on this outcrop.

This Navcam view looking north and along the east side of the hill shows the bright outcrop near station where we started the loop several weeks ago. On the right horizon is the far rim of Endeavour crater which is about 22 km away. 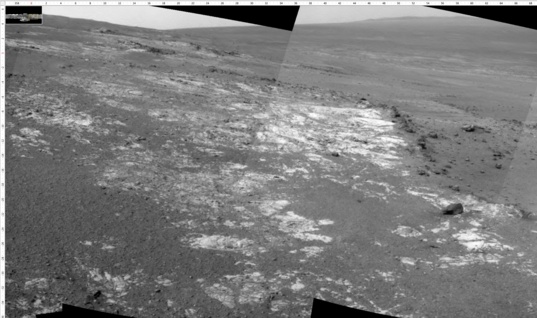 This Navcam view looks south and shows our tracks leading from station 13. In the distant is a mountain we have named  “Cape Tribulation” that is several miles away. It is a steeper and bigger version  part of the west rim south of Endeavour Crater south of Cape York. This is the currently preferred goal for the end of the coming Martian summer. But we need to finish our work here on Cape York first. 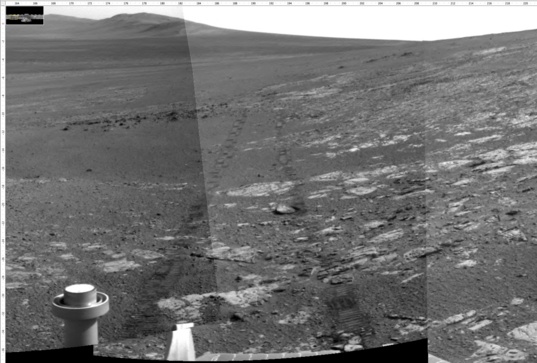 This Navcam view looks west and up hill shows the outcrop in front of us. 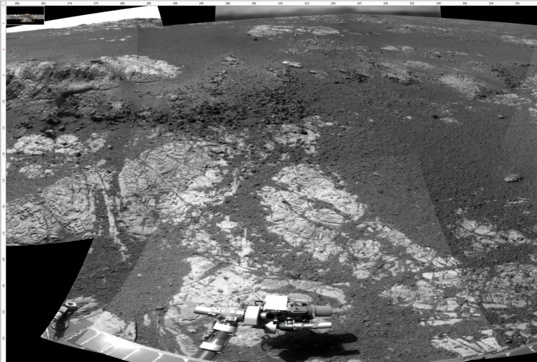 This is from the front Hazcam and shows the RAT poised above the outcrop after a successful grind. 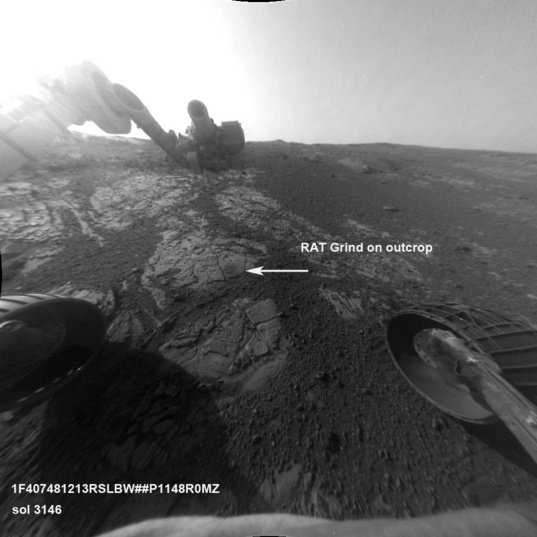 Before the grind, we did a RAT “brush,” which reveals the varnish fairly well. The images on the left are from the Microscopic Imager and the color image on the right is from the Pancam. 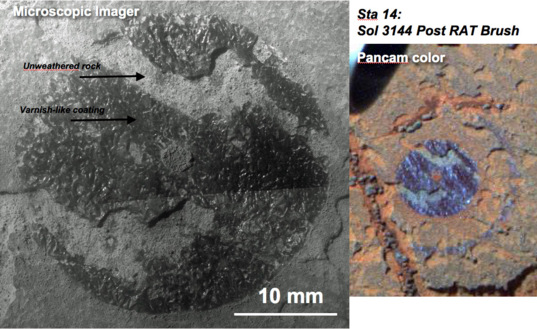 The figure below shows same sequence of images showing the outcrop target after the RAT grind. 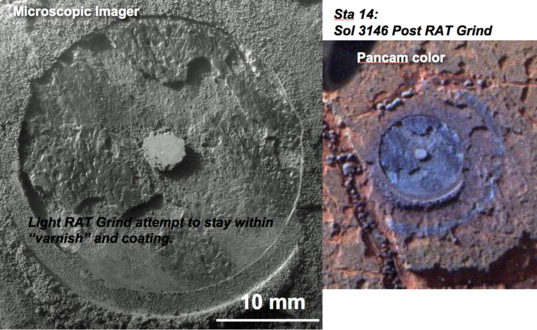