It's a sultry night in July. You've fallen asleep in the armchair. Abruptly, you startle awake, disoriented. The television set is on, but not the sound. You strain to understand what you're seeing. Two ghostly white figures in coveralls and helmets are softly dancing under a pitch- black sky. They make strange little skipping motions, which propel them upward amid barely perceptible clouds of dust. But something is wrong. They take too long to come down. Encumbered as they are, they seem to be flying—a little. You rub your eyes, but the dreamlike tableau persists.

Of all the events surrounding Apollo 11's landing on the Moon on July 20, 1969, my most vivid recollection is its unreal quality. Yes, it was an astonishing technological achievement and a triumph for the United States. Yes, the astronauts—Neil Armstrong, Buzz Aldrin and Mike Collins, the last keeping solitary vigil in lunar orbit—displayed death-defying courage. Yes, as Armstrong said as he first alighted, this was a historic step for the human species. But if you turned off the byplay between Mission Control and the Sea of Tranquility, with its deliberately mundane and routine chatter, and stared into that black-and-white television monitor, you could glimpse that we humans had entered the realm of myth and legend.

We knew the Moon from our earliest days. It was there when our ancestors descended from the trees into the savannahs, when we learned to walk upright, when we first devised stone tools, when we domesticated fire, when we invented agriculture and built cities and set out to subdue the Earth. Folklore and popular songs celebrate a mysterious connection between the Moon and love. Especially when we lived out-of-doors, it was a major—if oddly intangible—presence in our lives.

The Moon was a metaphor for the unattainable: "You might as well ask for the Moon," they used to say. For most of our history, we had no idea what it was. A spirit? A god? A thing? It didn't look like something big far away, but more like something small nearby—something the size of a plate, maybe, hanging in the sky a little above our heads. Walking on the Moon would have seemed a screwball idea; it made more sense to imagine somehow climbing up into the sky on a ladder or on the back of a giant bird, grabbing the Moon and bringing it down to Earth. Nobody ever succeeded, although there were myths aplenty about heroes who had tried.

Not until a few centuries ago did the idea of the Moon as a place, a quarter million miles away, gain wide currency. And in that brief flicker of time, we've gone from the earliest steps in understanding the Moon's nature to walking and joyriding on its surface. We calculated how objects move in space; liquefied oxygen from the air; invented big rockets, telemetry, reliable electronics, inertial guidance and much else. Then we sailed out into the sky.

The Moon is no longer unattainable. A dozen humans, all Americans, have made those odd bounding motions they called "moonwalks" on the crunchy, cratered, ancient gray lava- beginning on that July day in 1969. But since 1972, no one from any nation has ventured back. Indeed, none of us has gone anywhere since the glory days of Apollo except into low Earth orbit—like a toddler who takes a few tentative steps outward and then, breathless, retreats to the safety of his mother's skirts.

Once upon a time, we soared into the solar system. For a few years. Then we hurried back. Why? What happened? What was Apollo really about?

The scope and audacity of John Kennedy's May 25, 1961, message to a joint session of Congress on "Urgent National Needs"—the speech that launched the Apollo program—dazzled me. We would use rockets not yet designed and alloys not yet conceived, navigation and docking schemes not yet devised, in order to send a man to an unknown world—

a world not yet explored, not even in a preliminary way, not even by robots—and we would bring him safely back, and we would do it before the decade was over. This confident pronouncement was made before any American had even achieved Earth orbit.

As a newly minted PhD, I actually thought all this had something centrally to do with science. But President Kennedy did not talk about discovering the origin of the Moon, or even about bringing samples of it back for study. All he seemed to be interested in was sending someone there and bringing him home. It was a kind of gesture. Kennedy's science advisor, Jerome Wiesner, later told me he had made a deal with the president: if Kennedy would not claim that Apollo was about science, then he, Wiesner, would support it. So if not science, what?

The Apollo program is really about politics, others told me. This sounded more promising. Nonaligned nations would be tempted to drift toward the Soviet Union if it was ahead in space exploration, if the U.S. showed insufficient "national vigor." I didn't follow. Here was the United States, ahead of the Soviet Union in virtually every area of technology—the world's economic, military and, on occasion, even moral leader—and Indonesia would go Communist because Yuri Gagarin beat John Glenn to Earth orbit? What's so special about space technology? Suddenly I understood.

Sending people to orbit the Earth or robots to orbit the Sun requires rockets-big, reliable, powerful rockets. Those same rockets can be used for nuclear war. The same technology that transports a man to the Moon can carry nuclear warheads halfway around the world. The same technology that puts an astronomer and a telescope in Earth orbit can also put up a laser "battle station."

Even back then, there was fanciful talk in military circles, East and West, about space as the new "high ground," about the nation that "controlled" space "controlling" the Earth. Of course strategic rockets were already being tested on Earth. But heaving a ballistic missile with a dummy warhead into a target zone in the middle of the Pacific Ocean doesn't buy much glory. Sending people into space captures the attention and imagination of the world. You wouldn't spend the money to launch astronauts for this reason alone, but of all the ways of demonstrating rocket potency, this one works best. It was a rite of national manhood; the shape of the boosters made this point readily understood without anyone actually having to explain it. The communication seemed to be transmitted from unconscious mind to unconscious mind without the higher mental faculties catching a whiff of what was going on.

When President Kennedy formulated the Apollo program, the Defense Department had a slew of space projects under development—ways of carrying military personnel up into space, ways of conveying them around the Earth, robot weapons on orbiting platforms intended to shoot down satellites and ballistic missiles of other nations. Apollo supplanted these programs. They never reached operational status. A case can be made then that Apollo served another purpose—to move the US-Soviet space competition from a military to a civilian arena. There are some who believe that Kennedy intended Apollo as a substitute for an arms race in space. Maybe.

Six more missions followed Apollo 11, all but one of which successfully landed on the lunar surface. Apollo 17 was the first to carry a scientist. As soon as he got there, the program was canceled. The first scientist and the last human to land on the Moon were the same person. The program had already served its purpose that July night in 1969. The half-dozen subsequent missions were just momentum. 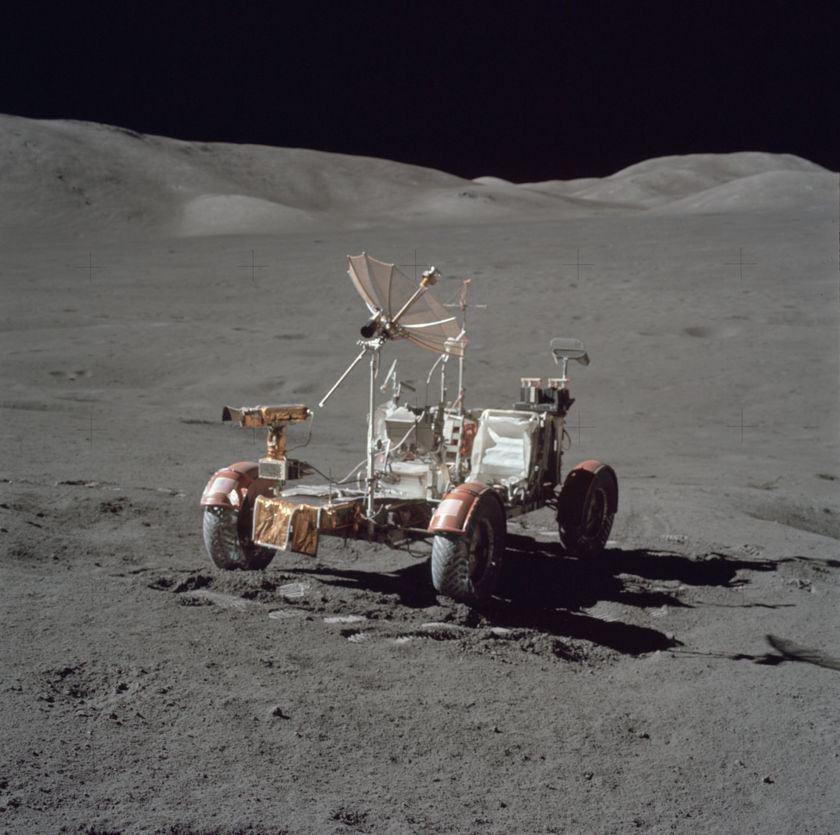 The Apollo 17 lunar rover is seen here during Gene Cernan and Harrison Schmitt's third and final EVA on 13 and 14 December 1972. The rover covered a distance of 35.74 kilometers in total.

Apollo was not mainly about science. It was not even mainly about space. Apollo was about ideological confrontation and nuclear war—often described by such euphemisms as world "leadership" and national "prestige." Nevertheless, good space science was done. We now know much more about the composition, age and history of the Moon and the origin of the lunar landforms. We have made progress in understanding where the Moon came from. Some of us have used lunar cratering statistics to better understand the Earth at the time of the origin of life. But more important than any of this, Apollo provided an aegis, an umbrella under which brilliantly engineered robot spacecraft were dispatched throughout the solar system, making that preliminary reconnaissance of dozens of new worlds. The offspring of Apollo have now reached the planetary frontiers.

If not for Apollo—and, therefore, if not for the political purpose it served—I doubt whether the historic American expeditions of exploration and discovery throughout the solar system would have occurred. The Mariners, Vikings, Voyagers, Magellan, Galileo and Cassini are among the gifts of Apollo. Something similar is true for the pioneering Soviet efforts in solar system exploration, including the first soft landings of robot spacecraft—Luna 9, Mars 3, Venera 8—on other worlds.

Apollo conveyed a confidence, energy and breadth of vision that did capture the imagination of the world. That too was part of its purpose. It inspired an optimism about technology, an enthusiasm for the future. If we could go to the Moon, what else was now possible? Even those who were not admirers of the United States readily acknowledged that—whatever the underlying reason for the program—the nation had, with Apollo, achieved greatness.

When you pack your bags for a big trip, you never know what's in store for you. The Apollo astronauts on their way to and from the Moon photographed their home planet. It was a natural thing to do, but it had consequences that few foresaw. For the first time, the inhabitants of Earth could see their world from above—the whole Earth, Earth in color, Earth as an exquisite spinning white and blue ball set against the vast darkness of space. Those images helped awaken our slumbering planetary consciousness. They provide incontestable evidence that we all share the same vulnerable planet. They remind us of what is important and what is not.

We may have found that perspective just in time, just as our technology threatens the habitability of our world. Whatever the reason we first mustered the Apollo program, however mired it was in Cold War nationalism and the instruments of death, the inescapable recognition of the unity and fragility of Earth is its clear and luminous dividend, the unexpected final gift of Apollo. What began in deadly competition has helped us to see that global cooperation is the essential precondition for our survival.

It's time to hit the road again.

This article was adapted from a chapter Carl Sagan's book, Pale Blue Dot: A Vision ofthe Human Future in Space. 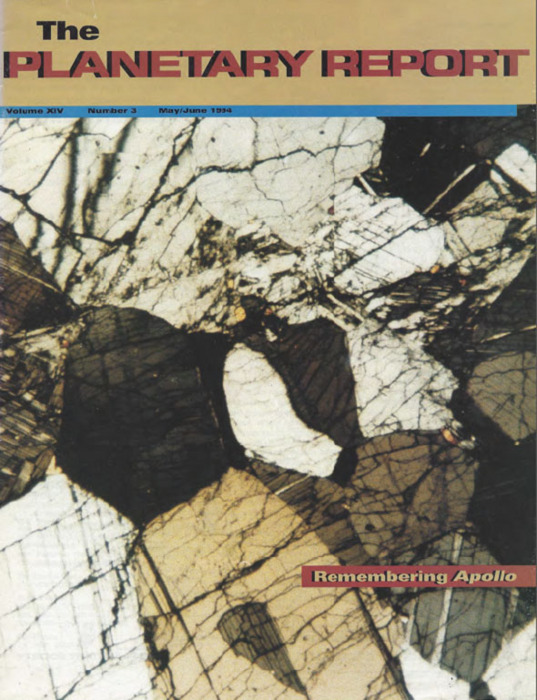 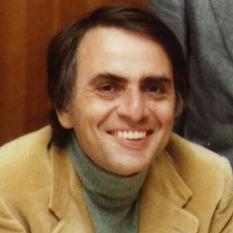