A Turn of the Kaleidoscope

"You know what Mars is? It's like a thing I got for Christmas seventy years ago--don't know if you ever had one--they called them kaleidoscopes, bits of crystal and cloth and beads and pretty junk. You held it up to the sunlight and looked in through at it, and it took your breath away. All the patterns! Well, that's Mars. Enjoy it."

We have some fresh of views the fourth planet. I've been wandering through the landscapes found in these new images, because Mars always rewards visitors, even as it teases them by hinting at things just unseen. And because, like a kaleidoscope, the beauties of the place are often fresh and surprising every time they're seen in a new light.

These latest shots come from Europe's Mars Express mission, which has added a brand-new batch of data to its online archive. The orbit that Mars Express traces swings it over the poles, which affords spectacular views of the ice caps.

The south pole of Mars, as seen by the Mars Express orbiter in infrared, green, and blue light.

As sharp as that image is, at this scale you still can't see the famous "spider" or "swiss cheese" terrain found on the southern polar cap.

Orbital images are not always static landscapes. The Mariner and Viking probes saw planet-wide storm fronts move across the face of Mars. The Mars Reconnaissance Orbiter has caught dust devils and avalanches in the act. Here, Mars Express spies an eclipse: the shadow thrown by the moon Phobos as it passes between Mars and the sun. 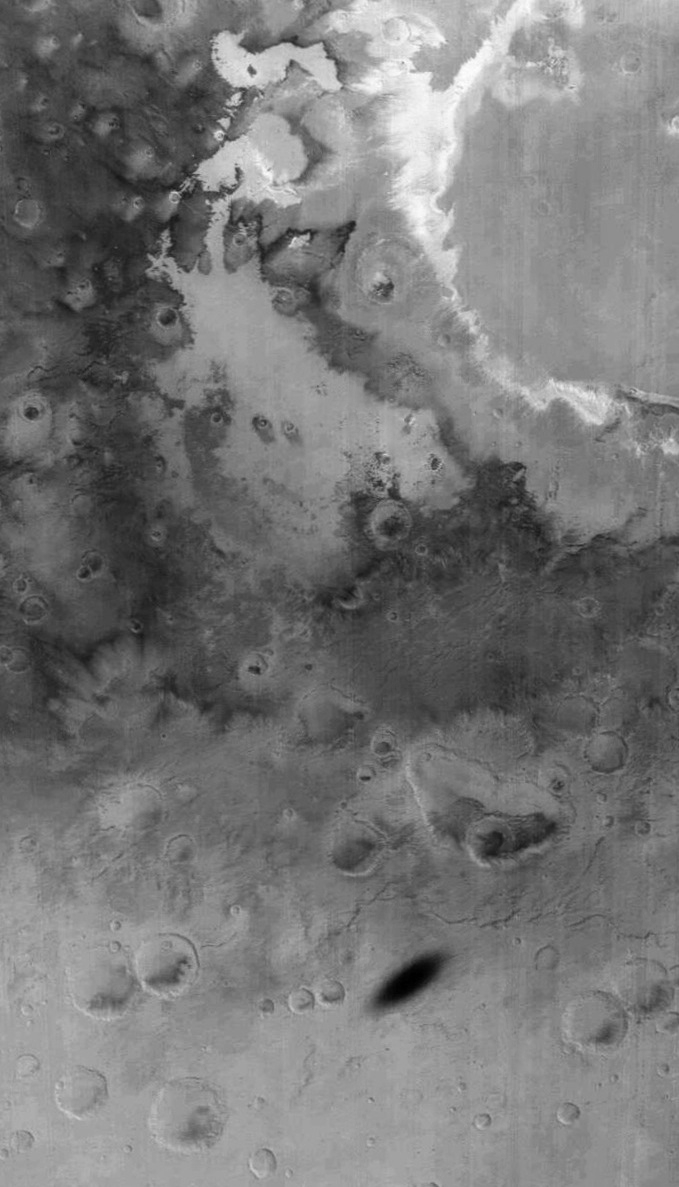 The Mars Express orbiter catches Phobos casting a shadow just south of Schiaparelli Crater (the large basin at the upper right). Schiaparelli, located near the Martian equator, is 461 kilometers in diameter. The image has been processed to remove some of the vertical banding.

We'll be back to Mars again and again. We'll probably never see everything it has to reveal.

I have a book titled Mars from Myth and Mystery to Recent Discoveries by Markus Hotakainen. In this book on page 58 he says that one instrument there is MARSIS (Mars Advanced Radar for Subsurface and Ionospheric Sounding). My question is has this instrument detected any underground caverns or tunnels etc. and where could I find more information about them as this would protect any possible microbes from radiation and be a better environment for life.

I'm not aware of caverns detected by MARSIS, but there is more information about it here: http://www.esa.int/Our_Activities/Space_Science/Mars_Express/Mars_Express_instruments Coincidentally, the featured image today on ESA's website is a MARSIS image I first featured in a post on this site: http://spaceinimages.esa.int/Images/2013/08/A_slice_through_the_southern_highlands_of_Mars

I suppose it is conceivable that there could be underground caves that may have been carved out millions of years ago from the now frozen solid ocean at the South Pole. However I have not read/heard of any detected caverns by the radar returns either. That's not to say that they can't be there, maybe just below the radar range ability.

Thanks for the information guys. Hopefully more caves or tunnels will be found some other way but I have heard that something like caves have been found called pit craters such as on Arsia Mons.

If that's the case then it would be intriguing. I heard from an ear;y 90's neighbor that her boyfriend (geologist) found such a class of feature off of the center of LA close to the ocean floor on a research sub dive he took. So that also suggests that maybe this type of a feature could be associated with the Martian Southern ocean.Of course it should be a filled tube of ice so detecting it may be a bit challenging with current technology. Time will tell.

There exist lava tubes on Mars, at least, see http://www.space.com/18519-mars-caves-lava-tubes-photos.html It's plausible, that there exist tubes which aren't visible from the surface.

Hi, Bill, this is an amazing image! Could you please create a version of this using the red data rather than infrared? I'd like to see this image in "natural colours". Thanks :)