The first planet is rarely first in the public mind. Scorched, airless Mercury doesn't get nearly the same amount of attention as Mars or the shimmering splendors of Saturn.

But Mercury is worth exploring, both for scientists who want to understand how worlds work--and for anyone who enjoys the beauty of nature. Mercury's beauty is stark, to be sure. Desperately stark. But those bare landscapes reveal striking geometric forms even as they hide scientific secrets, such as exactly how the sun blasts away the surface in some locations to vaporize the rock itself, leaving behind the famous blue 'hollows.'

Now there's a new way to see the sights of Mercury. The robotic spacecraft known as MESSENGER has been orbiting the planet since 2011. It has snapped more than 150,000 images of Mercury's tortured surface, most of which are available to the public. MESSENGER carries more than cameras, though. Among the other instruments along for the ride is a laser altimeter that can map the surface height with an accuracy of 30 centimeters. Mercury explorers have combined that height data with the photos to create a 3D model of much of the planet.

At the MESSENGER web site, anyone can use the QuickMap feature to see the pictures and explore the 3D landscapes. For example, here's a new angle on Victoria Rupes, a dramatic cliff hundreds of kilometers long, complete with volcanic vents, that formed as Mercury shrank while it cooled. 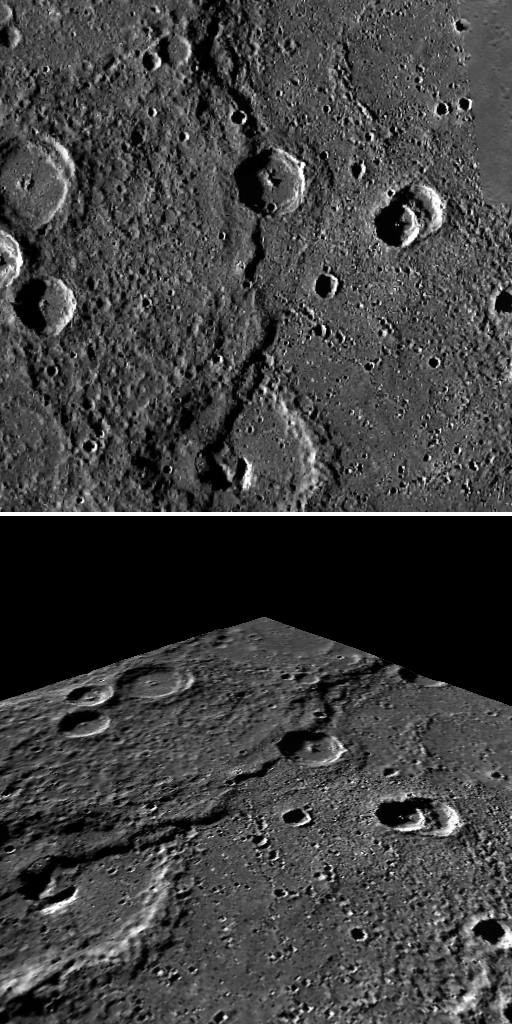 Two views from the MESSENGER spacecraft of Mercury's Victoria Rupes, a long cliff that resulted when the planet shrank as it cooled. The second angle is made possible by combining visual photography with elevation data obtained by the orbiter. Anyone can now browse these 3D views at the MESSENGER web site.

Here we see a giant impact basin about 290 kilometers across. Named for the composer, Rachmaninoff features a set of double rims and other land forms of interest to geologists. Using the height maps, they can delve into Rachmaninoff almost literally.

Two views from the MESSENGER spacecraft of Mercury's Rachmaninoff double-ringed impact basin. The 3D fly-around is made possible by combining visual photography with elevation data obtained by the orbiter. Anyone can now browse these 3D views at the MESSENGER web site.

Visit the MESSENGER site, and take a tour--in the comfort of your own home--of a place that would kill you in a few short minutes if you went there in person. There's beauty to be found if you look.

That reminds me. I heard MESSENGER's mission was due to prematurely end. What's the deal with that?

It's a good question. The mission has already been extended, so maybe some people would argue with the word 'prematurely.' On the other hand, the orbiter could continue operations until early 2015, and could do some fantastic science during that time. (Good info here: http://www.planetary.org/blogs/emily-lakdawalla/2013/hangout-20130503-larry-nittler.html ) As far as I know, the only thing that has been said publicly is: "The team is awaiting word from NASA on a proposal for a second extended mission. In the meantime, instruments aboard the spacecraft continue to gather new data on Mercury and its environment." This site would be a good place to watch for news. Fingers crossed.

The MESSENGER team confirms: they're still awaiting word from NASA about the coming fiscal year. Meanwhile, the agency has been funding observations on a pay-as-you-go basis.