Creativity is allowing yourself to make mistakes. Art is knowing which ones to keep.

The fact that we witness scenes sent directly from Saturn and Mars on a daily basis is astounding. Think about the intricacies of flight, control, and communication that obtaining these images entails. Most of these pictures are not only scientifically interesting, but aesthetically elegant as well--and that's a testament to high art and science, and to the talented people who perform it.

Of course, not every shot sent down from space will make it onto the cover of a brochure. A thousand things can, and do, go wrong in space photography, from tricky lighting conditions, to malfunctions on the spacecraft, to dropped signals on the way back to Earth.

Last year, I posted some interesting examples of deep space imagery with photographic flaws of one kind or another. I was taken with the quirky imperfections in those pictures, and I wasn't alone. So I've collected a few more of them, pulled directly from the planetary data archives.

None of these pictures are textbook examples of photographic composition or lighting, and you'll probably never seen them featured on a space agency web site. But most of them are not exactly "mistakes," either. They're simply raw, unprocessed files, or they're exposed in an unusual way in order to highlight a certain feature, or they're just one frame from a series of images taken to capture something at exactly the right moment.

Here's an example from Saturn. At first glance it might look like a throwaway shot because it's so overexposed. But it highlights the night side of the planet, where reflected ringshine is illuminating the cloud tops. Imagine the view in that night sky. 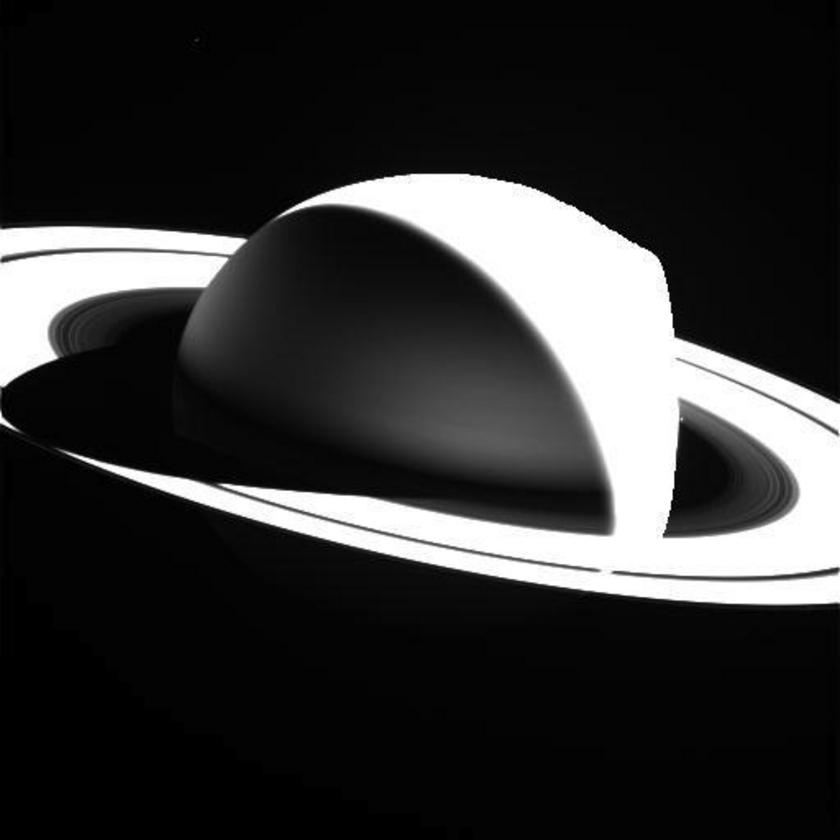 This recent Cassini image of Saturn looks a little overexposed, but all the better to show the nightside cloud tops illuminated by reflected ringshine.

You can see the same effect in this picture. In this case, it really makes for an usual take on the planet, which here looks like a plastic, textureless ball. 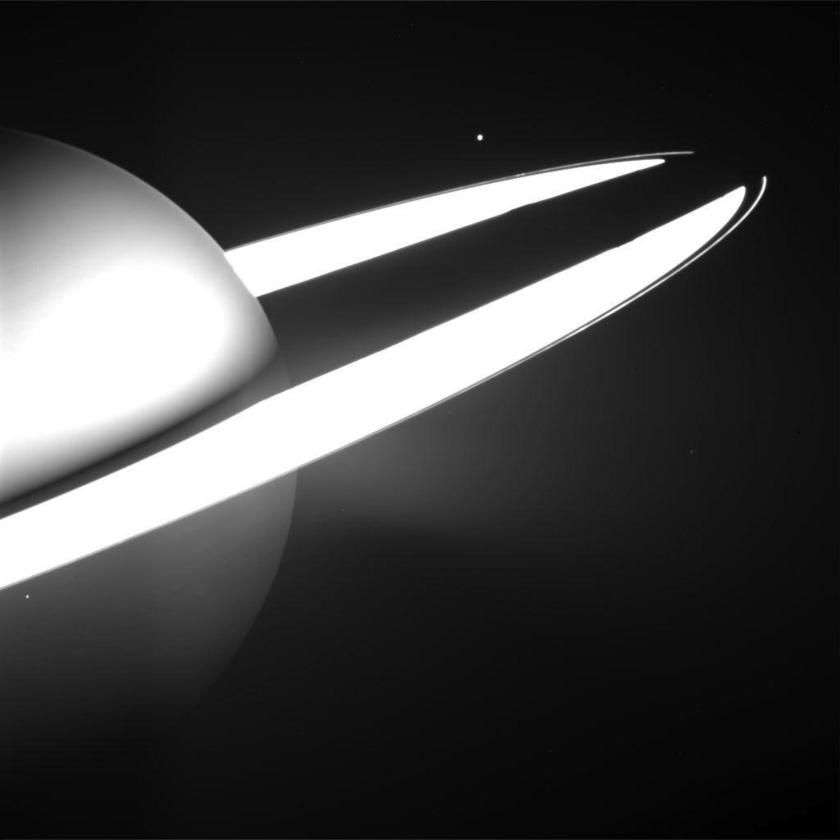 A brightly exposed image from Cassini in 2005 makes Saturn look more like a toy ornament than a real planet.

When Voyager 1 passed by Saturn in the 80s, it captured many images that revealed the world at a level of detail that scientists could previously only imagine. But not all the pictures made it across the billion-kilometer expanse in once piece. Sometimes the result is pretty striking abstract art. 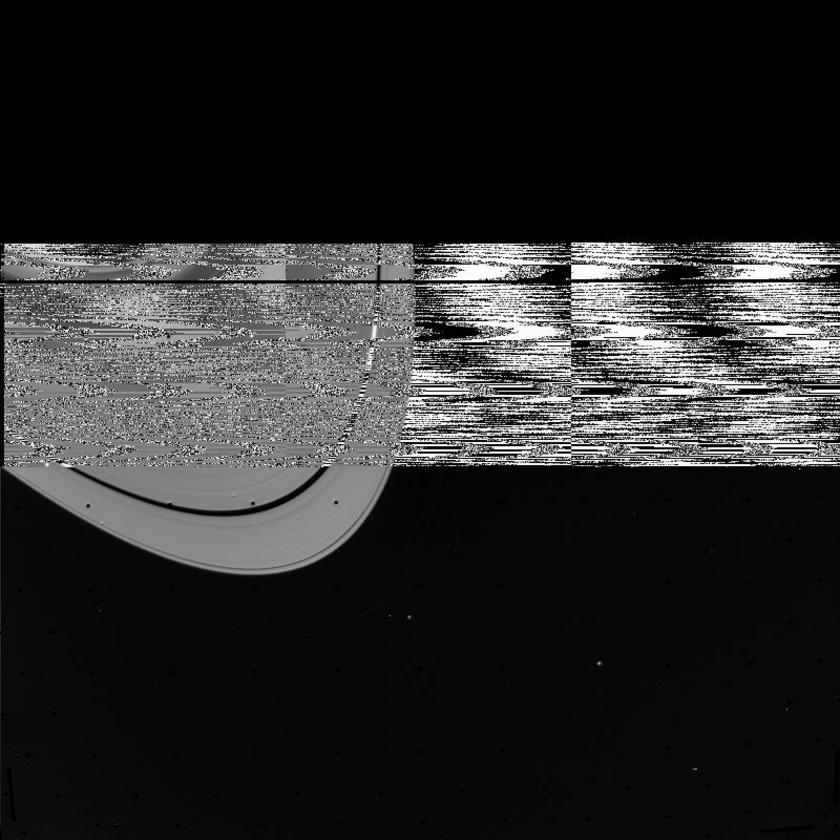 Voyager 1 returned many amazing pictures of Saturn in 1988--but not all of this one made it home.

The Martian landscapes from the Curiosity rover routinely rival any sci-fi painting. But the first few postcards it sent home wouldn't win any photography contests. Here's one from that first day on Mars. This view comes from one of the rover's hazard avoidance cameras, though it's a little hard to make out at all, since this shot was taken through a transparent lens cover that was in place to protect the camera during descent. The lens is splattered with material kicked up during the harrowing landing. This blurry shot made people in mission control, and all over the world, yell for joy when they saw it, because of what it represents: one of the first looks at a new place on an alien world, delivered by a shaken, dusty--but fully intact--robot explorer. 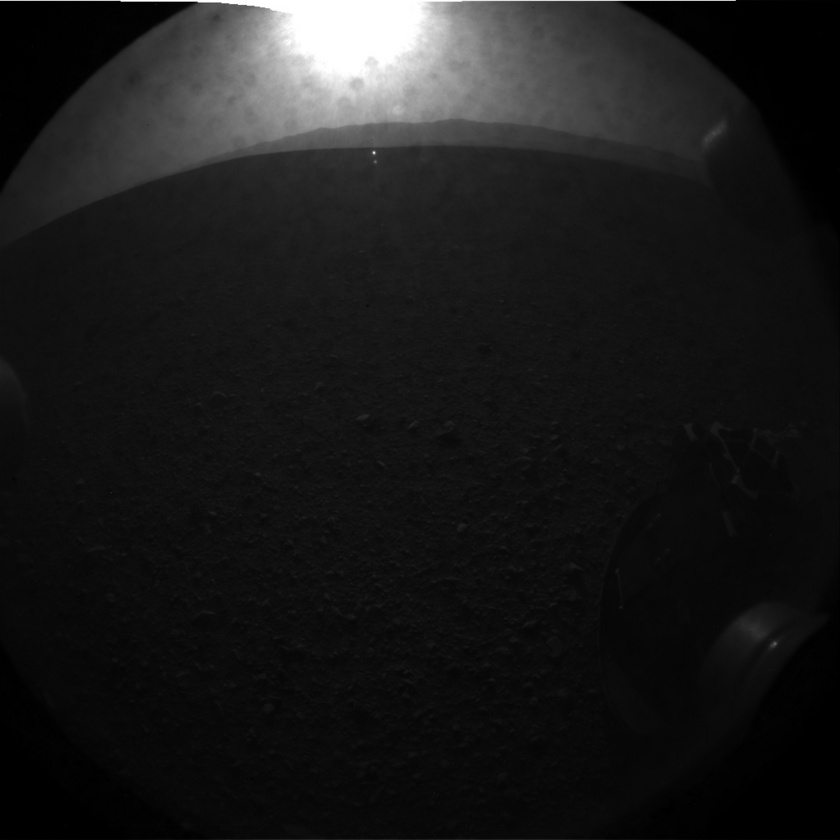 A look at the afternoon sun on Mars through a dusty protective lens cover just after the Curiosity rover landed.

Here's another scene from Mars, this time courtesy of the Mars Express orbiter. That shadowy stranger exiting stage left is the moon Phobos. Given the incredible relative speeds here, it's amazing that these kinds of shots ever work out. And yet they do. 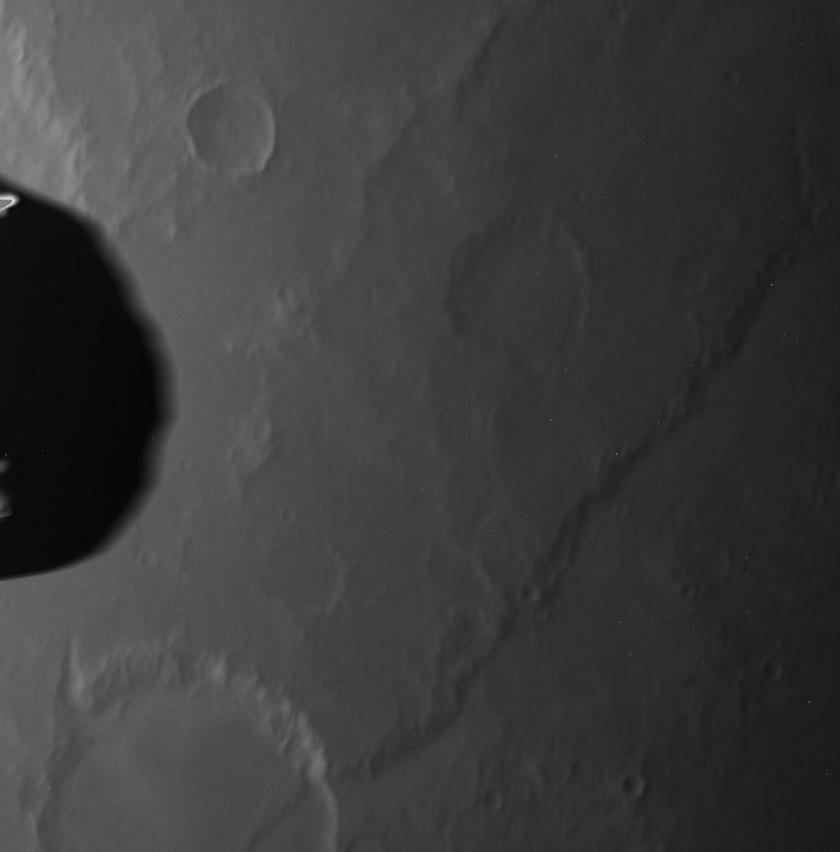 In 2008, the Mars Express spacecraft captured the moon Phobos floating over the distant surface below--just not in this particular frame.

The first time we saw the deserts of Mars from ground level was during the Viking mission. One late afternoon in October 1976 the Viking 2 lander scanned the horizon and saw this. Another image unlikely to win any prizes, but if you stood on the plains of Utopia Planitia and pulled out your phone to take a snapshot, you might not do much better. 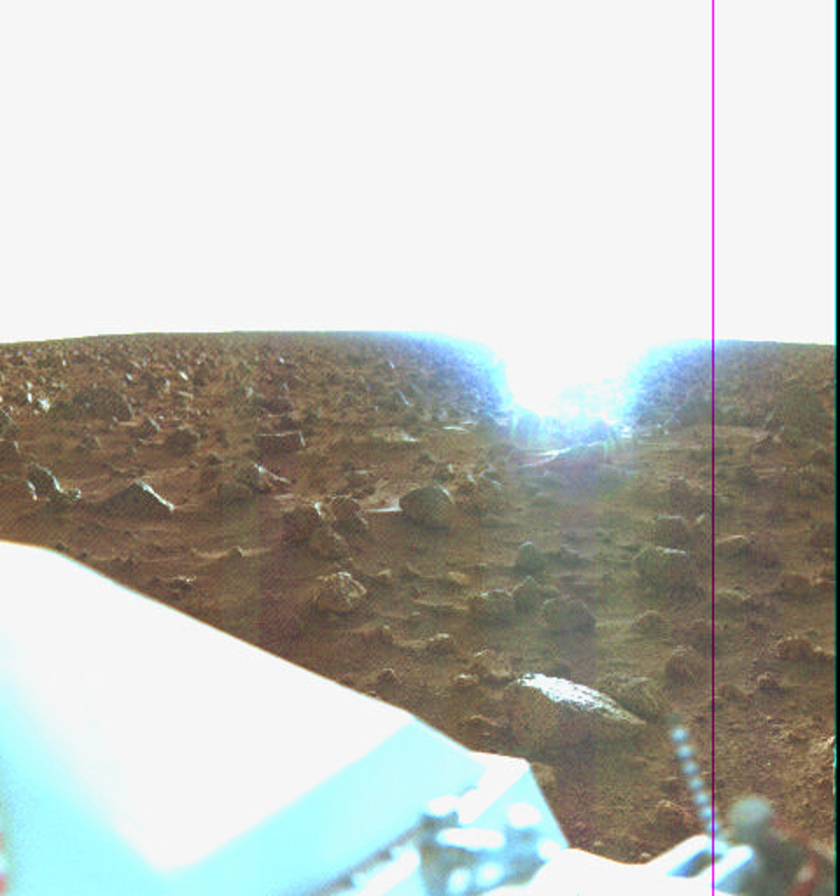 Staring into the Sun

Late in the afternoon of October 20, 1976, the Viking 2 lander surveyed the Martian horizon and the brilliant, sinking sun.

With its storms larger than the entire Earth, volcano moons, and supersized aurorae, the Jupiter system is full of bizarre scenes. They can look even weirder sometimes thanks to an overloaded image sensor. Here's an interesting closeup of the huge moon Ganymede as seen by the Galileo spacecraft. 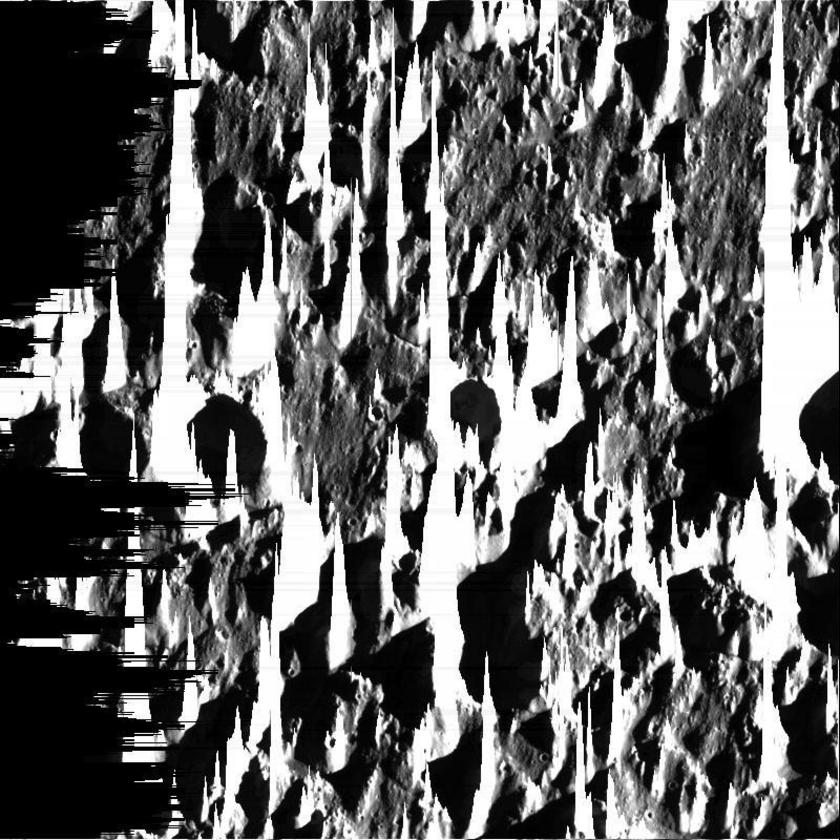 The surface of Jupiter's moon Ganymede looks even more exotic than usual in this overexposed view from the Galileo orbiter in 1996.

While exploring Jupiter's ring system, the same mission took some highly exposed photos of that delicate structure. The ice moon Europa decided to photobomb them, as seen in this series of unprocessed frames combined into a single image.

Europa and the Rings

The Galileo spacecraft caught a glimpse of Europa in the background as it studied Jupiter's ring system in 1997.

While on its way to Mercury, the MESSENGER spacecraft swung by home for a speed boost from the Earth's gravity. Scientists even compiled an animation of the encounter. But before the individual frames are cleaned up, they can look unintentionally interesting, like this shot of the planet seeming to speed through space. 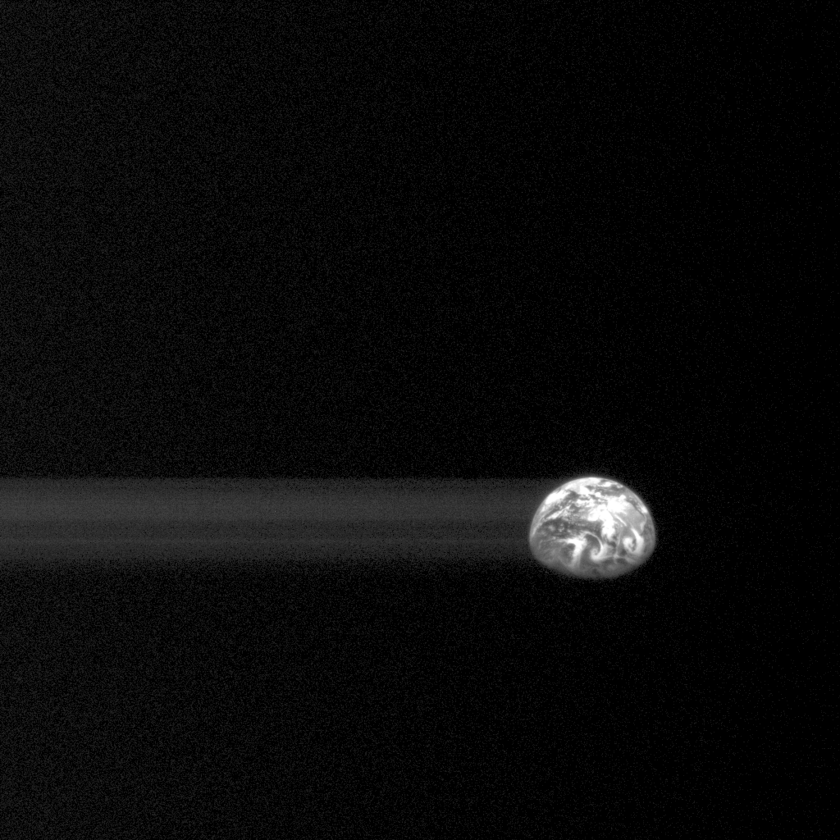 A New Definition of "Super Earth"

The Earth as seen by the MESSENGER spacecraft as it passed by on its way to Mercury.

Finally, some glitchy shots from the outer reaches of the solar system, where Voyager 2 encountered the gas giant Neptune. 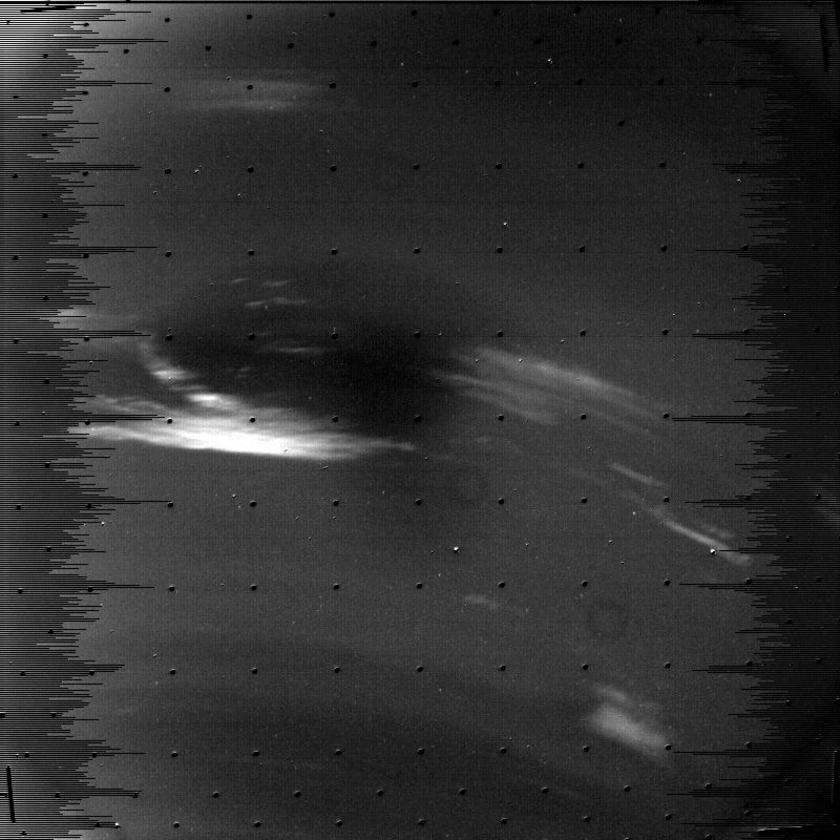 Voyager 2's unprocessed 1989 look into the maw of a giant storm in the atmosphere of Neptune.

The machines we send deep into the sky to help us explore are imperfect. So are their handlers. But I think those very same machines are things of beauty, nothing less than metallic embodiments of some of humanity's best qualities: curiosity, cooperation, audacity, peaceful ambition. The pictures they send back are the same way, and even the quirky ones are wonderful. 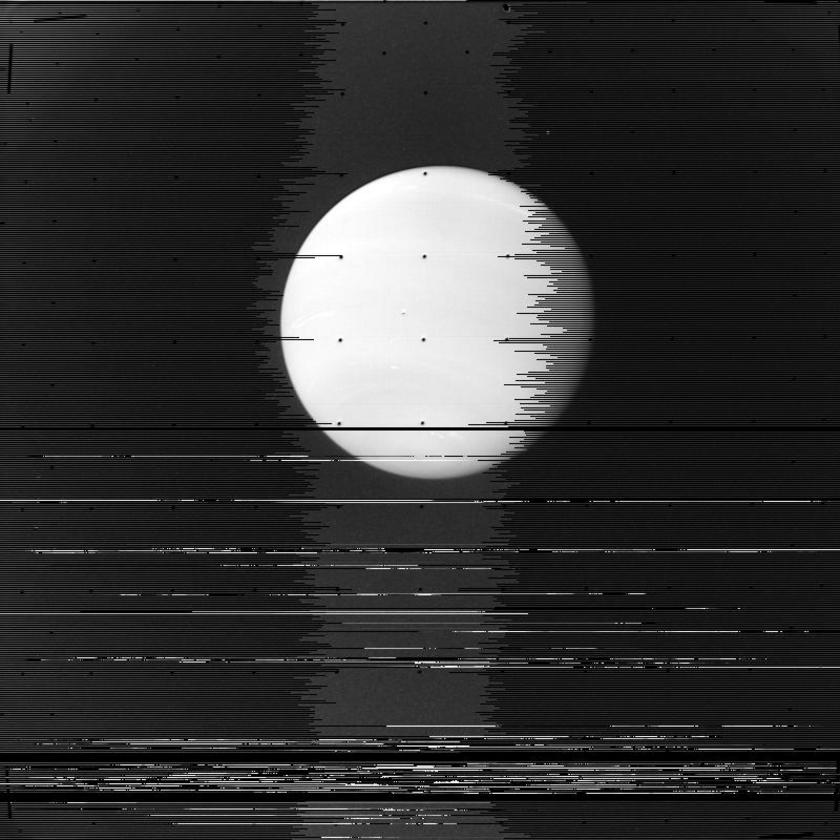 In this unprocessed image from Voyager 2 in 1989, the giant planet Neptune seems to cast a reflection on a sea of static.

Besides being interesting in their own right, these also contribute to the appreciation of the other shots that get all of the high publicity. Good choices Bill! Thanks!