A Clearer Impression of Degas Crater

“A painting requires a little mystery, some vagueness, and some fantasy. When you always make your meaning perfectly plain you end up boring people.”

Like many artists and authors, impressionist painter Edgar Degas has a crater on the planet Mercury that bears his name. For most of human history, Mercury did its best to follow the artist's advice to keep things a little vague and mysterious. The planet is notoriously difficult to observe from Earth, and a challenging target for spacecraft. It has only been during the past few years that entire surface of Mercury has been mapped, thanks to the MESSENGER spacecraft now in orbit.

MESSENGER's mission is drawing to a close, but it's sending home spectacular pictures in its final months, including some of the most detailed images of Mercury ever seen. Recently, the lowest part of MESSENGER's orbit dipped down so far that it was skimming the surface at an altitude of just 25 kilometers, barely twice the height of a commercial airliner flight. A series of rocket burns late this year and early next will raise the orbit temporarily, but in March 2015 the fuel will run out, and the spacecraft will become a permanent part of the planet it has been watching so faithfully.

In the meantime, places like Degas Crater have come into focus like never before. The Mariner 10 mission discovered Degas in the 70s. In 2012, MESSENGER glimpsed this view of the crater in the distance. 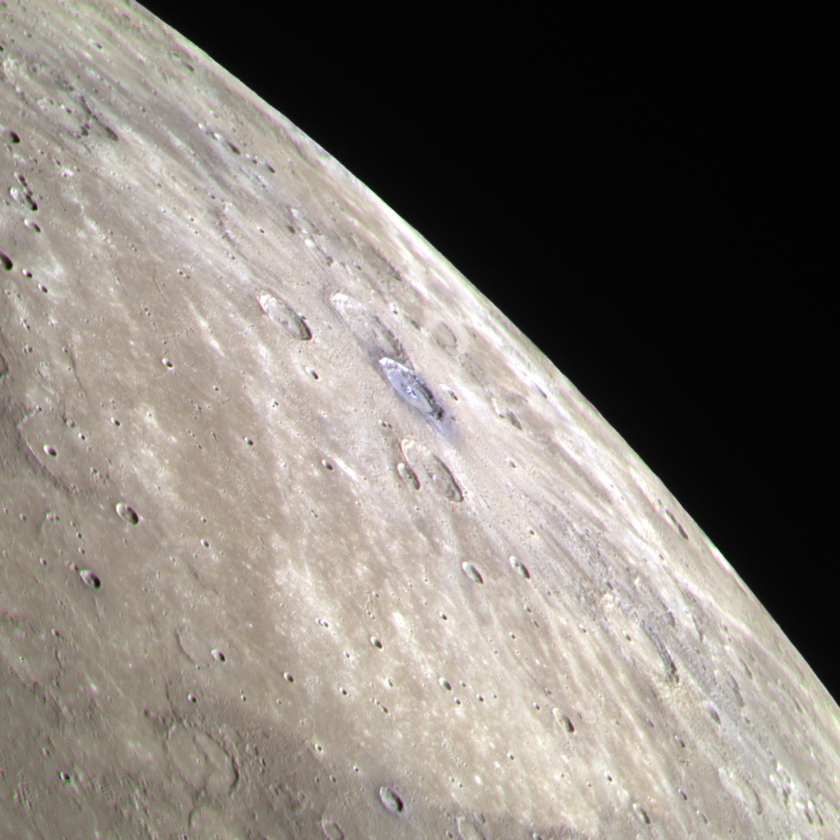 Degas on the Horizon

Enhanced color view of Degas Crater on Mercury, as imaged by the MESSENGER spacecraft. The crater is the bluish feature near the center of the frame, and measures about 55 kilometers across. At full resolution, this image shows about 533 meters per pixel.

The crater appears to be relatively young, with sharp features. Degas is ringed with dramatic cliffs, and a complex of peaks rises at the center. Bright rays extend for hundreds of kilometers around the crater, and the material that the impact exposed has a color that differs subtly from the surrounding landscape. Mercury explorers call this darker stuff simply "low reflectance material," and it's an important clue to the planet's geologic history. 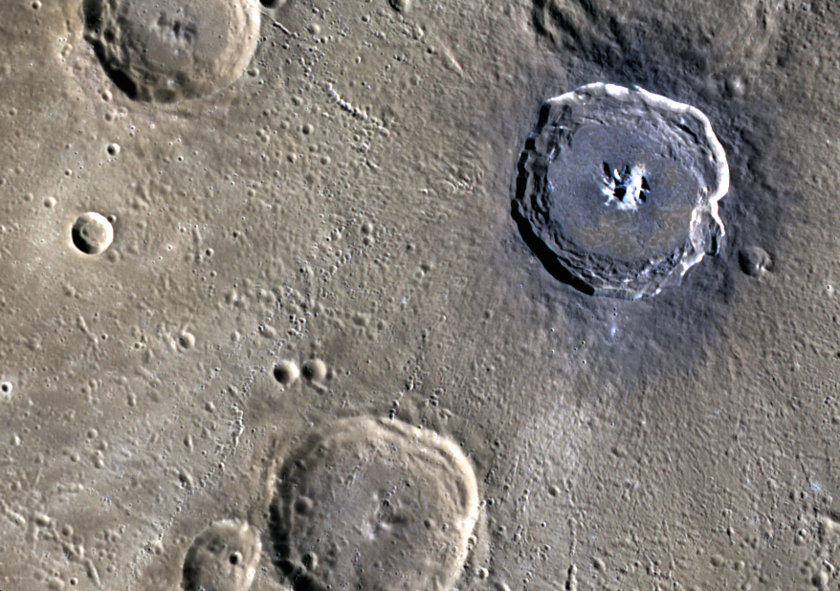 Mercury's Degas crater reflects a bright blue hue in this enhanced-color image from the MESSENGER orbiter. At full resolution, this image shows about 231 meters per pixel. Steep crater walls, central peaks, and striations on the crater floor are visible at this scale.

Earlier this year, MESSENGER passed above Degas at a low altitude and managed to take a series of photos with a resolution of just 11 meters per pixel. The data containing these images has just been released. They are sharp enough that if you had a winter home on the Sobkou plains where Degas is found, we could make out its shape in these views.

Here's a look at the crater's edge. At this scale, it's no longer just a line, but a complex feature with layered rock and places where material is flowing downhill. At the base of the cliffs, molten rock has cooled into smooth pools of stone. 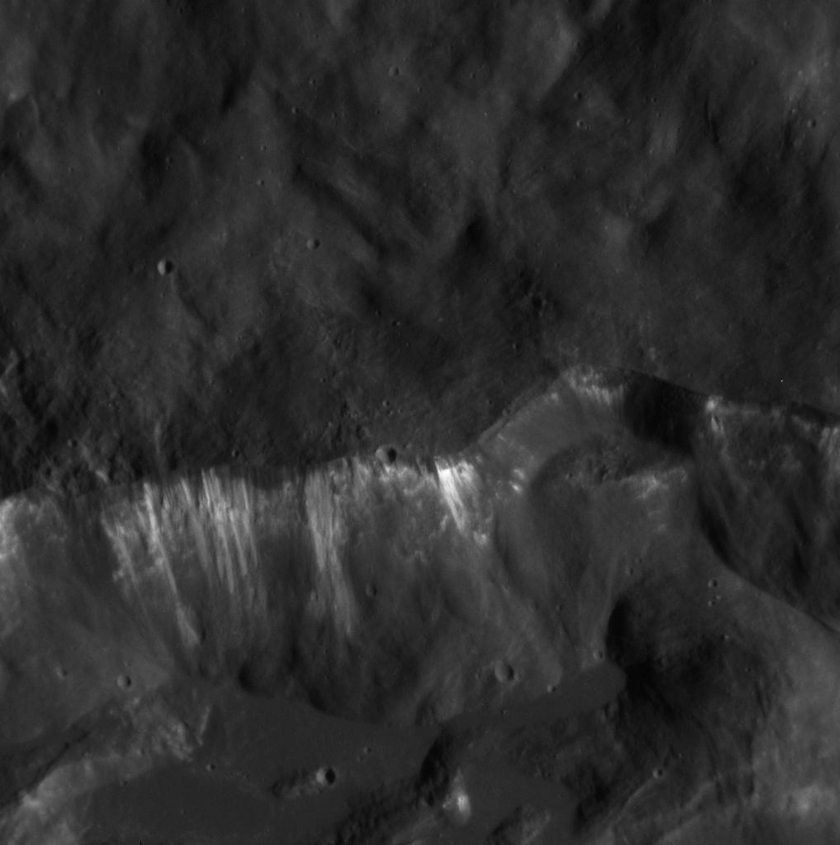 An image from the MESSENGER orbiter at a resolution of about 11 meters per pixel reveals fine details in the high crater walls of Degas on Mercury.

But the most dramatic views include the crater's center. The plain is slashed with fissures several meters deep, formed when impact melt cooled. The steep slopes of the central peaks reveal fine details, including avalanches of material flowing down the sides. Right at the center is an example of one of Mercury's strangest features, "hollows," where it appears that the rock itself has sublimated under the intense bombardment of the nearby sun. 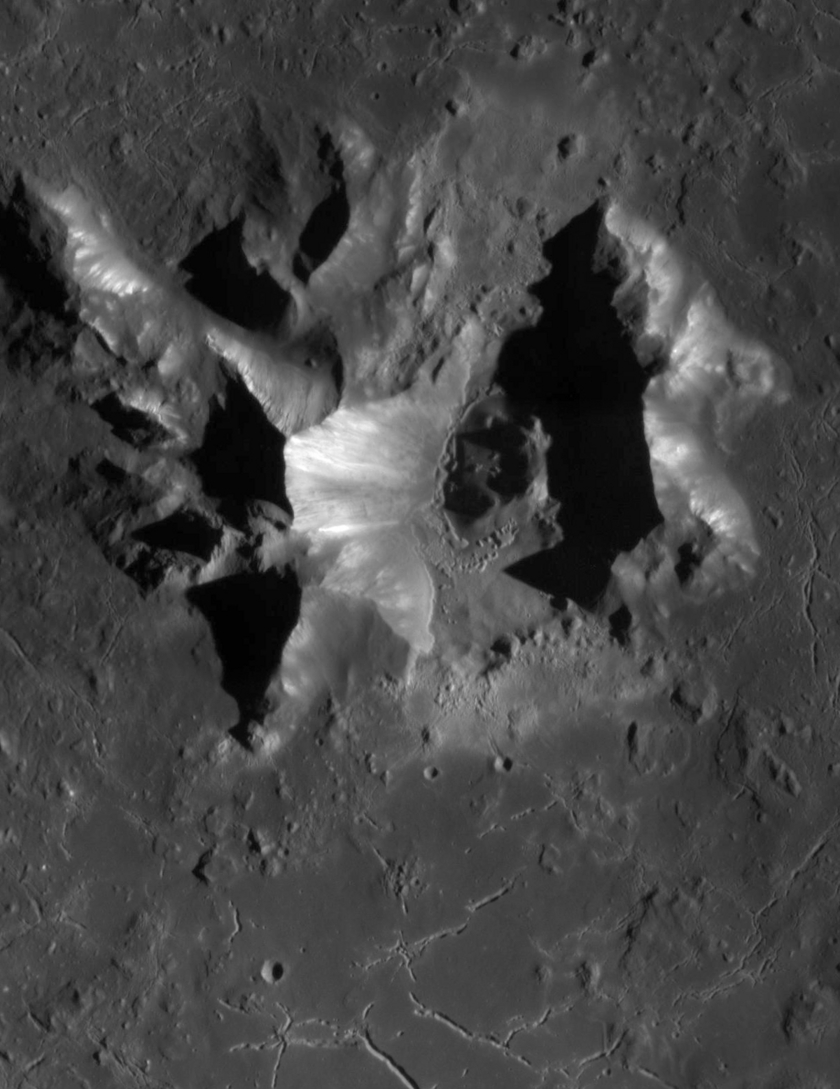 A mosaic of MESSENGER images showing the center of Mercury's Degas Crater at a resolution of about 11 meters per pixel. A wide variety of geologic features comes into view at this scale, including material moving down steep slopes, hollows, and fissures likely formed when pools of molten rock on the crater floor cooled.

While these looks at Mercury are sharp enough to rival the orbital views we have of our own Moon, Mr. Degas needn't worry--there is still more than enough room for mystery. How exactly do the hollows really form? What is the nature of the low reflectance material? Scientists are still grappling with questions, many of which might have to wait all the way until 2023, the scheduled arrival of the only other planned Mercury mission, ESA's BepiColombo.

In the meantime, we're free to visually wander over landscapes that are utterly new to human experience. Maybe even indulge in a little mystery, some vagueness, and some fantasy.

In recent times a number of small bodies in our solar system have been found to be a mixture of rock and volatiles. We know from 67P that a large amount of very dark material is carried on the surface. The hollows could be from sublimation of the volatiles buried within the colliding object.

Bill, Thanks for the great views and accompanying captions!