My Own Corner of Mars

On the 16th of February, at 3:16 pm (local Mars time), a robotic spacecraft orbiting the Red Planet trained its most powerful camera on the surface. It captured an image so detailed that if someone were standing there waving you could see their shadow.

This dune field inside a crater, on the floor of an ancient river bed, is one small part of that picture. Why did NASA engineers radio commands across 60 million miles of space in order to point the multi-million-dollar spacecraft at this particular spot?

Because I told them to. 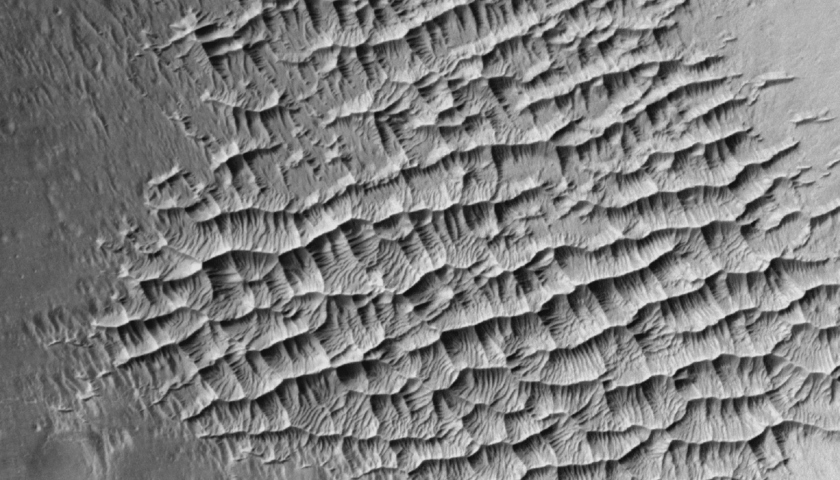 Ripples in the Valley

A field of ripples within a crater in Verde Vallis, an ancient river bed on Mars. This scene, about 500 meters across, is a small part of a high-resolution observation from the HiRISE camera aboard the Mars Reconnaissance Orbiter.

So how did that happen? I am not a member of the teams that manage the Mars Reconnaissance Orbiter (MRO) or the High Resolution Imaging Science Experiment (HiRISE) camera that took this image. I'm not even a scientist or an engineer. How was I able to play a role in selecting this target?

The HiRISE team runs what I think is one of the most compelling programs in all of space exploration. It's called HiWish, and it allows anyone to suggest a spot on Mars where the HiRISE instrument should take an image. All it takes is a visit to the HiWish web site, where you can browse a map of the planet to see which areas have already been observed and which are still ripe for exploration.

After selecting a target, and entering a brief explanation of why that particular spot interests you, you can submit your suggestion. If it's accepted, you will have personally helped select one of the next places on Mars that we see, often for the first time ever, at the extremely high resolution of HiRISE images. The results of a HiWish can be pretty spectacular.

Not surprisingly, there are thousands of suggestions in the queue at any one time, and not all of them can be pursued. A spacecraft like MRO is a rare and powerful asset, and teams of scientists and engineers work in tandem to carefully plan the robotic explorer's every move. What can you do to raise your own suggestion's odds?

According to Sarah Milkovich, HiRISE investigation scientist, the key is to provide a compelling rationale. If you're asking for yet another shot of the famous (infamous?) "face" in Cydonia, Dr. Milkovich says, well, that's been done. She says what the team is looking for are previously un-imaged areas, or places that merit re-examination for specific reasons, and/or examples of interesting landforms.

The HiWish site itself is helpful here, she points out, because it asks you to categorize your submission according to one of the Mars science themes that MRO is investigating. These include areas such as:

Fluvial Processes - Images of channels, valleys, gullies, or other geologic features likely formed by erosion or deposition by water.
Future Exploration/Landing Sites - Attempts to locate known spacecraft, or to provide imagery for upcoming landed missions.
Geologic Contacts/Stratigraphy - Images of bedrock exposed within crater central peaks or pits that reveal the stratigraphy at depth, as well as geologic contacts between distinct units/materials that can be used to infer stratigraphic relationships, such as relative ages or processes of deposition.
Volcanic Processes - Features produced by molten rock, such as lava flows, ash beds, cinder cones, and volcanoes.

Besides its inherent scientific value, there are other factors in determining which targets are acquired first, such as the current Martian season and what time of day the spacecraft will be passing over the target. The process for selecting and executing an observation can be quite an adventure, and involves a great deal of coordination, skill, and maybe even a little luck between scientists and the teams who fly the spacecraft. (I'll have more about that, and an insider's look at exploring Mars with MRO, in a future post.)

Once a target has been selected, things can move pretty fast despite the complexities involved. Although it took a few months to hear back about my HiWish (the time can vary greatly), you'll notice that the spacecraft actually shot my image less than two months ago, and I'm already poring over every pixel, exploring rock faces, craters, and dune-like ripples. It's the next best thing to being there.

So, what did I find? My HiWish may not be the most showy HiRISE image ever, but Mars always has something interesting to check out. The context is an ancient river bed near the Martian equator called Verde Vallis, named after a valley in Arizona. 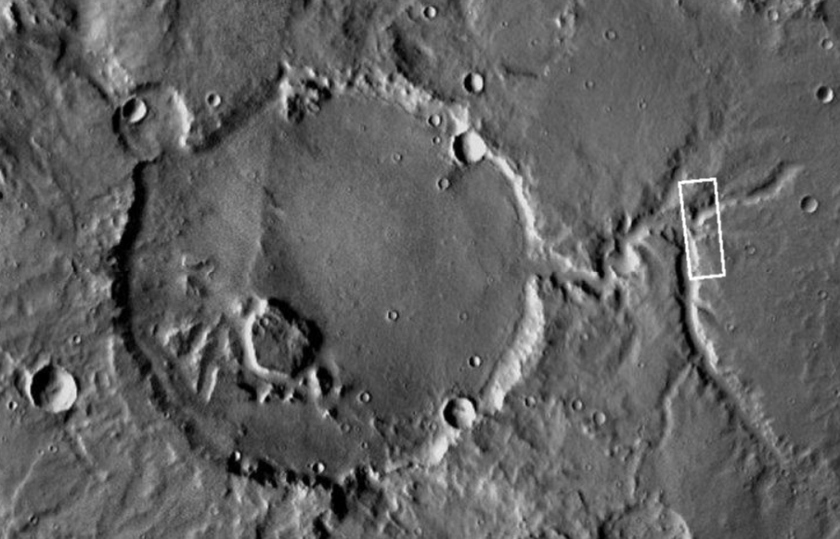 In images from MRO's context camera, I saw a point where two channels converge. I decided that might be a good place to zoom in, especially since I thought I saw interesting features such as dust devil tracks and the dark slope streaks that often form in equatorial regions.  Sure enough, that's what HiRISE saw:

The entire landscape is coated in dust, which hides some details and paints everything in that typical Martian orange. But there are a few places that are worth examining in more detail. Right in the middle of the channel there are some striking dust ripples and slope streaks. 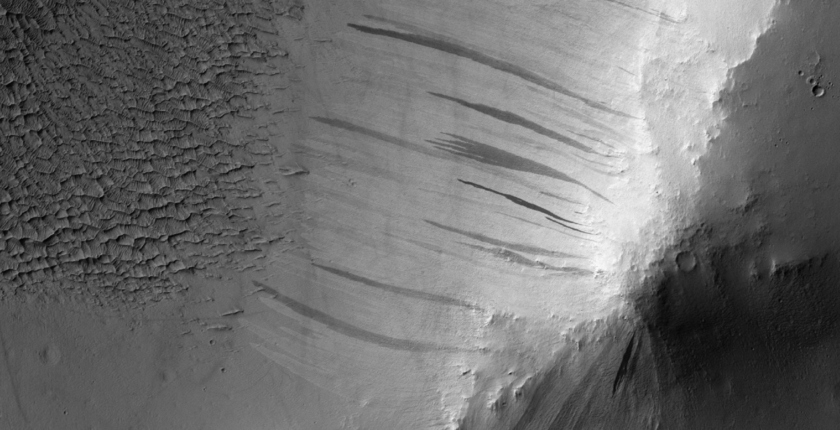 The floor of Verde Vallis

There appear to be several dark, fresh streaks alongside faded examples from the past. Most streaks like this probably result from dry avalanches, although there are places on Mars where briny water may be seeping out from underground acquifers in the rock. This observation as a whole is shot through with slope streaks, facing almost every direction of the compass. I don't know if water played a role in any of them, but it's intriguing to think about. Here are a couple of close-ups from locations on the north side of the channel: 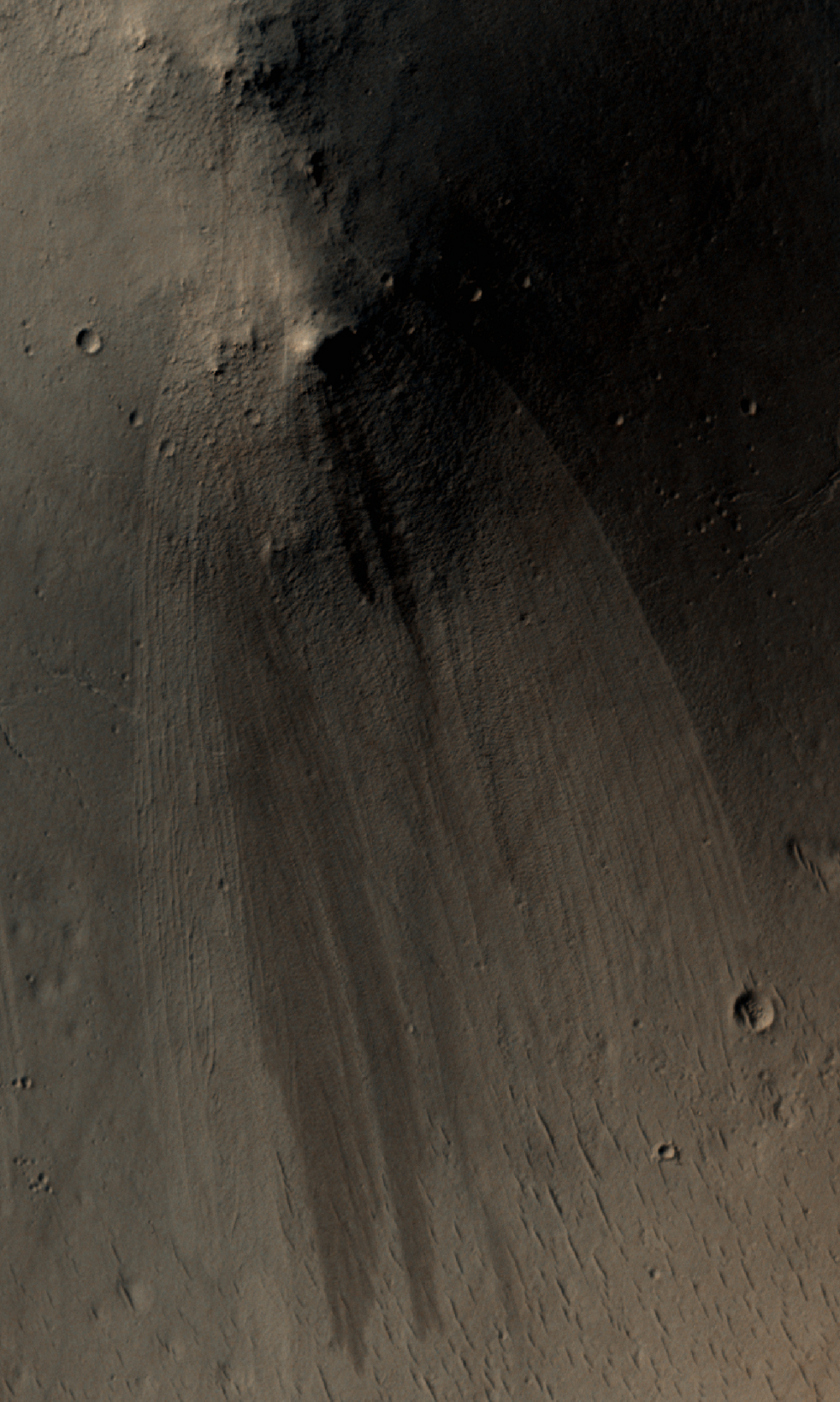 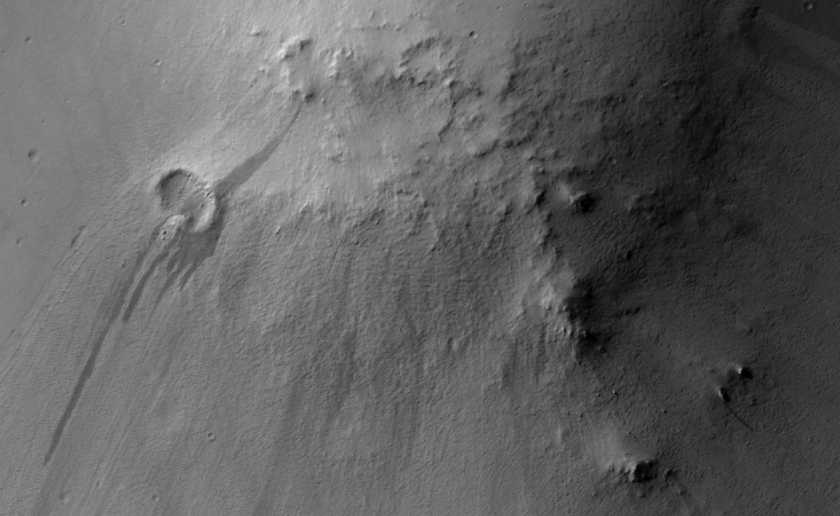 There are other places in this little corner of Mars that, besides their scientific potential, are just beautiful in their own way, such as the rhythmic ripples at the top of this post. There's another spot I like, where dust devils have meandered through the scene, making their own abstract art in the dust. 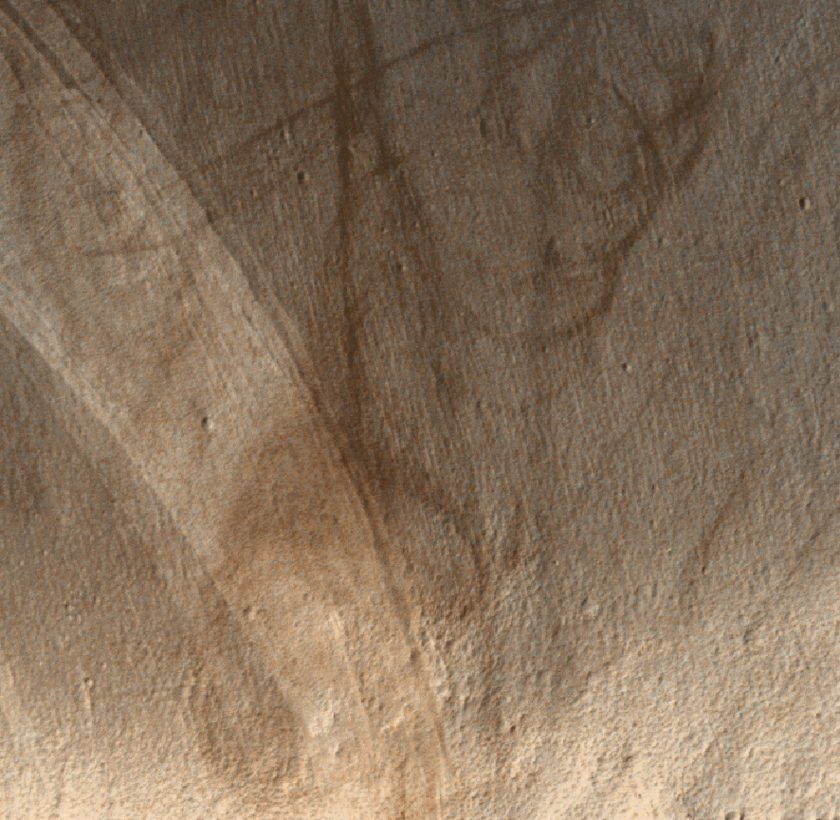 Contrast-enhanced view of the floor of Verde Vallis, Mars as observed by the HiRISE instrument on board the Mars Reconnaissance Orbiter. The area shown is roughly 200 meters across.

I'll always remember with wonder the time I played a very small role in exploring Mars. Now that I've tried it, I'll be submitting many more HiWishes and crossing my fingers, waiting for word from that most distant desert that there is my own postcard waiting for me and for anyone else who cares to look.