Missions to a Star

There are things that we see every day, but that we don't really see at all. There are objects so common that we pay them no attention—even the most spectacular ones. At the bright center of all such things, I'd say, is the Sun. When was the last time you noticed it, or thought about what it is?

Here is our very own living star. A spacecraft orbiting the Earth called the Solar Dynamics Observatory (SDO) captured this image...today. 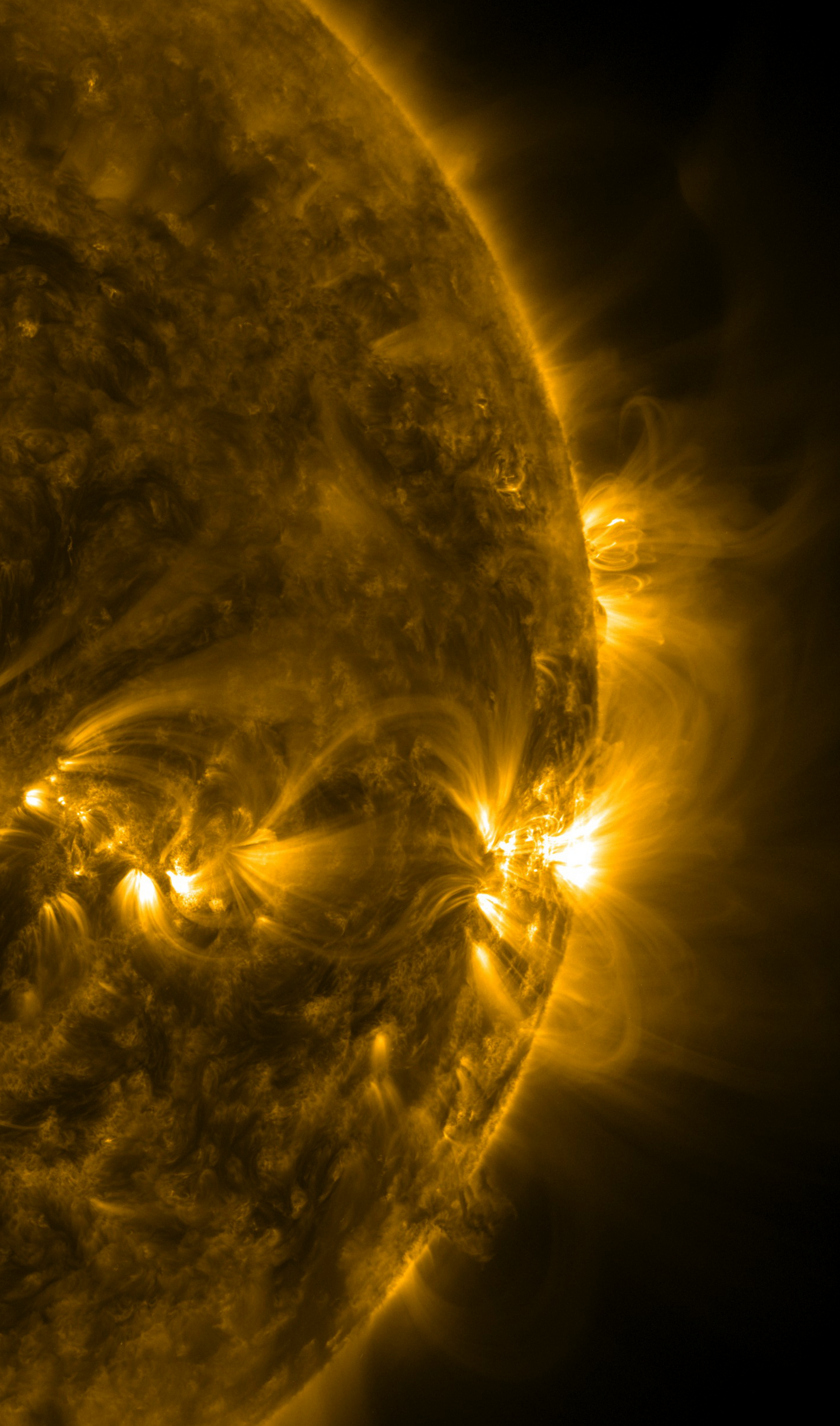 The limb of the Sun as it appeared at a wavelength of 171 angstroms, as seen in February, 2014 by the Solar Dynamics Observatory.

Looking at the Sun in this wavelength of light is a good way to catch coronal loops, arcs of plasma often larger than the entire Earth, that surge along the Sun's powerful magnetic field lines. The temperature here reaches about 1 million degrees Kelvin (1.8 million Fahrenheit).

SDO monitors the Sun continually. We can even see a time-lapse movie of the star's motion over the course of several days, a good reminder that the Sun is much more than a static sphere.

The Sun as it appeared at a wavelength of 171 angstroms over several days in February, 2014. As seen by the Solar Dynamics Observatory.

SDO is just one member of a fleet of spacecraft, past and present, that have observed the Sun. But most of these have done so from around or near the Earth (with important exceptions, such as the Helios mission in the 1970s).

For all our watching, we remain in the dark about many of the Sun's secrets. In the next few years, though, two ambitious new missions will set out for the very heart of the Solar System, and will encounter our star close up.

The European Space Agency's Solar Orbiter spacecraft, in collaboration with NASA, will orbit the sun closer than any other so far, as close as 42 million km, just over a quarter of the distance to Earth. After launch in 2017, Solar Orbiter will swing by Venus and the Earth for gravitational speed boosts before finally reaching operational orbit three-and-a-half years later.

From there, it will chart the innermost regions of the solar system, with clear views of the Sun’s poles.

According to ESA, the spacecraft will be in a great position to observe the links between the sun’s surface, its corona and heliosphere. From the mission site: "Solar Orbiter will be used to examine how the Sun creates and controls the heliosphere, the vast bubble of charged particles blown by the solar wind into the interstellar medium. The spacecraft will combine in situ and remote sensing observations to gain new information about the solar wind, the heliospheric magnetic field, solar energetic particles, transient interplanetary disturbances and the Sun's magnetic field."

The spacecraft carries 21 sensors, many of which operate from behind a carefully-designed heat shield that will protect the ship's workings from temperatures as high as 520°C. A key ingredient in the shield will be ‘Solar Black,' a type of calcium phosphate derived from burnt bone charcoal, the same material often used in prehistoric cave paintings.

NASA's Solar Probe Plus, slated for launch in 2018.

The very next year after Solar Obiter departs, another Sun-bound spacecraft is slated for launch. If it successfully completes the mission design reviews now underway, Solar Probe Plus will be the first to actually fly right into the Sun's atmosphere, the corona. It will pass within 8.5 solar radii of the Sun itself. The goal is to understand how the corona is heated and how the solar wind is accelerated.

Solar Probe Plus will be undertaking quite an odyssey. It will loop around the inner solar system for the better part of a decade, swinging by Venus not once but seven times before finally making a close approach to the Sun in 2024. Once there, the Sun's tremendous gravity will accelerate the spacecraft to an astounding 724,000 kph (450,000 mph). At that speed you could travel from Los Angeles to San Diego in less than a second. In that place the temperatures, and the views, will be truly terrific.

If they succeed, both of these missions should open our eyes to the Sun in a whole new way.

Those will be two wonderful missions! The most stunning solar image I have ever seen to date has been the solar tornado video from the SOHO spacecraft. This UV video above is right behind that.

Amazing! It is a shame it will take too long to happen