There is a new set of hills on Mars. Well, the hills themselves aren't new, but they have a new name. In the past couple of months, the International Astronomical Union has officially designated names for dozens of craters, cliffs, seas, and mountains on four different worlds. They include places like Nakuru Lacuna on Saturn's moon Titan, Neptunalia Dorsa on the asteroid Vesta, and Mercury's Lennon Crater, named for John.

Among the newly named landmarks is Simois Colles, a group of low hills in the Sirenum region of Mars. I don't find their name as evocative as some of the other new monikers (it was borrowed from a Greek river god). At first glance, they don't look like much, either, not much more than a cluster of lumps within a basin. But I pored over some high-resolution images of the area that the Mars Reconnaissance Orbiter sent home. This is Mars, after all, so I wasn't too surprised when I discovered that Simois Colles and the surrounding area are not only interesting, but rich with places calling out for exploration.

Just looking at the broader context hints there could be a lot going on in these hills. In this view of Sirenum Fossae and the surrounding country captured by the Mars Express spacecraft, there are signs of tectonic activity, flows of liquid across the surface, major impacts, and colorful mineralogy. The hills of Simois Colles can be seen here as the rough cluster of lighter-toned outcroppings on the left side of the image about halfway down. 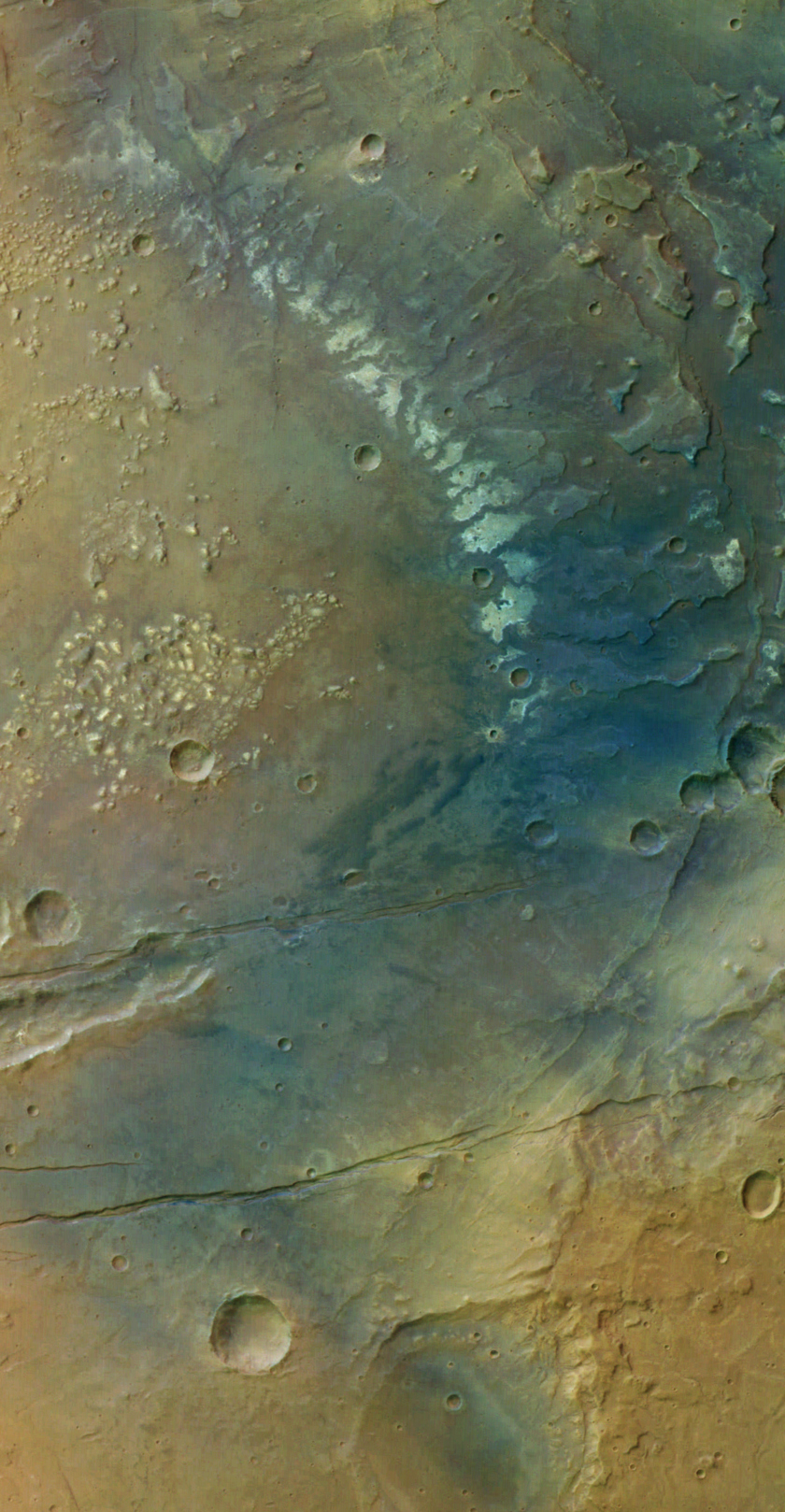 The Sirenum Fossae Region of Mars

Mars Express sent back this view of Sirenum Fossae and the hills of Simois Colles, which are seen on the left side near the middle of the image.

The context camera on board the Mars Reconnaissance Orbiter provides a closer, if less colorful, look. There are craters and drifts of dust between the hills, but nothing of particular interest, at least to the casual observer. 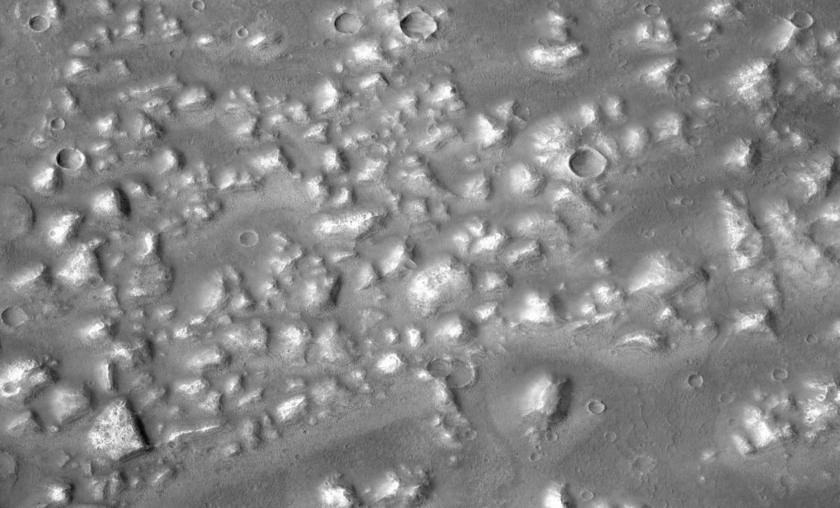 Simois Colles, a group of Martian hills near Sirenum Fossae, as seen by the context camera on board the Mars Reconnaissance Orbiter. The area shown is just under 30 kilometers across.

Now we switch to a view from HiRISE, the high-resolution camera carried by the same spacecraft. In this image, objects just a few meters across are visible. At this scale something intriguing reveals itself. Individual hills display geometric patterns, spider webs of stone. 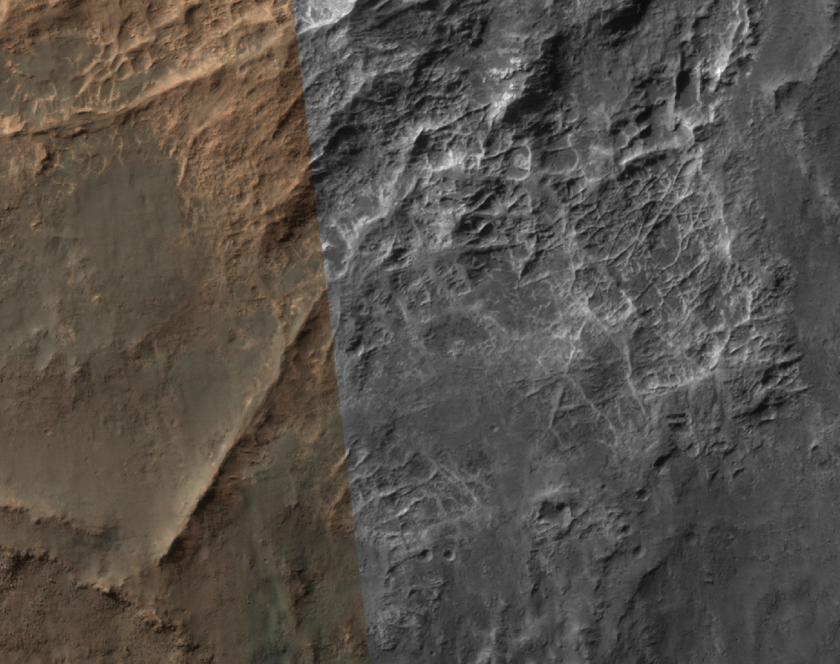 High-resolution views of the hills of Simois Colles reveal geometric patterns of rock. An image from the HiRISE camera on board the Mars Reconnaissance Orbiter.

Have veins of hard minerals, perhaps deposited by water or volcanic processes, resisted erosion even as the surrounding, relatively soft material weathered away? Could some of the raised areas even be inverted relief features, where formerly low channel beds formed by water or lava remain high up after the surrounding rock erodes away? What does this add to the complex story of how water once flowed across Mars?

Traveling further south in the same HiRISE image, just beyond the hills, there is something maybe even more interesting. A steep drop-off, an overhanging cliff, and something hidden in the shadows. 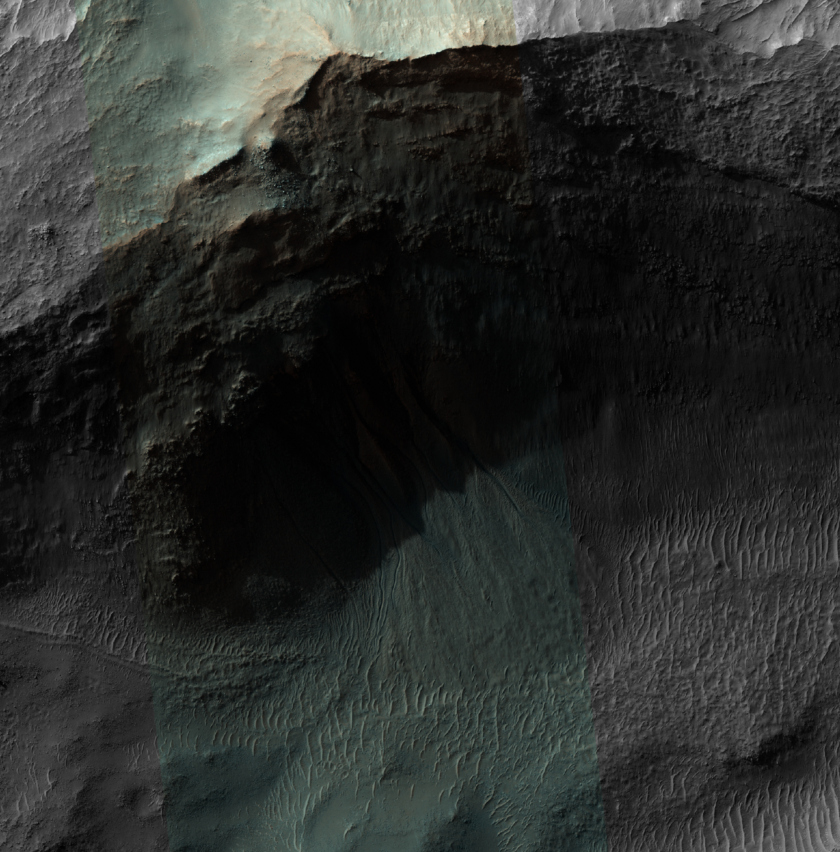 Overhanging cliffs near Simois Colles on Mars partially conceal a set of gullies that appear to originate at specific rock layers. Imaged by the HiRISE camera on board the Mars Reconnaissance Orbiter. The area shown is approximately one kilometer wide.

There seems to be some kind of flow happening right at this particular spot, but not elsewhere along the wall. But what is it? HiRISE snapped that picture at 2:59 PM, local Mars time. In this location, the afternoon shadows were already starting to lengthen, and we just can't see much under the cliff.

Or can we? Why not zoom in even further, and stretch the brightness curve of the image in photo processing software in order to see what we can? 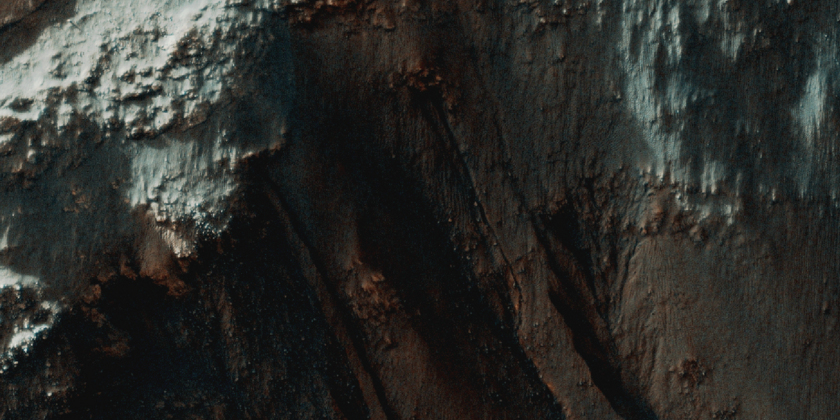 A detail from the image above, processed to illuminate darker areas.

It turns out to be a pretty spectacular example of the kind of gullies that form on Martian canyon and crater walls, originating along particular rock layers. There are several theories about how the gullies form, but one is that they are fed by underground aquifers, groundwater traveling between layers and through porous rock to eventually emerge and flow out onto the surface. Just recently, NASA announced that similar features in other locations are strong candidates for places where water is flowing—not in the distant past, but today.

On Earth, everywhere there's liquid water, there's life. Everywhere. Of course, that doesn't necessarily mean there are any Martians swimming in these underground streams.

But if there are, Simois Colles just might be one place to look for them.

From the science research outpost station Bill Dunford, located in the Simois Colles region of Mars, today reported .... Bill - those are some very interesting points you brought up. Mars is not dull, as you are showing, whereever you look. Thanks for the great inspiring article.