The Giant Spider of Mercury

Mercury will surprise you. At first glance, it's gray and cratered, almost indistinguishable from the desolate far side of Earth's Moon. But one of the Solar System's most reliable rules holds sway at Mercury, too: take a closer look and you'll find things you never expected.

For one thing, the First Planet is not really colorless. Sure, if you flew by and looked out a window that's mostly what you'd see. But if you pass light reflected from Mercury's surface through filters sensitive to different wavelengths, then combine the images, something more reveals itself. 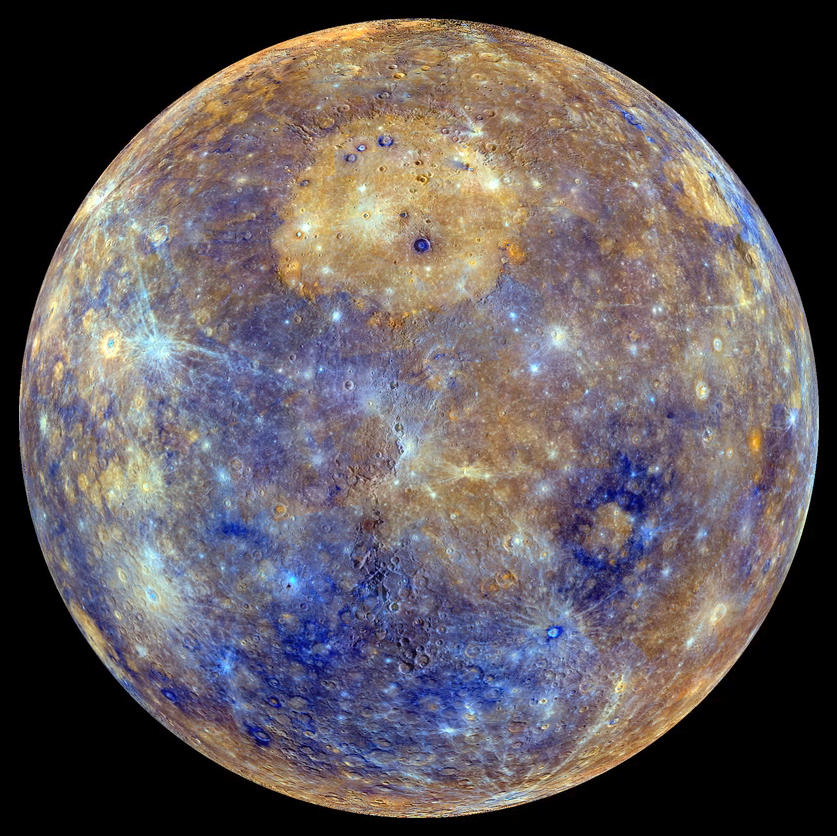 An enhanced-color view of Mercury, assembled from images taken at various wavelengths by the cameras on board the MESSENGER spacecraft. The circular, orange area near the center-top of the disc is Caloris Basin. Apollodorus and Pantheon Fossae can be seen at the center-left of the basin.

It turns out that different kinds of rock on the surface reflect subtly different colors. It takes special camera "eyes" to distinguish these hues, and there is just such a set of such instruments on board the robotic MESSENGER spacecraft now in orbit around Mercury. All deep space missions face dangers of one kind or another, but MESSENGER is an especially intrepid craft. The heat from the nearby Sun is so intense that the orbiter carries a large shield to protect its components. In fact, the heat reflected from Mercury's surface alone, like a hot sidewalk on a summer day, could cause enough problems that MESSENGER follows a highly elliptical orbit. It regularly takes the spacecraft high above the planet so it can cool off and not spend too much time baking near the surface.

From its looping vantage point around Mercury, MESSENGER has mapped almost every square kilometer of the planet's surface during the past couple of years of orbital flight. The spacecraft has seen some pretty striking landscapes along the way. Take Caloris Basin. Named, appropriately enough, for the Latin word for 'heat', this giant impact crater can be seen as the orange, circular area in the color image above. The Mariner 10 probe discovered Caloris in 1974, but at the time the feature was half hidden in the darkness of the Mercurial night side.

MESSENGER first flew by Mercury in 2008 before it settled into its final orbit, and one of the first things it saw was the Caloris Basin in its full glory. Including, right near the center, this strange land.

The striking troughs of Mercury's Pantheon Fossae, the feature that MESSENGER scientists first called "The Spider" when they discovered it.

Mercury explorers saw an enormous set of grooved valleys, probably extensional faults, radiating from a 41-kilometer-wide crater. They called it "The Spider."

Later on, the International Astronomical Union officially dubbed the region Pantheon Fossae. "Fossae" means "trenches", and here those trenches resemble the inside of the dome in a Roman temple. For the same reason, the central crater was given the name Apollodorus, after the Pantheon's architect.

Since then, scientists have continued to debate exactly what caused the faulting that pulled apart the rocks of Caloris Basin into such a distinctive pattern. They have also argued whether Apollodorus crater is, in fact, a coincidence unrelated to the grooves, since it appears to have formed later and not exactly at the center of the bullseye.

A variety of high-resolution scans of the area from MESSENGER could help get to the bottom of it. Here's an arresting view, taken from an angle.

The MESSENGER orbiter provides us with an oblique view of the radial fault lines of Mercury's Pantheon Fossae region.

And here's a look right into Apollodorus. Like many craters on Mercury, it shows signs of "hollows"--bright patches where it's thought that the unrelenting sun has actually blasted away once-solid rock, sublimating it into gas. 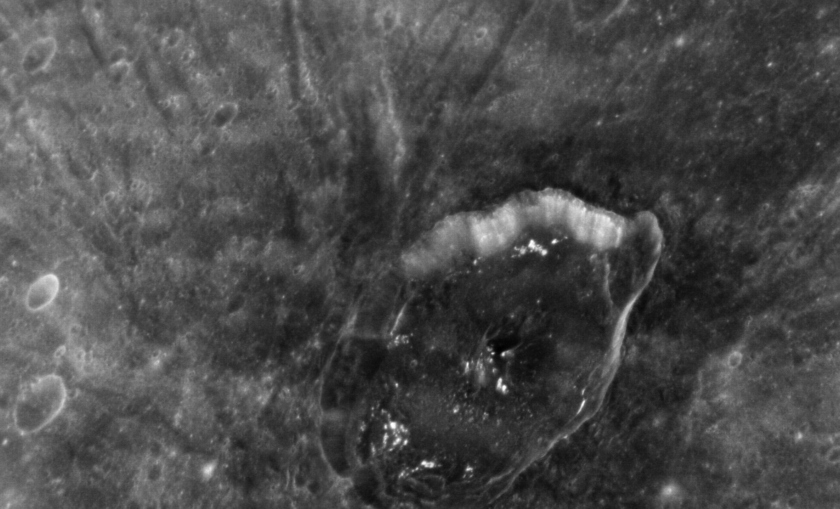 A look into Mercury's Apollodorus Crater from the MESSENGER spacecraft.

"The Spider" is one of the most hauntingly beautiful spaces in all the Solar System's strange wilderness. And to think it's a place we never even knew existed until a few short years ago.

I can't help but wonder what else the ongoing robotic reconnaissance has left to reveal.

Bill, this is a very intriguing and informative article. Thank you for the effort! I was wondering if subsurface density variances and or subsurface material temperature differences could have caused the noticed lopsidedness of the impact?

Thank you kindly, David and Bob. Bob, I'm afraid that when it comes to your question, I'm out of my depth. (See what I did there?) But I'll see what I can find out.