I love maps of the planets. They remind me that the landscapes of Mars and Mercury are real places. You could wade along the shores of Titan yourself, listening to the splash your boots made as you walked (as long as they were really, really good boots). Planetary maps mark the retreating frontiers of knowledge: explorers filling in the blank spaces based on the deep space dispatches of robotic scouts. More than metaphor, though, they're such physically beautiful things. Each one combines the work of dozens of scientists, through technical precision and artistry, into a visual record of discovery. The US Geological Survey even makes frameable paper maps available for order. They offer a tactile, ink-and-paper way to experience the data sent home by distant spacecraft.

Here's a particularly handsome example. It's a map of the geological features of the Martian north polar region. It charts the northern plains and the wind-sculpted cap of water ice and seasonal carbon dioxide frost. It's full of intriguing craters and canyons with evocative names, such as the craters Boola and Jojutla, named after towns in Guinea and Mexico. 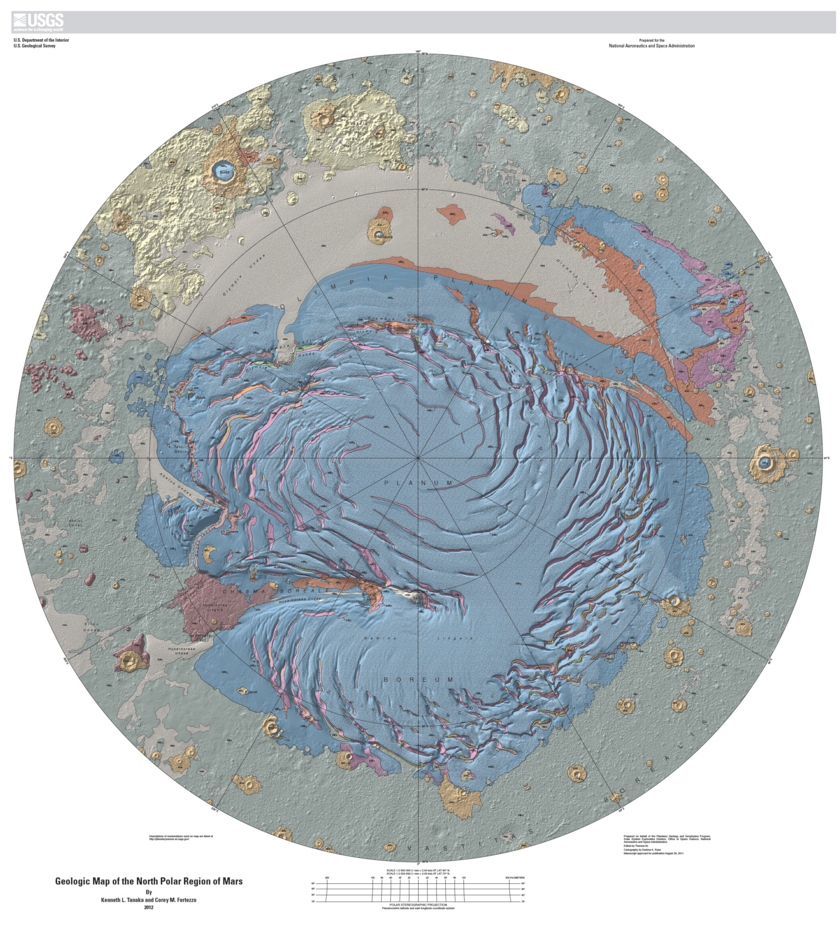 A portion of a map prepared by the US Geological Survey, based on data from several Mars missions, showing the geological features of the Martian north polar region. According to its creators, this map is the first to record the pole's entire observable stratigraphic record using the various post-Viking image and topography datasets. The full map and key can be found on the USGS web site at pubs.usgs.gov/sim/3177/

The colorful regions on the map represent variations in the geological formations in the area. Its creators note, with justifiable pride, that their "geologic map of Planum Boreum is the first to record this feature’s entire observable stratigraphic record using the various post-Viking image and topography datasets released up until 2009. We also provide much more detail in the map over what was presented [in earlier maps], including some substantial revisions based on new data and observations. The available data have increased and improved immensely in quantity, resolution, coverage, positional accuracy, and spectral range, enabling us to resolve previously unrecognized geomorphic features, stratigraphic relations, and compositional information."

The complete map, key, and all the other details can be found on the USGS web site.

As compelling as this map is, after poring over it I still want to "go" there. Luckily for me, a number of spacecraft are circling Mars now, all in polar orbits that provide perfect views of the ice caps. I dug through the data sent back by the Mars Express orbiter, and found this one.

The north polar cap of Mars and the spiraling network of troughs, hundreds of meters deep, known as the Boreales Scopuli. The full cap is roughly 1000km across. Imaged by ESA's Mars Express orbiter.

That semi-circular scarp toward the bottom of the image is intruiging. Wouldn't it be great to take a closer look? Again, luckily for me there's a spacecraft for that. Another look through another digital archive produced this: a view of the feature's curving edge, seen in fine detail by the Mars Reconnaissance Orbiter.

A steep ice scarp hundreds of meters tall at the edge of the north polar cap of Mars. Imaged by the high resolution camera aboard the Mars Reconnaissance Orbiter.

And now we can see why Mars explorers are continually drawn to this region, too: layers and layers of Martian history preserved in the ice like the chapters of a book. You can find out much more about it in the USGS pamphlet that accompanies the North Pole map.

It's an interesting thought experiment to imagine future maps of Mars. What details will they chart? How about "Habitats of Valles Marineris"? Maybe you'll be able to order a paper version.

This is some really nice map work. Thanks for sharing that.

Thanks, Bob. My pleasure.