The disaster in the Philippines is stunning in its scale. In its specifics, heart wrenching.

Typhoon Haiyan's far-reaching destruction, and the suffering it is now extracting, is hard to even grasp. Yet aid workers on the scene and those who support them around the world will grapple with it anyway.

So will the scientists who continue the campaign to understand and devise ways to cope with the Earth's complex and sometimes dangerous power. One part of that campaign takes us into space. The effort is already paying off. How much worse might Haiyan's impact have been without the forewarning made possible by satellites? How crucial will global space-based communication and navigation prove during the coming relief work?

One more question, one that will only grow even more pressing with time: how much can we understand about our only home planet's changing climate and its effect on our lives? Healthy forests, oceans, and skies, the ability to predict and track killer storms—even water and food supplies—are all at stake.

Missions to other parts of the Solar System continue to expand our understanding of nature, both in deep space and at home. But this week seems like an especially good time to touch on some sister missions dedicated specifically to studying Earth and its intricate, intriguing, and sometimes intense weather and climate. Did you know that NASA's Jet Propulsion Laboratory, which famously flies spacecraft such as the Mars Curiosity rover and the Cassini orbiter at Saturn, devotes a full third of its budget to Earth observation missions? Here are some images and information about current and upcoming Earth missions from a variety of agencies. (There's a fairly comprehensive set of resources about the US space program's environmental work at climate.nasa.gov.)

One example are the satellites Terra and Aqua. Both spacecraft circle the globe in polar orbits. Terra passes from north to south across the equator in the morning, while Aqua flies south to north over the equator in the afternoon. Together they can observe the entire planet every day or two. Both carry an instrument called MODIS, short for Moderate Resolution Imaging Spectroradiometer. MODIS sees in 36 spectral bands, and images in those different wavelengths can provide information about what's happening on land, water, and the lower atmosphere on a local and global scale.

Typhoon Haiyan dominates this view of the planet, which simulates the Earth as it appeared in space on November 8, 2013. The image was generated using visible light data from the MODIS instrument on board the Terra and Aqua satellites, mapped onto the globe in NASA's Eyes on the Earth application. The vertical stripes correspond to areas that the two spacecraft did not observe that day.

Here are several different MODIS views from last week of one section of the Pacific: the eye of the monster. 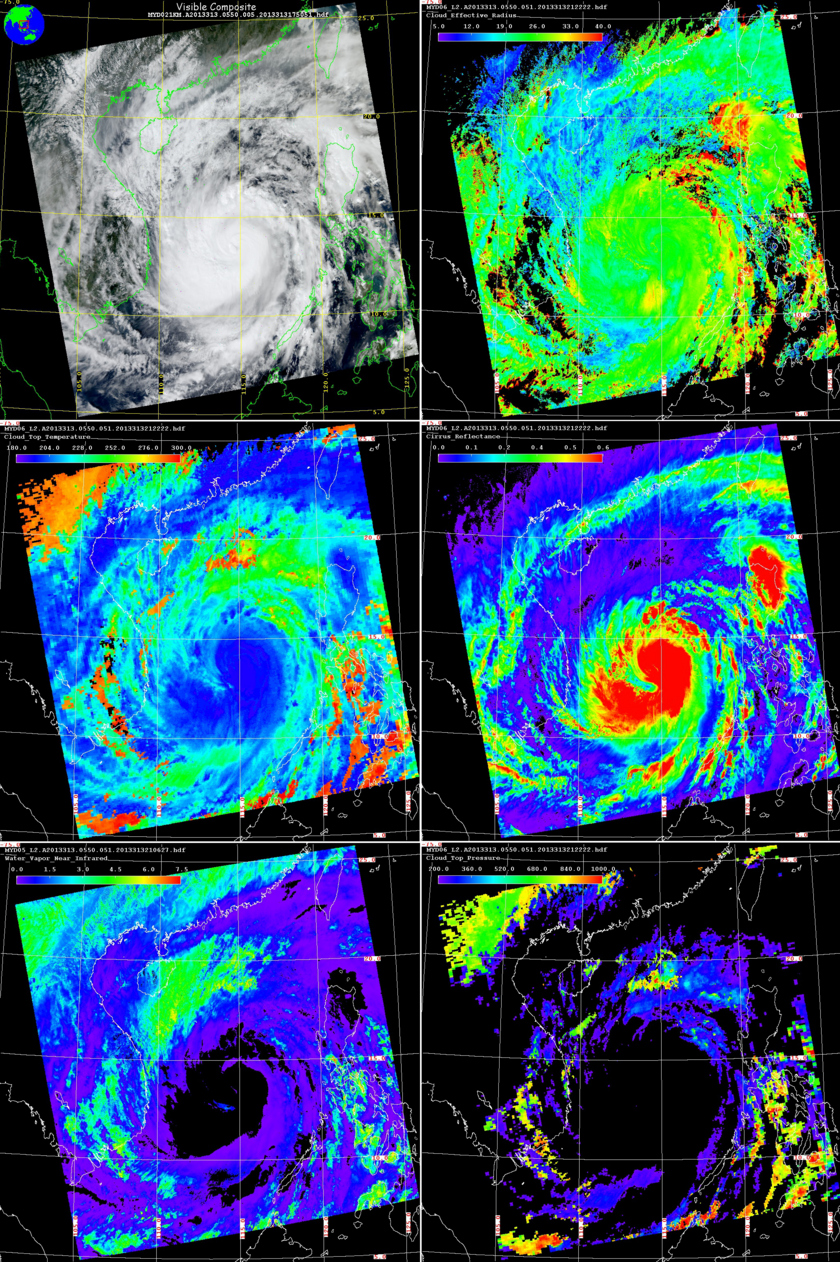 A set of Typhoon Haiyan observations from the Moderate Resolution Imaging Spectroradiometer (MODIS), an instrument that flies on board NASA's Terra and Aqua satellites. The two spacecraft, flying in opposite directions, together view the entire Earth's surface every day or two. These images represent just part of the data that MODIS returns, including temperature, pressure, water vapor, and more. This knowledge will help scientists better understand and predict this kind of monster storm.

There are many Earth-observing satellites operated by several nations. This extraordinary view of Haiyan comes from the Korean spacecraft COMS-1.

The Korean satellite COMS-1 captured this sequence of images as Super Typhoon Haiyan gathered strength in the Pacific.

While budgets are consistently too tight to accomplish everything that should be done in Earth science, NASA scientists, engineers, and administrators have managed to build a growing fleet of spacecraft to observe the planet from on high. In fact, just in the next two years we will see several important launches. Here are the agency's descriptions of the new missions:

SMAP (Soil Moisture Active Passive) will provide global measurements of soil moisture and its freeze/thaw state. These measurements will be used to enhance understanding of processes that link the water, energy, and carbon cycles, and to extend the capabilities of weather and climate prediction models. Future water resources are a critical societal impact of climate change, and scientific understanding of how such change may affect water supply and food production is crucial for policy makers. Current climate models uncertainties result in disagreement on whether there will be more or less water regionally compared to today. SMAP data will enable climate models to be brought into agreement on future trends in water resource availability. You can watch the spacecraft being built.

Jason-3 is the fourth mission in U.S.-European series of satellite missions that measure the height of the ocean surface. Scheduled to launch in 2015, the mission will extend the time series of ocean surface topography measurements (the hills and valleys of the ocean surface) begun by the TOPEX/Poseidon satellite mission in 1992 and continuing through the currently operating Jason-1 (launched in 2001) and OSTM/Jason-2 (launched in 2008) missions. These measurements provide scientists with critical information about circulation patterns in the ocean and about both global and regional changes in sea level and the climate implications of a warming world.

Orbiting Carbon Observatory (OCO)-2 will be NASA’s first dedicated Earth remote sensing satellite to study atmospheric carbon dioxide from Space. OCO-2 will be collecting space-based global measurements of atmospheric CO2 with the precision, resolution, and coverage needed to characterize sources and sinks on regional scales. OCO-2 will also be able to quantify CO2 variability over the seasonal cycles year after year.

ISS-RapidScat is a speedy and cost-effective replacement for NASA's QuikScat Earth satellite, which monitored ocean winds to provide essential measurements used in weather predictions, including hurricane monitoring. NASA's Jet Propulsion Laboratory and the agency's space station program came up with a solution that uses the framework of the International Space Station and reuses hardware originally built to test parts of QuikScat to create an instrument for a fraction of the cost and time it would take to build and launch a new satellite. The resulting ISS-RapidScat instrument is slated to launch in 2014 and will fly aboard the International Space Station to measure Earth's ocean surface wind speed and direction.

Once in orbit, these spacecraft will add to the global view we're building, which you can see yourself at NASA's amazing Eyes on the Earth site. There you can track the planet's pulse across time with 3D displays of almost real-time data from Earth-observing missions. To hear about some of these missions directly from the teams who are running them, check out this video of an Earth science-focused event that took place last week on the JPL campus.

We can't prevent killer storms or drought. But we can figure out more about how, when and where they will occur. Doing so will make all the difference.

Meanwhile, there are several ways you can donate to relief efforts in the Philippines.

After the storm hit, JPL posted an image generated by its Advanced Rapid Imaging and Analysis (ARIA) team. It maps where the storm's destruction was heaviest, via a process that uses X-band interferometric synthetic aperture radar data from the Italian Space Agency's COSMO-SkyMed satellite constellation, along with a prototype algorithm to rapidly detect surface changes. According to JPL, ARIA is building an automated system for providing rapid and reliable GPS and satellite data to support the hazard monitoring and response communities. Using space-based imagery of disasters, ARIA data products can provide rapid assessments of the geographic region impacted by a disaster, as well as detailed imaging of the locations where damage occurred. 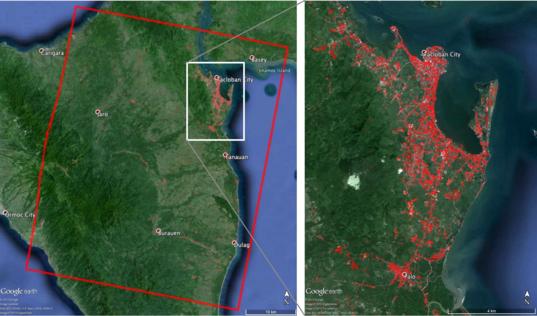 A map of where the storm's destruction was heaviest, created via a process that uses radar data from the Italian Space Agency's COSMO-SkyMed satellite constellation, along with a prototype algorithm to rapidly detect surface changes.