The Strangest Place on the Moon?

It's always rewarding to wander the surface of the Moon using the archive of images captured by the Lunar Reconnaissance Orbiter. It's full of pictures that show off the Moon's stark beauty, pictures so sharp you can see right down to individual boulders on the surface. Exploring the craters, ridges, and rilles seen in the archive usually elicits a "Nice" or sometimes even a "Wow!"

It's more unusual to find a "What the hell is that?"

But that's what I said when I stumbled across this recent view of Lacus Felicitatis (the "Lake of Happiness"). There's a D-shaped depression about two kilometers wide and 30 meters deep. It's filled with domes of smooth, dark material rising above rough, mostly crater-less light material. Its features look unusually sharp (and therefore probably relatively young). 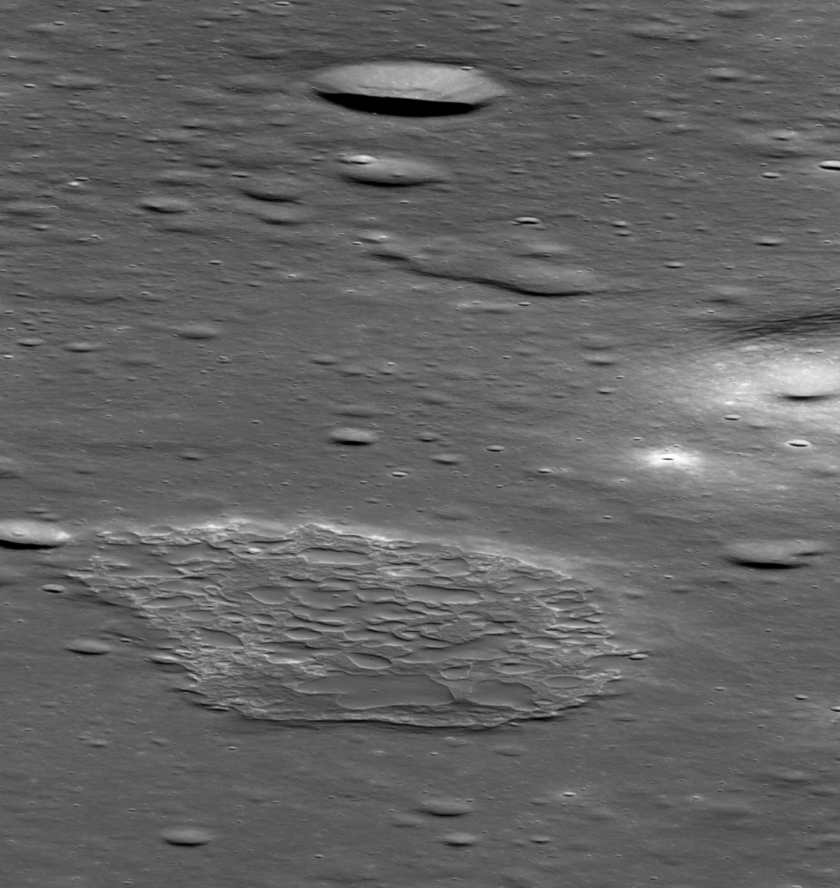 The Lunar Reconnaissance Orbiter captured this new perspective on an unusual feature: the D-shaped "Ina" with its domes and fresh terrain. Ina is about 2 kilometers wide. North is to the right.

I discovered I wasn't the first one to notice this place. Apollo astronauts took note and photographed it from orbit. The feature came to be known as Ina.

Then in the 1990s pictures from the Clementine spacecraft showed that Ina's colors resembled those of very young impact craters, although Ina is definitely not that kind of crater.

More recently, scientists looked at the best available pictures of Ina, and noted a relative lack of impact craters in the low-lying, light materials. They decided it must be very young. They concluded that Ina is a volcanic feature, the caldera of a low shield volcano, and speculated that perhaps it's a site where—even today—gasses from deep underground might be escaping. Such outgassing events could even be the source of the mysterious flashes of light that amateur astronomers report seeing on the lunar surface from time to time.

Then the Lunar Reconnaissance Orbiter sent down even sharper pictures, up to ten times sharper, like this one. As happens so often in science, the new information raised more questions than it answered. 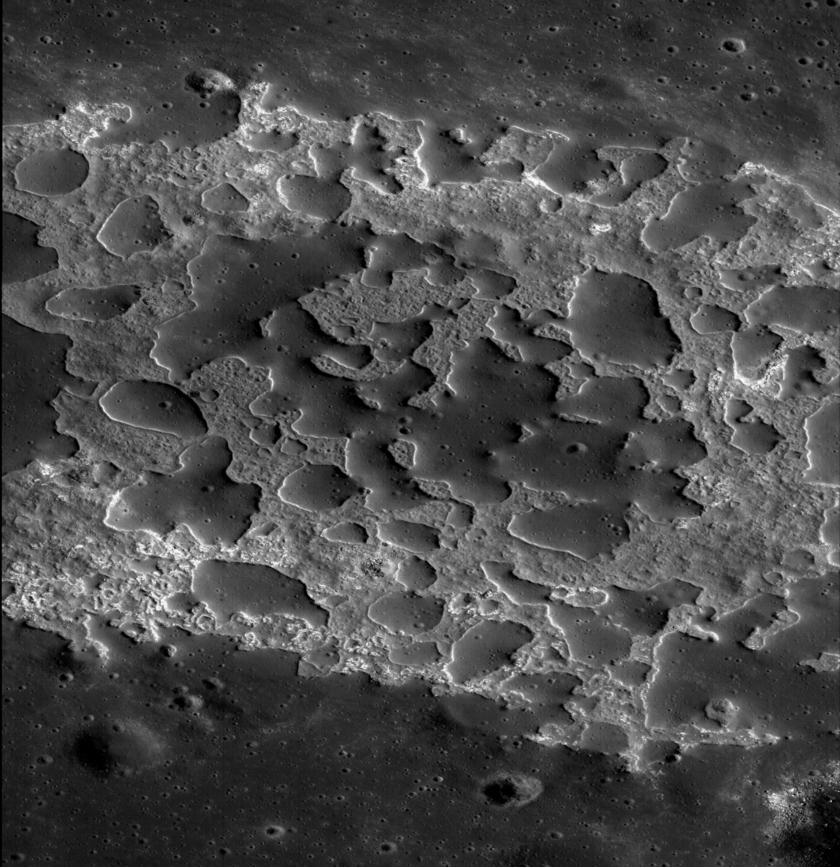 A close view of the unusual Ina formation from the powerful Lunar Reconnaissance Orbiter Camera. It can be hard to see which parts of the terrain rise and which fall. It may help to point out that the darker areas in this image are generally higher than the light areas, the lower part of the picture is closer to the camera than the top part, and the light is coming from the lower left.

Lunar explorers saw that while the lighter material is indeed probably younger that the blobs of darker material, it's not without craters of its own, and may not be all that much younger than the surrounding plains. Rather than places where the ground collapsed, as in an earthly caldera, the lighter areas may be thick lava that flowed between the dark mounds.

We know the Moon better than any other place outside Earth. The strange topography of Ina, however, serves as a reminder that the Moon still guards some of its most interesting secrets.

This reminds me of the time I painted the walls in my flat. I had previously put some plaster on the wall, and in the areas were there was plaster the wall was dusty, and the paint just wouldn't want to stick to the wall - the dust had repelled the paint. So to me it looks like the lava flowed over some dusty area that repelled the lava somewhat (hence it looks a bit like frozen drops of water or frozen drops of wax to me). Could it be that the light areas are actually *older*, but that the loose material hides craters pretty well?

I'm not a geologist or even a geology student but could this zone be an area of 2 upwellings of differentiating magma that happened to breach the surface and freeze as is? The "craters", which lack ejecta blankets may just be gas vents instead. Upwelling two pushes through upwelling one making the seen pattern. As for a flow, may be so however I don't see any flow characteristics because everything is so compartmentalized.

Great article Bill. Would be neat to spot this with my 10 inch Dob telescope but may be too small? Even with a top eye piece etc?

I enjoyed your speculation, Tony and Bob. Hopefully future exploration will settle the question. Bill, I'm not an amateur astronomer, but from what I've read it's possible, but very challenging.