Which is the hardest-working robot in the Solar System? I think you could make a strong case for the 2001 Mars Odyssey orbiter. Named in honor of visionary science fiction author Arthur C. Clarke, this month marks 12 years since Odyssey arrived at its worksite. That makes it the longest-serving member of the robotic workforce there. For that entire decade-plus, the trusty spacecraft has been dutifully sending home data, while also serving as a vital radio relay link for surface operations at Mars.

Last week, Odyssey's handlers at Arizona State University released yet another new batch of data. Diving into it yielded a few pieces of Mars-made art to add to our growing collection.

First off is a scene from the planet's southern highlands, where a parade of dust devils has painted an abstract image evoking a network of veins or a tangle of branches.

Dust devils painted this artwork by clearing dust away from a landscape in the southern highlands of Mars. The image, captured by the Mars Odyssey orbiter, displays an area a few kilometers across. The contrast has been stretched to draw out the details.

In the far south, Odyssey found this ominous pit, really just a crater where eons of whisper-thin Martian wind has gathered a dollop of grains and dust.

Actually, this is not the lair of the Star Wars monster, but a crater in the frigid south polar region of Mars that has accumulated a small dune field at its center. Observed by the Mars Odyssey orbiter.

Old dog Odyssey still has a few good tricks. One of them is its ability to observe the surface of Mars at night. The Thermal Emission Imaging System (THEMIS) can see in visible light, but it can also detect surface minerals radiating heat back into space that they have absorbed during the day. This gives Mars explorers important clues to the composition and texture of the surface--plus it just makes some cool images. 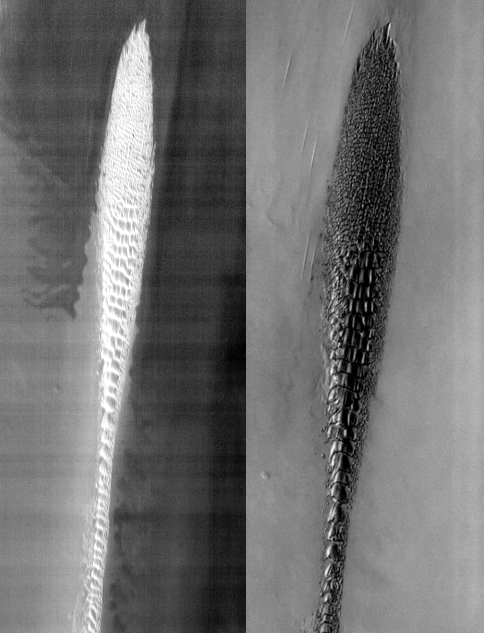 Two views of a dune field in the north polar region of Mars, as captured by the Mars Odyssey orbiter. On the left, a nighttime infrared image taken at about 9 pm local time using the heat radiating from the dunes. On the right, the same scene in visible daylight. Each image shows an area roughly 10 kilometers wide.

Twelve years, millions of miles traveled, more than 50,000 orbits, a long list of scientific discoveries--"odyssey" is an understatement. In another dozen years, will it still be transmitting new art across space? That seems like a lot to ask, even of this workhorse. But who knows?

Update October 9: I was taking literary license when I talked about Mars Odyssey surviving another 12 years, but how long might it really last? Assuming nothing else goes wrong, the critical factor is how much propellent remains on board. Without it, the spacecraft can't orient itself to communicate with Earth or keep its solar panels pointed toward the sun. Helpful unmannedspaceflight.com member Doug Muir sent me this note he received from the Mars outreach team at JPL last year:

"As of today (in September, 2012), Odyssey has 17.3 kg, +3.0 / -5.0 of propellant. 1.9 kg is obligated for a follow-on Orbit Trim Maneuver (OTM) in January 2014. Odyssey utilizes approximately 1 kg / year and historically has budgeted 1 kg / year for unexpected safing events. So, propellant life should be between 5.2 to 9.2 years. These numbers are based on no onboard anomalies that would require propellant above the safing budget, no changes in Odyssey's basic operations (three operating reaction wheels, high gain antenna and solar array servos continue to function normally, etc.) and no further programmatic maneuvers."

Thank you, Bill, for sharing these magnificent images! However: "...a parade of dust devils has painted an abstract image.." I have seen parades *almost* that disorderly, but.....! Dean