The Ice Pits of Mars

The polar ice caps of Mars are instantly recognizable. But take a close look at them, and the familiar gives way to some pretty strange landscapes.

Consider, for example, the "Swiss cheese" terrain that marks the icy reaches of the southern cap. These are places where carbon dioxide ice sublimates (turns from a solid directly to a gas) leaving behind pits a few meters deep. The pits form weird figures and patterns that change shape over time.

As if that weren't enough, in one of these regions something left a four-kilometer-wide scar in the shape of a nearly perfectly circular pit. Exactly what happened? It's hard to say for sure. According to the team poring over high-resolution images obtained by the Mars Reconnaissance Orbiter, the pit could be an impact crater, but where is the material that was blasted out of it? It could be a collapse pit, but where are the fractures typically seen around such features? It doesn't help that the whole thing is covered in dry ice Swiss cheese several meters thick.

This circular depression on the south polar ice cap is about four kilometers across. It first caught the eye of Mars explorers in the 70s, and they still debate whether it's an impact crater or a collapse feature. The 'Swiss cheese' terrain consists of shallow pits where carbon dioxide ice has sublimated away. This landscape was imaged by the high-resolution camera aboard the Mars Reconnaissance Orbiter on four separate occasions pictured here. From left to right: March 2013, May 2013, September 2007, and December 2012. Click to see at full size.

Here's another look, zooming in directly on the center of the pit. More detail emerges, but is it enough to settle the question? 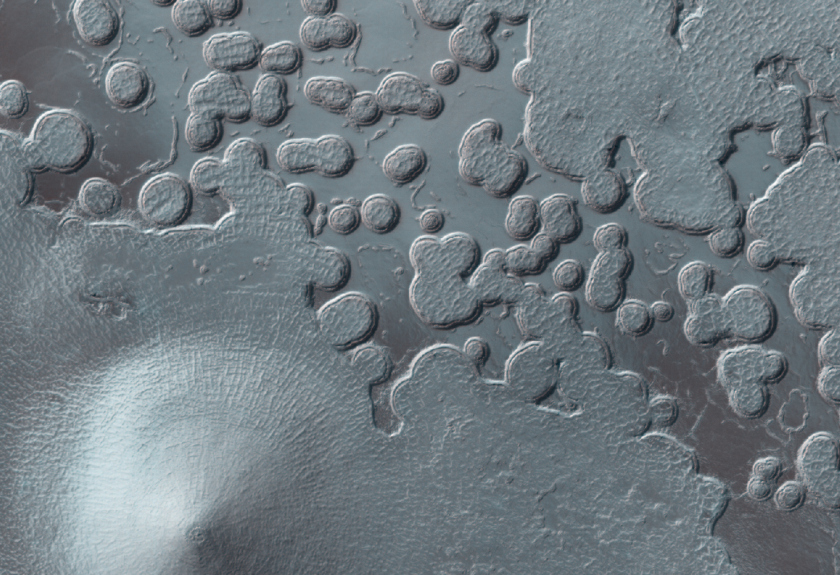 A high-resolution look at the center of a circular depression on the south polar ice cap of Mars. Captured by the Mars Reconnaissance Orbiter.

It's just another example of how much exploration is left for those who will come after us: maybe robots, maybe human travelers. We can only make educated guesses about exactly what they'll find in the ice pits of Mars.

I know I'm going to feel dumb for asking this question... but here goes. I can see a lot of "circular" things in the photos. I'm looking at the closeup photo - but I can't see this "circular depression". I think I need a big red arrow saying "look here".

Maybe Liam is suffering from the same problem I have. I know where the "pit", or circular depression is, but my mind projects it as a peak. I've tried rotating the image, closing one eye, and blinking real fast but I still see a peak. Even the so-called other pits everywhere look like plateaus. BUT THEN I copied and pasted the image into a photo processing program, negatized the image, and viola! Looks amazing. So MRO doesn't have radar capable of penetrating ice? Bummer.

Oh, wait. Duh. This is the rocky surface AFTER the ice has sublimated, isn't it (I still had the peak in my mind).

Let me see if I can clear that up, Liam. The 'circular depression' is the big, round feature that appears toward the bottom of the four images in the first picture. It's about 4 kilometers across. The second picture is a closeup that zooms in on the center of that big round feature. Andrew, yes, it can sometimes be hard to distinguish which parts are elevated.

Well... there is one part of the images that looks like it could be a peak. The problem for me is the description of the "zoomed in" image. The description says "zooming in directly on the center of the pit.". However what I thought was the center of this pit is to the lower left of that zoomed in image... not actually at the center.

There is a similar optic with another depression called the chimney since it looks like a smoke stack but it really is a depression and not an elevated surface feature. As for the other carved surface features those are appearing to be caused by out gassing (venting) of gas trapped below the ice. When sublimation weakens the ice enough the gas pressure breaks the ice and the venting action carries subice material (planetary surface material) with it and disperses it across the surface in various classifications of patterns. [I have marked images of these patterns and I have also marked vents showing signs of out gassing (venting) and such vents in vent fields. These appear to be unique to the south pole region only, at this time] The MRO Meteorological Team studying this is starting to see this pattern at the south polar region. The north polar region and south polar region out gassings appear to have different scale deposition patterns and sizes. The teams PI, Candice Hansen, has her team explaining this on their June 7, 2013 live blog conference. It is posted on www.planetfour.org in the blog section. You do not need to register to play this back. It is about 45 minutes long and I recommend you go see this video. It will help you understand what Bill has posted in this blog.

Scientific publications usually state the direction of illumination in the captions to photographs of terrain. It wouldn't be a bad practice for the Planetary Society to adopt.

Iapetus says its a strike --side walls are way to smooth and that center colum way to unsmooth bumpy lumpy based to be anything other than a impact.PS you need to do more blogs about Iapetus