Many More Colors than Red: Exploring Mars with Spectroscopy

The American astronomer Carl Lampland once received an award from the British Royal Photographic Society for taking pictures of the canals of Mars. Which don't exist. But Lampland and his colleagues were simply working with the knowledge and the tools they had at the time. He would be surprised, but I think delighted, to learn that even though there are no canals on Mars, there is a 79-kilometer-wide crater in the southern highlands that now bears his name. And I think he'd also be happy to know that Lampland Crater has been explored with one of the most amazing and powerful tools that modern Mars researchers have: the Compact Reconnaissance Imaging Spectrometer for Mars (CRISM).

CRISM is one of several instruments on board the Mars Reconnaissance Orbiter, which means it enjoys one of the best views of the Red Planet ever provided as it rides with the robotic spacecraft just 255 kilometers or so above the surface. CRISM helps scientists build highly detailed maps of minerals using a technique called reflectance spectroscopy. Mars is so much more than just red. In fact, like on Earth every mineral on Mars reflects different parts of the light that comes from the sun. CRISM is extraordinarily sensitive to these color differences, including colors the human eye can't see.  Every pixel in a CRISM observation includes up to 544 different data points across the electromagnetic spectrum. By assigning colors to those data points that correspond to various mineral signatures, experts can construct pictures of the mineralogy of an entire landscape.

The resulting information is extremely valuable for everything from understanding where water once flowed on the surface to picking a promising landing site for the next rover.

CRISM also happens to make some really pretty pictures. Here's a combined look at some of the CRISM observations of Lampland Crater. There's an overview animation, then some still images free of the artifacts caused by the image compression process.

An animation showing several views of Lampland Crater on Mars. First, a wide context view, then a close-up on the north rim, both provided by the Mars Express orbiter. Next, two observations by the CRISM instrument on board the Mars Reconnaissance Orbiter: one in enhanced visible color and another showing wavelengths sensitive to mafic mineralogy. In that last view, red indicates the presence of olivine or iron phyllosilicates, green is low-calcium pyroxene, and blue is high-calcium pyroxene. 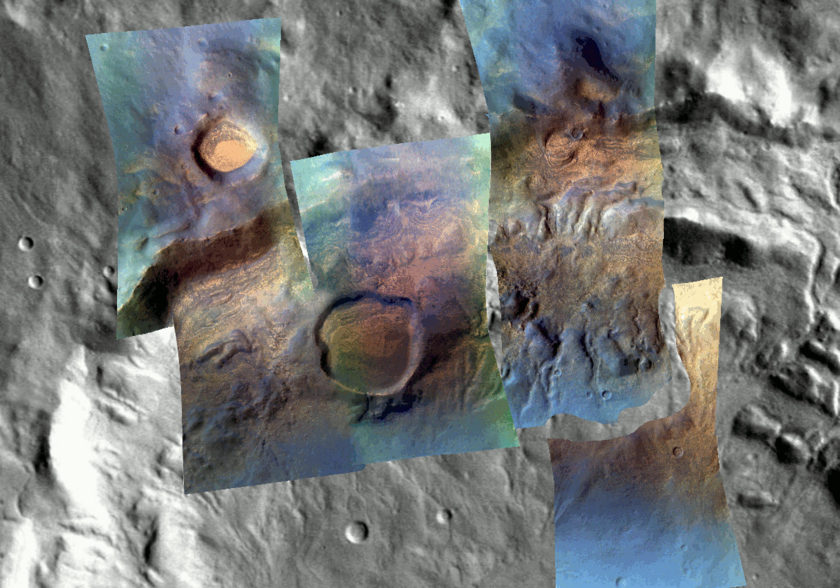 The north rim of Lampland Crater on Mars as seen by the CRISM instrument on board the Mars Reconnaissance Orbiter in enhanced visible color. 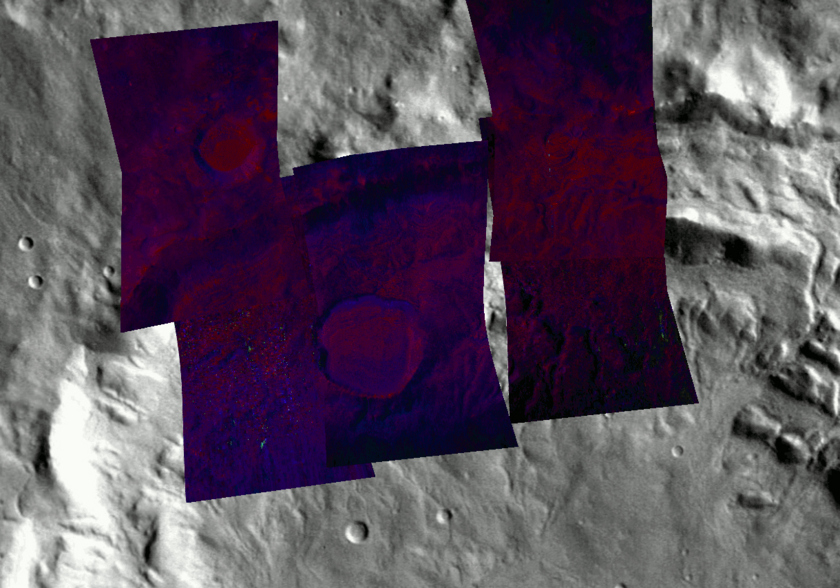 The north rim of Lampland Crater on Mars as seen by the CRISM instrument on board the Mars Reconnaissance Orbiter in infrared light that contains information related to the mineralogy of iron-containing minerals.

There are many more observations of this spot in other wavelengths. Each of them peels back one more layer of Mars' mystery.

This is some interesting science. Thank you for pointing it out Bill. Do you have more locations of this type of data such as at Gale crater or some favorite other site of yours?

You're welcome! Here's the place to look: http://crism-map.jhuapl.edu/

Thanks Bill! I'll check it out.

Hi Bill and Bob: Here's a specific link from the CRISM Science Team to some Gale Crater mosaics (toward the bottom of the list, ALT) http://crism.jhuapl.edu/msl_landing_sites/index_news.php Thanks for writing about CRISM! -Geoff Brown, CRISM public affairs, JHUAPL

I could only open the png and expand it. (my computer). There isn't much percentage of Fe/Mg (red) by proportion of the other elements in the image. Good data also just as in what Bill reported on.