The first human beings to see the "dark" side of the moon were not astronauts. As everyone from grade school children to Pink Floyd can tell you, there is no dark side of the moon, really--just the far side that is forever turned away from the Earth. During all history, while the familiar man-in-the-moon side was observed and charted and depicted in art and song, the far side remained a total mystery.

That changed in October of 1959, when the Soviet Union dispatched a small probe called Luna 3. The spacecraft was in some ways simple by today's standards, but it carried a remarkably ambitious set of machinery. Cameras that were pointed toward the moon exposed rolls of film, which were automatically developed right on board the spacecraft, then scanned so the electronic information could be beamed back to Earth by radio. The team working on that mission included the first people to see the grainy images that revealed the far side for the first time. 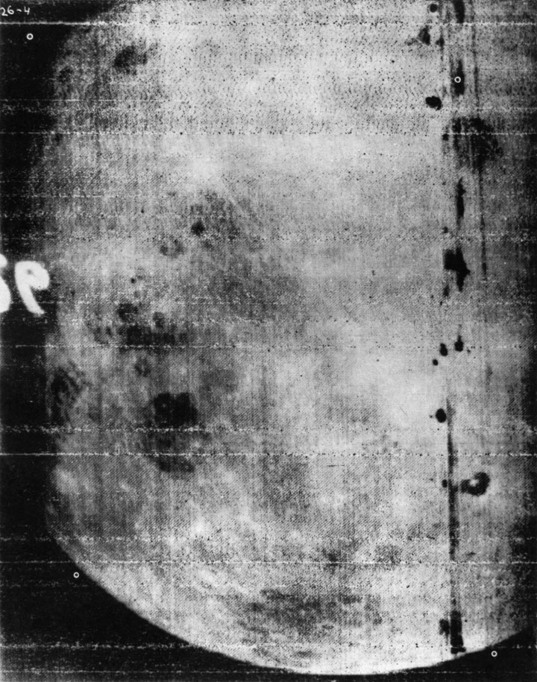 In 1959 the Soviet probe Luna 3 captured this image--the first view ever showing the far side of the moon. Tsiolkovsky Crater is visible as the dark, heart-shaped feature near the lower-right edge.

People have been sending robotic spacecraft back to the moon more or less ever since. Not surprisingly, with advancing technology the view has cleared up a bit. One of the most striking features to be added to the charts of the lunar far side is Tsiolkovsky Crater. This 185km-wide impact crater stands out because it enfolds a central peak rising over a slate-dark sea of solidified lava. The Japanese orbiter Kaguya captured some nice views with its HDTV camera as it glided silently over the scene.

Kaguya was able to show the crater in detail, including sites that were once considered for human landings during the late Apollo era.

A detailed, oblique view of Tsiolkovsky Crater on the far side of the moon, as seen by the HDTV camera on board the Kaguya lunar orbiter.

Today,  there's an even more powerful orbiting platform flying day and night over the moon. The high-resolution cameras on board the Lunar Reconnaissance Orbiter are so sharp-eyed they can make out features smaller than a meter across. 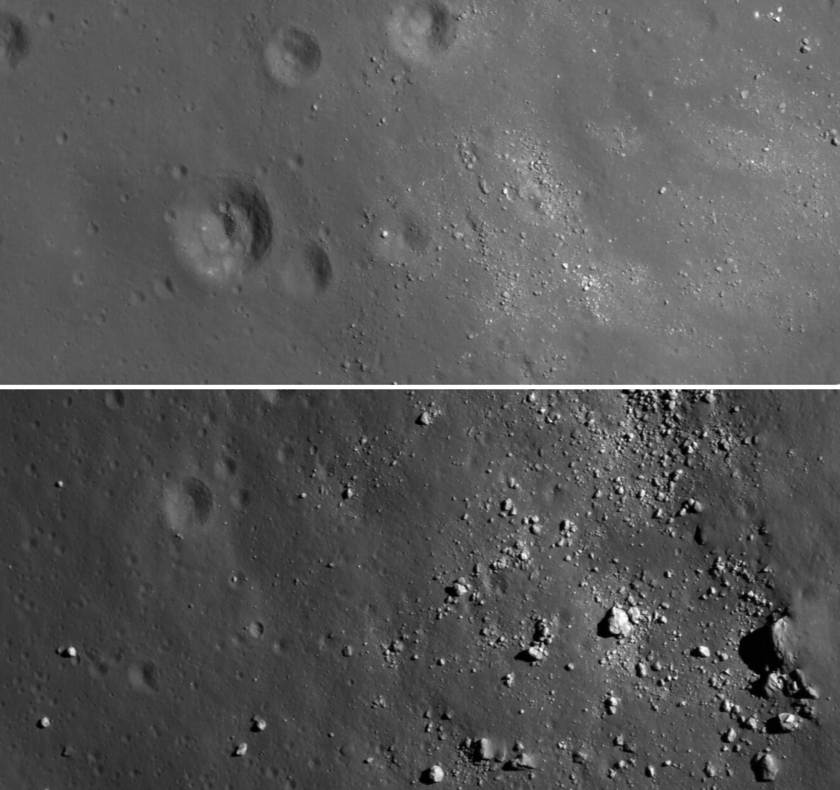 Extreme close-ups on the slopes of Tsiolkovsky Crater's central peak, as seen by the Lunar Reconnaissance Orbiter. We're seeing these scenes at nearly the full 0.5 meters (1.6 ft) per pixel resolution of the orbiter's powerful camera, allowing us to see right down to individual rocks. At the top, craters within craters within craters. Below, a field of boulders crying out for a geologist's hammer.

In a few short generations, we've gone from a complete blank spot on the map, to wide surveys, to close-ups so narrow that we can see individual rocks.

Someday astronauts will probably make their way across this stark, exotic landscape on foot. When they do, they will surely rely in part on the maps we're making today with our intrepid space robots.

Thanks to Don Mitchell for this excellent collection of Soviet lunar probe history.

"Dark" in the "dark side of the Moon" does not refer to the illumination. From a dictionary: 10. destitute of knowledge or culture... 12. hidden; secret;... Obscure is listed as a synonym. So yes there was a dark side of the Moon though it is dark no longer.

It would really be interesting to find out why the back-side is so different from the front side facing earth. My own 'little ' theory is that the back side was once the leading side of the moon, the side facing orbital direction very early on---and when the moon was much closer to the earth. I believe that the moon was possibly heading into heavy 'traffic' on it's orbital swings at a much faster pace--maybe taking only days to complete one orbit instead of it's 29 days now. Later on--maybe another few 100 million years or more. other massive hits on the moon occurred--swinging it slowly to it's present position.

MM - Hi. Here's an FYI in case you had not heard or simply left out, The core is slightly offset adding to the near/far side differences. Lava fields, uplifts and cratering all uniquely contributed to the surface formation as we see it today. The most current impact I can recall came during the APOLLO 14 mission (a few days, I think) after Al and Ed lifted off.