When I was a teenager I got a letter from Carl Sagan. (Ok, it was a form letter, but I was still impressed.) He was starting a new space advocacy project called The Planetary Society, he said, and did I want to become a charter member? I did. Voyager was stunning the world with its tour of the outer planets back then, but there was no Internet, and detailed news about planetary exploration was slow and scant if you weren't a scientist. I devoured information from Planetary Society publications, and was grateful for it.

I would have been blown away by what we have now: dozens of robotic missions pushing back frontiers from Mercury to Pluto—and the ability to ride along in real time. I've been doing just that for the past several years, and logging the most interesting things I see at a site called Riding with Robots on the High Frontier. But you know what? Despite, no because of the space information torrent we have now, The Planetary Society is more relevant than ever, with Emily Lakdawalla's accessible-yet-authoritative dispatches and the Society's ceaseless campaigns in support of space science in general and specific, bold projects.

That's why I couldn't be more excited to join the ranks of guest bloggers on this site, many of whom are heroes of mine, and to get to share a few notes from the trail while riding along with the space robots.

The first stop is Mars, synonymous with mystery and alienness. And yet...there is often something about it that reminds of home. One thing Mars shares with Earth is weather: not just wind and dust storms, but clouds that come and go with the seasons.

Astronomers have glimpsed changes stirring in the Martian atmosphere for generations, and wondered exactly what was happening.   Now we can do better, a lot better. In fact, a daily global weather report comes down from Mars routinely, thanks to a camera on board the Mars Reconnaissance Orbiter (MRO). 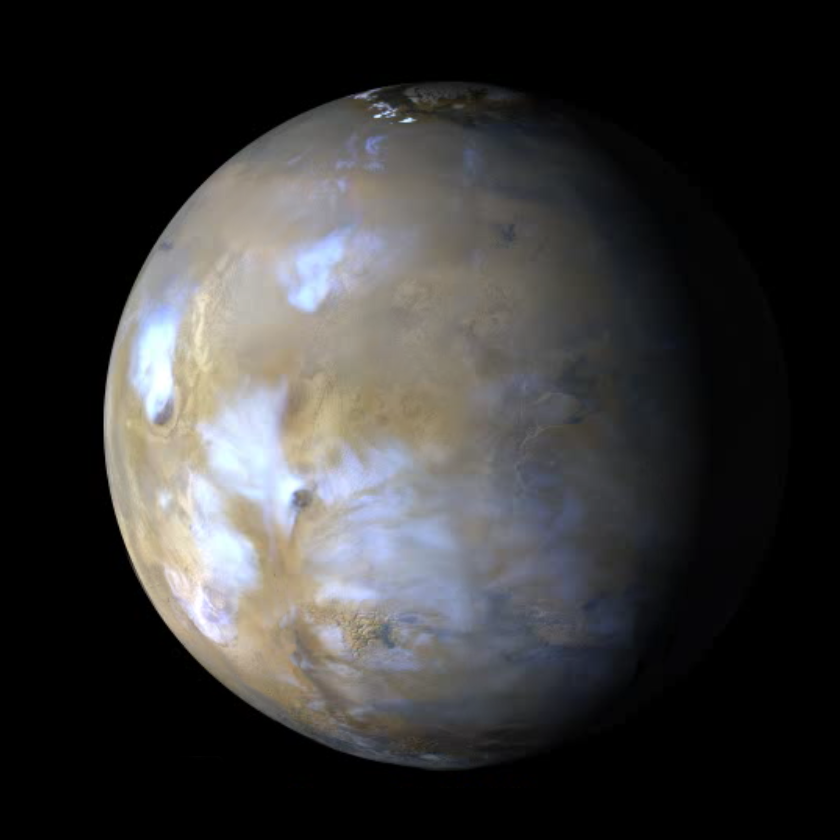 A Cloudy Day on Mars

The above scene from a particularly cloudy Martian day in June of last year was assembled by a team at Malin Space Science Systems, the company that built the Mars Color Imager (MARCI) camera that captures the daily global view from on board MRO. MARCI sends hundreds of images of the surface, which are then assembled into a mosaic and map projected onto a globe.

This image, like most of the global views, originally included a few small blank areas where data was lost or the spacecraft was performing a navigation maneuver. I've patched those areas in using data from days just before and after the main images were captured.

You can see a weekly animation of the latest Martian weather conditions on the Malin site.

This is much appreciated, but why are the Malin videos exclusively Quicktime? That's a format I associate more with the 1990s than today, and I haven't installed Quicktime for many years. How about a YouTube channel instead?

You'll have to ask Malin Space Science Systems that question! If you poke around their website you'll note that a lot more than just Quicktime videos will remind you of the 1990s.

Ahhh yes. Tables for all content, no css whatsoever. Those were the days, build a web site in 30 minutes and spend the entire budget in the following 30 minutes down the local.

I'm also a charter member from December 1979 because of the same letter. I also remember the no news to massive delay on information on space missions. If the networks were overly generous in my area we may get a 15 - 30 second glimpse of spacecraft photos. I astronauts were involved you might get a whole 2 minutes. Then 3 guys name Carl, Lou and Bruce came along and the rest is history! Thank you Sirs!