The Discovery of a Planet, Part 3: Planet X

The discovery of Neptune accounted for nearly all the unexplained motions of the outer planets of the Solar System. Nevertheless, several astronomers insisted that some unexplained residual motions remained, pointing to the presence of a ninth planet beyond the orbit of Neptune. Chief among the proponents of the “Trans-Neptunian Planet” was Percival Lowell (1855 – 1916), a traveler and idealist, scion to a wealthy and distinguished Boston “brahmin” family. At a time of increasing professionalization in the ancient art of observational astronomy, Lowell was a throwback to an earlier day. Despite his keen mathematical talent, which early caught the attention of Harvard’s Benjamin Peirce, he chose not to pursue a conventional academic career. Instead he joined the diplomatic corps, traveled in the Far East and published vivid accounts of his experiences in Korea and Japan.

In the 1890’s Lowell became the leading advocate of the theory that Mars was crisscrossed by an elaborate network of “canals.” Lowell believed that the canals were the work of an intelligent alien race, forced to divert water from the polar ice-caps by the drying up of surface water on their planet. In 1894 he founded the Lowell Observatory in Flagstaff, Arizona, for the express purpose of proving his views. 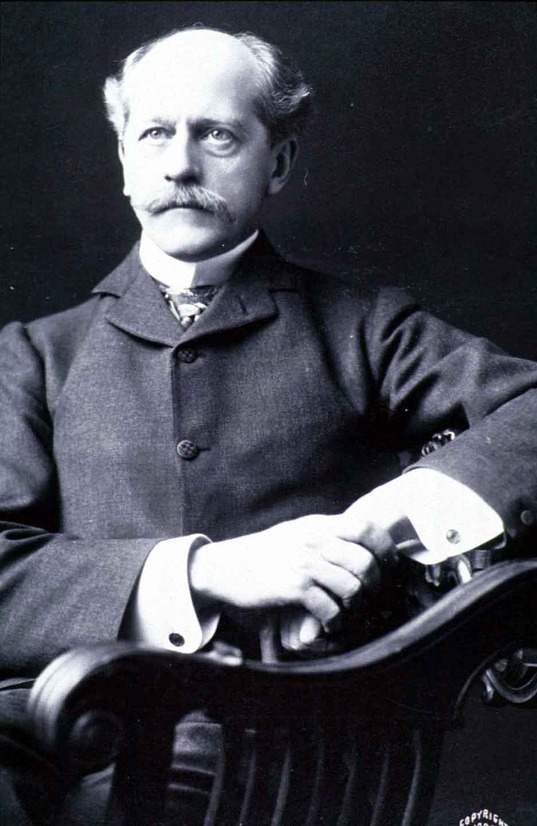 Sadly for Lowell, his theory of the Mars canals remained very much the minority view in the astronomical community. Where Lowell saw and drew canals, other saw nothing but patches of varying shades and colors on the surface of the Red Planet. Even at Flagstaff, where observations were conducted by his faithful students and assistants, no conclusive evidence could be produced for the existence of the Mars canals. Lowell’s reputation suffered, as many practicing astronomers came to view him as a dreamer and an amateur rather than as a professional colleague. The reputations of the observatory and the astornomers Lowell employed there suffered as well, and they felt marginalized in wider astronomical circles.

Perhaps in order to reestablish himself in the astronomical world, Lowell began to focus his attention on the question of a planet beyond the orbit of Neptune. Nothing, after all, would restore his reputation as effectively as the discovery of a 9th planet orbiting the Sun. By applying his mathematical skills to the perturbations in the predicted movements of the outer planets he became convinced that the planet was indeed lurking out there, beyond the orbit of Neptune. Based on his calculation he predicted it would be a gas giant, comparable in mass to Neptune. He named it “Planet X.”

Between 1905 and his death in 1916 Lowell conducted several searches for Planet X at his Flagstaff observatory. Using a 5 inch refractor, and later a 40 inch reflector telescope, Lowell conducted systematic observations of the regions where he expected the planet to be found. Unlike the discoveries of the previous centuries, which were accomplished by direct observation through an eye-piece, Lowell made use of new photographic techniques not available to his predecessors. By placing the plates at the telescope’s focus he acquired a detailed photographic image of the sky at that point. By exposing another photographic plate to the same region of the sky a few days later, Lowell could compare the two images for any sign of movement among the stars. In the early years he did so by simply placing the plates side by side for comparison, but in 1911 he acquire a blink comparator from Germany – the same one that Clyde Tombaugh would use 19 years later. This allowed for far more efficient and accurate comparisons to be made between the plates, but still, no planet was found. When Lowell died unexpectedly at Flagstaff in 1916 the observatory became entangled in a costly legal battle with his widow, which lasted for close to ten years. The search for Planet X was put on hold.

It was not until 1927, with their legal troubles behind them, that the staff of the Lowell observatory felt ready to continue in the quest of their founder. Under the leadership of Dr, V. M. Slipher, a former Lowell assistant who was now the observatory’s director, the observatory prepared to renew the search. With help from Abbott Lawrence Lowell, Percival’s younger brother who was now President of Harvard, they ordered a brand new 13 inch refractor telescope that would be devoted solely to the search for Planet X.

For the Lowell Observatory much was at stake. The Mars canal debate had cast a long shadow on the observatory and its staff, which had not lifted even years after Lowell’s death. And although V. M. Slipher was conducting groundbreaking research at the observatory into the spectrum and speed of receding galaxies, nothing would redeem the name of the observatory and its founder like the discovery of the planet he predicted. As the new telescope was being assembled in its purpose-built dome in 1928, Slipher began to consider who would best be suited to conduct the hard nightly routine of a systematic planet search. He himself, and the observatory’s other astronomers, his brother E. C. Slipher and C. O. Lampland, were each busy with their own lines of research. Hiring another professional astronomer was too expensive for the observatory’s strained budget, and Slipher was also concerned about bringing on board an additional astronomer with his own research agenda. It was around that time that he received a letter from a farm boy in Kansas containing drawings of Mars and Jupiter taken with a home-built telescope. His name was Clyde Tombaugh.