Kaguya Set to Strike the Moon

According to the latest information from the Japanese Space Agency JAXA, the lunar orbiter Kaguya will slam into the Moon at 6:30pm (GMT) on Wednesday, June 10, 2009. Dr. Shin-Ichi Sobue, who is a member of the mission's flight team, tells us that Kaguya will likely impact deep in the Moon's southern hemisphere, near the Gill crater. This information, however, could change by the time the spacecraft strikes the lunar surface.

Kaguya is Japan's cotribution to the interantional fleet of spacecraft that have been studying the Moon in recent years. Launched on September 14, 2007, it entered lunar orbit less than three weeks later. The main spacecraft then launched two small satellites, which allowed it to make accurate gravitational measurements of the entire circumference of the Moon. One of the satellites, named Okina, ended its mission on February 12 of this year by slamming into the Moon. On June 10 Kaguya's 3-ton main spacecraft will follow suit, ending Japan's first foray into lunar exploration. 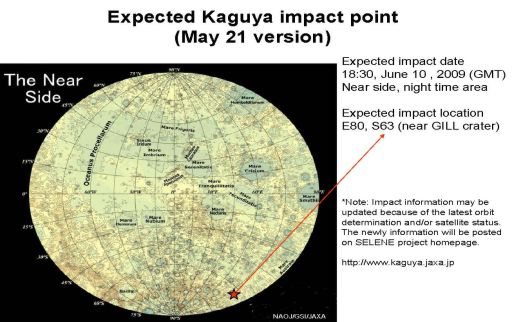