Pretty Pictures of the Cosmos

Editor's note: Adam Block is an award-winning astrophotographer whose work is frequently featured on NASA's Astronomy Picture of the Day website. I've invited him to share some of his pretty pictures here on The Planetary Society blog. For his first post, I collected four of his recent works. Enjoy!

The Eagle Nebula ("Aquila" can mean Eagle) is certainly one of the most imaged deep sky objects in the sky. Few pictures are more iconic than the "pillars of creation" as captured by the Hubble Space Telescope (HST). Here you can see the pillars as well as the surrounding nebula in full color.

Ultimately you can scroll around the full field and see the detail in many of its famous parts (HST captured several other regions shown in this picture as well). 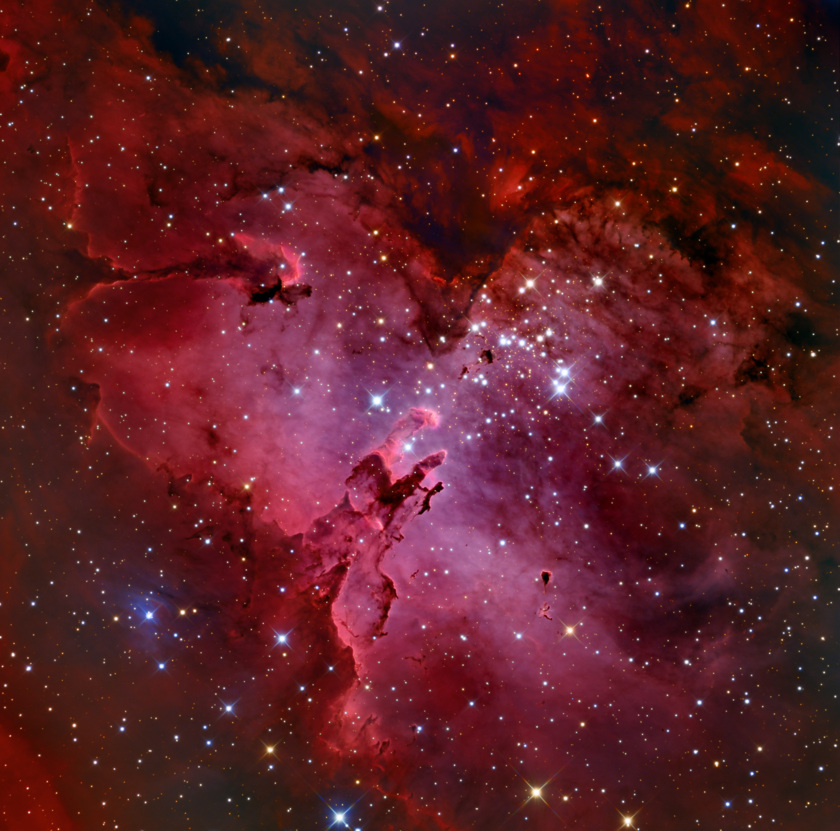 In a Universe infinite in time and luminous stuff, like stars, we would expect to see light from stars in every direction we look. This would mean the night sky would not be dark and instead infinity would glow. This isn't the Universe that we live in; but if we did perhaps this view towards the center of our galaxy simulates the feeling.

If every pixel detected the light of a star, this picture contains many millions of stars. To add to the hyperbole NGC 6522 (top right) and NGC 6528 (lower left) are two globular clusters with their own 100,000 suns.

This is one of my favorite star fields. Few others pair globular clusters amid a sea of stars quite like this. It is a bit of a challenge to capture this area from the northern hemisphere since it is so low in the sky and requires steady, clear conditions.

For best effect, scroll around the full-size image. 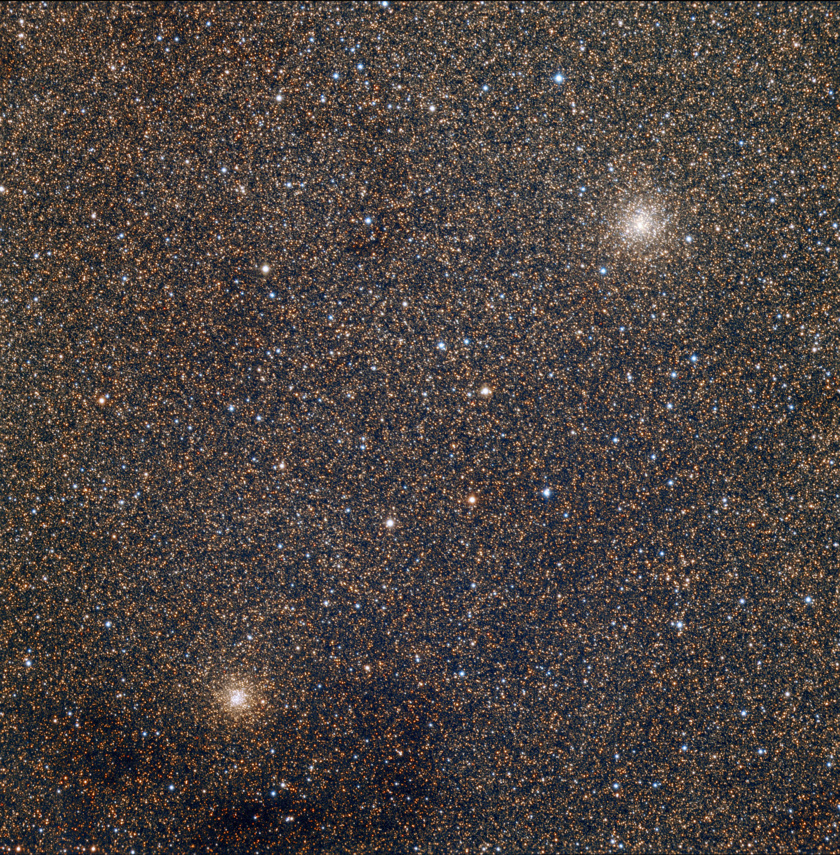 Here is an image of the dying star Abell 36.

The white-hot, now exposed, core of this once sun-like star shines powerfully in ultraviolet light. Indeed, with a surface temperature of 73,000K (the Sun is around 5,500K at the surface) this stellar remnant is *brighter* in eye-ball-invisible UV light. Like a natural "black-light" the UV photons make the outer gases glow- we would not see the beautiful colors of these objects if the central star only emitted visible wavelengths of light. The Sun probably has a white dwarf-to-be in is core. Luckily the outer gases of the Sun shield us from its Earth-sterilizing heart... for now. 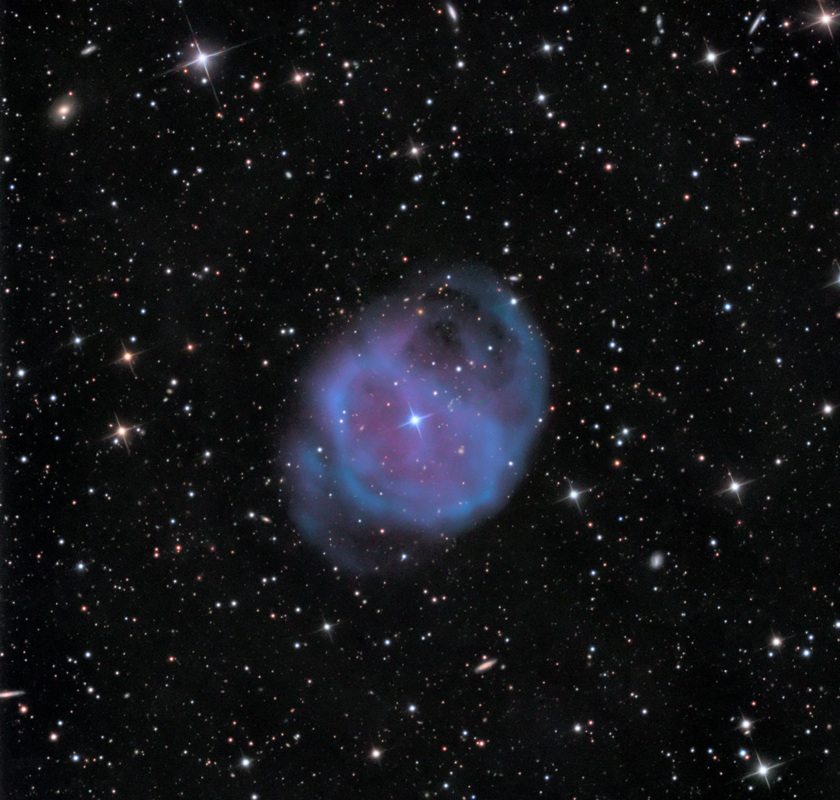 NGC 6085 (the spiral galaxy) and NGC 6086 (the large elliptical galaxy) are the two highlights of this deep space vista.

However, the only way to really take in this image is to scroll around the full view. Although no single object makes this image, the panoply of faraway galaxies inspires through accumulated inspection when looking across these vast distances deep into the cosmos. 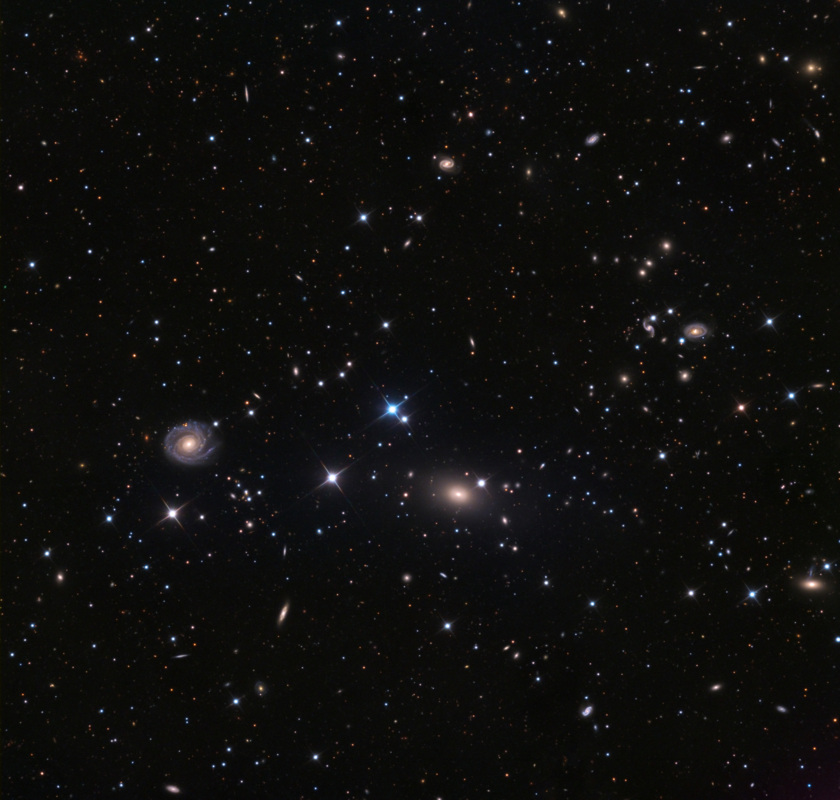