NGC 4414 is a well-known spiral galaxy whose Hubble Space Telescope (HST) image is ubiquitous on the internet. However, only last year was more attention given to this galaxy in the form of deep, wide-field imagery. A paper by de Blok (no relation, but interesting) shows the now-known star stream halo (see below for the reference). As is often the case for scientific imagery however, a full-color high-resolution image had not been captured showing the galaxy and the star stream shell in a natural way—until now: 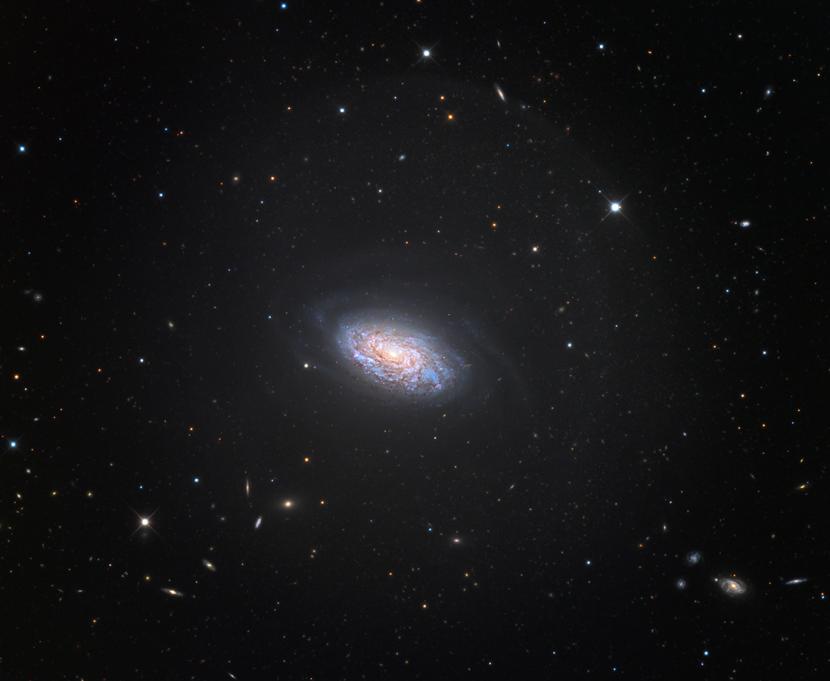 This view of the unbarred spiral galaxy NGC 4414 was acquired in January 2015. View additional information. 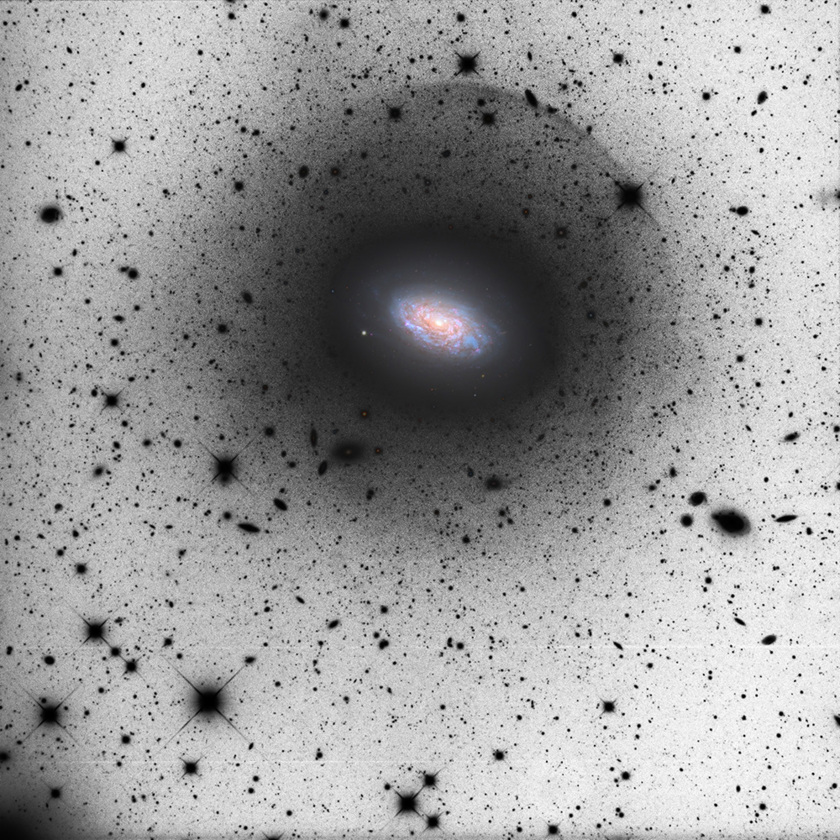 This high contrast, negative view of the unbarred spiral galaxy NGC 4414 better shows the structure of the galaxy and its shell of stars.

This work was done in collaboration with Dr. David Martinez-Delgado (ARI) as part of public outreach from the UA Science Mount Lemmon SkyCenter. The "press release" (that is of my own doing) is below, as well as represented on this page:

We live in a Universe in which we see only highlights. Most of the matter of this Universe is cold, dark, and clumpy stuff that neither absorbs nor emits light. Its existence is inferred from gravitational influence by how it, like the stuff we are made of, warps space-time. Clumpy is the key. According to computer models that astronomers create, dark matter fragmented the early Universe and promoted the formation of small (dwarf) galaxies. Larger galaxies, like our own, were built from the accretion and collision of smaller ones.

If true we expect to see many more dwarf galaxies today than we do. Some astronomers, such as Dr. David Martinez-Delgado (ARI), investigate why we do not see as many as predicted today. It could be that dwarf galaxies were assimilated into larger galaxies at greater rates in the past or perhaps they are still around but difficult to see. So Dr. Martinez-Delgado and his team look at spiral galaxies in search of dwarf galaxies that may now be falling into larger ones. As they fall they leave trails of stars that loop around large galaxies. As the stars orbit about they may eventually spread out to form even more diffuse shell-like structures.

These star streams can support explanatory theories that include cold, dark matter which ties in to the evolution of our Universe. The accretion of dwarf galaxies may also trigger higher than expected star formation within the disks of large galaxies. Over the last 10 years many examples have been found by taking very long exposures of relatively well known galaxies. Due to the amount of time necessary, this is a niche that amateur astronomers have helped fill to confirm star streams. The SkyCenter, in collaboration with Dr. Martinez-Delgado’s group, has stepped up to help. The SkyCenter took long exposures of NGC 4414 to capture what could be a dispersed dwarf galaxy surrounding this beautiful spiral galaxy. There are many Hubble Space Telescope pictures of this well-known galaxy. However the halo extends well beyond the field view of many large telescopes such as HST. Here then rendered as a color picture for the first time is the star stream (shell) surrounding NGC 4414:

The shell of stars surrounding NGC 4414 is faint. Click on the thumbnails below the main image to see larger views. A high contrast, negative view is also available to show the structure better. In total exposure time, it took 27 hours to capture this feeble glow that may help solve big mysteries. The SkyCenter hopes you think the time was well spent to show you something virtually no one has seen before.

And the first paper to publish information on the shell surrounding NGC 4414 is available here.