Pretty Pictures of the Cosmos: Overlooked

Journey with me to one of the often overlooked galaxies of the Fornax Cluster: 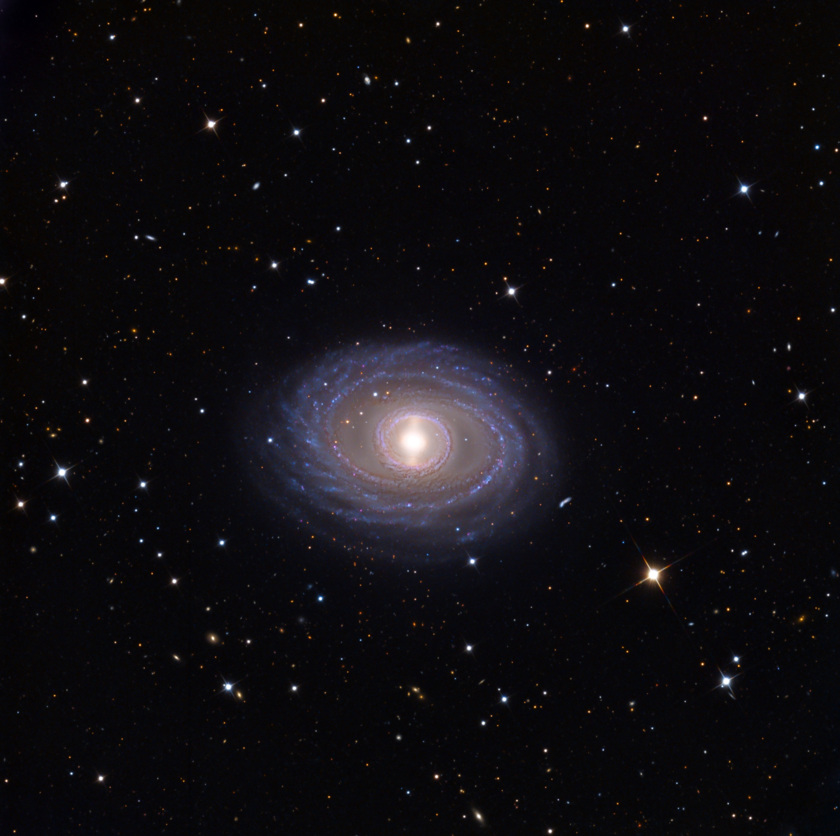 This view of the galaxy NGC 1398 was acquired in October 2014. View additional information.

NGC 1169 is a little-studied galaxy that we view through the outer spiral arms of our own galaxy: 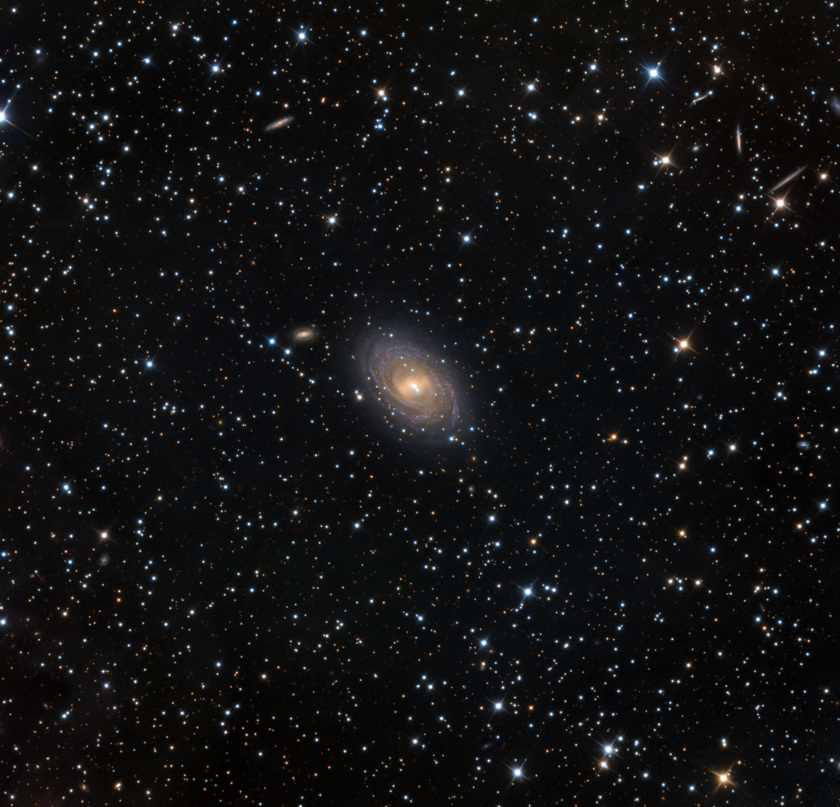 This view of the spiral galaxy NGC 1169 was acquired in January and September 2014. View additional information.

At one hundred million light years away it isn't really in the neighborhood and many of the stars in its disk must be intrinsically bright. As viewed from here (Earth) however this galaxy is quite faint and many hours of exposure time are necessary to see it well through all of the intervening (and somewhat distracting) stars of our own galaxy. This image may be the sharpest full color image of this galaxy taken to-date.

P.S. The top right of the frame in the large view has a cool grouping of galaxies including a striking edge-on disk galaxy.

Recently a father and son (the youth was considering studying physics and astronomy) visited me at the SkyCenter atop Mount Lemmon during one of my one-on-one programs. We settled on capturing an image of an nebula that receives very little attention: 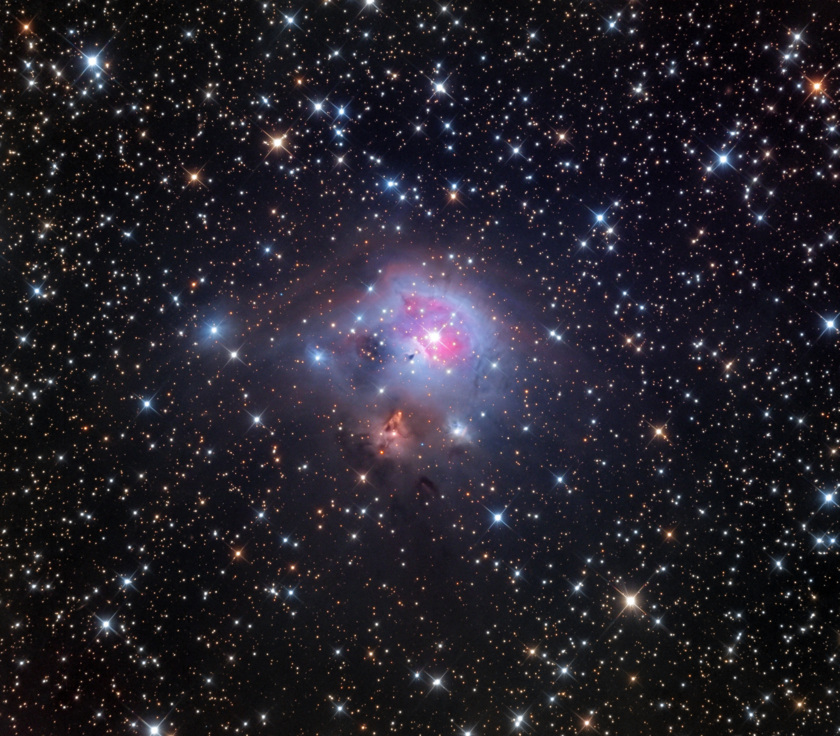 This view of the nebula NGC 2282 was acquired in November 2014. View additional information.

According to a paper on this object this nebula is around 5 light years across and some 5,500 light years away. Perhaps a few hundred stars are being born within this cloud and many current members of the cluster are only 5–10 million years old.

To my knowledge this is the highest resolution full color image of this nebula that has ever been published. Although I was *very* belated in completing the processing of this image for my guests—ultimately I presented the final result to them on Christmas Day. Like a gift given during the holiday season—I hope they are pleased with the result and that likewise I hope you have many more equally enjoyable surprises in 2015!

You will note that "helm" is found in the word overwhelming. And in the case of NGC 2359, Thor's Helmet, that is exactly as it should be: 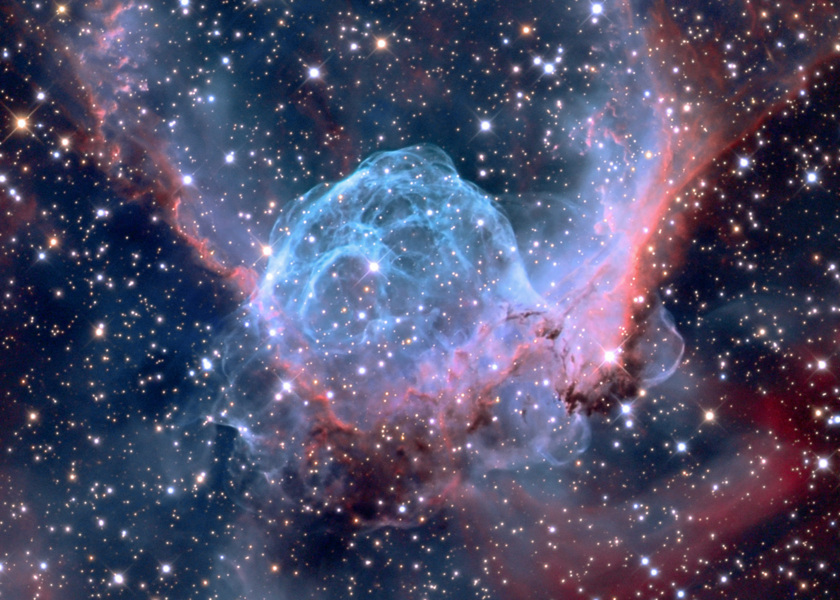 This view of Thor's Helmet was acquired in October and November 2014. View additional information.

There is so much going on in this field. The Wolf-Rayet star near the center of the bubble is responsible for the glory found here. Two versions (thumbnails) are located below the image which let you explore the nebula in detail or just admire the entire field zoomed out./p>

I really wanted to post this on a Thursday (Thor's Day) of course...but I couldn't wait. :)

At -40 degrees in declination this object does not climb much higher than 15 degrees above the horizon from the Mount Lemmon SkyCenter. Thus without moving considerably farther south (Chile or Australia!) it is truly rewarding to be able to capture it at all: 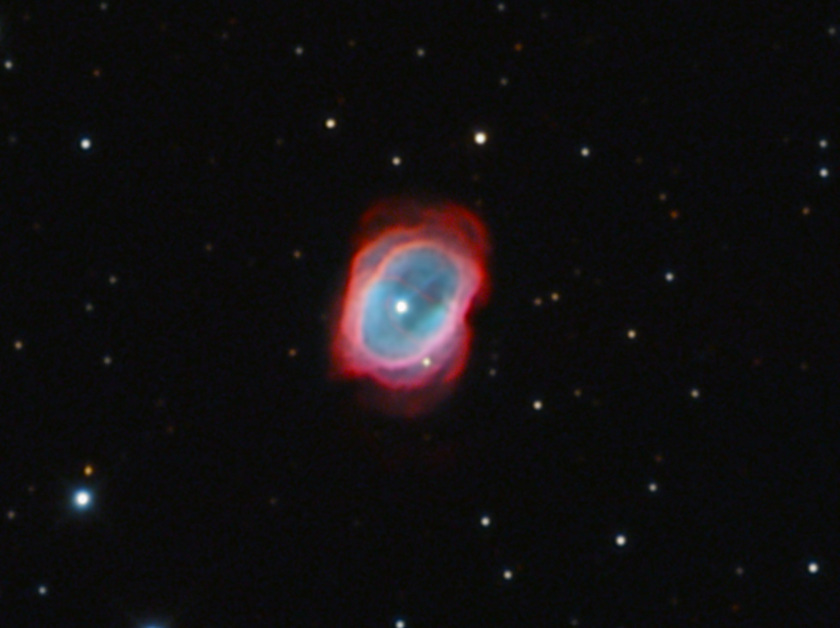 This view of this nebula was acquired in April 2014. View additional information.

A good fraction of the images were taken with only a portion of the telescope mirror seeing the sky while the other fraction stared at the wall inside the observatory. In brightness and form it is second perhaps only to the more famous Ring Nebula. Deeper exposures show an extended, rippled halo of gas.

Those are some awesome photos! Those make you want to get into a starship and go exploring! Thanks for sharing those great images! They are all beautiful! My two favorites are the 1st two.