Last week, I received a press release (PDF) with the headline "Big Bend National Park Designated As International Dark Sky Park." Big Bend is one of the dark-sky places that Tyler Nordgren visited during his "Stars Above, Earth Below" tour of America's national parks in 2007-2008. It is also one of my brother's favorite places on Earth. So I asked Neil to write something about this announcement for me. Neil is a director, writer, actor, teacher, and producer. He has written over 100 articles for major magazines such as Gotham, Los Angeles Confidential, Vegas, USA Today, and Delta Sky, as well as a trivia book, Fact, Fact Bullsh*t --ESL.

When I was a teenager in Fort Worth, Texas, there was an aura of mysticism around "the eighth-grade trip." We didn't know much about it. We only knew that it was the final rite of passage from middle school to high school, that it was supposed to ?change' you, and that it was in some faraway magical place called Big Bend.

We were skeptical. The seventh-grade trip, to Austin, had been fun, sure, but not the stuff of legend. We'd seen the previous class come home all hugs and twinkling eyes, but we just chalked that up to their weirdness. When we peeled our sweaty bodies from the vinyl bus seats after a 10-hour ride and stumbled out into the Texas sun, we believed we were in for misery.

Boy, were we wrong.

Big Bend National Park is one of those places that feels so glorious and alien that it has the power to reach even jaded eighth-graders. Visiting it is like visiting another planet -- no, I take that back; it's like visiting our planet. It's a part of the Earth that feels very planetary, all scrub and dust and strange color... and sky forever.

I think the fact that it's tucked away in a road-less-travelled hard-to-reach part of our country contributes to its ability to transform. Our class, replete with jocks and nerds and cheerleaders and grunge kids (that was me -- Nirvana's Nevermind was number one and I had a new reason for living), grew uncharacteristically quiet as we hiked the trail to the South Rim. As we climbed, we dodged blades of agave, yucca, and sotol, marveled at the tangled explosions of prickly pear, and wove in and out of Mexican piñon pines and rough-barked juniper. I remember turning to the girl I had a crush on and saying, "I thought deserts were supposed to be barren!"

Atop the rim, out of breath, none of us could contain our beaming smiles. It's an incredible view -- I think my favorite view, anywhere. The cliff drops 2500 feet or so, and beyond is a sprawling, rolling valley of purples and yellows and browns, the river, piles of rock and lava, and Mexico in the distance.

But the most breathtaking thing about Big Bend is not what's underfoot. It's what's overhead. Big Bend has the distinction of having the darkest measured skies in the lower 48 states. I remember being unprepared for what I saw on our first night in the park when I looked upward. More stars than I'd even imagined to exist. Great swaths of fairy-dust strokes, with pin-point stars and big ol' flashlight-bright stars, and stars of different colors, and even whorls of ghostly nebulae. If we saw this every time we looked up at night, we would never forget that we are a tiny, insignificant station stop in the middle of an uncomprehendingly vast, gorgeous cosmos.

We did return from the trip feeling transformed, feeling humble (is that possible for a 15-year-old?), and feeling as though we'd received a wonderful gift.

Since my teen-aged years, I've returned to Big Bend multiple times, and it's a favorite getaway for my wife and me. It is one of the least-visited national parks in the country, with around 350,000 visitors per year (that's significantly less than visit Times Square in a day), and with over 800,000 acres, one sports a good chance of running into no one over the course of a day's hike.

This month, the International Dark Sky Association designated Big Bend as an International Dark Sky Park, confirming what I had already discovered twenty years ago: it's an incredible place to stargaze. The IDSA gave the park "Gold Tier" status, declaring it free "of all but the most minor impacts of light pollution." That means the park is not only remote enough to have naturally dark skies, but that the folks who run it have done an excellent job maintaining an extremely low-impact park lighting system, using the latest technology to preserve the view and save a lot of energy. Nearby towns such as Alpine routinely host star parties, and it's about 150 miles to the University of Texas' McDonald Observatory.

Maybe it's time you went to Big Bend, and treated yourself to a well-earned exploratory mission to planet Earth. 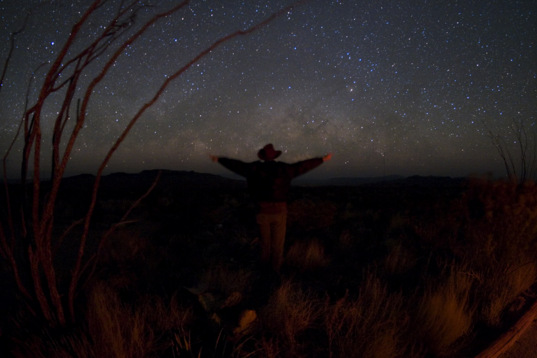 The Milky Way and Tyler Nordgren

In March and April, the winter Milky Way sets in late evening while the summer Milky Way rises in early morning. At the transition between the two events, the Milky Way wraps around the horizon, provided you are near a latitude of 27 degrees north and have absolutely no sources of light pollution along the horizon. The darkest place in the United States with clean, dry air at that latitude is right here in Big Bend National Park. At 3:30 am I watch the Galaxy rise. Before me is the center of the Galaxy, 8,500 parsecs (30 thousand light years) away. To my left is Cygnus, the direction the Sun travels as it orbits the Galactic center. To my right is the direction from which we have traveled. The Sun makes one complete orbit every 250 million years or so. Notice the Milky Way looks dim and reddened near the horizon. This is due to dust in our atmosphere, just as the light of the rising or setting sun is red and dim. Now, however, it is the light of a billion sunrises.
(From Tyler Nordgren's Stars Above blog, March 2008) 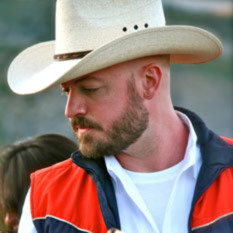