I arrived in Nantes just in time to see two major figures in the Planetary Society win big awards. 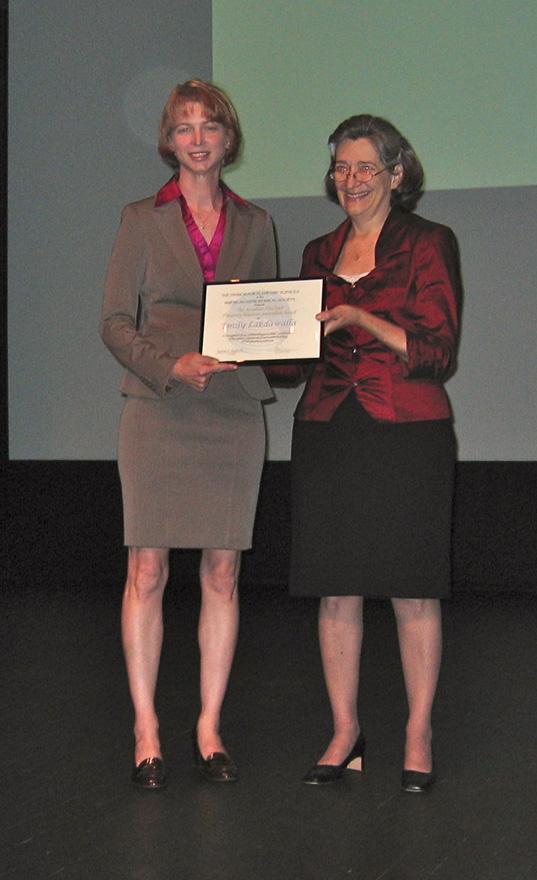 Melissa McGrath presents Emily Lakdawalla with the 2001 Eberhart Prize from the DPS, October 3, 2011

Emily Lakdawalla was awarded the Jonathan Eberhart Planetary Sciences Journalism Award for her blog entry entitled "The Phoebe Ring." Emily graciously accepted the award, stressing the need for the community to be aware that many who study planetary science related topics will not become working scientists per se, but might be scientists who bridge the gap between the scientific community and the public -- in other words, scientists who do journalism, rather than journalists who cover science and who may not understand enough about the field to communicate clearly, accurately and engagingly.

It was wonderful to see Emily recognized for the work she does. Not only does she convey the work of the professional scientific community to enthusiasts, but she has become a key catalyst in getting enthusiasts' work publicized and raising of awareness of it within the scientific community. By using the work of people like Gordan Ugarkovic, Daniel Machácek, Björn Jónsson, and Mike Malaska (and that is a far from comprehensive list), she has provided a place for their talents to be recognized. Emily is an excellent journalist, and through her work she provides a two-way street of communication, something key to developing real public engagement in planetary exploration.

Jim Bell won the Carl Sagan prize for outstanding communication by an active planetary scientist. Jim has always tried to involve those outside the professional planetary science community in his work, whether it be through ordinary outreach or by collaborating with amateurs.

One of the things mentioned was his work in the 1990s with the Marswatch program, which brought together observations from professionals and amateurs in order to monitor Martian weather and albedo (light and dark) features. Prior to 1997, when Mars Global Surveyor began a string of continuous orbiter coverage that continues to the present, such work was of particular importance. As a high school student, I contributed to Marswatch. In particular, I helped Jim out in early 1996, as Mars was approaching solar conjunction, and data from microwave-wavelength observations indicated a dust storm, and there were discussions about whether or not the dust storm was global in nature. Along with one other amateur, I was able to help verify that some of the broad albedo features were still visible, meaning that the dust storm was not global. Seeing my work actually used by a working scientist was an unbelievable experience, and encouraged me to get more involved.

Jim has written many popular books, such as Postcards From Mars, and he was behind the voluntary release of the raw images from the MER Mars Rovers in real time, allowing enthusiasts to ride along with the rovers. Between Jim and Emily, I can't think of anyone else more deserving of these awards. Congratulations to the both of you!