Guest Post: Ray Sanders: What's Up in the Night Sky This Fall?

Ray Sanders is currently studying astrophysics at Arizona State University where he is researching variable stars. Ray volunteers at ASU's "Astronomy Open House" and is co-director of outreach for Yuri's Night 2012. He writes for Universe Today and his own astronomy outreach project, "Dear Astronomer" as well as this blog.

The summer heat is starting to cool off and the swarms of mosquitoes are nearly survivable without heavy artillery. For some backyard astronomers, fall offers cool nights and comfortable weather to enjoy the stars by. Stargazers both young and old have many opportunities this fall to view planets, meteor showers, galaxies and nebulae, including the Orion Nebula (M42). Here are some of the highlights for this fall's viewing season. As usual, if you need help finding objects, consider a copy of Stellarium (free!) or if you have a tablet or smartphone running android, try Google Sky (also free!).

September: Starting this month, Jupiter can be seen low in the east, after about 10:00 P.M. local time (depending on location). By midnight the Pleiades are also visible in the east. During early mornings (just before sunrise), viewers can catch Jupiter high in the south and Mars to the east. One of my favorite constellations, Orion, is also visible low in the East. The Moon enters its full phase on the 12th. Fans of dwarf planet Ceres will be happy to know it reaches opposition on the 16th. 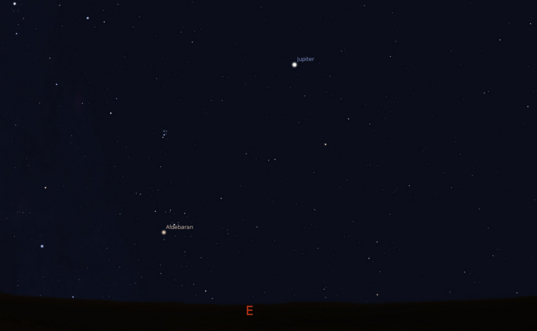 Jupiter in the eastern sky after sunset in September 2011

Egg balancers in the northern hemisphere will be up to their hijinks on the 23rd, as that date marks the fall equinox. On the topic of balancing eggs during an equinox, Phil Plait has some interesting thoughts on the matter.

Ceres isn't the only object that experiences an opposition with Earth in September. On September 25, Uranus will be at its brightest, as it reaches opposition (hold the jokes, please). Uranus will shine at just under magnitude 6, so those at a dark site should be able to see the planet low in the west without optical aid. Of course, it always helps to have a telescope or good binoculars to see Uranus!

October: The first few days of October feature a waxing crescent moon, so there will be little worries about moonglow getting in the way of stargazing (unless you prefer moongazing!). On October 8, the Draconid meteor shower peaks. Despite the nearly full moon, viewers should be able to get a decent show since the radiant in Draco is in the North. Look to the north after midnight local time. Just a few days later, on the 11th, the moon reaches its full phase. Later in the month, another meteor shower graces the night skies. On the 22nd, after midnight local time, look to the area around Orion to check out the Orionids. Shortly after midnight however, the moon will be rising and will interfere with viewing. October wraps up with a new moon on the 26th (no full moon on Halloween this year!) and Jupiter's opposition on the 28th/29th.

November: Early in November, Mars will be visible in the East well before dawn, (after 2:00 A.M.) and Orion will be high in the Southern sky with Jupiter to the West. November 10th marks the full Moon. November's highlight is the Leonid meteor shower, which peaks during the 17th/18th. Watch in the vicinity of the constellation Leo after midnight local time, up to a couple hours before dawn. You'll also get some great views of Mars in the East. The moon reaches its new phase on the 25th and by month's end early risers can spot Saturn low in the east just before sunrise. 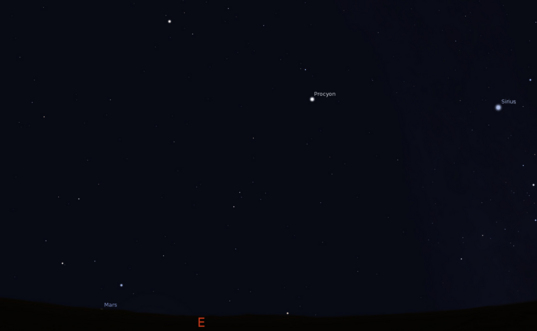 Where to look for Leonids overnight on November 17/18