Europa on the Ropes

ALL THESE WORLDS ARE YOURS EXCEPT EUROPA. ATTEMPT NO LANDINGS THERE.

Arthur C. Clarke wrote these words three decades ago, when Europa's uniqueness as a potential alien habitat was first realized. Unfortunately, we have obeyed this fictional command.

Partly that's because Europa's surface is a terrible place. We often say this about Mars, but Europa is worse in practically every way. It is over three times farther from the Sun, and so receives ten times less sunlight. As a result, while a warm day near the Martian equator can exceed 0Â°C, Europa is at best 140 degrees below. Whereas Mars has less than 1% of Earth's atmospheric pressure, Europa's "atmosphere" is a billion times more rarefied. Neither provides much protection from ultraviolet or particle radiation, but at Europa the bombardment of charged particles from elsewhere in the Jupiter system leads to crippling radiation doses that accumulate millions of times faster. All of these factors make Europa's surface a difficult place for spacecraft (or life) to operate.

Yet deep beneath this surface the environment is very different. Several lines of evidence point to a global salt-water ocean on Europa, hidden from direct view by a frigid icy shell. Like the mid-ocean ridge ecosystems on Earth, Europa's oceanic realm could host life forms for whom the surface conditions are of little concern. We currently have no idea whether such life exists or not. But if ocean water ever reaches Europa's surface, then perhaps its frozen residue could be examined for chemical clues by a carefully aimed lander.

If we did send such a mission to Europa, how would we choose where to land? Two weeks ago, NASA held the final public workshop to select a landing site on Mars for its rover Curiosity, which will launch later this year. Scientists debated the pros and cons of four candidate sites using data returned by the four successful Mars orbiters of the past decade. The debate was well-informed: more data are available at any one of Curiosity's small candidate landing areas than have been returned from all of Europa to date. With comparable imagery and spectral data from Europa, we could find the geologically youngest terrains, possibly identify salts from the deep ocean, and learn what hazards (icy boulders or cliffs?) a Europa lander would need to avoid or overcome. A mission to orbit Europa and collect these data has been planned for over a decade, but has faced repeated cancellations, reinventions, and delays. Current budget projections for space science are lean, and the recent Planetary Science Decadal Survey brought little hope for improvement by ranking the Europa orbiter behind Mars sample return. 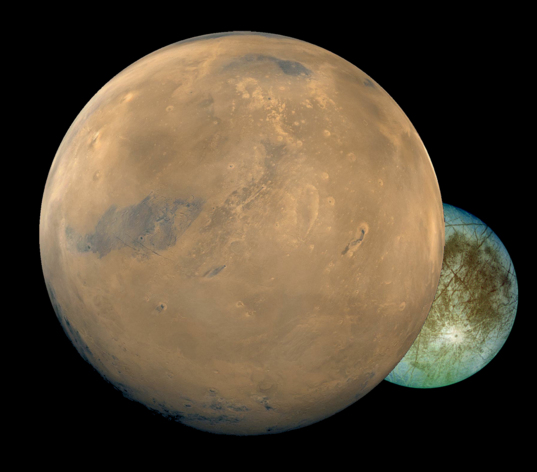 For now, Mars continues to eclipse Jupiter's moon Europa (shown here to scale) in NASA's flagship mission plans, but not in its appeal to many planetary scientists.

NASA is already hard at work on cheaper options for robotic reconnaissance of Europa, but even these will be impossible in the coming decade without additional funding from Congress. For anyone interested in the search for life beyond Earth, this should be a call to arms! Public support played a major role in getting the New Horizons mission to Pluto off the ground; perhaps a similar campaign can help save Europa. Giving up now would delay more than just the Europa orbiter. Ten years ago, NASA scientists and engineers were talking about Europa ice penetrators, submarines, and sample return—a true Europa Exploration Program analogous to what we have for Mars. An orbiter could be the first key step toward this vision.

Is it all worth the cost? I think so, even at the risk of delaying other missions. We know of no place in our solar system more likely to be inhabited today by life unrelated to us. I am also a strong proponent of continued Mars exploration, and we should thoroughly explore both of these worlds. Ancient Mars was so diverse that multiple sample return missions are likely needed to fully understand whether, where and when life may have evolved on that world. But the same might be true for Europa; our understanding of its history is limited by the data we have.

More broadly, searching for life on Mars will give unique insights into the probability of life evolving on planets in the habitable zones around their stars (i.e., at the right distance for surface water to be liquid). Yet it will not allow estimation of the total abundance of life in the universe. For that, we must explore all classes of habitats, including subsurface ocean worlds with uninhabitable surfaces. Such worlds may be common throughout our galaxy and others, but do they host life? Europa is the best place we know to start looking. 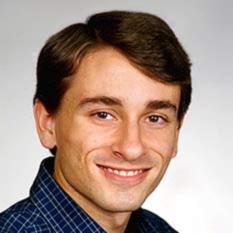