Today, Elon Musk, CEO and chief rocket designer of Space Exploration Technologies (SpaceX) -- as well as member of the Planetary Society Board of Directors -- unveiled plans and price points for their new Falcon Heavy. 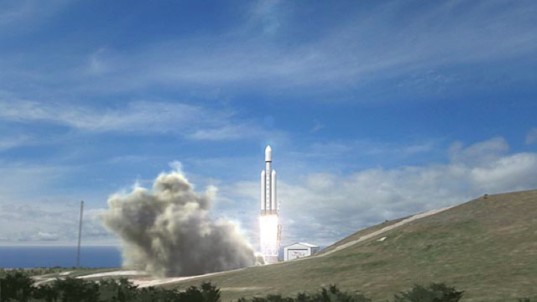 The Falcon Heavy is SpaceX's entry into the heavy lift launch vehicle category.

The Falcon Heavy will be offered on the commercial market for $80 - $125 million, compared with roughly $1 billion for a shuttle mission. SpaceX said that their new rocket will be capable of carrying more payload to orbit or escape velocity than any previous rocket other than the Saturn V.

"SpaceX is once again taking the lead in spaceflight," said Bill Nye, Planetary Society Executive Director. "Elon Musk and his team have a new approach to an old space-age problem -- cost. SpaceX not only states the size, shape, payload weight, and altitude capability of their new rocket; they've included the price. Rather than just let the cost of missions climb and climb as missions are planned, Space-X tells its customers the cost up front. To the stars, Elon. Carry on..."

Musk announced that the Falcon Heavy will be brought to the Vandenberg, California, launch complex by the end of next year, with liftoff to follow soon thereafter. First launch from the Cape Canaveral launch complex is planned for late 2013 or 2014.