In our search for solar system analogs, we'll jump now to the northern hemisphere -- way north -- to Iceland. Last year I attended a field excursion to the Grimsvotn volcano in association with the IAVCEI (International Association of Volcanology and Chemistry of the Earth's Interior) meeting held in Reykjavik. This excellent field trip was run by Magnus Gudmundsson of the University of Iceland, and included several planetary scientists (James Head, James Rice, Jarmo Korteniemi, Chris Hamilton, Motomaro Shirao). Since the Grimsvotn volcano sits partially underneath the largest continental glacier outside Greenland or Antarctica, the Vatnajokull Glacier, we drove up the rough western glacier ablation zone, onto the glacier itself, across the glacier to its interior where the volcano sits, and across the glacier to the southeastern terminus. This all took over 16 hours of driving alone. The Icelandic Glaciological Survey drove us across the glacier, in modified trucks and vans so tricked out they were nearly unrecognizable. The tires were almost as tall as me, and the vehicles drew lots of attention wherever we went. We were privileged to stay at the Glaciological Survey huts on the rim of Grimsvotn, providing us a good vantage point into the volcano interior and giving us a good base for exploring the volcano. 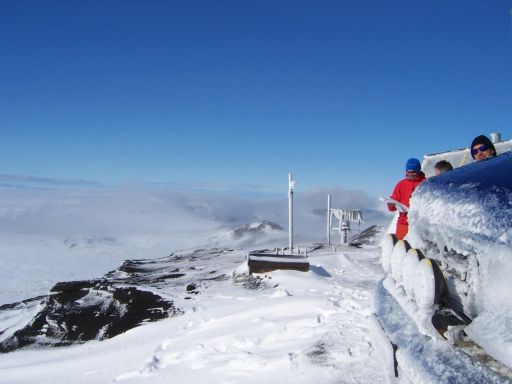 view of the Grimsvotn caldera wall from the Icelandic Glaciological Survey huts, with the ice-covered front of a truck. Jim Rice (yes, he's tall) is peeking around the truck hood for scale.
Grimsvotn is a particularly interesting volcano because of its lava-ice interactions. Since the volcano erupts through a thick coating of glacier ice, lots of interesting things happen here that don't happen in Hawaii, for example. For one thing, extra water in the near surface region leads to more explosive eruptions. We think this may be happening on Io as well, only with sulfur as the volatile rather than water. Explosive eruptions occur, blanketing the glacier with black basaltic cinders, and then snow falls, adding to the glacier and covering up the cinders. This process happens over and over, leading to a layering effect of snow on cinders on snow that can be seen in the caldera walls. Since there appears to be a constant blanketing of Io's volcanic terrains with sulfur dioxide, this same layering process may be happening on Io as well. Close-up views of its caldera walls, which we do not yet have, would reveal if this is true. 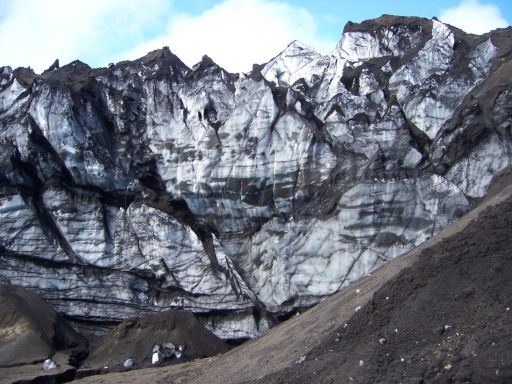 view of Grimsvotn's caldera walls. Note the interlayered basaltic volcanic ash and glacial ice.
I could go on and on about other good Io analogs and spectacular glacial and volcanic terrains from the Grimsvotn area, but I have Iapetus in the title, and here's why: There has long been discussion about the dramatic difference between the light and dark terrains on Saturn's moon Iapetus. This body's leading hemisphere is thought to be coated in an unusually dark dust, and its trailing hemisphere has unusually bright material, probably fairly fresh ice or even "snow". The question for these terrains on Iapetus is usually, is it dark on light, or light on dark? If dark on light, this would imply the dust blanketed the surface later than the ice, perhaps acquired from dusty regions in its orbit. If light on dark, then Iapetus' dark surface has been coated by ice in some process that has released this volatile from elsewhere on Iapetus more recently than the emplacement of the dark coating. 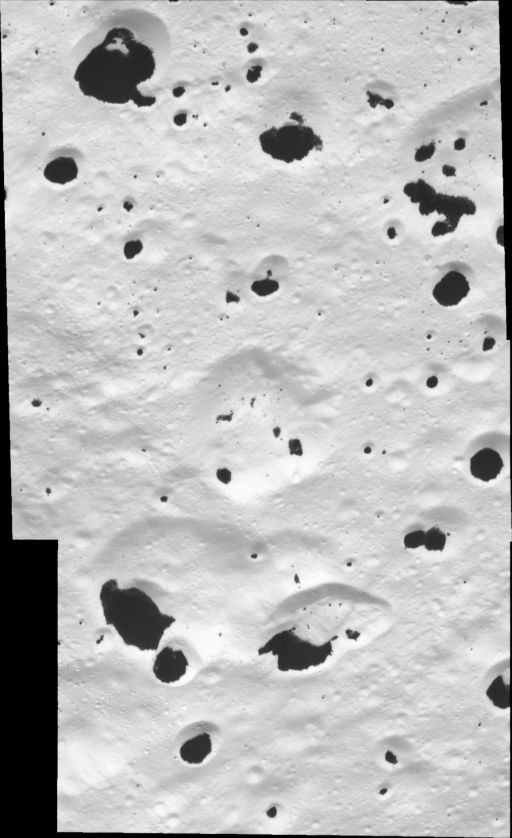 t high resolution, terrain in the transition region between bright and dark hemispheres on Saturn's moon Iapetus reveals a spotty appearance reminiscent of a Dalmatian. The bright material on the frozen surface of Iapetus, 1,468 kilometers (912 miles) across, is water ice, and the dark material is likely carbonaceous in composition. The dark material is preferentially found at the bottoms of craters. Bright water ice forms the "bed rock" on Iapetus, while the dark, presumably loose material apparently lies on top of the ice.
What I saw on Grimsvotn made me realize the situation may be more complicated. First, our observations of the layering in the caldera wall showed that both processes -- light covering dark and dark covering light -- happen in that region, but just at different times. From above, we could only observe the most recent event. Second, walking across a terrain where we could see both materials together showed me there is a feedback between the two. The dark materials absorb solar energy, increasing their heat. Any small amounts of dark ash on light glacial material soon accelerates the melting of the snow, exposing more dark underlying material, leading to a positive feedback in the melting. A new snowfall could reset the process. So after visiting Grimsvotn, my conclusion for the question of, is it dark over light, or light over dark, is -- it's both! This is a very simplified version of the conclusion that Cassini scientists, after their own careful thinking and modeling, have also come up with. 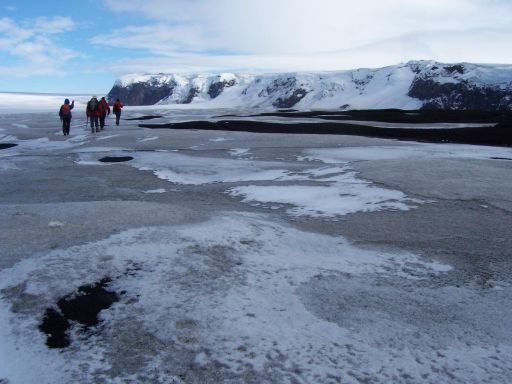 he group marches across the Grimsvotn caldera floor, on light/dark terrains reminiscent of Iapetus.
Thanks to Dr. Gudmundsson and his team, we were able to see close up and carefully consider unique processes in an extreme environment, which are often what we find in planetary studies.

Jani Radebaugh is an Assistant Professor of Geological Sciences at Brigham Young University. Although a planetary scientist, she specializes in the study of three moons: Titan, Io, and Earth's Moon. She worked with the Galileo team as a graduate student, and is now a Cassini RADAR Associate Team Member. Since Earth is also a planet, she has made it a personal goal to visit as many places as possible with planetary connections. Destinations covered thus far include Iceland, Antarctica, Hawaii, and her favorite, the U.S. desert west.