This is a special day...

It is a day where when all humans should take time to celebrate the momentous achievement that put two brave explorers on the face of another world. As Sir Arthur Clarke once famously said, the Apollo voyages will likely be the only events for which the 20th century will be remembered in the future, when humans live throughout the Solar System and beyond. While you're at it, you can consider the sheer audacity of an American President who challenged his country to undertake the greatest adventure in all history when the sum total of U. S. spaceflight experience was one fifteen-minute suborbital flight. Or the sheer magnitude of the effort as that Nation responded: 400,000 Americans in every State of the Union worked their tails off to see Apollo succeed. Or the astonishing success: 24 people voyaged to the Moon, performing the fieldwork, doing the science, and collecting the samples that fundamentally transformed our understanding of the Solar System and the larger Universe around us.

However, even as we celebrate the first lunar landing, we also need to lament the fact that it has been nearly four decades since a human being left low-Earth orbit. The First Age of human lunar exploration only lasted for three years and prematurely ended in 1972. I think that it's abundantly clear by now to all that we never should have stopped going to the Moon; we should have gradually evolved the Saturn-Apollo system to reduce the costs and improve the capability of the Apollo system. Plus, we stopped going right at the point where we had gotten really good at lunar exploration. The cancellation of Apollos 18-20 alone probably cut the scientific return of the project by at least half.

It has been forty years since we last had human explorers on the lunar surface. If you'd told me in 1980 -- with the Shuttles getting ready to fly and low-Earth orbit space operations centers in the works -- that by 2009 there would not be a permanent human presence on the lunar surface (or even on Mars, for that matter), I would have said you were completely, absolutely, inarguably crazy. I try not to think about that too much, because it is really depressing and represents an epic failure on the part of our public policymakers. It is high time to get back in the business of human planetary exploration and development.

The launch of the Lunar Reconnaissance Orbiter represents the first step in the 21st-century exploration and development of the lunar frontier. LRO and the other recent lunar missions, including Chang'E, Kaguya, and Chandrayaan-1, represent the future as we prepare for our Return to the Moon--but since today is Apollo Day, I'm going to discuss some of the enduring lessons of Apollo, and how Apollo data is still impacting our 21st-century exploration of Earth's nearest celestial neighbor.

It's clear that we can help to prevent an Apollo-style premature end to our current explorations by making sure that we do it in an affordable and sustainable way, using in-situ resources to the fullest extent possible to save time and money. The lunar science community has had four decades to study the field observations and samples returned from the Apollo expeditions. One of the major unheralded successes of the Apollo years was the discovery that there are resources on the lunar surface that will enable its eventual settlement by humans.

Although the Moon is thought by many to be a barren wasteland, nothing could be farther from the truth. It turns out that the Moon is full of useful resources, just not in the form we've come to expect on this planet. The lunar science community has a fairly good idea about the best resources to use on the Moon and how to use them; data from LRO and other lunar missions will really help to pin down the best places to send astronauts.

One of the most easily accessible and abundant of these resources are regional lunar pyroclastic deposits, like the one located northwest of the Apollo 17 landing site. These lunar volcanic products are scattered about the lunar surface and can be effectively characterized using remote sensing techniques. New lunar datasets, such as the data expected to be returned by the Lunar Reconnaissance Orbiter Camera and the global hyperspectral data from the M3 instrument on the Chandrayaan spacecraft will be collected over the next several years, and these new datasets will allow lunar scientists to learn more about these economically and scientifically important materials. 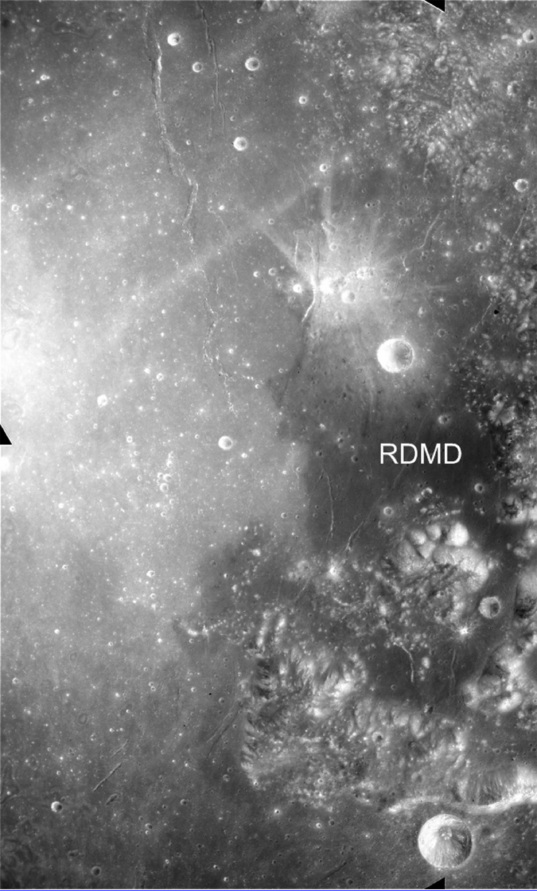 Apollo 15 metric camera mapping photograph showing the Taurus-Littrow region and the large regional pyroclastic deposit located to the northwest of the Apollo 17 landing site. This is the only regional dark mantle deposit that was directly sampled, and it is currently unknown whether its composition is representative of other lunar dark mantling deposits.

What are lunar regional pyroclastic deposits?

Also referred to as dark mantle deposits, these materials are low-albedo deposits that appear to subdue and mantle the underlying terrain much as snowfall tends to soften the landscape. Investigators agree that these materials are of pyroclastic origin and were produced by processes resembling a terrestrial fire-fountaining volcanic eruptions. The largest and possibly most useful of these deposits are called Regional Dark Mantling Deposits. Regional dark mantling deposits are composed of small volcanic beads. Many of these beads are "glassy." When magma cools rapidly (quenched), atoms do not have the time to form orderly structures (minerals) so a glass results. These glasses are actually the most primitive materials in the lunar sample collection and their compositions have given lunar scientists their best insights into the composition of the lunar interior. Therefore, the chemical analyses that would be performed concurrently with the large-scale resource processing of pyroclastic materials will also be uniquely useful for dramatically improving our understanding of both the composition and evolution of the lunar interior and the processes that form rocks on the Moon and the other terrestrial planets. 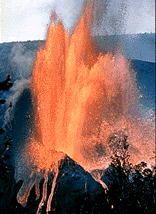 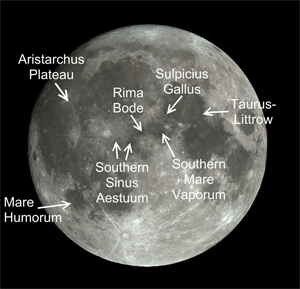 The distribution of regional dark mantling deposits on the near side of the Moon.

Apollo 17 Astronauts Gene Cernan and Harrison Schmitt sampled a regional dark mantling deposit at Taurus-Littrow, but despite forty years of study we simply do not know how representative these samples are of other RDMDs. That's one of the questions that LRO and other robotic lunar scouts are going to answer! 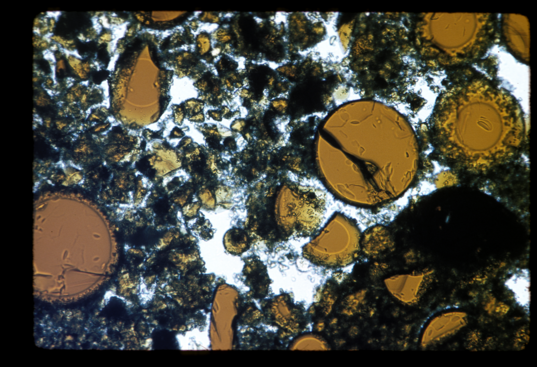 Sample of pyroclastic glasses collected by the Apollo 17 astronauts near Shorty Crater at Taurus-Littrow Base. Both the orange glasses and the partially crystallized black spheres, which are chemically indistinguishable from one another, are visible in the field of view.

How can lunar regional dark mantling deposits be used as a resource? They simply consist of small little spheres of glassy and crystalline material!

That may be so, but lunar pyroclastic deposits have many important properties that make them uniquely useful as resources for future lunar explorers. To put it another way, the Moon is another planet, and ores on the Moon look quite different than ores on Earth. Pyroclastic deposits are fine-grained, well-sorted, and boulder-free (or nearly so) making them easy to mine. Future astronauts won't have to bring expensive and heavy tools for mining solid rock--they can simply scoop up the pyroclastic beads and drop them into a processor conveyor. Such simple procedures will reduce the development time and (more importantly) costs.

The pyroclastic materials sampled by the Apollo astronauts had a nearly uniform grain size. If future lunar exploration shows this to be true at the other regional dark mantling deposits, then these pyroclastic materials can be easily moved and used as cover in order to rapidly provide the necessary radiation and thermal protection for lunar habitats, without needing a lot of processing or heavy equipment.

No less important is the fact that once on the Moon, future lunar explorers also need to breathe. Ilmenite-rich lunar pyroclastic deposits (like the ones sampled at Taurus-Littrow) can be used to produce oxygen, which in turn could be used as life support or rocket fuel. Many different ways to produce oxygen from lunar soils (and especially ilmenite) have been proposed since the end of the Apollo program over forty years ago. Probably the most well-studied of these techniques is called the hot hydrogen reduction process.

Using this procedure, first lunar ilmenite (FeTiO3) is exposed to hot hydrogen. By hot, we mean really hot: the hydrogen gas would have to be around 1000 degrees C or so! This reaction produces iron, titanium, and water, which are all economically useful materials. The water is then electrolyzed into H2 and O2, and the hydrogen can be recycled to be used again. Hydrogen is a common rocket fuel and could easily be provided (or, better yet, locally generated) at a lunar outpost with the appropriate infrastructure.

A sustained human presence on the Moon will eventually require other resources besides radiation shields and oxygen, though, and the more materials we can derive locally on the lunar surface, the better. Fortunately, there are more resources that can be extracted from lunar dark mantling materials, including H, He, He-3, N, C, and other noble gases, which provide important life support materials as well as agricultural nutrients for a lunar outpost. These important elements have actually been implanted in lunar pyroclastic materials by the solar wind, and can be easily extracted by simply heating pyroclastic materials.

Similarly, studies of lunar volcanic glasses returned by the Apollo missions also revealed that there are thin layers of economically important elements like Zn, Pb, Cu, K, Na, Cl, and Ga coating the grain surfaces of pyroclastic glasses. Again, these elements could be extracted through simple heating and are therefore one of the most accessible currently-known lunar ores. The data from the next generation of lunar robotic scout missions might let lunar scientists identify any large concentrations of pyroclastic glasses coated with these elements from orbit, which will be extremely useful to guide future lunar exploration and development.

To be sure, there's still a lot of work to do before we can start doing large-scale resource processing on the Moon. We need to design hardware and test equipment on the lunar surface, then gradually build up our experience base with local resource production. In the early stages of our return to the Moon, in fact, one of the key objectives for astronauts will be to test different methods and machinery for resource extraction. There are lots of ways to extract resources from the Moon, and we need to figure out which tactics produce the best results. It will take some trial-and-effort, to be sure, but the results will be most definitely worth it.

But, thanks to Apollo, we do know that the Moon is the perfect place for humanity to learn how to productively and affordably live off-world. Much like the Polynesian seafarers who colonized the Pacific basin, the next generation of lunar spacefarers will eventually live off the land using lunar pyroclastic deposits and other resources, making lunar outposts more self-sufficient and cost-effective. The data returned by forthcoming robotic scout missions like the Lunar Reconnaissance Orbiter will pave the way to a better understanding of the Moon's resources while letting today's engineers continue to build on the knowledge gleaned from the Apollo program. 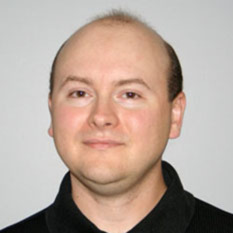