To the Moon, Alice?

Lots of people will be reminiscing this week about the events of July, 1969, when a daring trio of astronauts risked it all to capture the world's attention and make the dreams of a fallen President, and a rudderless nation, a reality. Forty years ago NASA achieved the impossible, and humans walked on another world. The magnitude of the achievement has not weakened with the passage of time. Centuries from now, the voyage of Apollo 11 may very well be one of the few things that school kids will be expected to know about the 20th century. With all this nostalgia in the air, it's tempting to wonder if Apollo 11 and the five other Moon landings that followed between 1969 and 1972 were the apex of our trajectory as a spacefaring species. Are we destined to celebrate only our past glory days of reaching for and touching the stars? 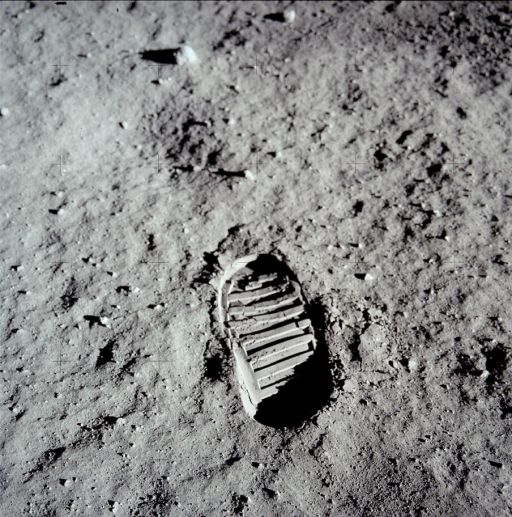 Astronaut Buzz Aldrin's bootprint on the lunar surface.
No way. For one thing, human exploration of our solar system hasn't stood still over the past 40 years. Rather, we've been busy exploring the Cosmos virtually rather than in person, through the lenses of space-based telescopes like Hubble and through the eyes of our robotic emissaries, like the Mars rovers Spirit and Opportunity. The "humans versus robots" argument for space exploration has proven to be based on a false premise: robots aren't exploring the solar system for us -- humans are exploring the solar system using robotics. We are there -- on Mars, orbiting Saturn and landing on its large moon Titan, flying past the planet Mercury, and even orbiting above the Moon again, taking photos and other measurements far superior to what the Apollo astronauts were able to do from orbit. These missions of exploration have been playing out every day for the past 40 years; Neil and Buzz were the vanguard for an armada of thousands of fellow space explorers who have, if only virtually, followed in their boot prints. 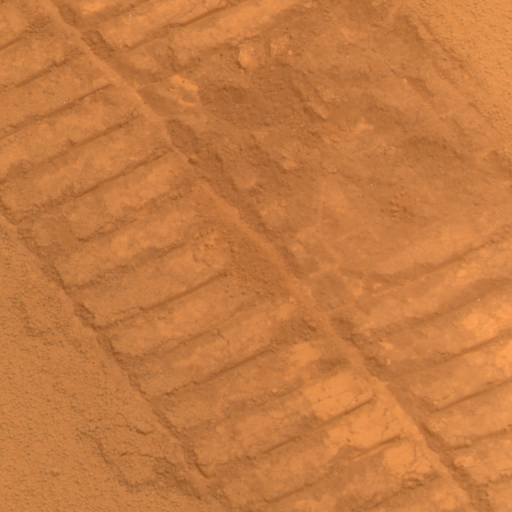 Opportunity used its panoramic camera (Pancam) to take this image of its tracks on Sol 1804. Some areas are clearly perfect for the rover's long drive south-southwest to the big crater the team calls Endeavour.
When critics or politicians wonder aloud if we should return to the Moon they're missing the point. We're already there. Four different nations have mounted virtual lunar exploration missions over the past few years alone, and the people running those missions have collected new scientific and engineering data about our celestial neighbor that paves the way for more future human exploration missions, be they virtual or real. Seeing the stunning pictures taken last week by NASA's Lunar Reconnaissance Orbiter of the Apollo landing sites, showing the astronauts' abandoned landers and other equipment, felt somewhat like seeing the Titanic again for the first time, or finding the last encampment of Scott and his men in the Antarctic. Something incredible, historic, and -- happily -- not tragic, happened there. We want to go back and discover the place anew. 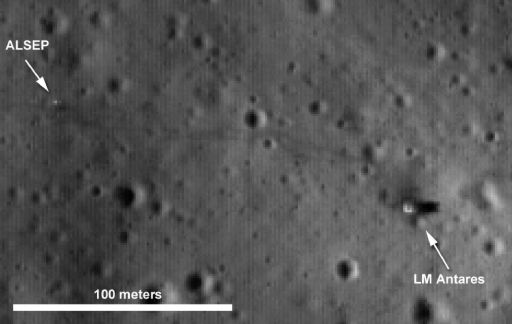 Lunar Reconnaissance Orbiter Camera (LROC) image of the Apollo 14 landing site, showing the lunar module (LM) and the Apollo Lunar Surface Experiment Package (ALSEP), instruments which were deployed by the astronauts. Tracks left by the astronauts over 38 years ago can be seen running between the two.

Check out Remembering Apollo 11
Special Coverage from The Planetary Society

uman exploration using the tools of robotics is scientifically valuable and highly economical for initial reconnaissance and characterization of the worlds around us. How large is that asteroid? How much ice is coming off that comet? How many rocks are over on that hill? These kinds of basic "scouting" kinds of questions can be well addressed by robotic missions like rovers and orbiters. For centuries, explorers (and armies) have realized the value of advance scouts. Modern technology has obviated the need for those scouts to be human. We've figured out how to learn about new worlds and even to emotionally experience the discoveries through robotic vanguards, at a fraction of the cost or risk of sending people there.

Our exploration of the solar system cannot continue indefinitely to be exclusively in the virtual, robotic mode, however. The advantages and efficiencies of robotic exploration dwindle as the scientific and technological needs of explorers advance from the strategic to the tactical. The next level of critical questions beyond basic characterization are much deeper: Where did that asteroid come from? Are the materials deep inside that comet the same kinds of water and organic molecules that seeded the early Earth? How did that hill form, and what are the implications for the past history of the planet? Is there life out there? These are logical, next-step kinds of questions that scientists and explorers are starting to ask, and the deepest questions are already about places like Mars and the Moon, where our robotic vanguard has already allowed us to understand many of the basic facts. Answering -- or at least trying to answer -- these kinds of Big Questions requires judgment, intuition, creativity, field experience, and a broad grasp of context, among other things. It is not yet possible to program these kinds of skills into robots, and indeed it may never be possible to do so. We know of only one system programmed to think like that: the human brain.

If we are serious about continuing to be a species of explorers -- and who could deny that? -- then it is inevitable that while we will always need robotic scouts, people must eventually follow in their tracks. Asking if people will go back to the Moon, or visit the asteroids, or travel to Mars and beyond, is academic. We will, and we must, or else we'll stop seeking answers to the Big Questions. We'd stop being explorers. We'd stop being human. To the Moon, Alice? You betcha -- it's in our genes. 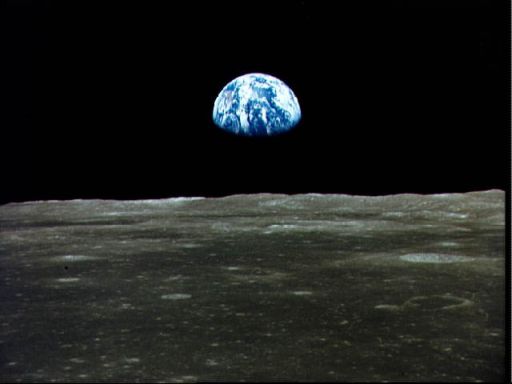 July 16, 1969 - This view of the Earth rising over the Moon's horizon was taken from the Apollo 11 spacecraft. The lunar terrain pictured is in the area of Smuth's Sea on the nearside. Coordinates of the center of the terrain are 85 degrees east longitude and 3 degrees north latitude.
Jim Bell is an astronomer and planetary scientist at Cornell University, and is the leader of the color camera team for the Mars rovers Spirit and Opportunity and President of The Planetary Society. His recent books include "Postcards from Mars," "Mars 3-D," and "Moon 3-D."