Chang'e 4: Why the Moon's far side looks red in new images

The first ever images taken from the surface of the far side of the moon have been released following the Chinese National Space Administration’s (CNSA) successful landing there. The lander Chang'e 4 and rover Yutu 2 follow from Chang'e 3 and the original Yutu rover that were deployed on the moon’s near side in 2013.

But if you’ve been looking closely at the pictures, you could be forgiven for thinking that the far side of the moon is red. That’s how it looks on the unprocessed pictures – and it’s different from other pictures of the moon, in which it appears grey. So what is going on?

Cameras on spacecraft often don’t see colours in the same way as the human eye. For example, the red, green and blue components are usually recorded separately. This was the case with the latest images, and no colour correction has been applied to take account of the different sensitivities of each set of the camera’s colour detectors.

The first picture below is an example of one such “raw” image, and I’ve accompanied it with histograms of the red, green and blue channels to show how brightness is distributed in each. In the raw version, the lunar surface looks red because the detectors used were more sensitive to red than they were to blue or green. So although in truth the surface is almost equally bright in all three colours, the green and blue detectors have been set up so as to be less sensitive to light than the red detectors. This is why the green and blue histograms do not extend to the bright end of the range of their scale. 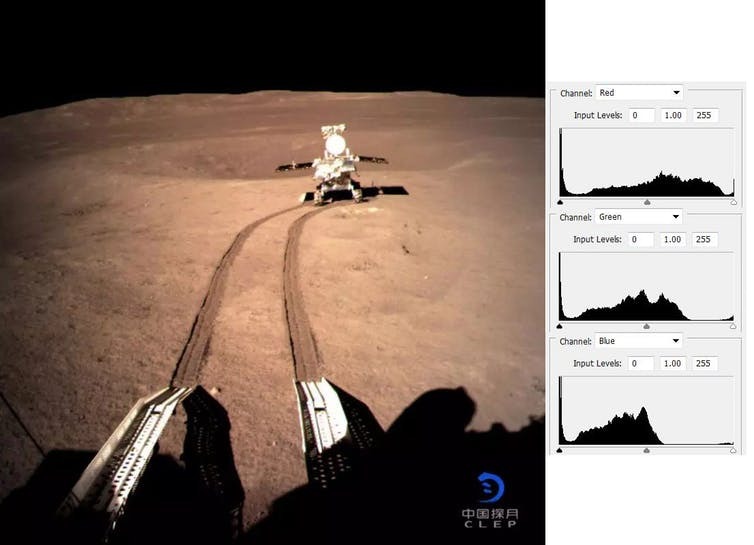 Raw Change'4 image, showing the Yutu 2 rover. Histograms of the red, green and blue channels are shown on the right.

It is a simple matter to adjust the image to make it look more reasonable. In the next picture I have merely stretched the green and blue channels to make the bright ends of each histogram coincide more closely. 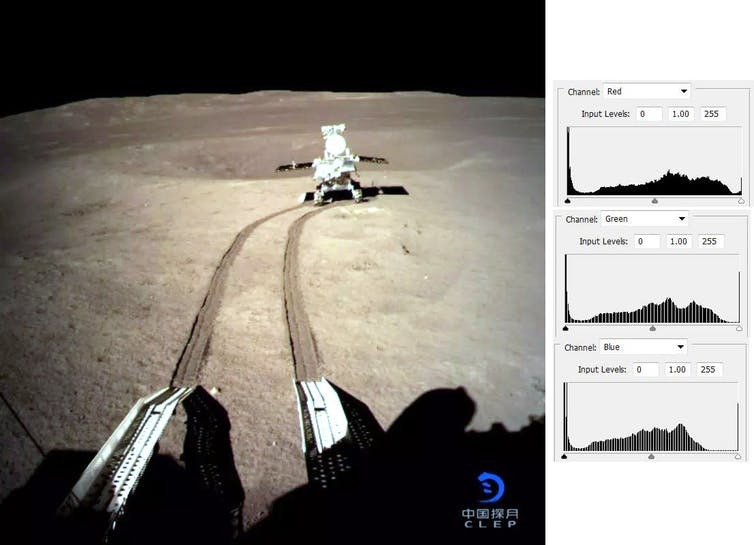 A more realistic view. The same image as before after stretching the green and blue channels.

I could have gone further, and given the surface an even bluer cast. In fact, there has been a busy discussion on Twitter about the best approach. There are certainly technically more adept approaches than mine, but all are agreed that the unadjusted colour is misleading.

So how can we be sure of the colour on the moon? When the Apollo astronauts took their colour photographs (and in those days it was photography, using colour film, rather than digital imaging like today), they placed a colour calibration target containing patches of known colour in the field of view. This made it possible to get the colour balance right during developing and printing. When Jack Schmitt of Apollo 17 found some “orange soil” on the otherwise grey surface, its genuine orange nature could be confirmed by comparison with the colours on the calibration strip. 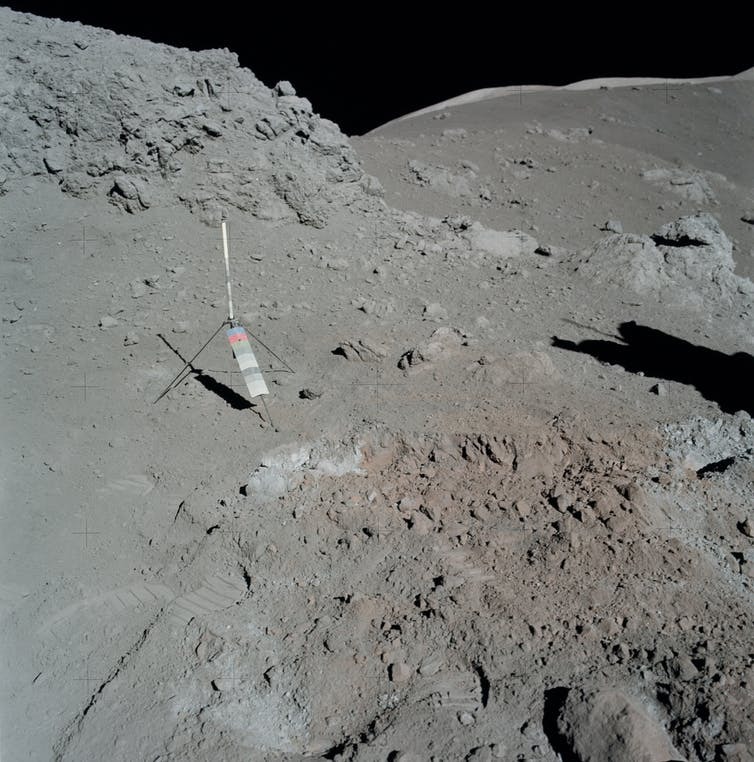 Orange soil photographed by an Apollo 17 astronaut. This is as colourful as the moon gets. Note the colour calibration target.

However, the images from the Chang'e 4 lander and the Yutu 2 rover are primarily for navigation purposes, for which getting the colour right scarcely matters.

There is some useful science in measuring how well the rocks and minerals on an extraterrestrial surface reflect light of different colours, and the Yutu 2 rover carries a “visible and near infrared spectrometer” designed to do just this so we can learn more about the surface composition.

It is already known that the moon’s average surface is a slightly reddish version of dark grey, though less red than the planet Mercury and much less red than Mars, whose surface is genuinely red as a result of oxidation of iron minerals (essentially rust).

Knowing how the moon’s surface reflects light of different colours is only one aspect of presenting an image of a lunar landscape so that it looks right. Maybe you recall the dress colour illusion that went viral in 2015. This was an image of a dress which some people believed was black and blue while others were confident it was white and gold.

It demonstrates that colour perception is subjective, and also depends on context. How you see colours in the images in this article for example will also depend on the characteristics of the device on which you are reading it.

However, measurements show that there is very little colour variation on the moon, and astronauts who have been there will all tell you that the moon is essentially drab grey (partly explaining the excitement when a layer of orange soil was spotted). When the first Chinese astronaut walks on the moon – probably sometime in the 2020s – they will most likely experience the same thing.

This article is republished from The Conversation under a Creative Commons license. Read the original article. 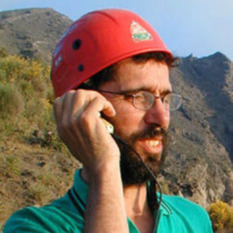 quote: "However, measurements show that there is very little colour variation on the moon, and astronauts who have been there will all tell you that the moon is essentially drab grey (partly explaining the excitement when a layer of orange soil was spotted). When the first Chinese astronaut walks on the moon – probably sometime in the 2020s – they will most likely experience the same thing." That last phrase should be a wake-up signal to the Nasa, unless they're planning on orbiting the Moon in LHO and leaving the lunar surface to others. Noting how colorful places tend to be in the outer solar system, it may be that direct sunlight makes colors fade as they do on Earth. If so, color may be found inside lava tubes, in canyons and in the shadowed areas on the South pole. With valuable water on the South pole, that is the place China may want to stake its claims, so we may have colorful photos in the 2020's...

Though maybe not true in this case, many color images are produced from one or more components outside the visible color spectrum, e.g. near infrared or ultraviolet, which are substituted for one or more of the red/green/blue components which mimic human vision. I find it helpful when a spectral diagram is included that shows the amplitude and frequency band of each component of the combined "artificial" color image.