The March Equinox 2018 issue of The Planetary Report is here!

The March Equinox 2018 issue of The Planetary Report has mailed and Planetary Society members can download their digital copy here.

In less than 25 years, we Earthlings have gone from wondering if any planets orbit other stars, to finding more than 3,700 confirmed exoplanets in our galactic neighborhood alone. And the discoveries just keep coming.

But knowing how plentiful these alien worlds are—and seeing that any of them are hospitable to life as we recognize it—are different things. Enter the Mars Atmosphere and Volatile EvolutioN (MAVEN) mission now orbiting the Red Planet.

Scientists will use MAVEN data to determine the role the loss of volatiles from Mars’ atmosphere to space has played over time, giving insight into the history of this cold, dry planet’s atmosphere, as well as its climate, liquid water, and potential habitability. MAVEN’s Bruce Jakosky and David Brain tell us more. 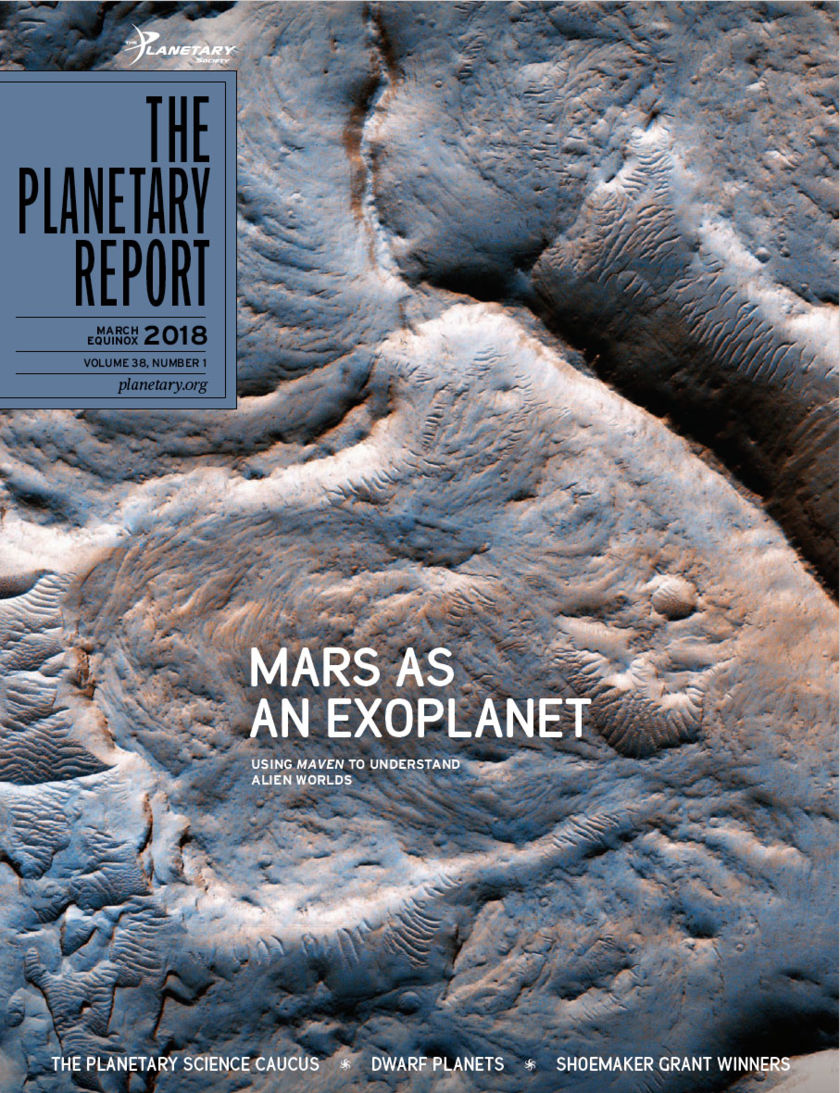 The outer solar system, that realm beyond Neptune’s orbit and the Kuiper Belt, remains relatively unexplored. Knowing more about the icy bodies that dwell there can tell us much about the early history of the solar system and the outward migration of outer plants. Michele Bannister and her Outer Solar Systems Origins Survey (OSSOS) teammates have found hundreds of trans-Neptunian objects (TNOs) whose eccentric orbits will tell us more about the far reaches of our planetary neighborhood.

We are thrilled to announce another round of Shoemaker Near-Earth Object Grant winners. These very advanced amateur astronomers are doing the critically important work of finding, tracking, and characterizing near-Earth asteroids—one of which may someday have Earth in its sights. Bruce Betts introduces the winners. Bruce also updates us on PlanetVac, a reliable and low-cost system for gathering surface samples, currently in development at Honeybee Robotics.

The Planetary Society now has the support of an organized, bi-partisan caucus in the United States Congress! In this issue, U.S. Representatives John Culberson and Derek Kilmer explain why they created the Planetary Science Caucus and how it will advance space exploration.

Plus, Kate Howells salutes our volunteers in Washington, D.C., we share some of your inspirational space haiku, and Bill Nye celebrates the ways we’re moving space science forward.

Those last few words are key to everything we do at The Planetary Society. Our whole reason for being is to help keep moving space science and exploration forward—and to involve you in it!

If you’re not a part of it yet, and you want to be, you can easily join us here.

Thank you and happy reading,