Mars today is a dynamic place. One visually dramatic sign of change on Mars is "mass wasting," more commonly known as "stuff falling downhill". Mass wasting is a broad term covering all the different processes by which gravity moves sediment (sand, regolith, rocks) down slopes. Some well-known examples are gullies and recurring slope lineae (RSL). As we seek to better understand mass wasting on Mars, some scientists are heading into the laboratory to answer their questions. They presented their work at the 49th Lunar and Planetary Science Conference in The Woodlands, Texas last week. 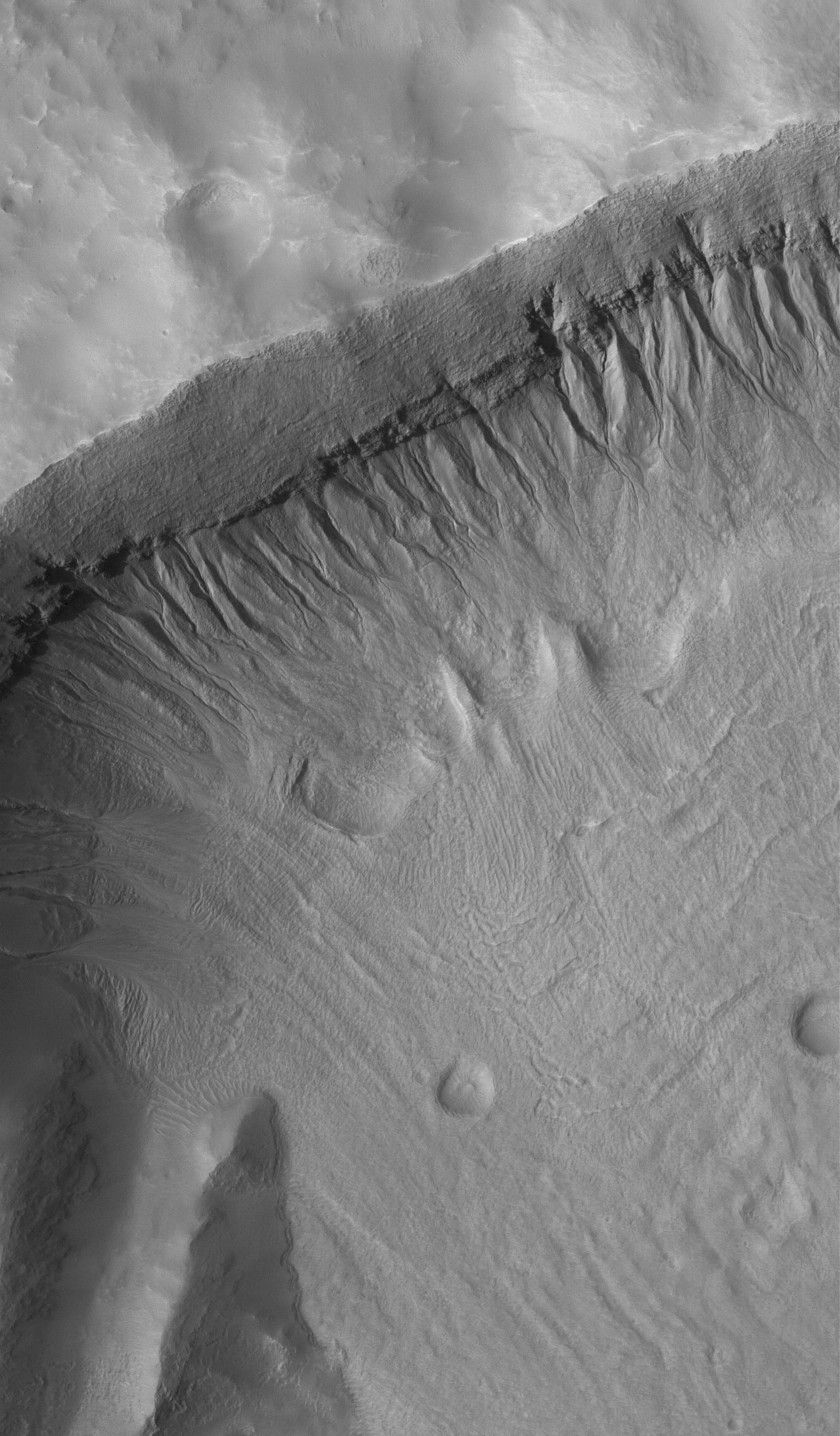 Linear gullies are one form of mass wasting on Mars that have no Earth analog and are therefore challenging to study. In 2013, Serina Diniega and her coauthors suggested that these gullies could form during seasonal spring warming. The warming destabilizes blocks of dry ice (frozen carbon dioxide). These blocks might break off higher rims and slide downslope, carving uniform streaks. The process by which this happens is fascinating; as the dry ice touches the warmer surface materials, it sublimates (turns into gas), creating a gaseous layer underneath the block that lubricates its motion, allowing the block to slide. Like a Martian air hockey puck, the block levitates and carves a long streak downslope, ending in a pit as it ultimately comes to rest and burrows into the sediment. And while Diniega and her colleagues have been able to recreate the process here on Earth, it had yet to be properly tested in Martian conditions. To do that, scientists need special equipment.

To simulate a Martian environment, scientists used the Large Mars Simulation Chamber. It’s at the Open University in Milton Keynes, UK. At nearly a meter wide and two meters long, it’s large enough to hold a “small human”, as Lauren Mc Keown, a doctoral student from Trinity College in Dublin put it. Inside the chamber, users can create an environment with temperatures as low as -70C, pressures as low as 6 millibars, and an atmospheric composition primarily of carbon dioxide and nitrogen. 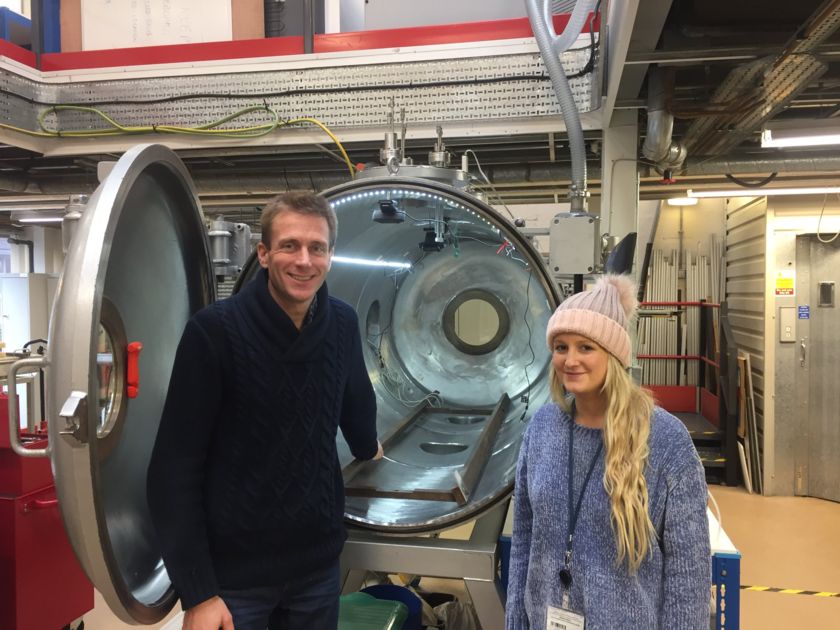 The Large Mars Simulation Chamber at the Open University with Jim McElwaine and Lauren Mc Keown.

Mc Keown has been experimenting with dry ice blocks and their interactions with different grain sizes since 2015. Last year, she demonstrated these interactions by using dry ice blocks in an Earth-like environment. The results were quite fascinating and sometimes violent; the blocks easily burrowed into the grains and created many features observed to happen on Mars, including pits, levées, and jets. Using this data, Mc Keown created a model to predict what would happen on Mars.

This year, Mc Keown took the next step and used the Large Mars Chamber to reproduce her experiment in Martian conditions. She adjusted temperatures to 293 K (approximately 20C, or room temperature), which simulates the surface on a warm spring day. She altered pressures and atmospheric composition to closely match Mars. Finally, she gently lowered a 20 x 10 x 2 cm block of dry ice on to three different beds of grains (250–425 micrometers, 425– 600 micrometers and 600–850 micrometers in size, which are in the medium to coarse sand size range).

Mc Keown’s results very closely matched the modelling developed with her Earth-analog experiments. It suggests that this method of gully formation is viable on Mars. It’s another step closer to explaining linear gullies and why they end in pits. 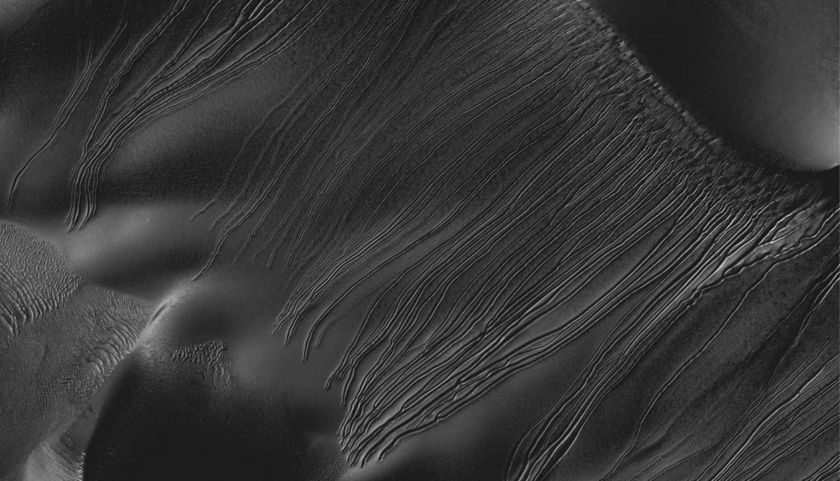 Some of the longest linear gullies on Mars are in Russell Crater, extending more than a kilometer in length. From PSP_001440_1255.

A new way to look at Recurring Slope Lineae

Since their discovery in 2011, recurring slope lineae (RSL) have been one of the most hotly debated features on Mars. These dark seasonal streaks appear on the slopes of crater walls and have yet to be definitively explained. In 2015, Lujendra Ojha and coauthors concluded that the streaks could be formed by briny water melting in the warmer seasons. With enough perchlorates mixed into the sediments, it was possible that liquid water could persist even under Martian conditions.

This conclusion was challenged just last year when Colin Dundas and coauthors argued that RSL were only occurring on particularly steep slopes (slopes greater than 27 degrees). Further, as these slopes level off near the bottom and reach a “dynamic angle of repose”, the RSL streaks stop. Both these angles correlate very closely with our understanding of dry flows, suggesting that RSL are not wet like we previously thought.

Here at the Lunar and Planetary Science conference, Jan Raack from the Open University presented some new experimental data that might help explain. Similar to Mc Keown’s work with dry blocks, Raack suggests that boiling of water could create a cushion of air underneath the sediment. This levitation effect could result in a huge increase in the amount of sediment that flows in the presence of water.

To test it, Raack created a 90-by-40-by-50-centimeter sediment bed inside the same Large Mars Chamber, and inclined it at 25 degrees. He set pressure to 9 millibars. Then, he introduced water at the top of the sediment to examine how much it could displace downslope. He conducted the test under two distinct temperatures, once cooling the sediment to 278 K and once to 297 K. These temperatures are important because they represent the surface temperature differences from winter to summer.

The results were remarkable. In the cold environment, the sediment flow was small, and lines up well with what we would expect here on Earth under terrestrial pressures. In this test, water carried most of the sediment flow along with it. However, in the warm environment, which would simulate the surface of Mars as the sun bathes it in the spring and summer, the flow dramatically increased. Water carried some of the sediment overland. It carried even more downslope through a process called percolation. Additionally, it beaded some sediment into pellets that tumbled downward. Finally, the water triggered dry avalanches resulting in even more flow. The warm test resulted in 9 times as much sediment flow as the cold test. Raack estimates that Martian gravity would enhance the levitation effect, resulting in nearly 48 times as much sediment flow. 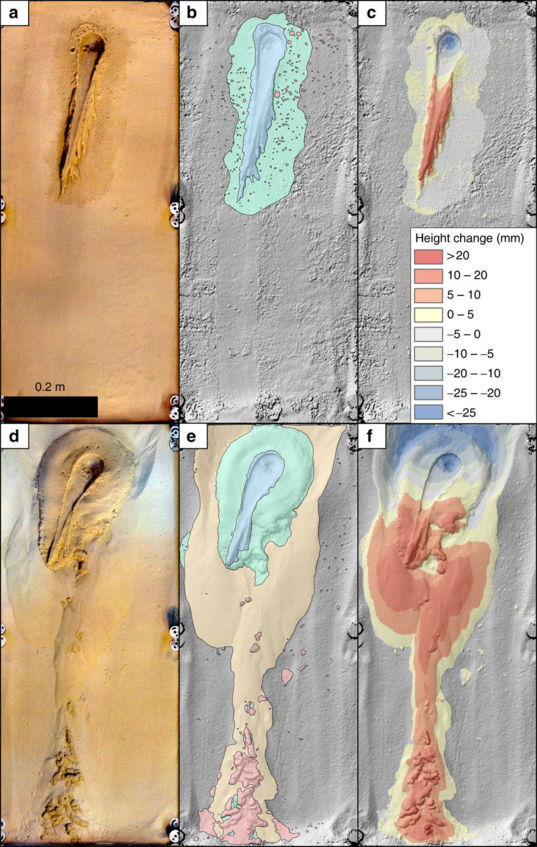 This experiment suggests that a much smaller amount of water would be necessary to create RSL than previously thought, lending credence to the hypothesis that RSL could be wet streaks. But it also helps explain why RSL might have correlation with dry flows, since warm conditions can allow water to initiate them.

During the Martian winter, carbon dioxide from the atmosphere condenses on to the surface as frost. In the spring and summer, this dry ice sublimates back into a gas. This sublimation may be causing different features like gullies to grow each year. However, it’s not well understood how this frost sublimation causes such mass wasting.

Matthew Sylvest from the Open University has been performing experiments in the Mars Simulation Chamber to better understand this process. The team’s work was presented by Susan Conway at LPSC. They created artificial slopes of varying angles between 10 and 30 degrees using a number of different grain sizes, including a coarse sand, a fine sand, and JSC-1 Mars regolith simulant. By cooling the chamber and filling it with CO2, they created a layer of frost on the slopes.

Next, the team warmed the surface with radiant heat to begin sublimating the frost and observed the results. They noticed significant mass wasting through two specific movement types. The first was a discrete flow, which is when the sediment behaves like a fluid and simply flows down the slope. The other was creep, which is a much slower flow where small movements displace the grains in the same direction downslope. The JSC-1 simulant was by far the most active, but the fine and coarse grained materials also displayed mass wasting.

The team observed that the carbon dioxide froze not just on the surface but below it. When it sublimates, it creates outward pressure which lifts the grains upwards and triggers movement. It helps us better understand how a simple freeze-thaw cycle can have a dramatic effect on the landscape of Mars.

It’s great to see such a strong showing of experimental geomorphology at the Lunar and Planetary Science Conference. Planetary science is challenging by nature of it being conducted remotely. Leveraging laboratory environments allows us not only to solve some outstanding problems, but also gives us a sense of connectedness with the work by being able to see it up close and personal. 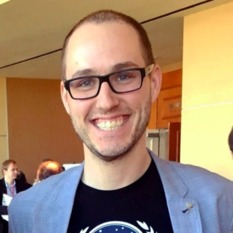 That is some interesting study you both did! Have you looked at the Martian south pole terrain? There is really weird stuff going on down there. Some ice cap terrain types have been dubbed "Swiss Cheese" by your colleagues. The south polar region weather is unique to our entire planetary system. Thanks for the article!

From what I've seen at the south pole, I was wondering if you had or could collaborate with Candace Hansen's team (Planet Four dot org) and demonstrate fan and blotch creations to verify what they have indicated is the process for these fans and blotches. The process is understood so being able to duplicate it would be awesome support for their research, not to mention actually seeing it happen. TPS1BCW

Hey Bob! I actually did a whole podcast interview with Michael Aye from Candy's Planet Four team on the South Pole terrain you might enjoy! Thanks for reading. www.wemartians.com/episode004

Hi Jake, Thanks for the response! I'll check the site. I'm listing now. Thanks again!

Hi Jake, That was a very interesting podcast with Michael! So much more has been done and learned since then, as expected! Thanks again. Cheers!