The Jovian system is a busy place: Jupiter has a very strong magnetic field, a faint ring system and over 60 rocky moons orbiting around it. The largest of these - Europa, Io, Callisto, and Ganymede – are called the Galilean satellites after their discoverer. The "Groovy Galilean Satellites" session at last week's Lunar and Planetary Science Conference (LPSC) covered the moons from a wide range of angles: analysis of past mission data, testable hypotheses for future missions, and discussion of the use of ground-based data. The majority of talks were specific to Europa, the poster child of the outer solar system, which has everyone very excited about its global subsurface ocean and upcoming visit from the Europa Clipper mission. Without further ado, let’s dive in!

David Senske kicked off the session presenting a comprehensive geologic map of Europa [Abstract 1340]. This super mosaic categorizes the surface of Europa into different types of surfaces: craters, chaos, bands and ridged plains. Europa has few craters, suggesting that the surface is relatively young in geologic terms (40 to 90 million years old). Chaos regions are disordered surface features and they occur all over the moon. Europa is also covered in bands that form wide arcs striping the surface, with the remainder being comprised of ridged plain regions. Ridged plains and chaos are the most abundant features making up over 90% of the surface. This work will serve as a useful reference for future exploration of Europa. 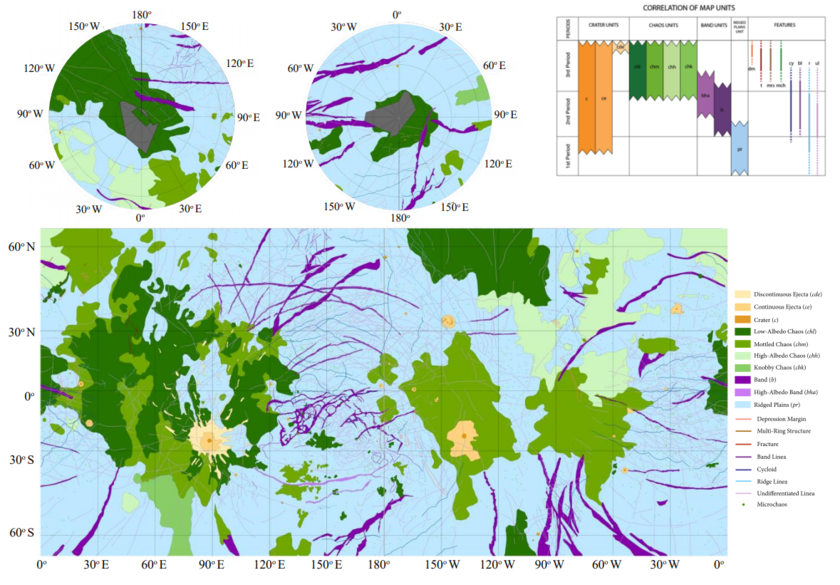 This geologic map of Europa was created by stitching together more than 100 images from the Voyager and Galileo spacecraft, then manually identifying key features.

Other speakers also explored the surface of Europa in exquisite detail. Large cracks and ridges span the surface, largely from the tidal forces exerted on it by Jupiter. We can see evidence that the surface has been stretched and pulled apart in places. Geoff Collins examined images from the Galileo mission and tried to put back together the jigsaw puzzle [Abstract 2493]. Collins mapped out these rigid plates and then reversed their deformations, lining up the plates as they would have been before the movement. Plate motions appear not to have happened at the same time, since the bands in one area cut through all those in another. Although this wasn’t possible to reconstruct in all regions, Collins found that all plate motion in the Belus region predates all plate motion in the neighbouring Castalia region. This implies that the timing of plate motions is not globally uniform. We don’t know if the surface is still active, but it appears that surface activity has declined over time.

Phaidra Linea and other, similar bands on Europa can be reconstructed to reunite geologic features, demonstrating that these kinds of bands are "pull-apart" boundaries, where the surface has fractured, opened up, and new crust formed.

Multiple speakers presented work in preparation for the Europa Clipper mission. Planned to launch in 2025, this spacecraft will for 42 flybys of Europa to investigate its habitability. The mission objectives are to characterize the ice shell and any subsurface water, understand the habitability of Europa's ocean, and to understand the formation of surface features.

Bill KcKinnon presented a thermodynamic model that links geophysics to habitability. The aim of this research is to understand how sensitive the ocean composition is to different formation conditions. While these conditions are not known for Europa, the plan is to develop testable hypotheses for Europa Clipper [Abstract 1707]. Andrew Dombard discussed the potential habitability of Europa, the primary goal of the Clipper mission [Abstract 1593]. For life to occur we need three things: (1) liquid solvent, (2) proper chemical systems, and (3) metabolic energy source. We know that Europa has a global subsurface ocean (from its induced magnetic field) but the answers to (2) and (3) are unknown. The probability of habitability skyrockets if Europa has volcanism at the bottom of the ocean. On Europa the biggest density contrast is at the rock-ocean interface and we can therefore use gravity anomalies to look for heat flow as a proxy for volcanism. Dombard was keen to point out that we must be cautious with these results. High heat flow is not necessarily indicative of volcanism (and extrapolating even further, evidence for life).

The focus on the Galilean satellites will only increase in the future as we send more spacecraft to explore. In addition to the Europa Clipper mission, the European Space Agency has its own mission planned. The Jupiter icy moons explorer (JUICE) plans to launch in 2022 and will spend at least three years making observations of Jupiter and three of the Galilean moons, Ganymede, Callisto and Europa.

However, as Julie Rathbun enthusiastically pointed out, we don’t need to wait for the next mission to make scientific progress. Ground-based observations are great for getting data covering long time periods; they can observe bright transient outbursts (such as the volcanoes on Io); and they help to put spacecraft data into context. Rathbun uses ground-based observations of Io to understand how the intensity of Io’s volcanoes changes over time. [Abstract 2208].  Julie introduced the planetary scientists in the audience to astronomer ‘tricks of the trade’ and has developed tools that help to use this data effectively.

Katherine de Kleer followed up with a summary of observations using the Atacama Large Millimeter Array (ALMA) observatory that probes the top few centimeters of the Galilean moon surfaces [Abstract 2567]. In her global maps of Europa, Callisto and Ganymede, the color gradient represents the surface temperature – blue means colder and therefore, presumably a more reflectively surface (higher albedo). When compared with albedo models de Kleer finds that one cold region in the northern hemisphere of Europa is too cold to be accounted for by just the albedo. This cold feature doesn’t match to any known geologic feature, suggesting a different thermal inertia at this point. The geologic map presented at the start of the session will be a useful reference to check against!

The Groovy Galilean moons will no doubt be a source of great new science for years to come. If you want to read more, check out the list of talks and the session abstracts.

Thank you to Emily Lakdawalla and Sierra Ferguson for note sharing. Thank you also to the Stanbacks and my advisers, Mike Brown and Andy Ingersoll, for supporting my attendance at LPSC 2018. 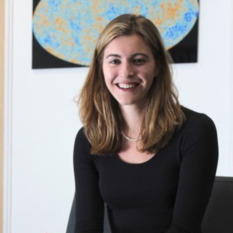 Hi Harriet, Thanks for this blog! It is a great start for the coming JUICE mission and others sure to follow. I hope you can follow on with update blogs as progression occurs. Andy Ingersoll ... I remember his name from the Voyager Grand Tour days (Jupiter) and an article he did in SciAm (Scientific American) years back. I thought he'd be long retired after all of this time!