The Juno spacecraft that is currently orbiting Jupiter has obtained the first good images of Jupiter's polar regions. However, due to both its orbit and the way its camera works it can't obtain complete high resolution coverage of Jupiter at all latitudes and longitudes. This is not an accident; earlier flyby spacecraft like Cassini and Voyager were able to image all of Jupiter with the exception of the polar areas, so Juno's polar images fill a gap. I am presenting here a combined global map of Jupiter, made from a Cassini map I made for the equatorial and temperate regions and polar maps made from the Juno JunoCam and JIRAM polar images. This should remain the highest resolution global map that can be assembled of Jupiter for some time. 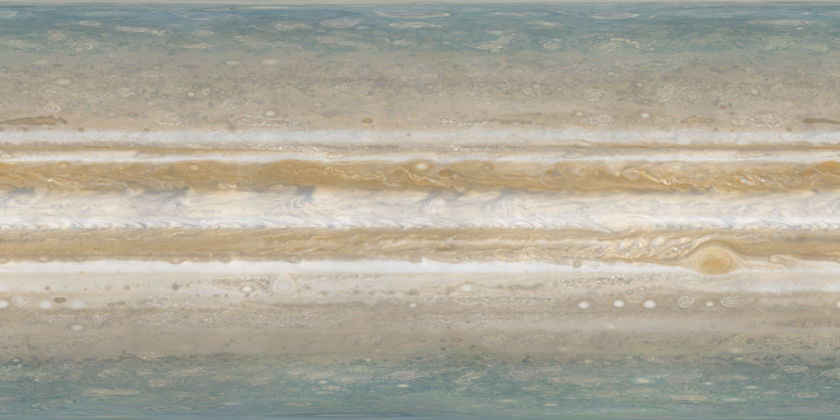 A global map of Jupiter in equirectangular projection, suitable for wrapping onto globes in 3D visualization software. It updates the Cassini map of Jupiter with JunoCam images of Jupiter's poles, so is a better product for simulating views of Jupiter from above and below the equatorial plane.

Of course, this map is a fiction. Jupiter's appearance changes greatly with time. Cassini flew by Jupiter years ago (the flyby was in December 2000), and the Juno polar images come from two different cameras capturing images taken on several flybys on different dates. Despite this, a composite map like this one gives a more realistic view than a Cassini-only map. Cassini didn't image the poles at all, whereas the appearance of the poles in the Juno images is likely to be rather typical. Therefore a Cassini map that includes Juno polar data is more realistic than using smooth and featureless dummy data for the poles as I did in the original Cassini map.

Combining polar maps made from Juno data with a global map from Cassini data that I made back in 2005 resulted in a 14400 x 7200 pixel map (40 pixels per degree) in simple cylindrical projection. The original Cassini map was only 7560 x 3780 pixels but I didn't want to reduce the resolution of the Juno data and therefore decided to oversample the Cassini data. I also made minor improvements to the Cassini map before combining it with the Juno polar maps. In particular, I improved the color balance slightly.

The original Cassini map was made from roughly 100 images obtained by the Cassini spacecraft at the end of December 2000 from a distance of a little under 10 million km. These images have a resolution of roughly 65 km/pixel. To match this (and in fact slightly oversampling the data) the original Cassini map had a size of 7560x3780 pixels (21 pixels per degree) but as noted above I enlarged it to preserve the resolution of the Juno polar data.

The Cassini images I used are from a series of 3x2 image mosaics obtained using two color filters, blue (BL1) and a near-infrared filter (CB2). Therefore I had to create synthetic green images and I also had to modify the CB2 images to make them more similar to red images. Using true color images obtained by Cassini earlier and from a larger distance as a guide I was able to assemble an approximately true color map from this data.

I'm hoping that future missions like the European Space Agency's JUICE mission (or possibly NASA's Europa Clipper mission) will be able to obtain higher resolution longitudinal color coverage of Jupiter, thus enabling an even better map to be made.

Hi BJorn, this images work was very nicely done! Thanks for posting it!