It is easy to forget that JunoCam isn't the only instrument aboard Juno that can obtain images. The Jovian Infrared Auroral Mapper (JIRAM) instrument can obtain images in two infrared bands. One of these, centered at a wavelength of 4.78 microns, shows thermal radiation emitted from Jupiter. This radiation is caused by heat from Jupiter's warm interior. There is no difference between the dayside and nightside in these images. JIRAM's images are great for looking at Jupiter's north pole, which isn't visible in the JunoCam images because it is currently winter in Jupiter's northern hemisphere. 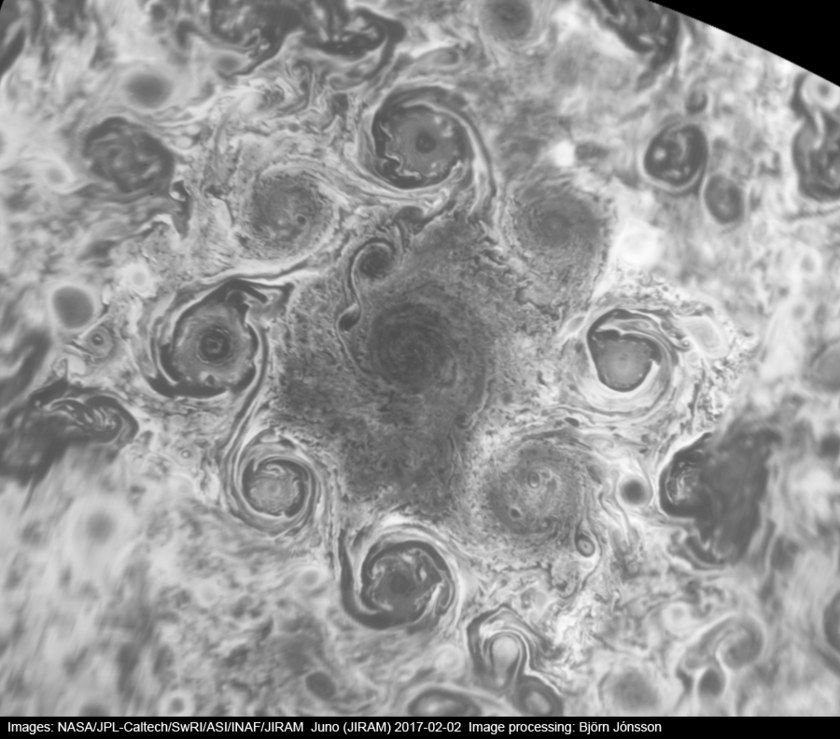 JIRAM is an infrared imager on Juno that detects heat radiation emitted by the planet. High-altitude clouds can block this heat, so appear dark. This view of Jupiter's north pole was captured on February 2, 2017.

Each time Juno passes over Jupiter's poles, JIRAM obtains brief time-lapse observations of cloud motions. Here is a tweened time-lapse created from three JIRAM image mosaics obtained over an interval of slightly less than three hours shortly before perijove 4 on February 2, 2017. Because Juno was approaching Jupiter the image sharpness increases from start to finish. If you are unable to play the MP4 file, the time-lapse can also be viewed at Vimeo (the quality is somewhat lower though):

A time-lapse showing motion near Jupiter's north pole. The time-lapse sequence was created from three mosaics of images obtained by the Jovian Infrared Auroral Mapper (JIRAM) instrument aboard NASA's Juno spacecraft on February 2, 2017. The three mosaics were obtained over a period of a little under 3 hours. During that time the spacecraft was approaching Jupiter and the resolution of the images was getting better. The time-lapse is in orthographic projection and shows the polar area from directly above the north pole. It has been 'tweened' (in effect adding synthetic frames) to make the motion smoother. Because the original video is very short it is looped four times. For full resolution, download the image in MP4 format.

It is possible to use the JIRAM infrared images to attempt to guess what areas not imaged by JunoCam might look like at visual wavelengths. 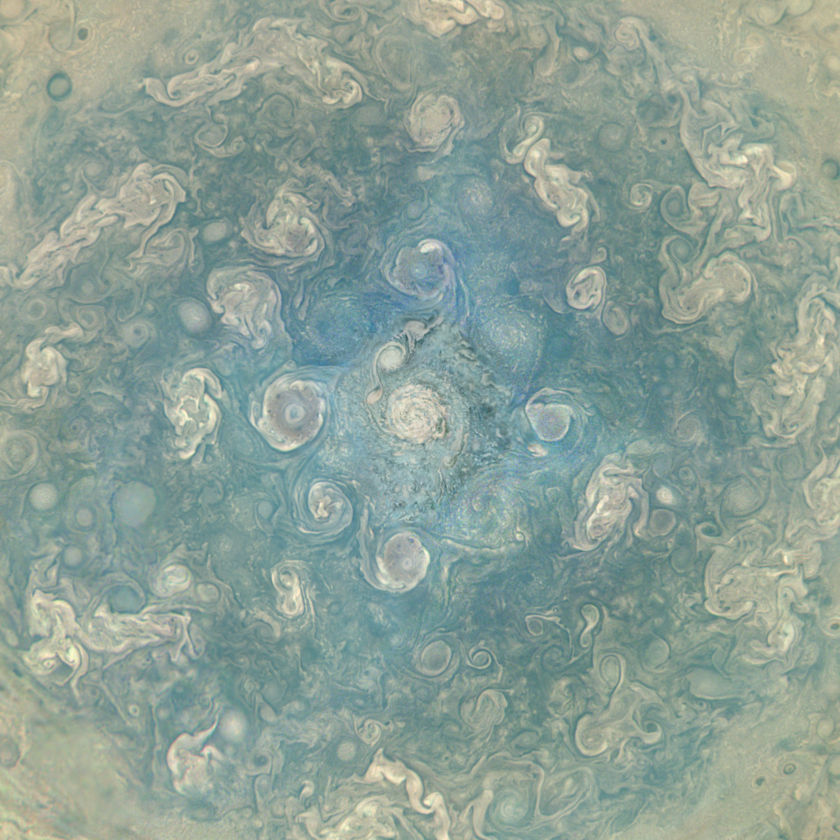 An impossible view of Jupiter's north pole, as it would appear if lit and viewed from directly above. It is a mosaic of JunoCam images from perijoves 1, 3, 4 and 5. The effects of the varying global illumination have been removed. Because the very north pole was in winter darkness at the time of these perijoves in early 2017, an inverted, heavily processed and colorized JIRAM mosaic was used to fill the gap.

This shows all nine circumpolar cyclones (CPCs) in their full glory. The mosaic shows the north polar region from directly above and is in orthographic projection. These images have been processed to show details in the areas that appear very dark in the original images. Comparing JIRAM images to visible light (JunoCam) images reveals that the JIRAM images are somewhat similar to inverted visible light images; features that appear bright at visible wavelength are usually dark in 4.78 µm images and vice versa.

Small-scale details in the cloud morphology should be fairly accurate/realistic but the overall contrast, brightness and color are based partially on a visual comparison of the JunoCam and JIRAM data farther from the pole where useful data from both instruments is available. It is difficult to guess how accurate this is, but it is definitely far better than leaving this area blank! 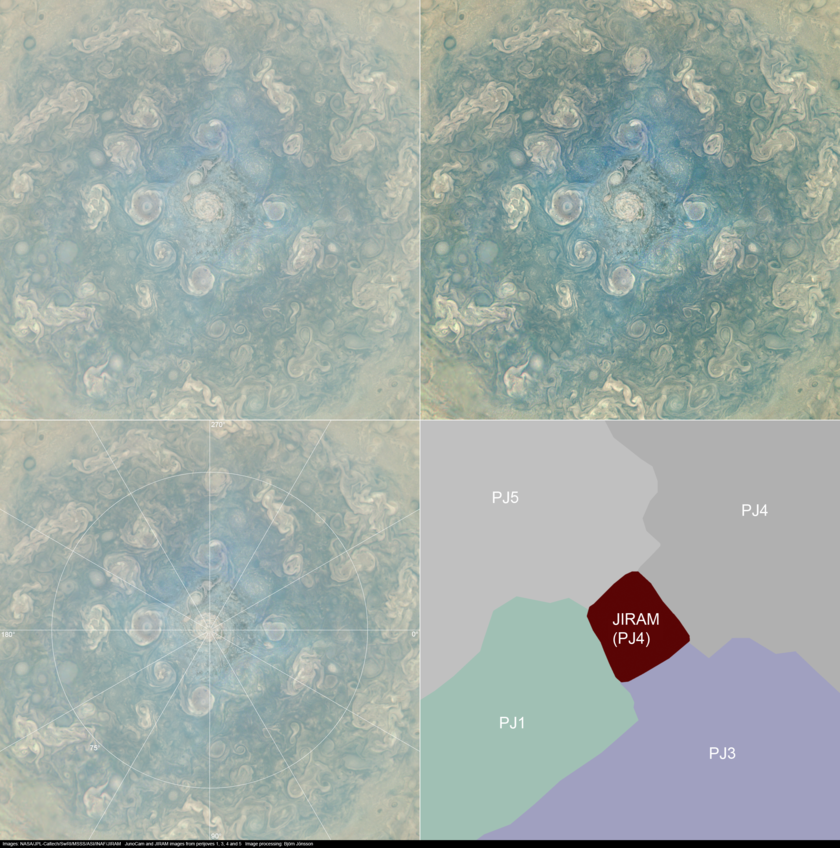 The montage shows the following:

The JIRAM data appears a bit different from the JunoCam data in the mosaic but this is mainly because the JIRAM images suggest that the overall color and brightness in the area very near the pole (including the central cyclone) really are different from areas farther from the pole. Another factor is that the JIRAM data is of somewhat higher resolution. Also unlike JunoCam, the difficult illumination conditions in the polar region do not affect the JIRAM images.

I created a similar mosaic of the south pole, where I did not need JIRAM to cover the pole. 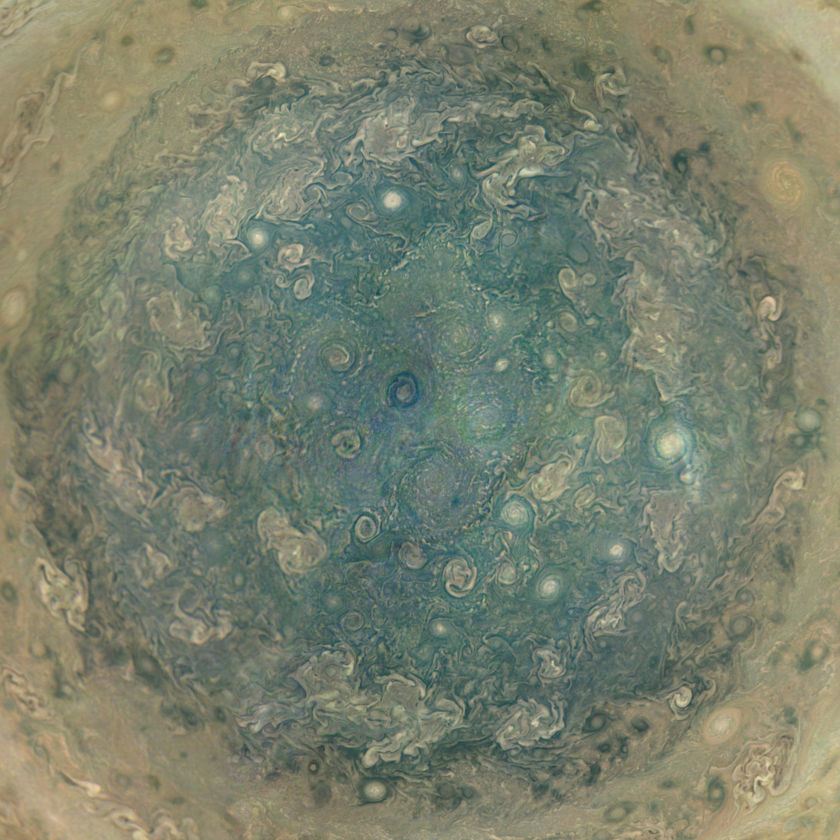 An impossible view of Jupiter's south pole, as it would appear if lit and viewed from directly above. It is a mosaic of JunoCam images from perijoves 6, 7, and 8 in May, July, and September 2017. The effects of the varying global illumination have been removed.

Usually a spacecraft's highest-resolution imaging instrument is a visible light camera, but Juno is an exception. JIRAM's resolution is higher than JunoCam's. While JIRAM's images are small compared to the JunoCam images (only 432 pixels in the horizontal direction), it has much narrower field of view than JunoCam (5.9 degrees vs. JunoCam's 58 degrees). Combined, this means that the JIRAM images have about three times higher resolution than the JunoCam images, but they also cover a much smaller area.

All of the JIRAM images through perijove 6 are available at the Planetary Data System Atmospheres Node and can be converted to PNG files using IMG2PNG. Thousands of images have been obtained by JIRAM. (Gerald Eichstädt has created some synopses.)

Because JIRAM has obtained so many images, often with an interval of only 30 seconds, they can be animated. Below are two animated GIF examples.

An animation of 186 Juno JIRAM images obtained over a period of 1 hour and 35 minutes from a distance of approximately 8 million kilometers. The images have been processed to reveal details in areas that appear very dark in the original data. The bright spot to the right of Jupiter is Io, visible to JIRAM because is glowing with heat from its many active volcanoes.

An animation of 145 Juno JIRAM images obtained over a period of 1 hour and 16 minutes from a distance of approximately 1.6 million kilometers. Even though it may look as if the spacecraft is traveling south to north this is not the case; it is the direction in which the spacecraft is looking that changes. The Great Red Spot is clearly visible. Images have been processed to reveal details in areas that appear very dark in the original data.

When I processed the images, I decided not to remove noise or make the animations more 'stable'. Both because it would have been a lot of work but also because I actually prefer these animations without 'cleanup'. They appear more realistic that way. This is a matter of taste but sometimes less is more when it comes to image processing.

Here is a third animated GIF from JIRAM images. The source images were obtained during the perijove 5 pass on March 27, 2017. Unlike the other two animations, which I gave a frame rate of 30 frames per second, the frame rate here is 25 frames per second (30 was too fast). The processing is identical to the processing I did in the other two animations above.

The animation consists of 104 frames that cover a period of one hour. At the start of the animation Juno's distance from Jupiter's center is 167000 km but at the end it has increased to 254000 km. The images have been processed to reveal details in areas that appear very dark in the original data.

Hi Bjorn, Thanks for sharing the great work you helped with! That is some interesting IR data. It would be nice to see the data over time in a 'then and now' side by side comparison to see the changes more easily and to see if this indicates a chemistry change due to heat variances. Thanks again!

JIRAM is a wonderful addition to Juno's suite of instruments since it wasn't included when Juno was originally approved as the second New Frontiers winner. It was a wise choice to include it during implementation after Italy offered to provide it. Jupiter is such a wonderful planet that deserves to be observed across as much of the electromagnetic and physical spectrum as possible. Juno is doing that.