I recently visited a local preschool to share my love for space with a pre-Kindergarten class. I’d done school visits before, but this was my first time doing space outreach (I’m a biologist and I’m usually there to talk about DNA, plants, or evolution), and my first time doing any kind of science outreach with kids younger than five years old. I wasn’t sure what to do or expect, but I figured, if we can put someone on the Moon, I can talk to very young children about space. I’ve applied twice for NASA’s astronaut candidate program, and made it pretty far the first time. It was the main reason I was invited to visit.

Before the visit, I searched online for space activities for kids. There are some great resources out there (check out NASA’s education resources), but many seemed too old for these kids, were complicated, and/or required a lot of preparation, so I ended up inventing my own. I came up with two activities, described below, and planned to intersperse them with talking and answering questions about space, what it’s like to live in space, and how to become an astronaut.

The preschool, Kids’ Corner, is in my own small town, Bar Harbor, Maine, walking distance from my house. I’ve been by it hundreds of times, and have friends and colleagues with children there, but I had never been inside. When I arrived, I was welcomed into the warm, visually fun and busy space, by two teachers. The kids were in another room having a snack, so I got to look around at all they had done to prepare for my visit.

Both teachers and students had clearly worked for weeks making paper-mache space helmets, foam “Moon boots”, a huge cardboard rocket complete with cockpit, a giant Moon, a model of the Solar System, and other details. It was spectacular. They even covered the play-room with white sheets, putting pillows underneath so kids could try “walking on the Moon” in their foam boots. They had also been learning about space and so the kids were full of questions and excitement about it, which made my job a lot easier! 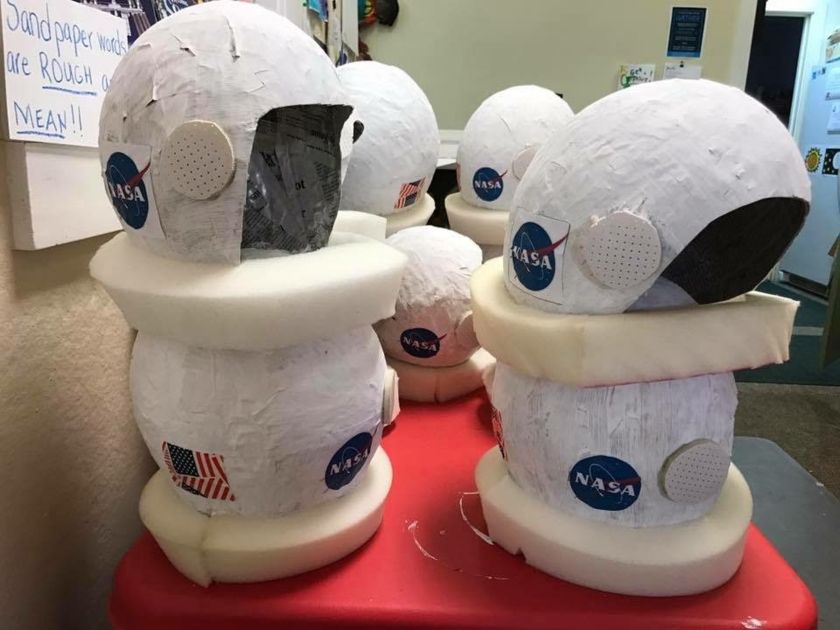 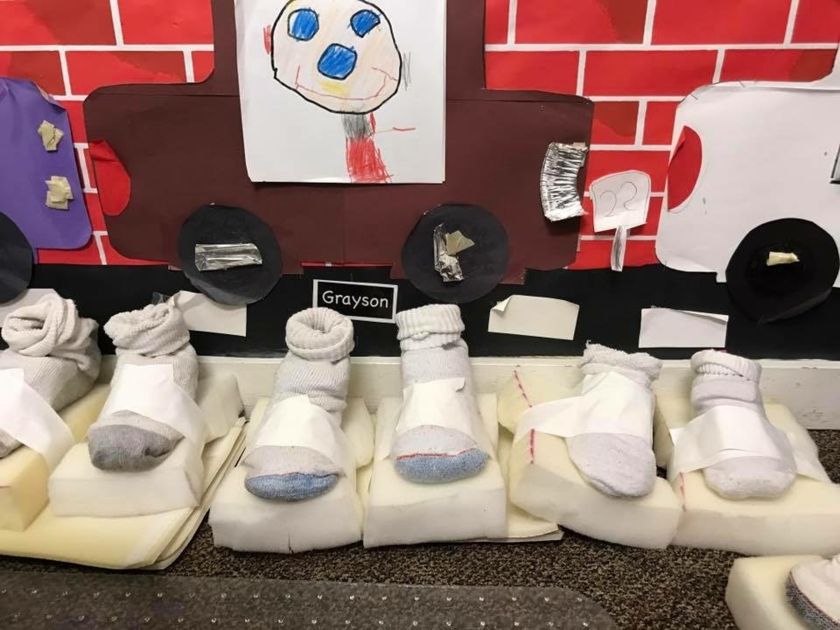 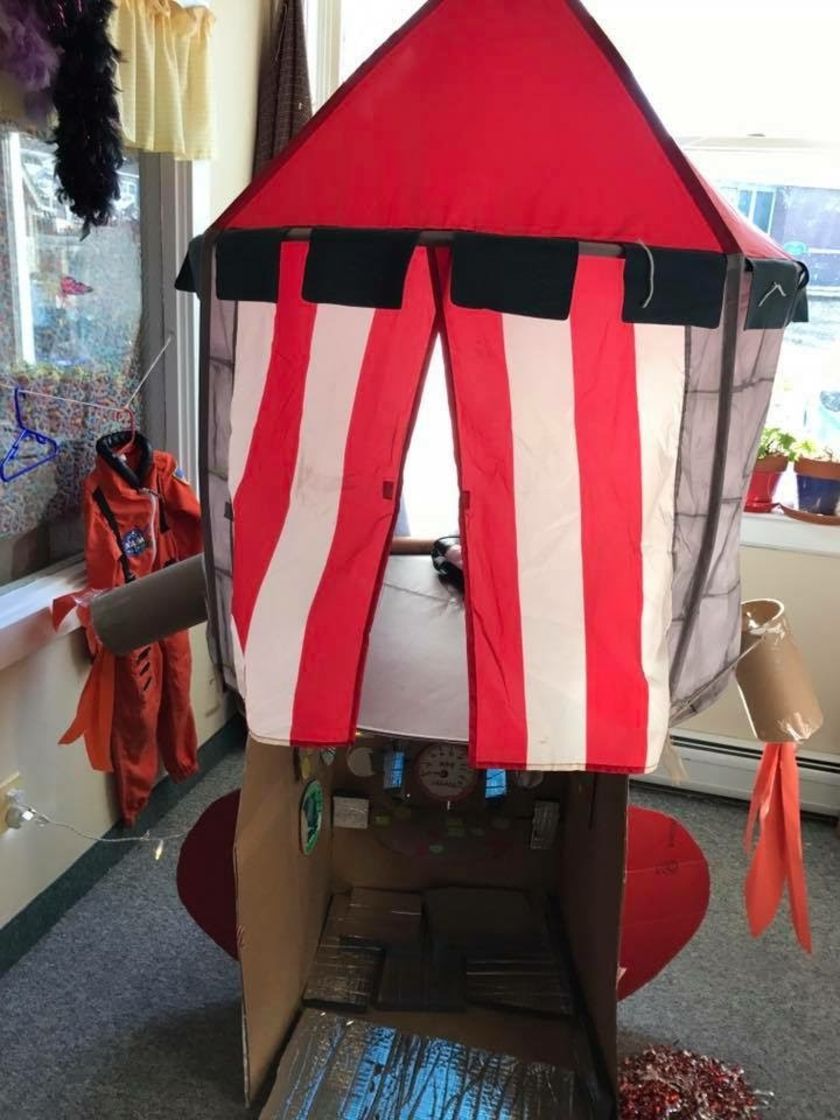 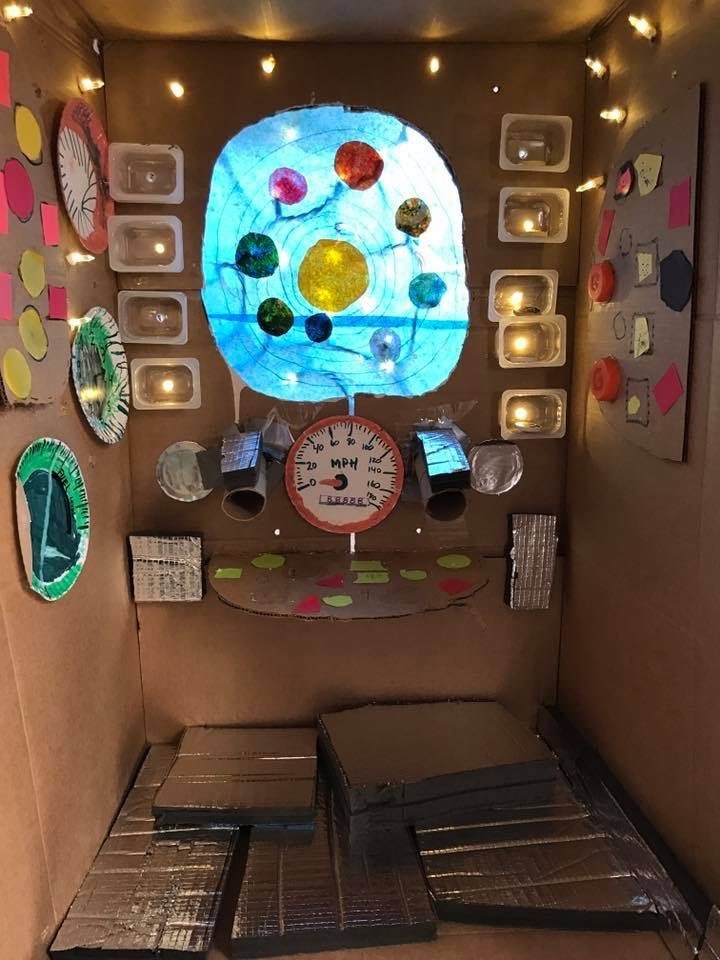 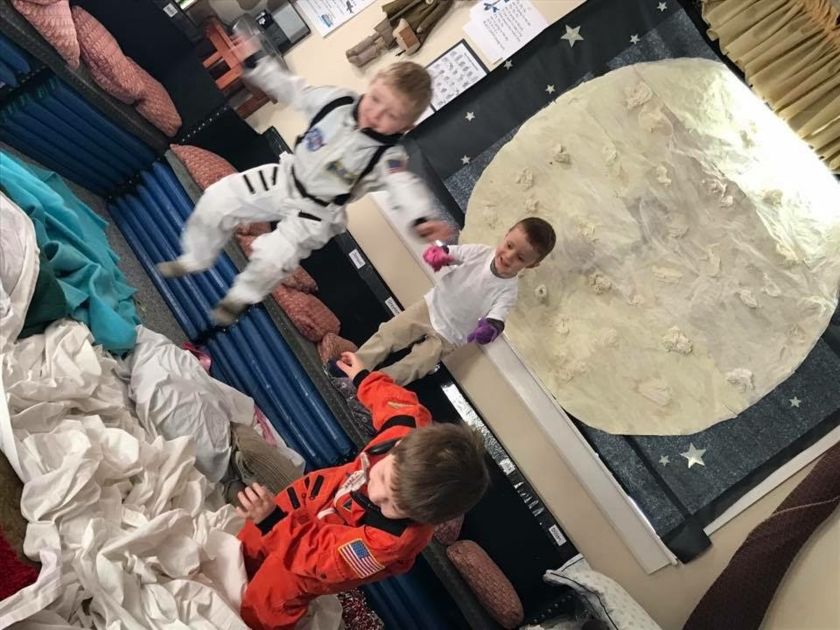 Jumping on the Moon

The kids came in two at a time, so they could each have help putting on their helmets and boots, and get a chance to “blast off” in the rocket before “walking on the Moon” and finding a seat. Once they were all assembled, I came out (with Star Wars music for my entrance) and they were all staring at me, wide-eyed. It took a few minutes of me talking to them about who I am and that I am excited to tell them about space before they got comfortable enough to start asking questions. I don’t know if I didn’t match their image of an astronaut, or if they were just a little bit scared, after all the build-up.

After we talked about space for ten minutes or so, I introduced my first activity. I had made a Sun, Earth, and Moon beforehand out of poster-board, pencil, ink, and paper. I invited three volunteers at a time to come to the middle of the room, choose a prop, and physically re-enact, by walking in circles around each other, the orbits of the Earth around the Sun, and the Moon around the Earth. It was super cute. The Sun stood proudly in the middle, with the Moon chasing the Earth around, trying to get ahead so that they could finally get at least once around the Earth. We kept having to remind the Earth to slow down so that the Moon could have a chance to go around. When the Moon got between the Earth and the Sun, I shouted, “okay, now freeze!” and explained that this is what is happening when there is a solar eclipse, like the one we had this summer. 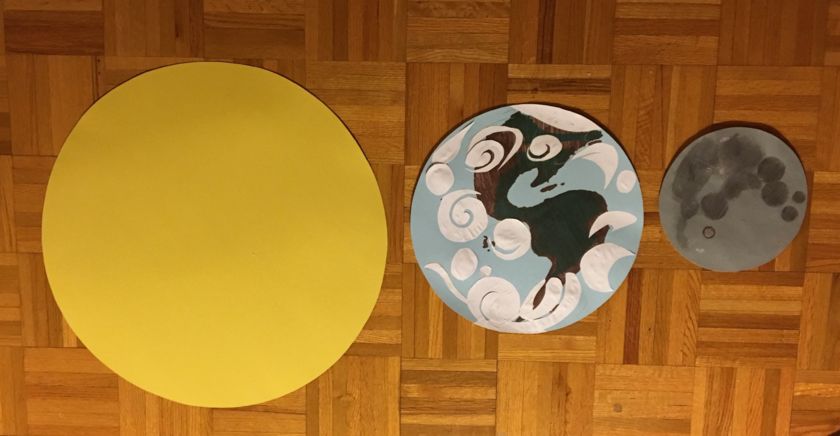 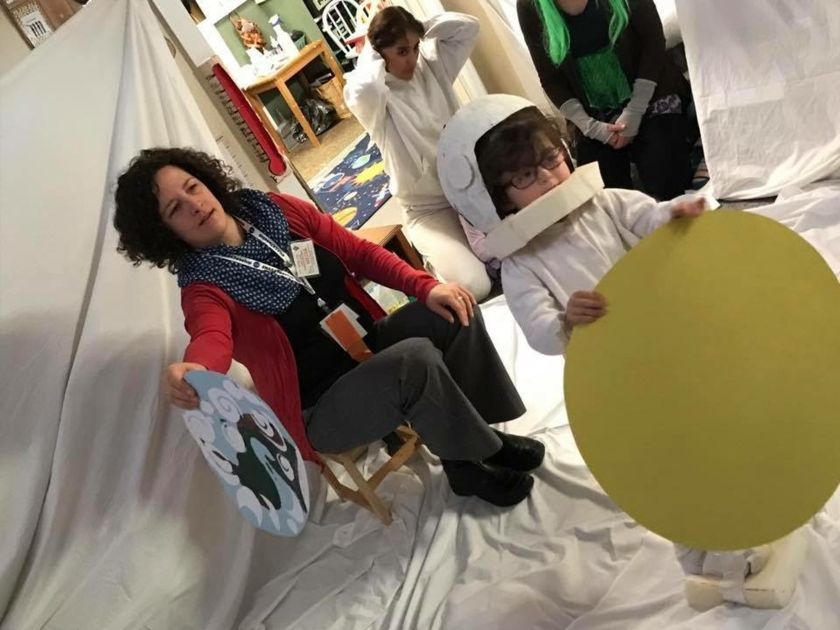 After this activity, I asked, “okay, so now we’ve demonstrated how the Earth goes around the Sun, but how do we really know?” I talked a little bit about science and how it’s something we do when we want to find out the truth, or how something works, then moved into my second activity.

Holding a yellow camping flashlight to represent a star in the night sky, I demonstrated parallax by asking the kids to close one eye and hold out their thumbs at arm’s length to block the light, then to open the other eye and notice how they can now see the light. I said this is how people figured out the Earth moves around the Sun, and not vice versa, because the positions of stars seemed to move slightly at different times of year, so it must be that the Earth is moving. I’m not sure they got it, but they seemed to enjoy holding out their thumbs and learning about science! Later, when we took photos, we said “parallax!” instead of “cheese!” 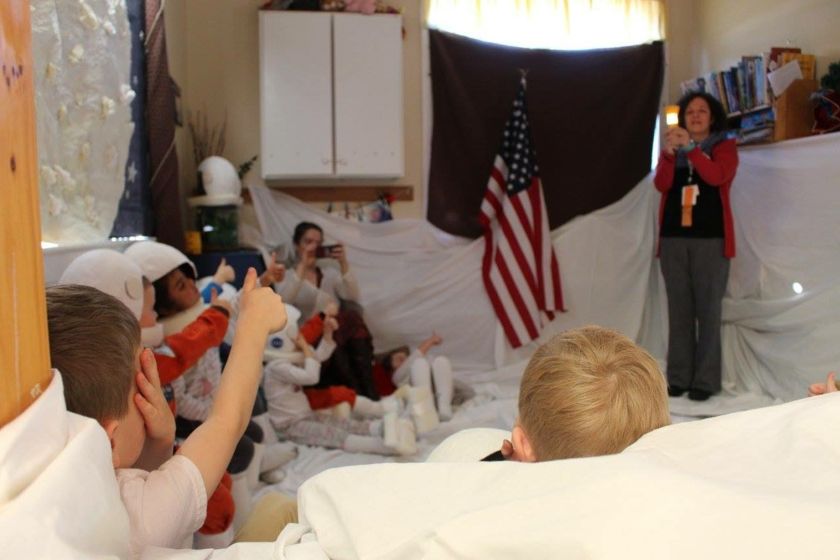 After the parallax activity, they sang songs they learned especially for my visit, including “Zoom, zoom, zoom, we’re going to the Moon!” and another song about the planets.

We talked some more about what it’s like to live in space (they had so many questions, including, of course how you go to the bathroom) and why space is such a special place. 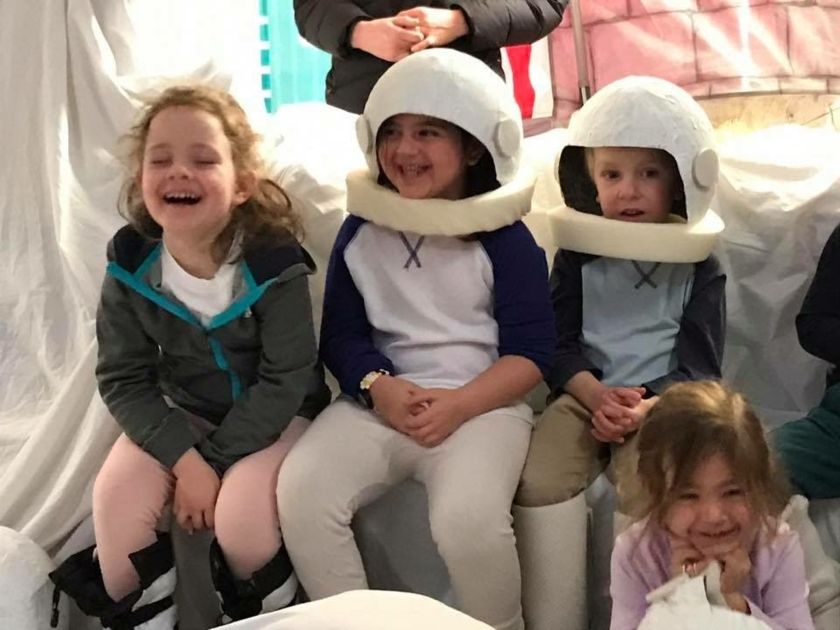 By this point, everyone was pretty spent, including me. We wound down and said our goodbyes, and as I left I was surprised to find I’d been there for two full hours. The time had really flown by, but it explained why I was worn out! (As I tweeted afterwards, I have even more respect for early childhood educators than I did before.)

The next day, the teachers at Kids’ Corner asked the children what their favorite part of the morning was. Their answers were, “Learning about the moon orbiting the Earth”, “Learning about the Earth orbiting the Sun”, “The Sun, Moon, and Earth game you made for us”, “The flashlight game”, “Walking on the Moon”, “Going for a rocket ride”, “Making our own eclipse”, “Singing for you”, “Everything!”, “I loved being the Earth”, “I loved everything, too!”, and “I still want to know if turtles are in space.”

Having reflected a bit on what made the visit a success, I think a key factor was the advance preparation done by the teachers and children together: they talked about space, thought up questions, made space-crafts (helmets, boots, the rocket, etc.), learned songs, and generally got excited. That helped the kids engage more meaningfully, and for longer, I think, than they would have with no preparation. 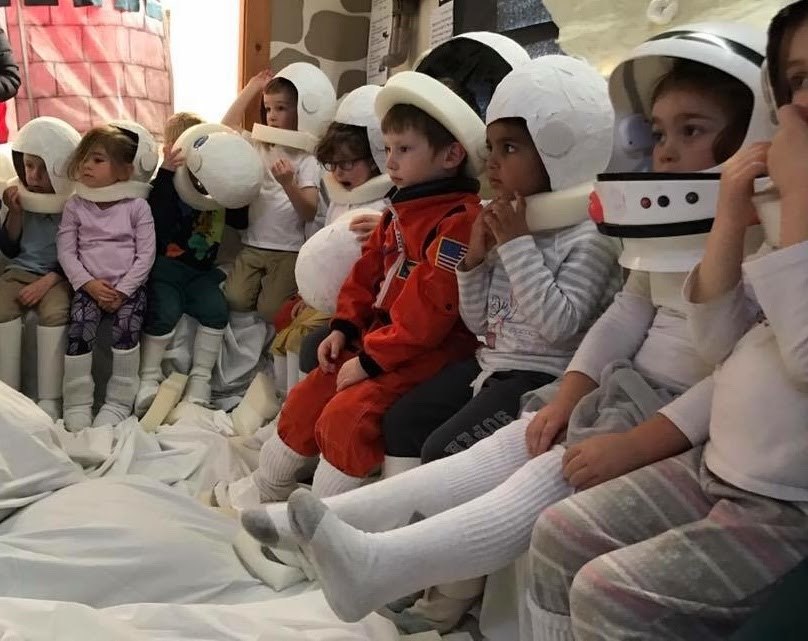 For my part, I think my activities were well suited to the age group. They were fun, simple, and physical, with bright, visual props, and they broke up the talking sessions, keeping the kids’ energy levels and interest up. It turns out putting together a fun and meaningful pre-K school visit about space isn’t rocket science. 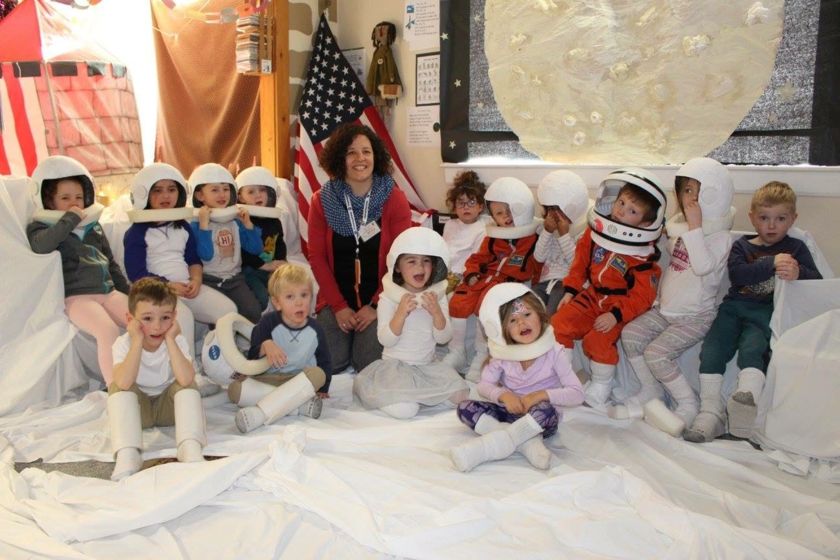 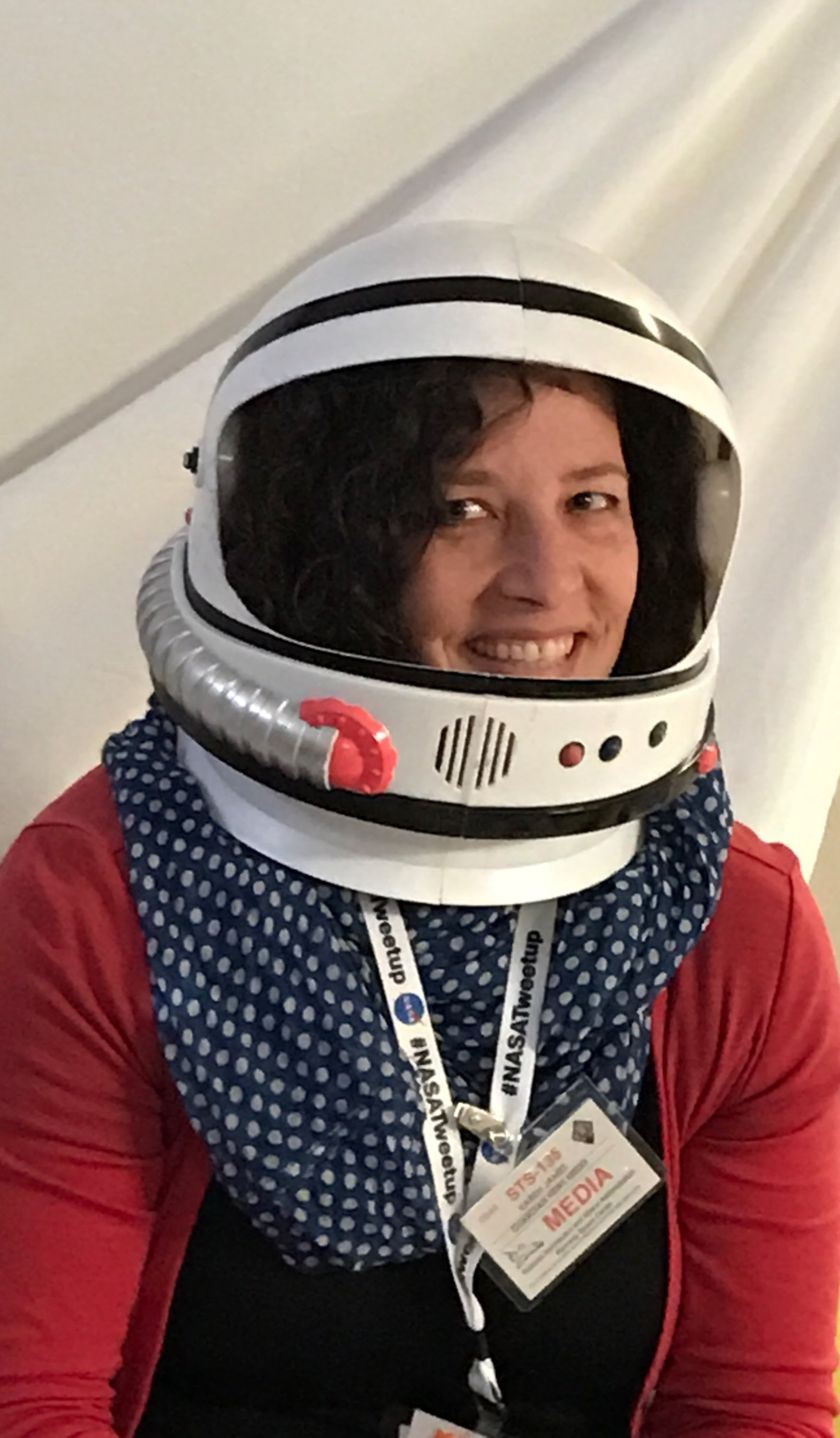 Getting in on the helmet action

Karen James is an independent scientist in Bar Harbor, Maine. She uses DNA-based species identification (“DNA barcoding”) and other molecular ecology techniques to support a range of local and international environmental research, conservation, and restoration projects. Her Twitter handle is @kejames. 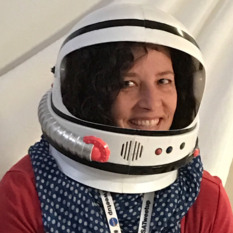