Last month, the world watched as Cassini plummeted into the upper atmosphere of Saturn—a fitting Viking funeral for a robot that had operated magnificently for two decades in the unforgiving environment of deep space.

One may attach human characteristics to Cassini, for it essentially acted as a human proxy in our quest to better understanding our universe: it sniffed out the composition of molecules, tasted charged particles, felt out the textures of alien moons via radar, listened in to radio emissions from its home planet, and last but not least, used its suite of electronic eyes to gaze upon and observe the many breathtaking vistas it encountered on its journey.

Cassini helped so many folks all over the world—scientists and laypeople alike—to become vicarious explorers of the solar system, and of course, the Saturn system in particular. So when the mission came to an end this past September, I felt a sense of melancholy and bittersweet pride. Cassini is no more and that hurts, no matter which way you slice it.

I’ve felt a particular affinity to Cassini ever since I sent a signed postcard to the Planetary Society in 1996 (signatures were scanned and burned onto a CD that was subsequently bolted to the side of the spacecraft). As such, I debated how to mark the end of the mission—surely I couldn’t just release a wistful sigh and then get on with my life? No, there had to be a more meaningful way to mark the end of this marvellous chapter in space exploration.

And then I had it—almost exactly 48 hours before the two-story probe disintegrated and became forever a part of the sixth planet, it had captured what was to be its final portrait of Saturn and the rings. Its electronic eyes (or the Image Science Subsystem, to use the more prosaic moniker) were cast upon the beringed giant, methodically recording image after image in a variety of exposures and filters. If the 13-year gravitational coupling between Cassini and Saturn were a waltz, this image would, in my eyes, come to represent the ‘last dance’ between the two bodies. That phrase stuck.

By the time the 15th of September came around, and all waited for Cassini’s death gasp to arrive in the form of a truncated radio signal, the raw images of this ‘Last Dance’ mosaic had already been downlinked and released to the public. Many talented peers in the image processing community had already produced fantastic renditions in a very short space of time (most notably Jason Major, Kevin Gill, and Don Davis).

If this had been a regular, run-of-the-mill observation, I would’ve been content to let their hard work represent this moment in time. But this was no ordinary moment in time: it was a watershed moment, a picture that said more than a hundred eulogies could convey. I **had** to make my own version of this mosaic! It wasn’t about doing a better job than my peers; it wasn’t about getting noticed on social media; it wasn’t about anything else except wanting to deal with the end-of-mission in my own way: a cathartic and almost ritualistic process that would, to use the much-vaunted term, bring ‘closure’ to my own Cassini adventure. As such, I poured more hours into this than otherwise would be warranted. I allowed my inner-perfectionist to run riot, at times driving the saner part of me to distraction!

Having produced two other large color Cassini mosaics over the previous 12-months (the so-called ‘Glutton For Punishment’ view from 2016, and the more recent ‘Grand Finale’ vista), I had developed my own approach and workflow that seemed to reliably pay dividends, as long as I was willing to put in the long, arduous hours.

Cassini took the images for this wide view of Saturn on October 28, 2016, less than a year before the end of the mission. The season has advanced virtually to the opposite of what it was when Cassini arrived: it's full summer in the north pole, where Saturn's clouds make a hexagon shape. The season makes Saturn cast a relatively short shadow onto its rings. The night side of Saturn is faintly illuminated by reflected ringshine. Three moons are visible: Epimetheus (just above the right ansa, near Saturn); and Atlas and Prometheus (at the tip of the left ansa). 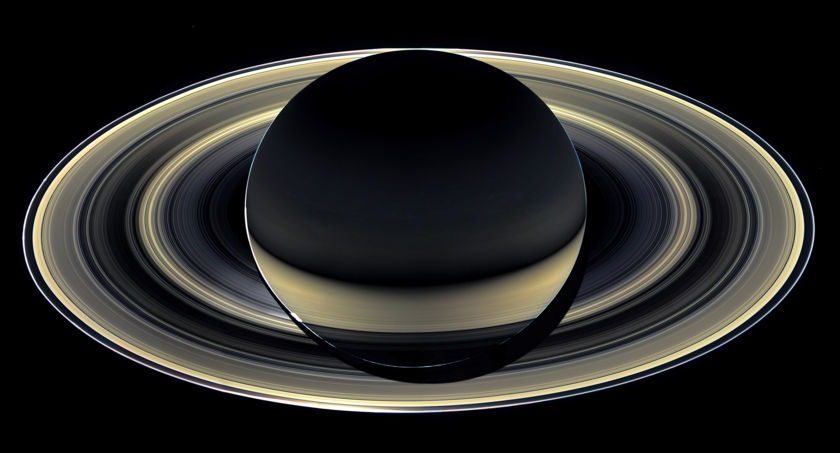 In the early hours of April 13, 2017, Cassini captured this breathtaking and unique visage of the Saturnian system as it coasted through space in the shadow of the gas giant.

Cassini took nearly four hours to collect these data. In that time, the spacecraft was slowly cruising away from the planet, en route to apoapse (the point farthest from Saturn in any given orbit) of Revolution 269. The distance to the planet increased by 82,000 km in that time, and in the end, the distance to the cloud-tops equaled 650,040 km.

I discovered that having a template, much as a dressmaker might use, was particularly helpful. To that end, I used Mark Showalter’s Saturn Viewer to render the view from Cassini’s vantage point at the midpoint of the observation. (Cassini took two hours to shutter all seventy-six images for this mosaic, starting at 13:09 UTC on September 13). The computer-generated wireframe depiction of Saturn was to be the anchor layer against which all of the individual frames would be matched against.

Saturn and its rings were covered by a grid of ‘footprints’, 5 across and 2 high. These ‘footprints’ are points or objects in space that a spacecraft’s camera stares at, capturing one or more photographs in the process. All data captured, the spacecraft changes its attitude to point the sensor in question in a slightly different direction (aka a new ‘footprint’).

The footprints of Cassini's last dance

In this instance, Cassini used the wide-angle camera (WAC) to obtain the photographs collected in each of the ten footprints. These images included shots via the red, green, blue and clear filters the WAC possesses. Furthermore, long and short exposures were shuttered to capture detail in the bright rings and sunlit crescent, as well as the more subtle details on the nightside of the planet.

My approach from this point onward can be succinctly summed up in bullet-point form:

In the early afternoon of September 13, 2017, the venerable and much-loved Cassini probe captured this final portrait of Saturn and its main ring system, before plummeting to fiery destruction in the planet's hazy atmosphere just 48 hours later.

Using its Wide-Angle Camera (part of the Imaging Science Subsystem), Cassini snapped 75 photos: these images can be grouped into a grid of 6 by 2. Each footprint in that grid was covered with both long and short exposures via the red, green, and blue filters, plus a longer exposure shuttered through the clear filter.

The veteran spacecraft took nearly two hours to collect these data: starting at 1:09 PM and concluding at 3:17 PM (all times are UTC). Only three moons—Enceladus, Janus and Mimas—can be picked out in the uncalibrated and compressed data. 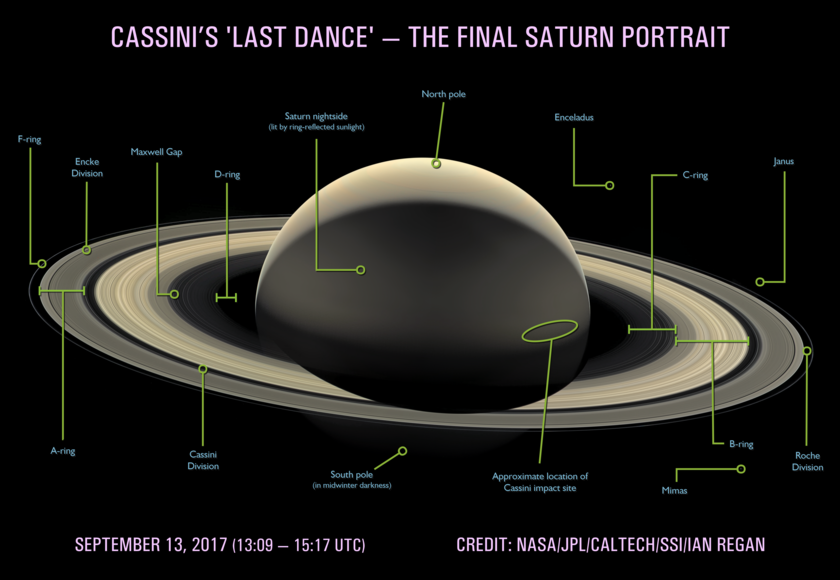 Every so often, I paused to save and back-up a new iteration of the ‘Last Dance’ mosaic. Unusually, I retained all the intermediate stages (normally I delete the oldest versions after a certain point), enabling me to produce the following GIF, depicting the gradual evolution of the mosaic:

Behind the scenes of the Last Dance

The final product came out much better than anticipated, and it provided me with the sense of closure and finality I’d sought for. It is not meant to be the definitive rendition of these data, and I fully anticipate an official version to be released before the year is out.

However, as much as having my signature sent to Saturn represented the opening chapter in my own Cassini journey, this image is my personal epilogue at the other end of the story. In my my eyes, the journey is now complete and the circle completed. Cassini is gone, but the legacy lives on, as will the images and data, one hopes, for millennia to come. 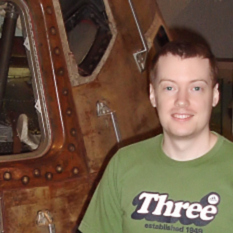 Lovely image and workflow, you make it look easy. I, too, remember signing my postcard (after strongarming 3 of my friends to also sign it) and sending it in to be digitized... I still think of that postcard each and every time I have filled out the numerous name-submission online forms for all those missions that have come ever since. Cassini was a special bird.