We're less than a week away from one of the most talked-about astronomical events in many years - the "Great" North American solar eclipse! The Internet abounds with articles that discuss how eclipses work, give you a map of the path of totality for this eclipse, and even tell you about some of the planets you might see during the eclipse. This is all fantastically exciting, but there's one more possibility that would put the cherry on the eclipse cake...

Now, be forewarned: the odds are heavily stacked against us, and the level of skill required for any individual to pull this off might range from "little" to "legendary." But with that in mind, there does exist a chance—a slim chance—that we could see a comet next to the Sun during the eclipse!

Some readers may know that for many years (nearly 14 years now!) I have been the principal investigator for the NASA-funded Sungrazer Project—a citizen science project that enables anyone in the world with internet access and a computer to search for, and discover, new comets in images recorded by the joint ESA/NASA Solar and Heliospheric Observatory (SOHO) satellite. Since SOHO launched in late 1995, the project has discovered an extraordinary 3,358 new comets—far more than half of all known comets! The vast majority of these comets are so-called "Kreutz" sungrazing comets; these are the ones that we'd be looking for during the eclipse.

What most people perhaps don't realize is that almost every one of SOHO's comets have been discovered during an eclipse...albeit not a regular eclipse like we'll see next week. SOHO has a number of scientific instruments on board, but the heavy hitter for comet discovery is the US Naval Research Laboratory's Large Angle Spectrometric Coronagraph (LASCO) telescope—actually a pair of so-called coronagraph telescopes that observe the region in space surrounding the Sun, watching for coronal mass ejections, solar outflows, and such. LASCO takes these "false eclipse" images 24 hours a day, 7 days a week, and has done so for more than 22 years now. 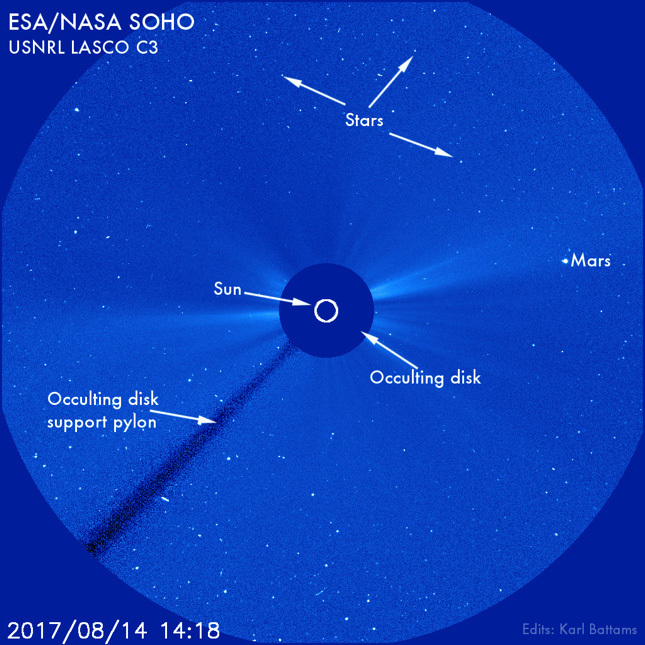 A comet during the eclipse?

This image is from the SOHO/LASCO C3 coronagraph, taken just a week before the 2017 eclipse. A coronagraph is a type of telescope that looks directly at the Sun, but holds a solid occulting disk in the center of the image to block out the direct, blinding sunlight and enable us to see the much fainter stuff surrounding the Sun, just as the Moon blocks the Sun during an eclipse. Most notably—and just like a solar eclipse seen from Earth—this reveals the Sun's corona, nearby bright planets and stars, and, if we’re lucky, a comet!

In essence, coronagraphs work by creating a false eclipse in space and revealing the Sun's faint corona. What this means for us is that for a few brief minutes during the eclipse totality, observers on Earth will be seeing more or less exactly what our telescopes are seeing in space—and that might include a comet!

Historically, comets have been seen during eclipses. During the eclipse of 1882 a very bright Kreutz sungrazer was seen next to the Sun, and in 2008 it seems that Miloslav Druckmuller might have fortuitously imaged a SOHO sungrazer. So we're not talking of something unprecedented here, but we're going to need a lot of luck.

There are several possible wrinkles this year in our quest to see an eclipse comet. First, we can't predict when sungrazing comets will come along, and if we're really lucky, we'd only get maybe a day's advance notice that one will be near the Sun during the eclipse. SOHO/LASCO discovers a new comet every three days on average throughout the year, but some some months are better/worse than others for reasons relating to viewing geometry, and as luck would have it August is one of the worst months. Numerically, I'd say we have around a 5 percent chance of a comet being near the Sun during totality. Not great, but not zero!

The second wrinkle is that even if we have a comet near the Sun, it could be really faint and at the very least, technically challenging to observe. I've put together the image below that shows the general area in which a generic Kreutz-group comet would be found. The image assumes a south-facing observer in Tennessee, but the geometry will change only minimally for other locations. The position of the track will not change relative to where Mars and Venus are, so they are good guides. Barring an exceptionally bright comet, any sungrazers near the Sun will be fainter than Mars or Venus, so if you can't see those then a comet is unlikely. For experienced observers, I'll be producing ephemerides should a comet happen along. Details on that in a moment. 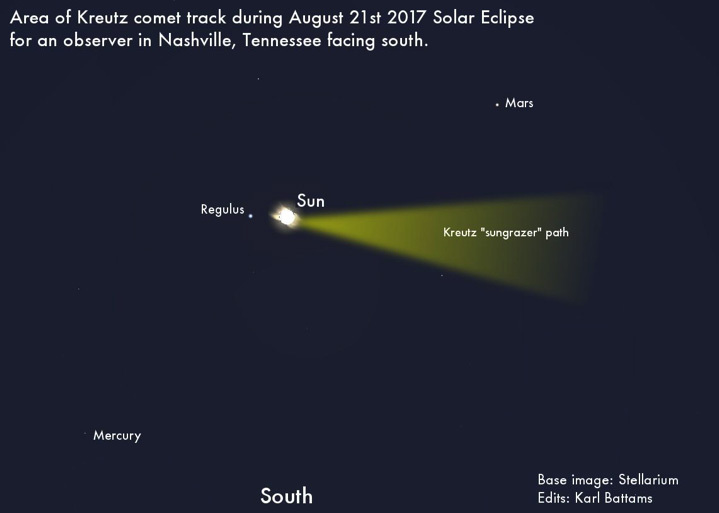 The yellow region shows the approximate area in which Kreutz sungrazing comets would appear during the eclipse. Note that even though comets move fast, they would NOT appear to move at all during the two or three minutes of totality that any observer may get. This image assumes a South-facing observer in Tennessee, but the geometry here relative to the Sun and Mars is basically the same for everyone during the eclipse.

Given the technical challenge here, I'm delighted to be partnering with the man who put the "Hale" in to "Comet Hale-Bopp", Dr. Alan Hale. He and I have collaborated on a handful of eclipses, but as yet have been unsuccessful for a variety of reasons. He has put a lot of prep work into this one, including observations of the Pleiades in twilight to assess how bright/faint we can go. Assuming weather and comets cooperate, we're optimistic that he would be able to detect almost any comet that SOHO discovers during that time.

This is the big question for the vast majority of folks. Here's how things are going to play out. Leading up to the eclipse, I will diligently check for reports of new comets in the LASCO images. Should one turn up, I'll do my science thing and make the necessary measurements such that an approximate orbit (and thus position in the sky) can be calculated. If/when we have those details, I will make them publicly available on the my Twitter page on Monday morning (hopefully by 14UT/10EST). I'll also give an estimate of the comet's brightness, both in science terminology (visual magnitude), and relative to the nearby Mars. If it's super-bright—to the point that basically anyone can see it—then I'll certainly make that abundantly clear.

So, the bottom line: Monday morning, a couple of hours before the eclipse, take a look at my Twitter feed. I will give clear instruction on whether a comet is known to be near the Sun, how bright that object might be, and how/where you might be able to see it. Our odds truly are slim, but the payoff would be awesome! Either way, get out and enjoy the eclipse if you can, and please do it safely!