Russia's most powerful operational rocket faces a new ban on all launches for at least a half a year, as the nation's space officials try to sort out egregious quality control problems within the industry. Russian media and unofficial sources in Moscow report the Roskosmos State Corporation recalled all Proton rocket engines in the wake of serious violations of their manufacturing procedures. As a result, Russia begins 2017 with practically its entire rocket fleet grounded. 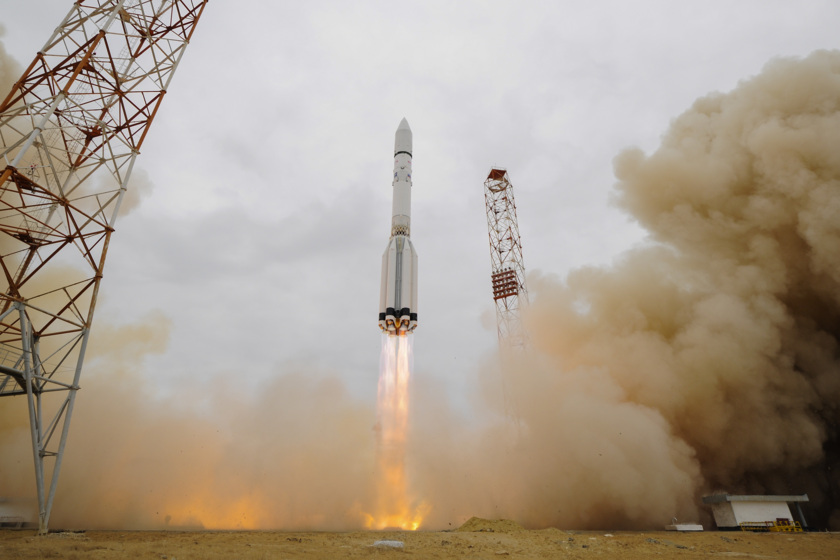 The Proton rocket last launched on June 9, 2016, delivering the Intelsat-31 communications satellite into the geostationary orbit. The mission was declared a success, but multiple unofficial sources and available flight data pointed at technical problems during the operation of the second stage. The Proton remained grounded for the rest of 2016, and its return to flight has been continuously delayed—first to January and then to February 2017.

In January, increasingly gloomy rumors about the state of affairs with Proton and its manufacturer, GKNPTs Khrunichev, circulated on the Internet; however, the company vehemently denied any serious problems with the rocket. On January 23, the Kazakh-based division of the Interfax news agency reported a likelihood of the unusually lengthy delay with Proton missions, which could last several months. A day later, the Kommersant newspaper reported a recent firing test had revealed technical problems with RD-0210 and RD-0212 engines, which propel the second and third stage of the Proton, rocket respectively.

The engine problems were reportedly traced to illegal replacement of precious heat-resistant alloys within the engine's components with less expensive but failure-prone materials. The report in the Kommersant echoed the results of the investigation into the 2015 Proton failure, which found that low-quality material in the turbo-pump shaft of the engine could lead to an accident. 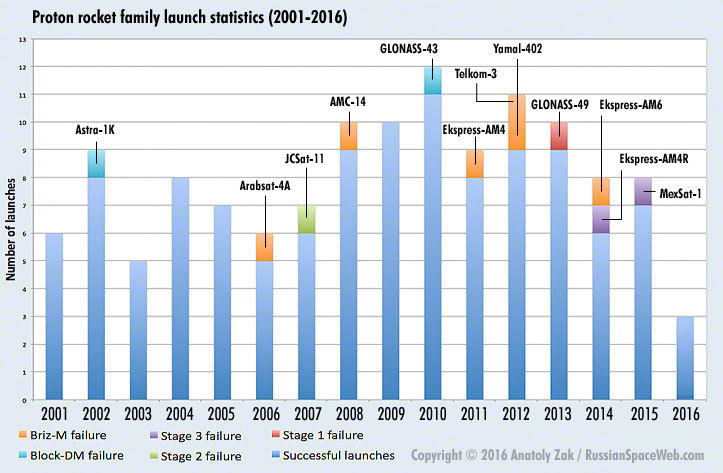 On Jan. 20, 2017, Head of Roskosmos Igor Komarov chaired a meeting of top managers at the Voronezh Mechanical Plant, VMZ, which manufactures rocket engines, including those used on the third stage of the Soyuz rocket and on the second and third stages of Proton. The high-profile meeting followed a decision to return already manufactured RD-0110 engines from Soyuz rockets back to Voronezh, after the engine had been suspected to be a culprit in the loss of the Progress MS-04 cargo ship on Dec. 1, 2016, as it ascended to orbit onboard the Soyuz-U rocket.

According to Roskosmos, Ivan Koptev, Director General at VMZ, resigned due to poor quality control at the company and the January 20 meeting resulted in several decisions aimed to improve the production quality at VMZ. According to Kommersant, at the same meeting, Roskosmos also made a decision to recall dozens of Proton engines built at VMZ during past several years. It also initiated the quality control audit at VMZ conducted by a team of experts from another leading Russian rocket propulsion company: NPO Energomash in Moscow.

Under the most optimistic scenario, the Proton might not return to the launch pad earlier than June or July. As a result, Moscow now finds both of its main space transportation systems, Soyuz and Proton, plagued by quality control problems. To make matters worse, other rockets in the Russian fleet—Zenit, Dnepr and Rockot—were essentially lost due to the conflict with Ukraine. The grounding of the Russian rocket fleet comes at a time of increasing competition on the commercial launch market, making recovery measures even more urgent.

On February 27, the European consortium Arianespace plans to launch a Soyuz-ST rocket, which should restore confidence in at least one Russian-built rocket series and provide a morale boost for the beleaguered industry.

Despite major investments in the past decade, the companies comprising Roskosmos State Corporation continue suffering from brain drain, mismanagement, poor quality control and corruption. The latest high-profile problems with Proton are backdropped by many other lesser-known issues across the industry, including at GKNPTs Khrunichev. As an example, the company mismanaged the assembly of the Multi-Purpose Module, MLM, for the International Space Station, and the development of the new-generation Angara rocket. Both projects ended up nearly two decades behind schedule. After two successful launches in 2014, the Angara is nowhere to be seen and Khrunichev remains tight-lipped about its flight schedule. According to unofficial reports, the second Angara-5 rocket, which was assembled at the company's brand-new manufacturing base in Siberia, ended up being unfit for flight due to defects. In the meantime, the company's present and former employees posted a number of revealing accounts on the Internet telling tales of mismanagement and corruption behind its doors.

This is sad to see, since Russia has a proud history of space successes that have significantly prodded the US into one-up-manship that's benefited us all. It's even sadder because it was not hard to foresee.... http://www.aerospaceamerica.org/Documents/Aerospace%20America%20PDFs%202015/September%202015/AA-Sept2015_Feature1_StuckInDecline.pdf