When New Horizons' next target passed in front of a star, this scientist was watching from Argentina

I work as a planetary scientist at the Southwest Research Institute in Boulder, CO. My main area of research is the atmospheric and climate dynamics of terrestrial atmospheres, like Mars, Titan, and Pluto. However, I have a pretty eclectic background, having been involved in projects outside of my main area of research. Thus, when one of the astronomers in my office mentioned that I should get involved in an occultation campaign for the New Horizons mission, it made complete sense to me to say yes. And I am glad I did, because I had a lot of fun helping dozens of other astronomers in an ambitious observation campaign.

Although a Pluto flyby (which occurred in the summer of 2015) was the primary motivation for the mission, the New Horizons mission always intended to visit other Kuiper Belt Objects (KBOs) after the primary mission ended. In 2014, using the Hubble Space Telescope, the New Horizons team eventually found targets. Two years later, NASA approved an extended mission to one of those targets, a KBO named 2014 MU69.

MU69, as it’s known among the New Horizons team, is likely a small object, with an estimated radius in the 10s of kilometers. However, we are not really sure about its size, and we know very little about the albedo—which is basically the brightness of the surface—of MU69. We also have no idea if there are rings or debris surrounding MU69, which could be hazards for the New Horizons mission.

One of the best ways for us to to learn about the size, albedo, and surrounding debris of MU69 is to watch the KBO create what's called a "stellar occultation." When MU69 passes in front of a star, it temporarily blocks ("occults") the light of the star. If we take a time series of the light from the star, the occultation creates a deep dip in the light. The figure below shows an example of a stellar occultation, where the dots are actual measurements of the star’s brightness. The deep dip in the center of the figure is the occultation of a star by Chariklo, a Centaur that orbits between Jupiter and Neptune. The small dips before and after the main one are due to a ring of small particles in orbit around Chariklo. This is an example of the kind of information that the MU69 occultations will provide about the KBO and any rings and debris that might exist. 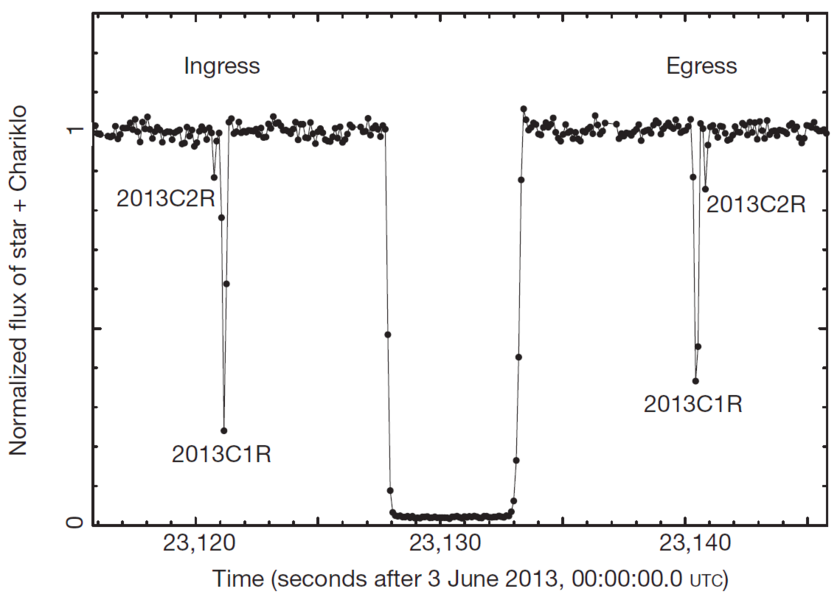 A ring system detected around the Centaur (10199) Chariklo

I was sent down to Mendoza, Argentina along with the rest of the team sent to South America to try our best to see the occultation. We had predictions of the path of the MU69 occultation as it intersected Earth, but even with these predictions there was uncertainty as to the the precise location we needed to be to observe the occultation. Therefore, we did not know where in the Mendoza province we would set up the telescopes until we arrived. Most of us arrived the Monday before the occultation event, which took place just after midnight local time on Friday night (03:15 Universal Time). The next day 12 teams of astronomers drove the countryside scouting for possible observations sites. They were looking for sites without trees or buildings, away from the city and any surrounding towns. Dozens of potential sites were found, and the final 12 sites used during the actual occultation observation came from this first day of scouting. 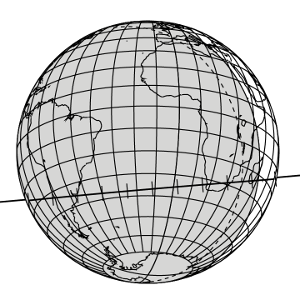 The path to the MU69 occultation of a distant star

I spent my days in the run up to the occultation night slightly differently. Since I speak a decent amount of Spanish, I helped track down supplies in the town of Mendoza. These tasks provided me with the unexpected pleasure of sharing our adventures as astronomers with the citizens of Mendoza. My favorite moment was convincing two employees at Easy, the Argentine equivalent of Home Depot or Lowe’s, to cut some wood for me that the teams could use as shims to help level the telescopes out in the field. I like to say that I speak “kitchen” Spanish or “family reunion” Spanish—I can argue baseball with my relatives or swap stories about a cousin’s misadventures in childhood. However, I don’t know many hardware terms in Spanish. For example, I had no idea how to say “shims”. But we worked it out. I described what we were doing, and the employees got excited about helping us out. This is just one quick story of how local Argentines helped us with this campaign.

Every night before the event night, we practiced using the telescopes. Some team members had a lot of experience specifically with the type of telescopes we were using. Many of us did not. We came from a variety of backgrounds, including professors, engineers, and students, among others. On Tuesday, the first night, there were challenges for every team. But by Thursday night, our dress rehearsal, we were ready.

We had some fun adventures along the way. On Tuesday night, we were provided a police escort to a park just west of Mendoza, where we practiced as one giant group. The next night, we again had police escort, but we split into three teams, each going to a different campground south of Mendoza. At the campground where I worked that night, I spent part of the evening talking with the caretakers of the campground and their family. They were puzzled by the trucks that rolled up to the site and began pulling out large boxes of gear. With the help of our police escort, I explained what were were doing after which the campground caretakers were eager to help us out. Next thing I knew, I was on the phone with the nephew of one of the caretakers, telling the young man all about our project. He was clearly an astronomy fan. Later in the night I found him out in the field with us, watching the teams practice for the occultation event.

Thursday night was a complete dress rehearsal. Each team went out to their assigned site and practiced the sequence of observations that we would execute on the actual event night. The team I was on included an extremely experienced amateur astronomer, an optical engineer who was also an experienced amateur astronomer, and myself. One of the State department officials from the U.S. Embassy in Buenos Aires also joined us. We found a ridge to the east of the highway that leads south out of Mendoza; this was one of the sites previously scouted two days before. Our only neighbor was a Catholic chapel a quarter mile west along the ridge. Otherwise we were alone, with clear skies. We found a flat spot on the ridge, parked our truck to block any wind, and set up our telescope. Everything went smoothly and we took 45 minutes of practice data. When the dress rehearsal was done, I passed around some Argentine empanadas, which we ate on top of that ridge while talking about how great a site this would be for the actual occultation event. 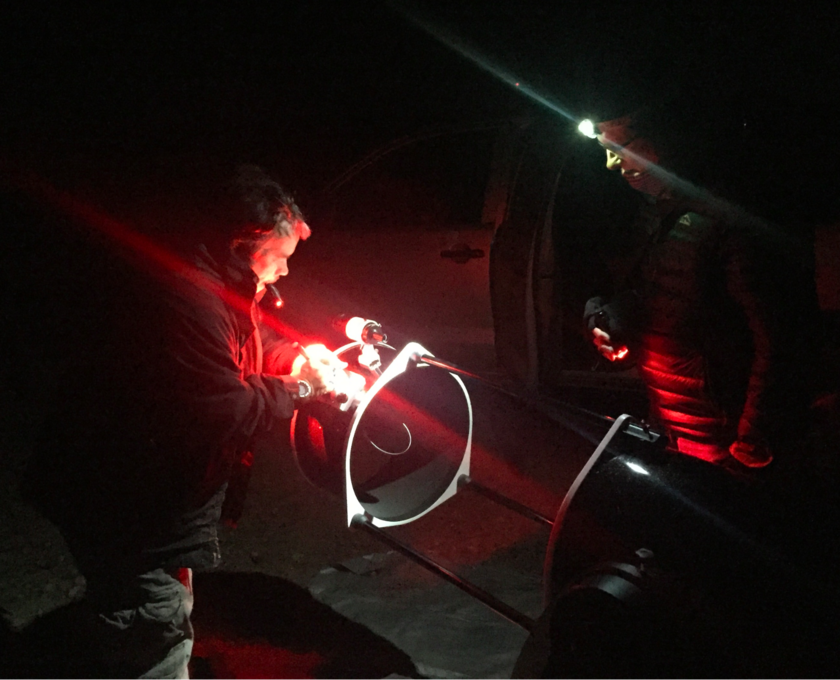 Assembling the telescope on the dress rehearsal night

The next day—the big day—we were told by Marc Buie (the team leader for South America) that we would observe the occultation from a completely different location. “Wait. What?” We liked the site on the ridge, so we had an initial resistance to the change, but that resistance passed quickly. The entire week, Buie had warned us that there would be last minute changes. He and a few other team members were doing their best to optimize the location of each of the 12 telescopes in Argentina while coordinating with the 12 telescope locations in South Africa. It was a tricky problem that was fine tuned right up to Friday afternoon, less than half a day before the occultation event.

The night of the occultation we drove out to our newly assigned site: a campground near a dry river bed just southeast of Mendoza. Again, I was with the same two astronomers and the embassy representative. We quickly scouted the new site and identified a good spot for the telescope. After that, the week of training kicked in. We set up the telescope, aligned it, and found the field were were going to observe. We waited about half an hour, working to keep dew from collecting on the telescope mirrors. At the time set by Buie and his colleagues on the New Horizons team, we started our 45 minute observations. Then we stepped away from the telescope and did nothing.

That’s the challenge to observations: most of the work happens well ahead of the observation event. When it comes time to make an astronomical observation, you ideally want it to be the most boring, mundane moment in the entire process. If you did everything right, you start the observation and let the telescope and camera collect the data. 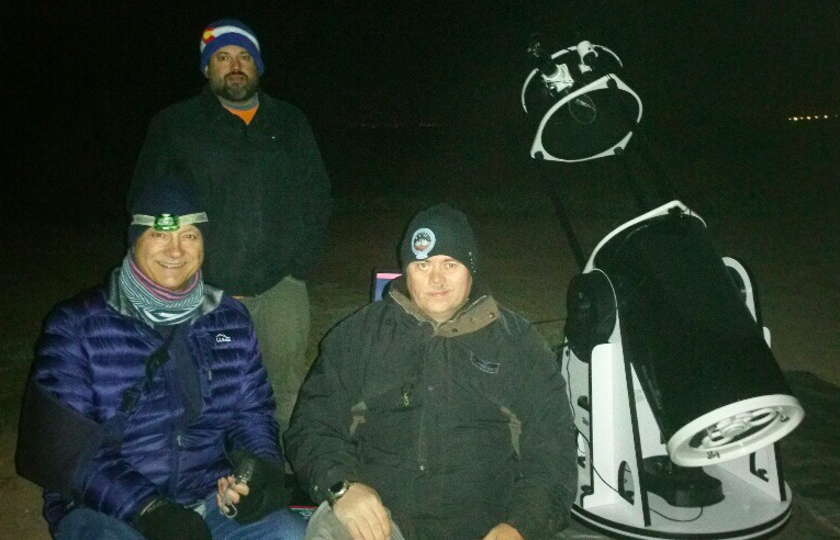 Me and my fellow observers

I am standing in the back, while to the right is the 16 inch telescope used for the observations.

We did everything right, so we stood in the cold night, waiting. I broke out empanadas again (almost always a crowd pleaser) and the experienced astronomers told stories about other campaigns. When the 45 minutes were up, we packed up and went back to our hotel. That was it. Thanks to good luck with the weather, which gave us clear skies all night, we executed our observations successfully. I would later find out that all of the other teams in South America had the same success.

After a week of scouting sites, running down last minute errands and supplies, and practicing late each night, we had observed the MU69 occultation as a team. The team in South Africa also were successful, although they had more challenges and adventures than we did. And the scourge of all astronomical observations—clouds—only affected a handful of sites in South Africa. In all, the occultation observation campaign on June 3rd, which was likely the largest coordinated and deployed campaign of its kind ever, went extremely well. We definitely celebrated the next night. 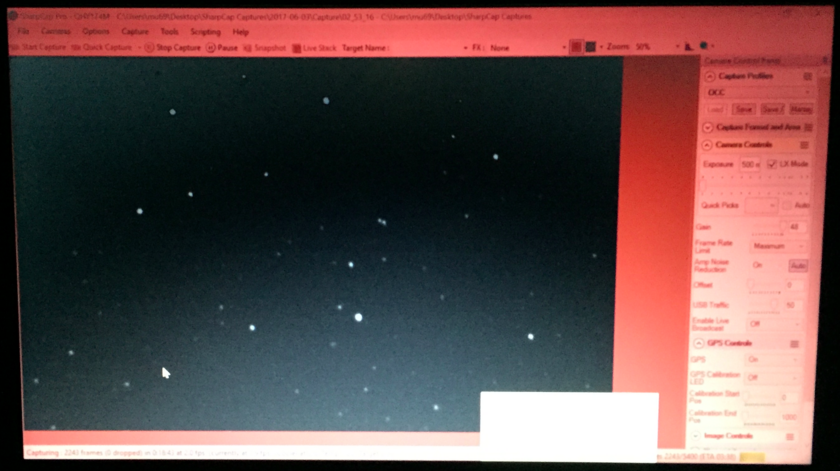 Our view of the star field for the observation

“What about the results? Did you see the occultation?” you ask. Everyone asks this. Right now, we don’t know yet. This was an extremely challenging occultation to observe. MU69 occulted a very dim star, which always makes the observation tough. On top of that, we need to combine data from 24 deployed sites, plus some fixed sites, that cover a wide range of conditions, including seeing and illumination. Therefore, the data analysis will take awhile. It is likely that only a couple of the telescopes actually observed the occultation. All of the data, however, will be useful for the New Horizons mission. All of us—astronomers and the general public—just need to wait until the New Horizons team finishes the analysis and announces the results. I am not a New Horizons team member, so I am eagerly awaiting the results like everyone else. 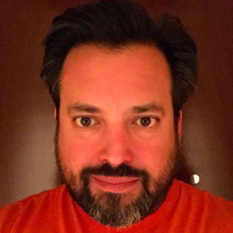 Thanks Alejandro. That was a very enjoyable story. Can't wait for the results. Let's hope MU69 has rings!